Neither the coronavirus pandemic nor worries about election unrest deterred a record-breaking number of voters across the United States from casting ballots in the 2020 presidential election.

As this cycle ends and the post-mortem analysis flies, political strategists on both sides will be absorbing who voted and why, whose support they won or lost — crucial lessons for the next election.

“It turns out that lots of opportunities for people to vote means lots of people voting.”

What have we learned? President Donald Trump’s strategy for discouraging voting by mail did not deliver victory. Black women showed up and threw their support behind former Vice President Joe Biden and his running mate, Sen. Kamala Harris, D-Calif., while white men — and women — remained loyal to Trump. The split between rural and small-town voters versus suburban and urban voters grew. And some Republicans — though a small minority — broke away from their party and its incumbent.

The results showed a nation deeply divided, with Trump supporters echoing the president’s unfounded talk of voter fraud and a stolen election. But a majority of Americans said they were seeking a president who could bring the nation together. 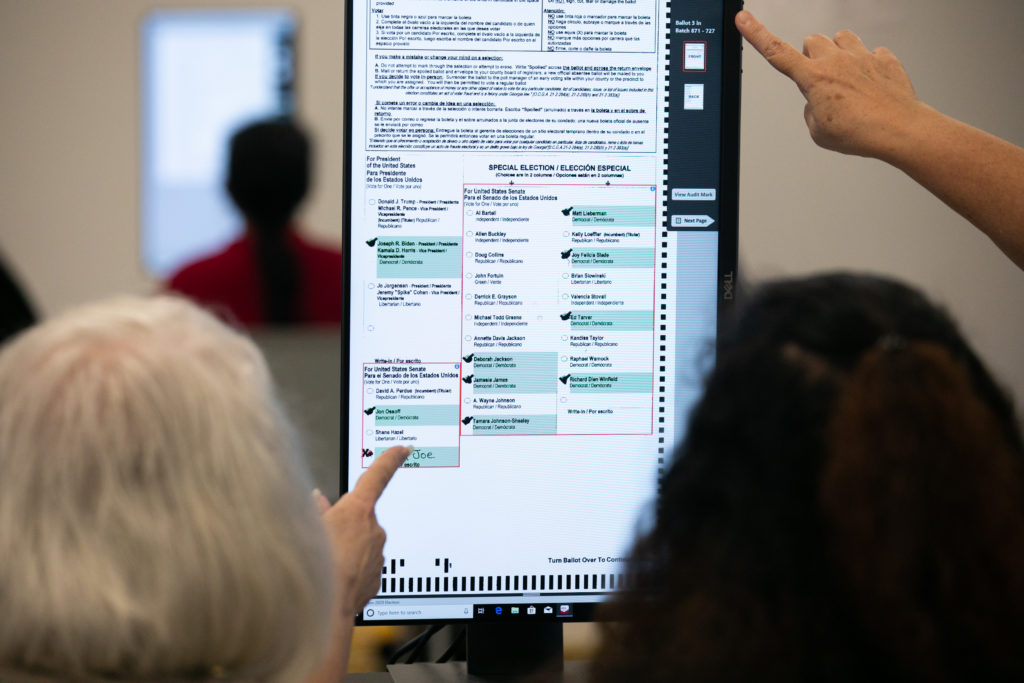 Mail-in ballots and early voting made a difference

The U.S. saw the biggest voter turnout by percentage since 1900, with an estimated 160 million voters participating in this election, and 101 million people voting before Election Day, despite the pandemic — “an extraordinary achievement for American democracy,” said Michael Waldman, president of the Brennan Center for Justice at New York University.

Seventy-one percent of ballot-casters voted by mail or early in person, according to the Associated Press’ VoteCast survey data, with 58 percent of those voting for former Vice President Joe Biden. Another 29 percent of voters went to the polls in person on Election Day, and of those, 65 percent voted for President Donald Trump.

“It turns out that lots of opportunities for people to vote means lots of people voting,” Waldman said. “It doesn’t have a partisan impact.” 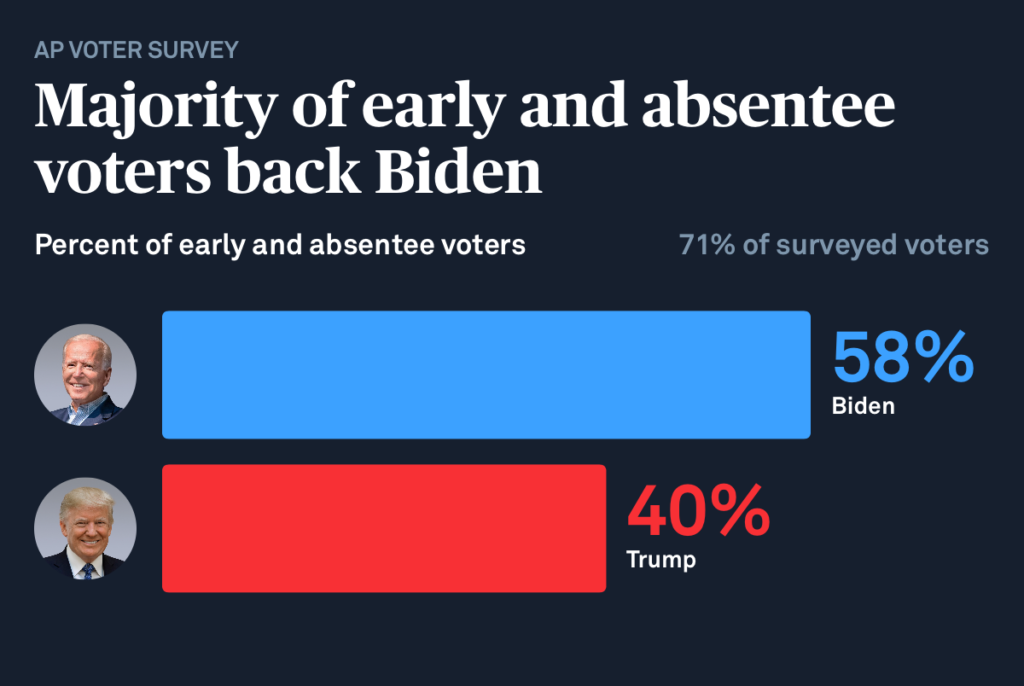 The process that guards American democracy was designed to be boring and bureaucratic, from registering to vote to having your vote counted. But 2020 has been anything but boring. A once-in-a-century pandemic that has killed more than 237,000 in the United States also threatened to compromise the ability to vote. Scheduled primaries in March and April coincided with rapidly spreading cases of coronavirus. Poll workers got sick and couldn’t show up. Polling stations were unexpectedly shuttered.

That’s when state and local election officials, both Republican and Democrat, worked to figure out how to protect voting and public health at the same time. More states expanded measures to allow people to vote ahead of time so that there was not a single-day rush at polling stations.

The higher level of in-person turnout on Election Day among Trump supporters wasn’t surprising. For months, the incumbent launched attacks against mail-in voting at rallies, in speeches and on Twitter, claiming without evidence that these votes were fraudulent. Polling from the PBS NewsHour, NPR andMarist saw a decline in the number of Republicans who said they would vote by mail from 25 percent in September to 20 percent in October.

The president’s tweets and comments did not stop after voting was done — Trump falsely declared himself the winner of the election early Wednesday morning, despite the fact that thousands of ballots were still being counted and several states had not yet announced a winner. He’s said in the days since he will continue to pursue legal challenges over the election results.

Ultimately, it didn’t score Trump the win. In contests where ballot-counting stretched into the weekend, like Pennsylvania and Nevada, a majority of the outstanding votes went to Biden, leading to the announcement of his victory on Saturday. 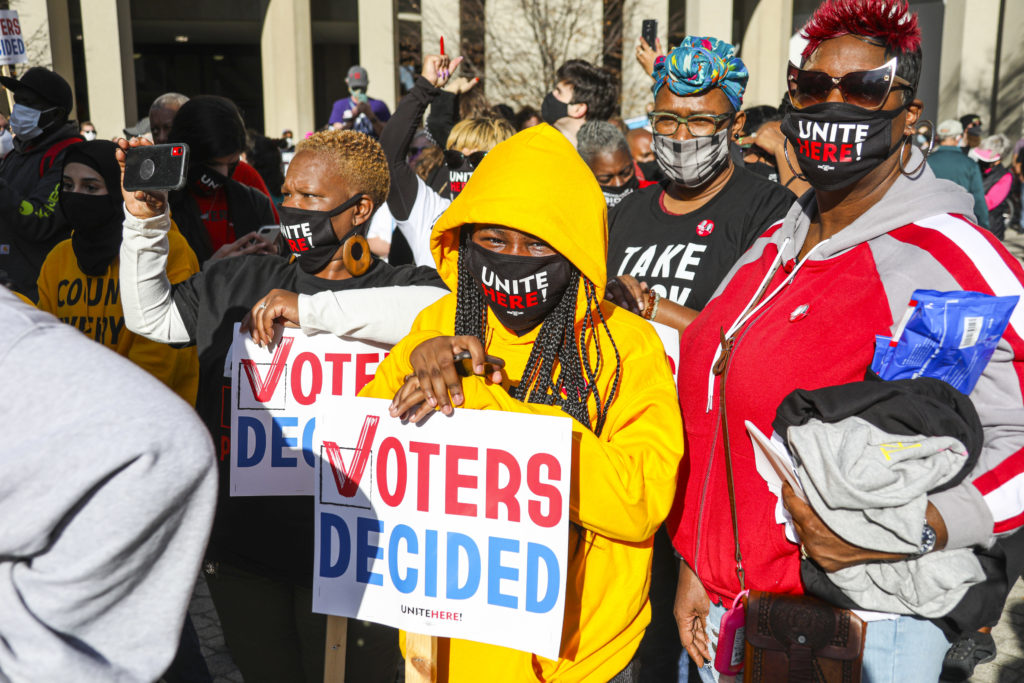 Rallygoers deliver the “Count Every Vote” message in the wake of the presidential election results on Nov. 7, 2020 in Detroit, Michigan. Photo by Scott Legato/Getty Images for MoveOn

The women’s vote and the role of race

When it comes to gender and race, 2020 was a repeat of 2016’s dynamics. Nationwide, the vast majority of Black women who cast a vote in this presidential election — 93 percent — did so for Biden, according to AP’s VoteCast data, along with 66 percent of Latina women. According to 2016 exit polls, 94 percent of Black women and 69 percent of Latina women voted for Democratic candidate Hillary Rodham Clinton — very similar numbers.

Heading into November, there was speculation that more women would turn away from Trump, especially white women, who had helped to elect him four years ago: According to 2016 exit polls, 52 percent of white women had backed Trump. Since then, policies like the separation of families at the border, the administration’s handling of the pandemic and a list of sexual misconduct or assault allegations against the president that grew over the years were seen as likely to turn women away. 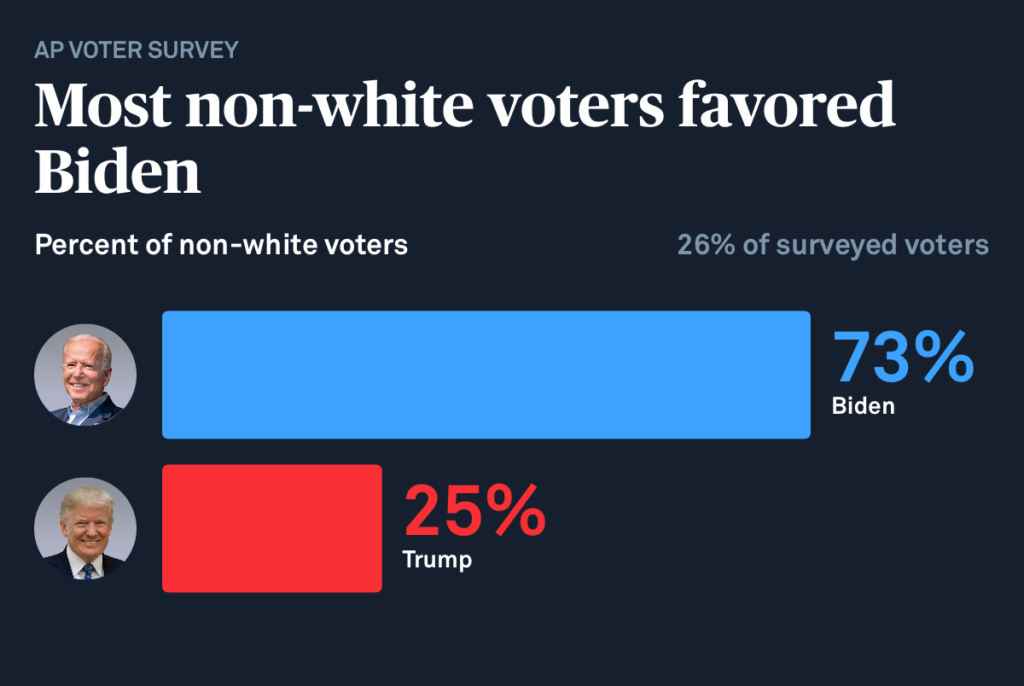 Yet four years later, a majority of white women — 52 percent — again supported Trump, according to preliminary analysis of the AP’s VoteCast survey data, compared to the 78 percent of nonwhite women who backed Biden.

At the same time, more voices rose up to be counted in this election. Following her 2018 defeat in the race to be Georgia’s governor, Democrat and voting rights activist Stacey Abrams and others registered more than 800,000 Georgians ahead of the 2020 election. Following those efforts, nearly a fifth of Georgia voters — 18 percent — who didn’t vote in the 2016 presidential election participated in this one. Of those voters, 59 percent backed Biden.

Congress and state legislatures are slowly becoming more representative of the U.S. with a growing number of newly elected lawmakers who are women, Black, gay or transgender, she said. While awaiting final data to see what actual voting patterns emerge, Goss Graves said, “We’re in a moment where we have an opportunity to redefine who the ‘we’ is in this country, and that does make me a little bit hopeful.” 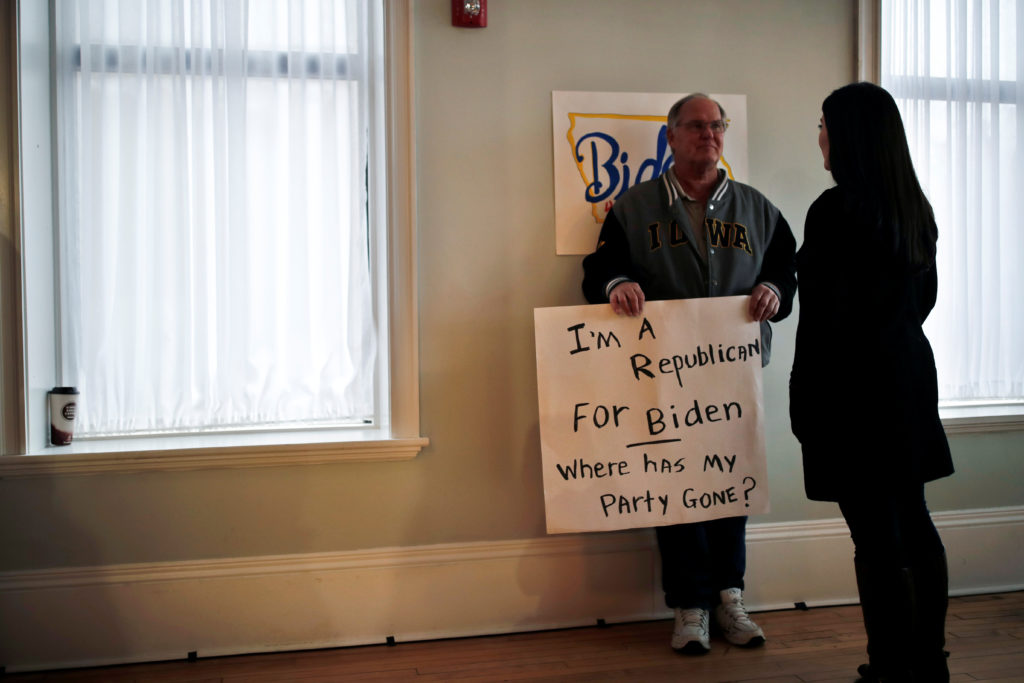 A man holds a sign that reads, “I’m a Republican for Biden, where has my party gone?” during a campaign event for former Vice President Joe Biden in Burlington, Iowa, on Jan. 31, 2020. Photo by REUTERS/Carlos Barria

Nationwide, 8 percent of Republican and Republican-leaning voters supported Biden during this presidential election, according to preliminary analysis of the Associated Press’ VoteCast survey data. In California, one out of 10 conservative voters backed Biden, with similar dissent emerging among Republicans in states like Oregon, Washington, Wisconsin and Michigan. By comparison, 4 percent of Democratic voters cast their ballots for Trump.

That’s not a mass exodus for a president who has enjoyed steadfast loyalty from his base of supporters. It also tracks with the percentage of Republicans who said they voted for Hillary Clinton, according to 2016 exit polling. But more Democrats — 8 percent — chose Trump in 2016 than did this year, and the higher 2020 turnout also means that the number of Republicans who voted against their party grew.

Lifelong registered Republican Valeria Schmitt is one of them. For five years, the 87-year-old has lived in a residential community in suburban Portland, Oregon. This spring, she was unable to visit her husband Jacob, an Alzheimer’s patient, for a month because of the coronavirus pandemic, even though he lived in a building next to hers. In April, she was allowed to see him if she wore a biohazard suit (“I must have looked like a man from outer space,” she recalled), but “by that time, he completely forgot who I was,” she said. He died three days later. 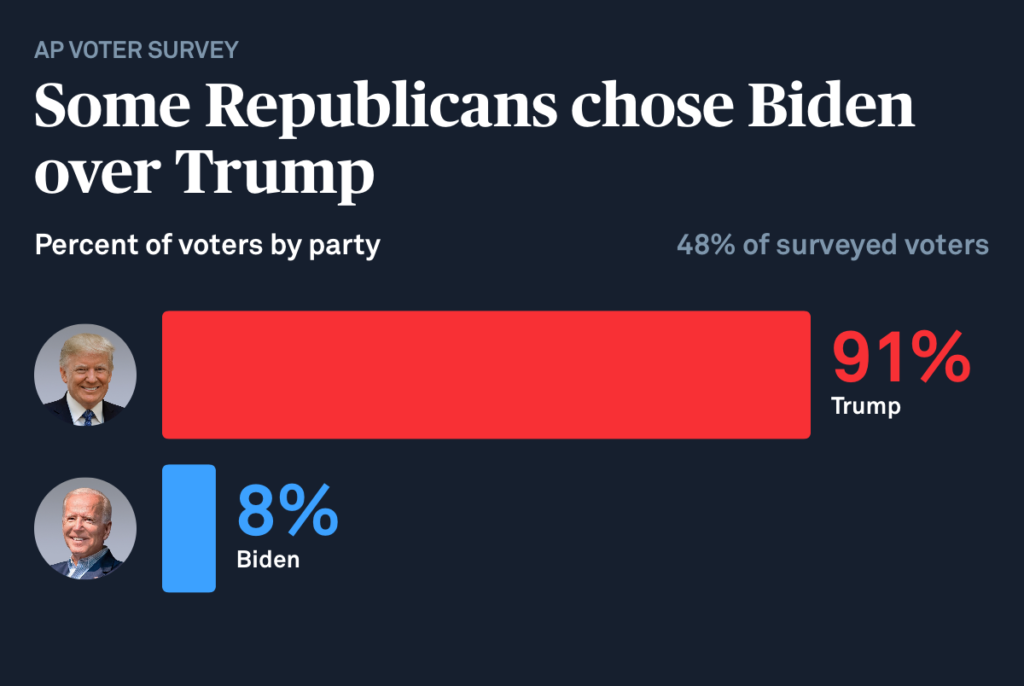 While she doesn’t blame Trump for how the U.S. has fared amid the pandemic, Schmitt said “he definitely did not set a good example on how to handle it” with his cavalier comments and behavior about wearing masks and taking basic public health precautions.

Stevens said that Trump’s racist rhetoric and policies, including the constitutionally fraught travel ban targeting Muslim-majority countries, is one example of how the president doesn’t share the values of most Americans. (According to a February 2017 CNN/ORC poll, a small majority of Americans opposed such a ban.) He added that, nevertheless, the Republican Party didn’t push back on the president.

That’s why Stevens joined the Lincoln Project, a group of anti-Trump Republican campaign consultants and strategists. Their goal was to give Republicans permission to defect against their own party’s presidential nominee and instead vote for Biden, a Democrat. It was a politically painful move for many, but the country was at stake, Stevens said, and so was the party, which by their assessment was headed toward a “death knell” by failing to stand up to Trump or evolve with the country as it becomes younger and more diverse.

“If these guys can peel off 3 percent or 4 percent, that’s going to be serious,” former White House adviser and far-right conservative Steve Bannon told the Associated Press. From Bannon’s lips came the group’s internally stated strategy, Stevens said, to convince as many as 4 percent of Republicans to give their vote to Democrats.

Throughout his time in office, Trump exposed himself to this risk by catering to his base with policies and messages that stoked fear and anger over immigration, racial tensions, police brutality and the fabric of civil society. Shortly after his inauguration, 39 percent of Americans said they approved of his job as president in February 2017, according to Marist polling data. He received his highest job approval rating of 44 percent in July 2019, and by October 2020, that approval rating sat at 41 percent.

According to AP VoteCast data, 96 percent of voters said it was important to them that the next president bring the country together.

Yet, the Lincoln Project’s borrowed strategy and months of anti-Trump ad campaigns may have worked.

Schmitt, who voted for Biden, said she doesn’t trust Trump. To her, the president “doesn’t know the difference between a lie and the truth,” which she sees as “a major flaw.” To Schmitt, Trump “is strictly still in the entertainment business,” and will do anything to boost his following.

“He doesn’t really have principles about what that might entail, and he’s willing to do or say most anything if it’ll get him the most number of votes he wants,” she said.

She wants to see more fiscal conservative policies and tighter budgets, but she doesn’t think Republicans or Democrats care about that. And while she agrees Trump’s third Supreme Court nominee, Judge Amy Coney Barrett, is a good fit for the job, Schmitt is afraid of what might happen if Trump guts the Affordable Care Act. The Supreme Court will hear arguments over whether the health care law is constitutional, a lawsuit the Trump administration supports, on Nov. 10.

More than anything, Schmitt said she wants a more unified country and for people to start “listening to each other.”

The vast majority of Americans want to restore civility, according to the AP VoteCast data, with 96 percent of voters saying it was important to them that the next president bring the country together. Biden has said he would be president for all Americans, not just for those who voted for him. In a few months, that promise will be put to the test.

Left: Thousands of New Yorkers joined the March to Protect the Results, taking to the streets of Manhattan to celebrate the Biden-Harris ticket victory after winning the majority of the Electoral College votes. Photo by Erik McGregor/LightRocket via Getty Images