Legal scholars Wednesday drew opposite conclusions about President Donald Trump’s conduct with Ukraine, underscoring the partisan divide over basic facts surrounding the impeachment investigation as it moves into a critical new phase.

The witnesses called by Democrats in the House Judiciary Committee’s first hearing testified unanimously that the president committed impeachable offenses, while the lone witness called by Republicans said there was not enough evidence to remove Trump from office.

The hearing offered both sides legal arguments to bolster their views, and offered a preview of the highly partisan battle ahead of a possible House impeachment vote.

The impeachment clause of the Constitution says a president (or other federal officer) can be removed from office for “Treason, Bribery, or other high Crimes and Misdemeanors.” The exact meaning of “high crimes and misdemeanors” has been debated ever since. Wednesday, Democrats called on several legal scholars to give a specific definition, and argued the framers’ meaning was clear.

“There’s no mystery about the words high crimes and misdemeanors,” Harvard Law professor Noah Feldman said. The term covers three types of abuses of power by a president: using the office of the presidency for personal gain; to interfere in U.S. elections; and to compromise national security. 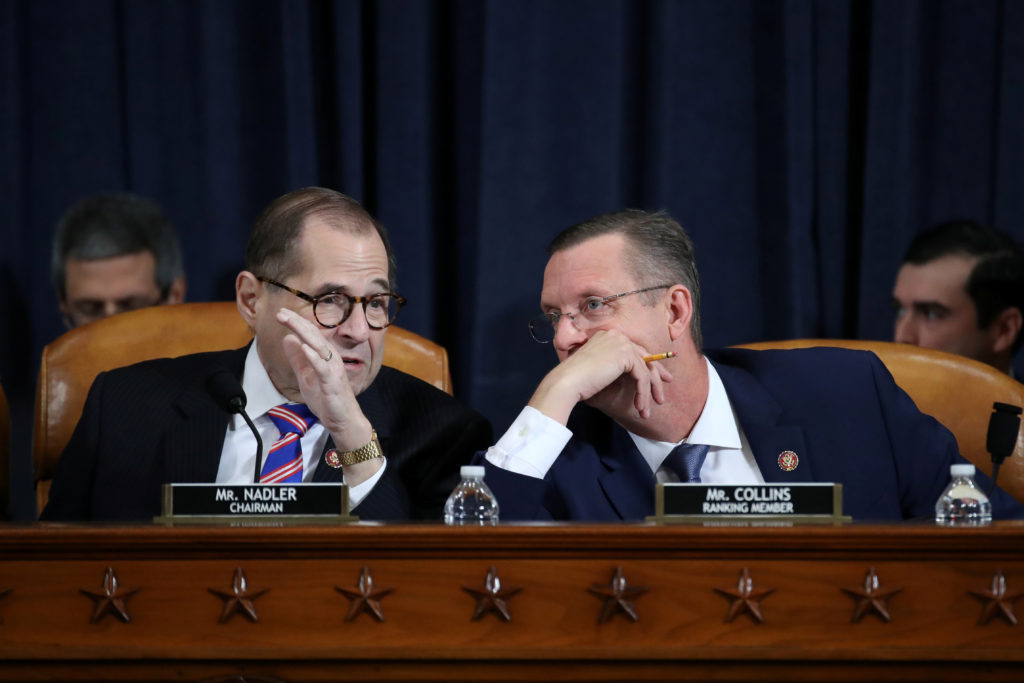 Michael Gerhardt of the University of North Carolina Law School, went a step further in his opening statement. Gerhardt said the evidence compiled by House investigators showed the president “committed several impeachable offenses, including bribery, abuse of power” as well as “obstructing Congress, and obstructing justice.”

Democrats were looking for consensus from legal scholars Wednesday, and that’s what they got — at least from their own witnesses. To Americans who already think Trump should be impeached, the hearing likely cemented their view.

But the Republicans brought their own expert.

George Washington University law professor Jonathan Turley said Trump should not be impeached. Turley argued Democrats did not have a clear-cut case for removing Trump from office, and warned that impeaching him now would lower the threshold for launching future impeachment investigations. “I am concerned about lowering impeachment standards to fit a paucity of evidence and an abundance of anger,” Turley said.

Turley also argued that the investigation was moving too fast. House investigators should gather more facts before rushing to judgement, he said. In order to remove a president from office, Turley said lawmakers need conclusive proof of wrongdoing.

His view echoed Republicans’ criticisms of the impeachment investigation. But unlike House GOP lawmakers, Turley made a point of not ruling out that Trump did something wrong. Proof of a quid pro quo between Trump and Ukraine “might be out there, I don’t know. But it’s not in the record” right now, Turley said.

Turley also made clear that he was not taking sides in the impeachment inquiry. He noted that he voted against Trump in 2016 and was not “a Trump supporter.” The admission bolstered his claim as an impartial observer weighing the facts of the case. Still, Turley appeared as an outlier in a hearing where every other legal scholar drew an opposite conclusion.

Rep. Doug Collins, R-Ga., the top Republican on the House Judiciary Committee, picked up where GOP lawmakers left off in the public hearings last month. Collins called the impeachment investigation a “sham” and “fact-less.” He argued that Democrats began planning Trump’s impeachment the moment he won the presidency.

“You just don’t like the guy. You haven’t liked him since November 2016,” Collins said.

Collins also criticized the Democrats’ timeline for impeachment. Democrats have said they want to finish the process in the House before the end of the year, and could still meet their deadline if they move quickly in the coming weeks. Collins joined Turley in arguing the timeframe did not allow for a fair process for Trump. “The clock and the calendar is what’s driving impeachment, not the facts,” Collins said.

Republicans also interrupted the flow of the hearing by asking for multiple roll call votes on motions that were sure to fail. They interrupted the chairman and other members with questions and parliamentary maneuvers, all of which dragged out the day.

While Republicans slammed the process, they did not offer a substantive defense of Trump’s actions. The strategy followed the approach taken by Republicans on the House Intelligence Committee, who released a report this week finding Trump did nothing wrong.

Democrats signal they will move “swiftly”

Nadler did not announce the committee’s next steps. But he did say Democrats plan to move “swiftly,” a sign the panel could draft articles of impeachment and send them to the House floor as soon as next week, as is widely expected. Nadler defended the timeline, arguing that Trump’s actions represented a “crisis” that need to be dealt with immediately. If the president is not held accountable, Nadler said, Trump would likely again seek foreign interference in the 2020 election.

The New York lawmaker also appeared to signal that the panel was considering including obstruction of justice as one of the articles of impeachment against Trump. Nadler criticized the Trump administration for blocking witnesses from testifying or turning over key documents. “This administration’s level of obstruction is without precedent,” Nadler said.

They may hold additional hearings as well, but Wednesday’s hearing was not must-see T.V. Although all four experts spoke passionately for their positions, the proceedings paled in comparison to the riveting public impeachment hearings last month, which included bombshell, first-hand testimony from several senior administration officials who implicated Trump in an improper pressure campaign against Ukraine. Democrats got the opening testimony they wanted, but they also risked losing public interest in the proceedings.Their own witness, Karlan, stumbled by trying to slam what she saw as Trump’s imperial tendencies, saying he could “name his son Barron but not make him a baron.”

Her comments drew a rebuke in real time on Twitter from first lady Melania Trump. Karlan apologized before the committee, but used the moment to slam the president again.

“I want to apologize for what I said earlier about the president’s son. It was wrong of me to do that,” she said. “I wish the president would apologize, obviously, for the things that he’s done that’s wrong, but I do regret having said that.”

Left: Michael Gerhardt, professor of law at University of North Carolina School of Law, testifies as his fellow witnesses look on during the first House Judiciary Committee hearing on the impeachment inquiry into President Donald Trump on Capitol Hill on December 4, 2019. REUTERS/Mike Segar