Trump asked Americans to believe that the United States has rounded the corner on the coronavirus pandemic, at a time when infections are spiking. The president argued the Affordable Care Act should be “terminated,” laws against illegal immigration should be strengthened, and the country should continue to rely on oil and gas. He repeated his claim that he has done more for Black Americans than any other U.S. president, with the “possible exception” of Abraham Lincoln.

Biden said the pandemic under Trump’s leadership was out of control. He offered to strengthen the ACA with a public option, vowed to protect undocumented immigrants while decrying the Trump administration’s separation of families, and argued that the nation should transition to renewable energy. Biden said Trump is one of the most racist presidents in the history of the country and “pours fuel on every single racist fire.”

Aided by a mute button that cut down the constant interruptions — mostly from Trump — that derailed the first debate, the two candidates were actually able to articulate their positions. The debate may have lacked substantive policy details, but at least it offered a clear contrast.

Here are takeaways from the second and final presidential debate of 2020.

No clear plans for the pandemic

The election is shaping up to be a referendum on Trump’s handling of the pandemic, with voters choosing who they want to be running the government’s COVID-19 response going forward. On Thursday, Trump asked Americans to trust him that the country is on its way to recovery, echoing a promise he’s made for months. “It will go away, and as I say we’re rounding the turn, we’re rounding the corner,” Trump said.

COVID-19 cases are again spiking across the country. Biden responded by reminding viewers that more than 220,000 Americans have died under Trump’s watch, and that the country is headed into the fall and winter without a certain path forward. “I will take care of this. I will end this. I will make sure we have a plan,” Biden said.

But what exactly is that plan?

While many voters already have a clear idea of which candidate they most trust to handle the pandemic, those hoping for clear answers about what comes next were likely disappointed by the debate.

Trump hasn’t given up the idea that there will be a COVID-19 vaccine ready for the public before his first term is up, saying at one point that a vaccine was coming “in weeks” and at another point promising it would arrive “by the end of the year.” He said there would be “100 million vials” on hand, but did not offer a concrete timeline of when the vaccine may become available to a majority of Americans. On the topic of the pandemic, he instead focused more on the need to reopen the economy and schools, without giving details there either, and accused Biden of wanting to shut business down. “All he talks about is shutdowns,” Trump said.

Biden, for his part, vowed that as president he would follow the science and the facts. He said Congress needed to do more to provide economic relief to workers and businesses hurt by the public health crisis, and promised he would “shut down the virus, not the country.” But he  offered few specific details on how his approach might differ from Trump’s.

Each candidate shared more of a general philosophy to his approach rather than a concrete plan. But the debate offered a reminder that whoever is elected, the country faces a significant challenge in the months ahead.

READ MORE: Why Americans have grown more hesitant about the COVID-19 vaccine

A calmer and more focused Trump 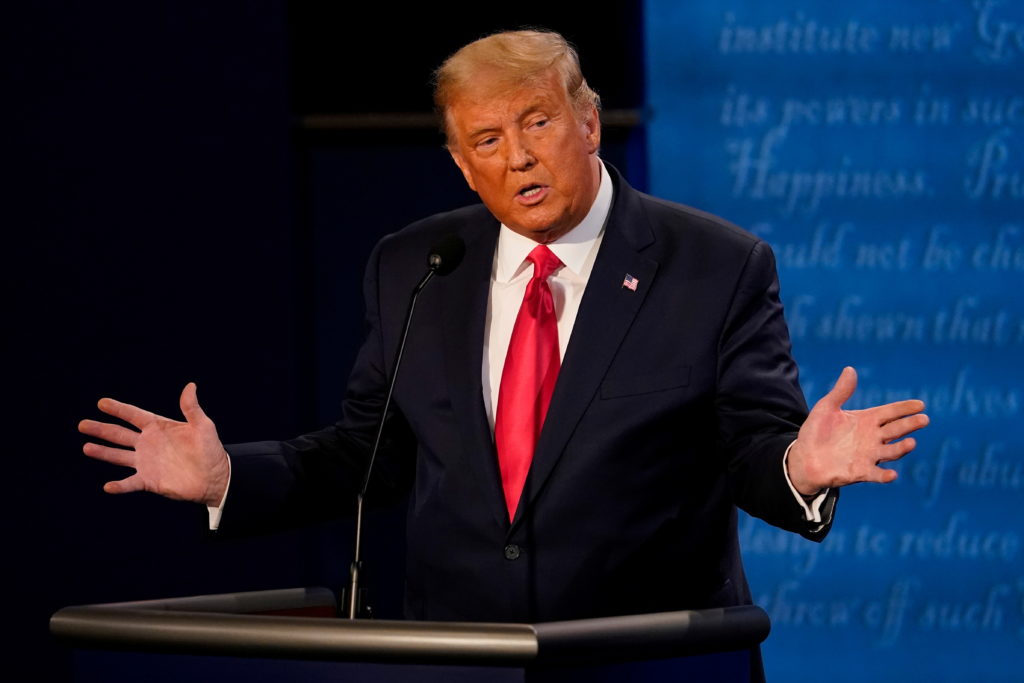 President Donald Trump answers a question during the second and final presidential debate at the Curb Event Center at Belmont University in Nashville. Morry Gash/Pool via REUTERS

After the round criticism of his repeated interruptions in the first debate, the president was far more disciplined about keeping quiet when his opponent was speaking.

That is not to say he never interrupted or talked over Biden or moderator Kristen Welker, but more often than not, when others spoke, Trump stood still. He moved his eyes and sometimes raised his hand to get Welker’s attention or, it seemed, express frustration or disagreement. But he mostly waited to speak.

Why didn’t you get it done?

And when he spoke, the president seemed more prepared with a very clear line of attack: portraying Biden as a man of talk and not action.

“You had eight years,” he said to Biden, referring to his time as vice president under President Barack Obama and asking about the administration’s lack of substantive criminal justice reform in that time. “Why didn’t you get it done?”

There were classic Trump moments in which he rejected criticism by pushing back without offering specific support of his arguments. To accusations that he paid little to nothing in federal taxes in the years leading up to his election, Trump claimed that he prepaid taxes for years — which most Americans do in the form of withholding —  though he did not answer calls to release his tax forms nor did he explain if he received refunds after those prepayments. 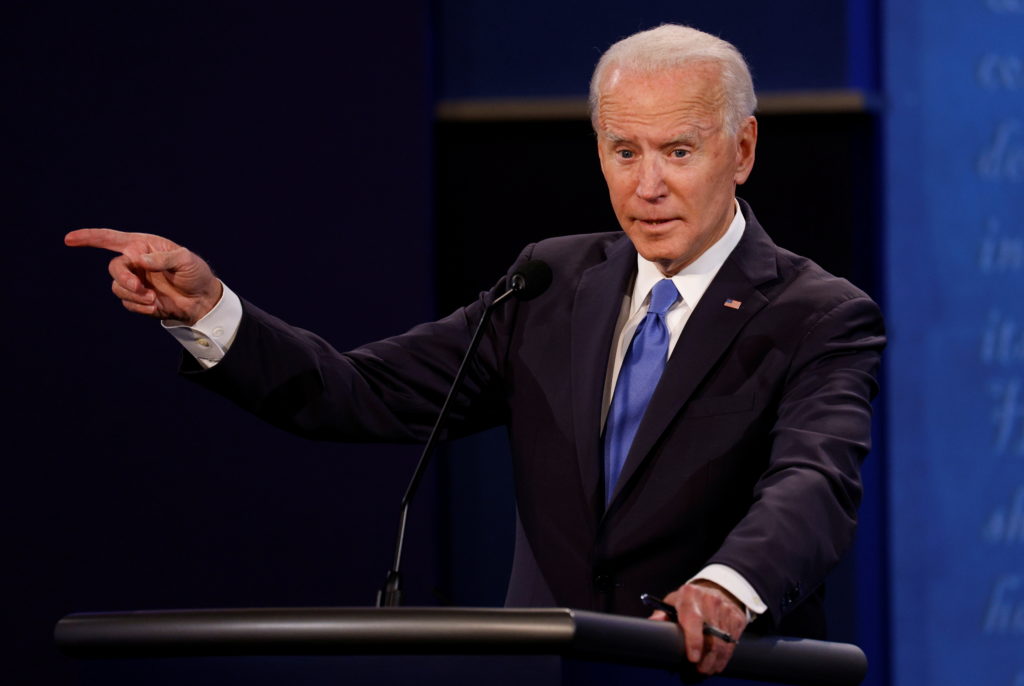 As Trump chose his moments more carefully, Biden was more direct, focused and clear in how he chose his words.

When the president did not directly answer questions, offering vague ideas or deflecting, Biden offered simple and firm statements.

On the environment, Biden said: “Global warming is an existential threat to humanity. We have a moral obligation to deal with it.”.

On race, he said: “The fact of the matter is there is institutional racism in America.”

And on the pandemic economy, he said, looking directly into the camera: “If you’re a middle class family, you’re getting hurt badly.”

Biden had a firm, percussive beat to many of his words, including in his attacks on the president.

Charging that Trump hid the true dangers of the virus, Biden said, “He didn’t want to tell us because he didn’t want us to panic.” Then the former vice president concluded, “Americans don’t panic. He panicked.”

WATCH: What voters think about Trump and Biden’s final debate 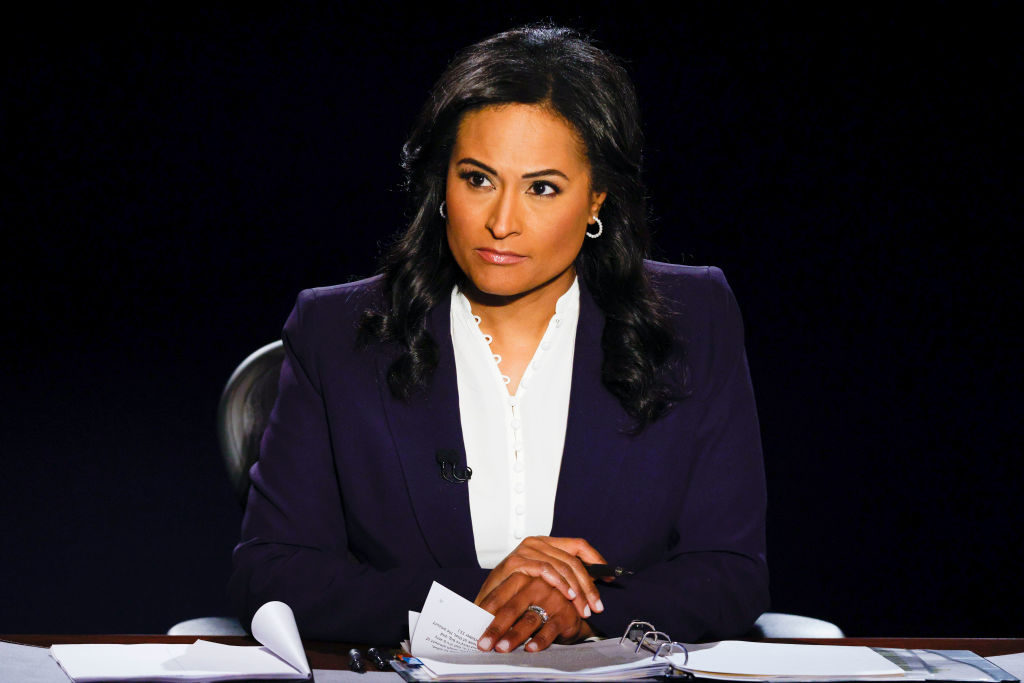 On Thursday, NBC’s Kristen Welker delivered the strongest performance of any moderator in the 2020 cycle — and one of the smoothest in recent memory. Welker was in command from start to finish, rarely allowing the candidates to interrupt each other or stray off the topics she had picked beforehand. Her questions were focused, and resulted in mostly concise answers from Trump and Biden, no mean feat from two figures who love to talk — and get off topic.

Perhaps most importantly, in running a tight ship Welker was able to eliminate the distractions and give viewers a better understanding of the candidates and their visions for the country. She benefited from going last; after the first debate, both Trump and Biden were under pressure to tone it down. And of course Welker was working with new rules, which included muting the candidates’ microphones for portions of the debate. Still, it was an impressive performance that may serve as a model for moderators in the future.

The biggest compliment of the night may have come from Trump himself, who has spent the better part of four years in office criticizing the media — including Welker, ahead of Thursday’s debate.

“By the way, so far I respect very much the way you’re handling this, I have to say,” Trump said. Welker did not respond. When Biden interrupted a moment later, she stopped him and moved on.

Will the debate make a difference? Probably not

Trump and Biden both scored some points that will excite their core supporters, but those voters were already backing the candidates. And for the more than 40 million Americans who have already cast their ballots, this debate won’t factor into their decisions.

The big question going into Thursday’s debate — and every presidential debate, really — was whether the candidates could win over voters who may still be undecided. But with less than two weeks until Election Day, voters are more likely to have made up their minds and by now are familiar with Trump and Biden’s stories and basic positions on key issues, so there was little new information either could provide.

In 2012, Obama delivered a lackluster performance in his first one-on-one with Republican challenger Mitt Romney. But Obama rebounded in the next debate and the underlying dynamics of the race didn’t change. The first presidential debate in 2016 between Trump and Hillary Clinton remains the most watched presidential debate of all time, but that one, too, did not end up shifting the way most voters viewed the candidates.

The debates this cycle followed that pattern. The first debate did not drastically shake up the race, and while the debate Thursday included a few memorable moments, there was nothing earth-shattering enough to suggest either candidate would earn major points for his performance.

WATCH: What voters think about Trump and Biden’s final debate