The PBS NewsHour Weekend special “America in Black and Blue” explores the tensions between America’s diverse communities and their local police forces, the efforts in many communities to find healing, and the delicate balance between essential law enforcement and protecting the civil and human rights of all Americans.

The broadcast draws on recent and upcoming PBS reporting, including FRONTLINE’s “Policing the Police,” the Gwen Ifill special “America After Ferguson”, Charlie Rose’s discussion of policing with Bill Bratton and the forthcoming PBS documentary “The Talk (w.t.),” about the conversation many African-American and Latino parents find necessary to have with their children about interacting with police.

We invite you to share your thoughts on race and policing in America in the comments below, or join the conversation on social media using the hashtag #AmericaBlackandBluePBS

In one week, two black men were killed by police and five Dallas officers gunned down. Mourning the losses and demanding justice, voices are raised across the country.

How can we find common ground? Alison Stewart anchors this one-hour special “America in Black and Blue” from New York.

The segments for this special will be posted and linked below as they become available. 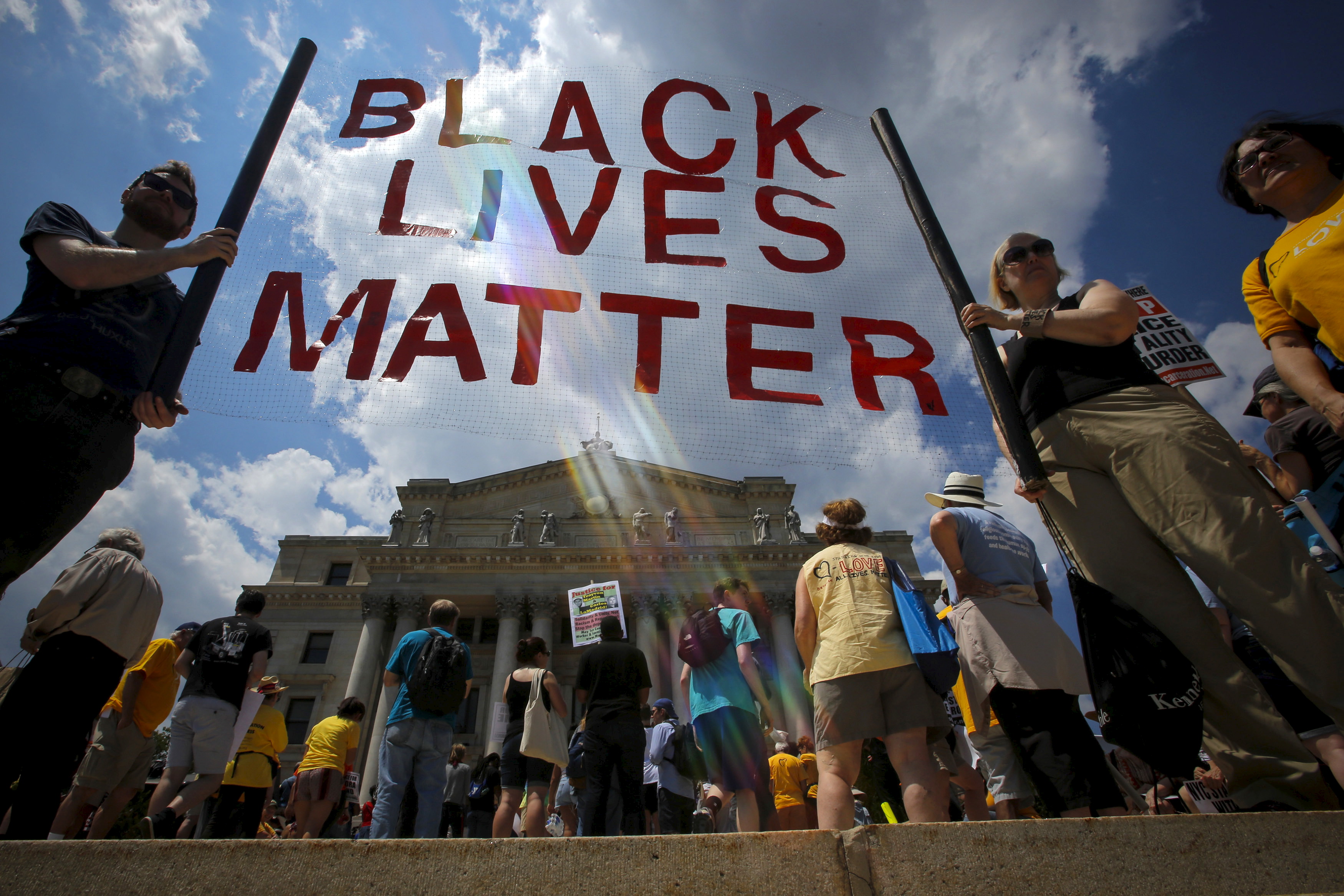 49 years ago in Newark, New Jersey, the city was engulfed in race riots that began when white police officers pulled over and beat a black taxi driver. In the months that followed, protests and riots swept the country. Today, Newark is still struggling, and people are still protesting. New Jersey public television correspondent Michael Hill puts this story in perspective. 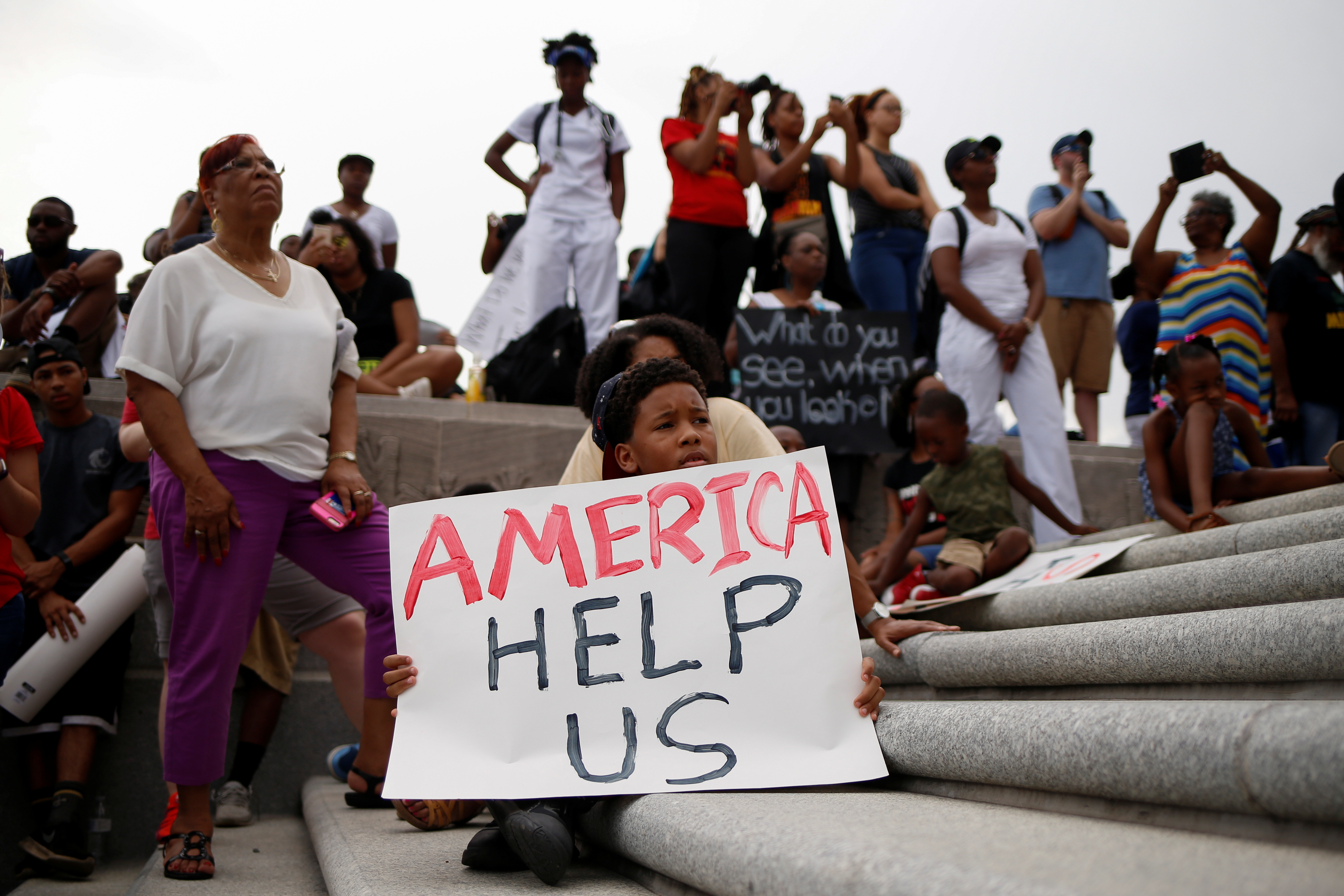 Kerron Stewart, 10, sits with demonstrators on the steps of the Louisiana State Capitol building in Baton Rouge, Louisiana, on July 10, 2016. Photo by Shannon Stapleton/Reuters

Social media has not only changed the way we learn about tragedies, it’s also changed the way we react to them. The conversation many Americans are having about race and policing occupies a space that did not exist barely a decade ago. NewsHour’s Hari Sreenivasan explores the often-unfiltered, sometimes angry and sometimes wonderfully kind world of shared information. 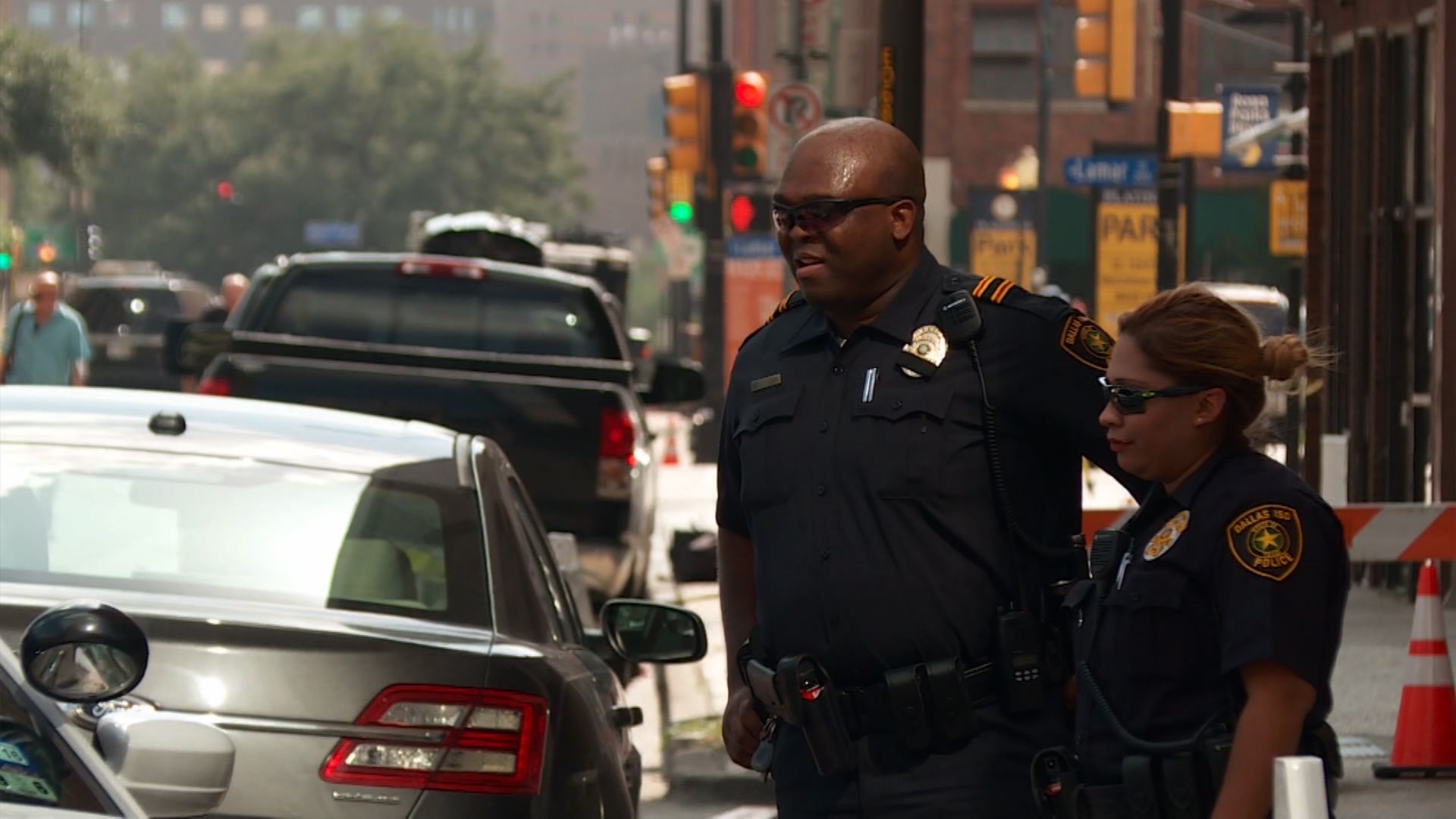 The view from law enforcement

Police Lieutenant Thomas Glover is a 35-year veteran of the force and President of the Black Police Association of Greater Dallas. Glover shared his story just two days after five of his fellow officers were shot and killed by a gunman following a peaceful protest against police brutality. NewsHour Weekend anchor Hari Sreenivasan has this interview with Glover. 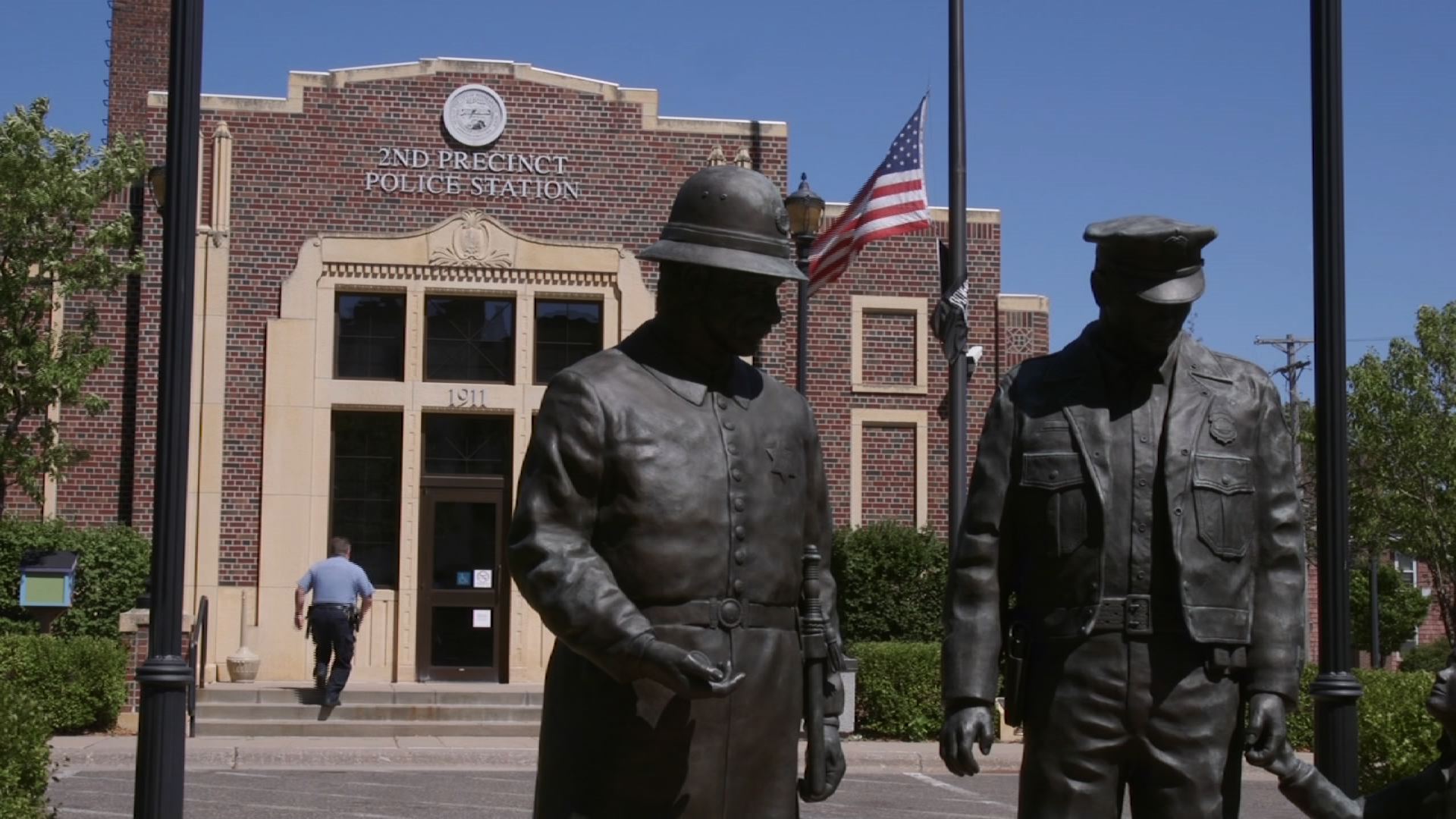 Newshour Weekend special correspondent Chris Bury reports on new efforts in the Twin Cities to make big changes to how and when police interact with residents. In contrast to what’s been called “Broken Windows” policing, there is an organized move to eliminate many low-level offenses. This approach raises the question, “Would many of the police shootings of young men of color happen, if they were never pulled over or stopped in the first place?”

Watch the full report. Plus, for more from FRONTLINE, check out their series “Policing the Police.” 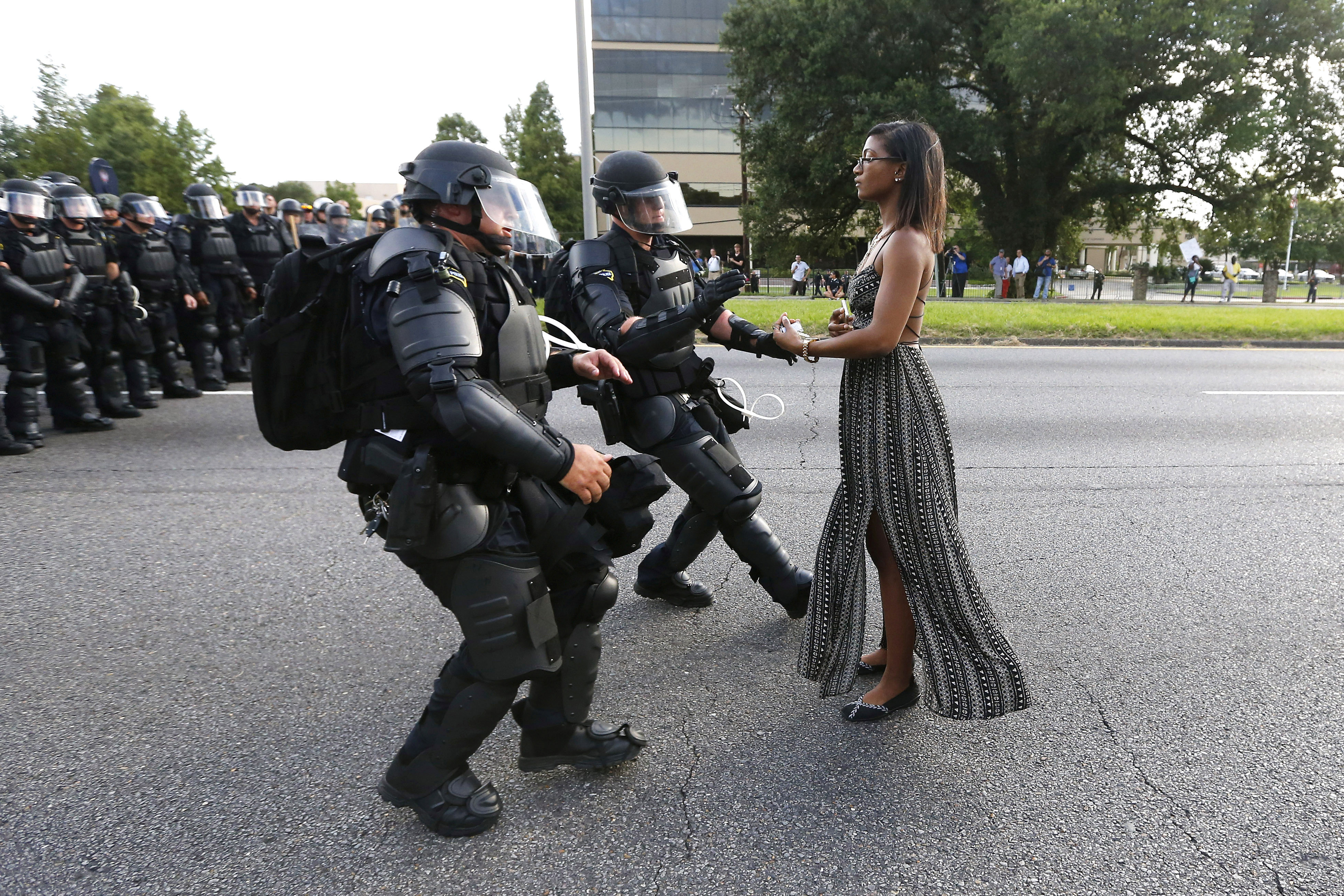 A demonstrator protesting the shooting death of Alton Sterling is detained by law enforcement near the headquarters of the Baton Rouge Police Department in Baton Rouge, Louisiana, U.S. July 9, 2016. Photo by Jonathan Bachman/Reuters

Can the nation find common ground?

Three people with three different perspectives share their thoughts and discuss how we might find common ground on policing, protest and race. Monifa Bandele, senior campaign director of MomsRising.org, journalist Ian Tuttle of the National Review and Marquez Claxton, director of the Black Law Enforcement Alliance participate in this conversation. 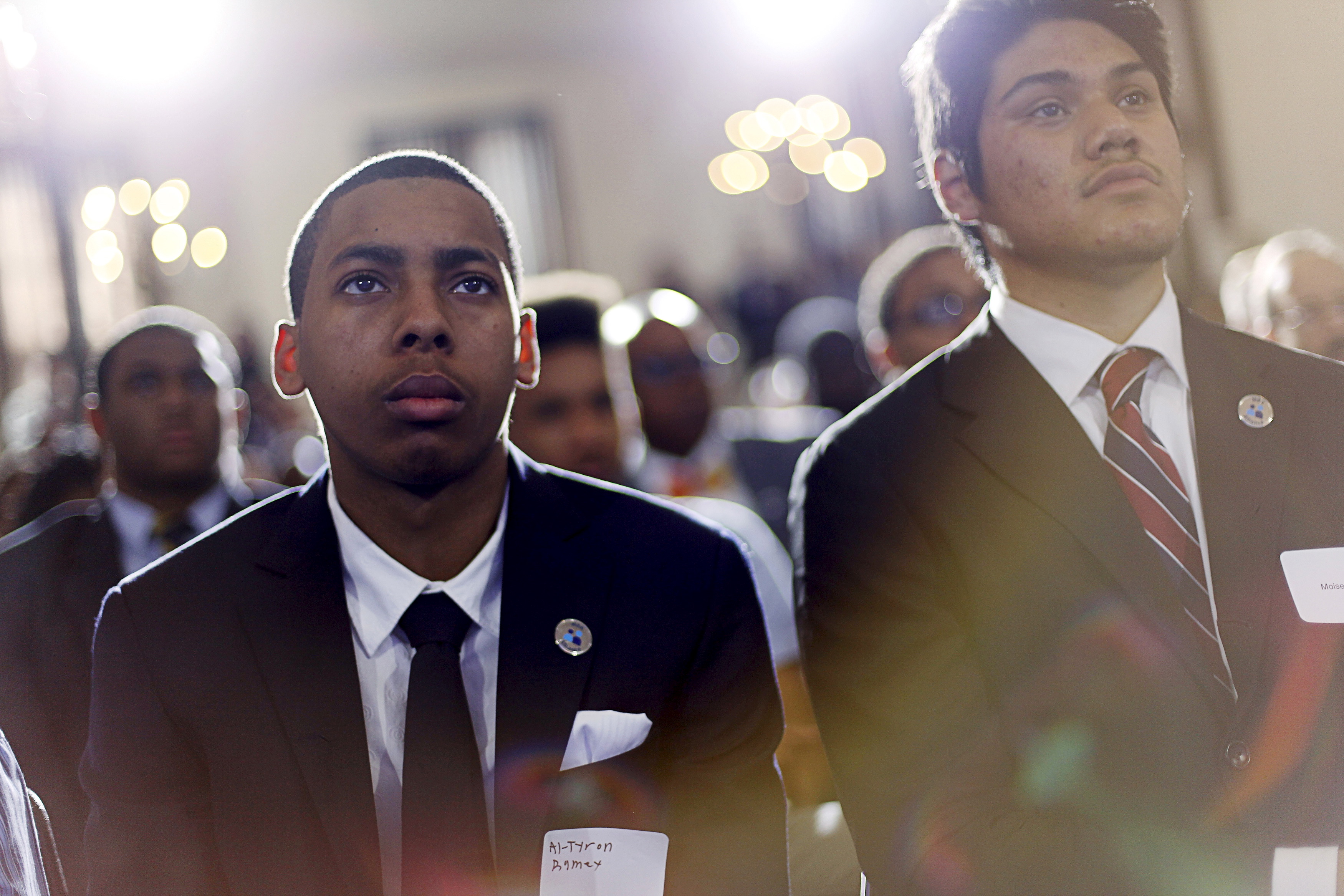 Students listen to remarks by U.S. President Barack Obama at Lehman College in New York May 4, 2015. During his remarks Monday Obama announced the creation of the new nonprofit organization My Brother’s Keeper Alliance to help minority youth. Photo by Jonathan Ernst/Reuters

In 2014, after a white police officer shot and killed Michael Brown in Ferguson Missouri, followed by days of violent protests, the Obama administration launched “My Brother’s Keeper” — a public and private initiative to create opportunities for young men of color and to address their needs. Broderick Johnson, assistant to the President, Cabinet Secretary and Chair of the task force joins us from Washington D.C. to explain what progress has been made and how the administration is planning to respond to demands for more change. 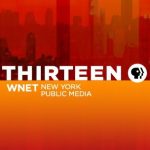 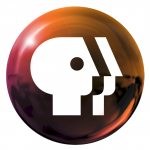 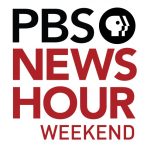