Days into public impeachment hearings, nearly half of Americans want Congress to impeach President Donald Trump and remove him from office, according to a new poll from the PBS NewsHour, NPR and Marist. The latest data does not show a significant change in public attitudes since the hearings began last Wednesday. But this next round of testimony could give Democrats more chances to sway public opinion — unless Americans stick to already rigid partisan lines. 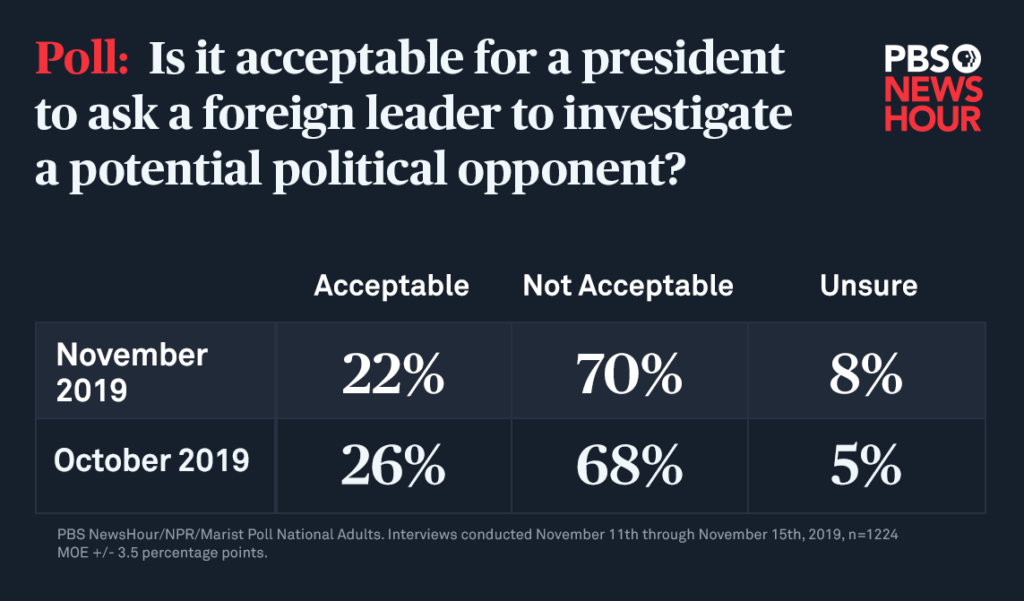 The impeachment inquiry is focused on a July 25 phone call between Trump and Ukrainian President Volodymyr Zelensky. After discussing U.S. military aid vital to Ukraine’s security, Trump asked his Ukrainian counterpart for a favor: to investigate former Vice President Joe Biden, a Democratic presidential candidate in the 2020 election. A whistleblower lodged a complaint about the call, setting into motion the impeachment inquiry unfolding now in the House of Representatives.

Most Americans — 70 percent — said it is unacceptable for a president to ask a foreign country’s leader to help dig up dirt on a possible political rival. That included 95 percent of Democrats, 71 percent of politically independent voters and 37 percent of Republicans. Far fewer respondents — 22 percent — said that behavior is fine, while another 8 percent said they had no clue what to make of it.

Some Republicans think that the president’s conduct related to Ukraine “is not a good thing,” according to Lee Miringoff, who directs the Marist College Institute for Public Opinion. “But it doesn’t rise to the level of an impeachable action” in their views, he added.

So far, three high-level government officials have shared their concerns with lawmakers during televised hearings, including former Ambassador Marie Yovanovitch, who was recalled from her post in Ukraine after an alleged smear campaign led in part by the president’s personal attorney, Rudy Giuliani. This week, eight witnesses are scheduled to testify, including Lt. Col. Alexander Vindman, a decorated Army officer and veteran and the National Security Council’s Ukraine expert who heard Trump’s call with Zelensky.

Republican strategist Rick Wilson said that the American public is “still in the phase of people learning about the story.”

Sixty-four percent of Americans say they are following news about the impeachment inquiry, according to the poll results, with Democrats more likely to say they have kept up with the hearings than Republicans or independents.

Half of Americans said they support the impeachment inquiry. That number is virtually unchanged from a month ago, when 52 percent of U.S. adults said they approved of the inquiry, before it entered its current public phase.

But based on testimony and evidence presented so far, 47 percent of Americans said in the latest poll that they are more likely to support impeachment, while 41 percent said they were less likely to do so.

As time goes on, if public opinion suggests a growing number of Americans think Trump “did something wrong,” Wilson said that “that number creeping up should very much concern the White House.”

Patrick Ghoston, a 27-year-old firefighter and independent voter from West Point, Mississippi, said he does not approve of reports that Trump pressured Zelensky to investigate Biden’s family. Trump has denied those reports.

Ghoston said he was “absolutely uncomfortable” with reports that Trump attempted to use the power of the presidency to benefit himself. Votes in Congress to impeach and remove Trump from office would serve as appropriate punishment for such behavior, Ghoston said.

“It sends a clear message that we were built on a democracy, and that’s where we stand as a country,” he said. Anything less would encourage “future politicians to take this same path if they feel necessary to do so.”

Randy Palmer dismisses the impeachment proceedings as nothing more than overblown political games. A passenger ship captain who now lives in California’s Central Valley, Palmer said he thinks Trump did something wrong, but he does not think the president deserves to be impeached.

“The Democrats are blowing it way out of proportion,” said Palmer, a 60-year-old who said he votes for whomever he thinks is the best candidate. “It seems like it’s party against party. There’s no unity in our country,” he said when discussing the impeachment inquiry.

If the House votes to impeach the president, Majority Leader Mitch McConnell, R-Ky., has signalled that a vote to remove Trump would be a longshot in the Republican-controlled Senate. McConnell on Monday said he “can’t imagine” a scenario in which the Senate votes Trump out of the White House, USA Today reported.

Presidential historian Jeffrey Engel said he has watched news coverage of Trump’s impeachment proceedings, and the levels of partisanship on display on Capitol Hill and across the country tell him one thing: “We’re screwed.”

To Engel, who founded and directs the Center for Presidential History at Southern Methodist University in Dallas, it is troubling that people would rather protect their party than hear information that might challenge their political allegiances.

In the weeks leading up to President Richard Nixon’s resignation in 1974, Engel said Republicans were supportive until the Supreme Court ordered the release of tapes that revealed Nixon’s knowledge of and conspiring in the break-in of the Democratic National Committee’s headquarters at the Watergate Hotel. Within days of tapes going public, support for Nixon in the Senate, and among voters evaporated, Engel said.

Echoing McConnell’s sentiment, this poll found that nearly two-thirds of Americans — 65 percent — said they cannot imagine any revelation that could surface during Trump’s impeachment inquiry that would change their opinion.

Left: Most Americans -- 70 percent -- said it is unacceptable for a president to ask a foreign country’s leader to help dig up dirt on a possible political rival, according to a new PBS NewsHour/NPR/Marist poll. Photo by REUTERS/Leah Millis