President Donald Trump set off plenty of reactions like that when he peddled a baseless conspiracy theory about an activist who landed hard on the ground, and then in intensive care, in what prosecutors call an assault by police.

Trump’s week of law and order rhetoric came with heavy doses of misinformation as he stretched to blame unrest on radical leftists and to put three loaded words — “defund the police” — in the mouth of a Democratic rival who doesn’t support them.

Meantime, the coronavirus pandemic is still growing in nearly half the states. Trump and his aides said little about it except to keep up the push to reopen the country. The United States surpassed 2 million COVID-19 cases in the past week; more than 114,000 have died from it in this country.

A look at some claims and reality:

TRUMP: “Buffalo protester shoved by Police could be an ANTIFA provocateur. 75 year old Martin Gugino was pushed away after appearing to scan police communications in order to black out the equipment. @OANN I watched, he fell harder than was pushed. Was aiming scanner. Could be a set up?” — tweet Tuesday. 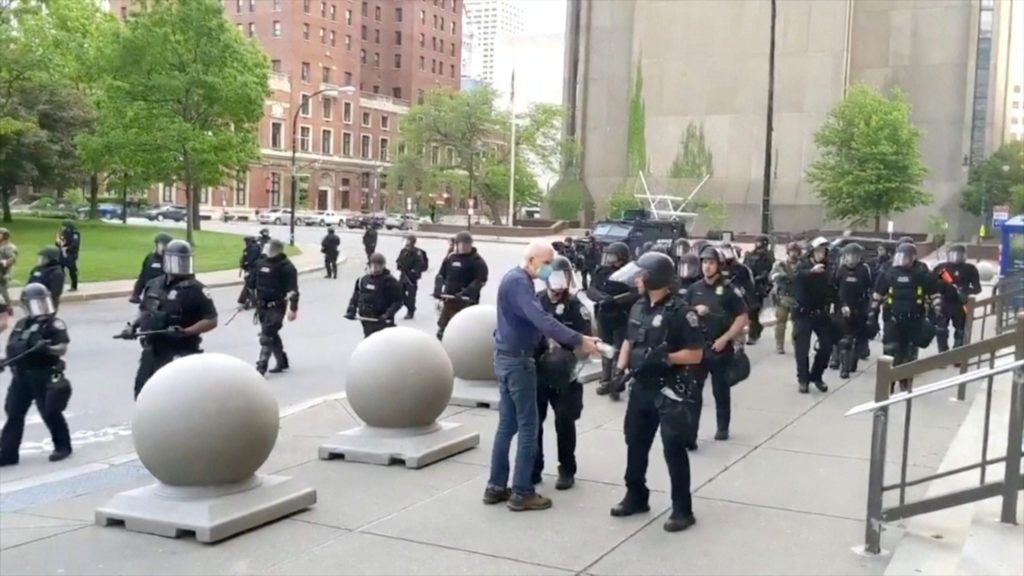 An elderly man approaches riot police during a protest against the death in Minneapolis police custody of George Floyd, in Buffalo, New York, U.S. June 4, 2020 in this still image taken from video. Photo provided by WBFO via REUTERS TV

THE FACTS: There’s no evidence that Gugino was an “ANTIFA provocateur” or that he was trying to “black out” police equipment. And Trump doesn’t explain the physics behind his theory that Gugino fell harder than he was pushed.

Trump referred to a report from the One America News Network, which cited an uninformed blog arguing that Gugino was using antifa-like tactics, such as “a method of police tracking used by Antifa to monitor the location of police.”

It is possible to disrupt police radio — an illegal action often called “jamming” — but hackers do that by attacking receiving stations, not with handheld devices that target an individual police officer’s radio, Matt Blaze, a professor of computer science and law at Georgetown University, told The Associated Press.

“Any radio system is subject to interference, but it doesn’t work by pointing some sort of ray gun and interfering,” Blaze said. “That just doesn’t make any sense.”

Gugino was hospitalized in the intensive care unit last weekend after being pushed by police. He was seen bleeding from his head as officers walked away. Friends say he’s a retiree and a veteran peace activist — not an “antifa provocateur.”

Two Buffalo, New York, police officers have been charged with second-degree assault. The officers, who could face prison sentences of up to seven years if convicted, pleaded not guilty.

Many Republican lawmakers averted their eyes, as is typical with Trump’s rawest provocations. But for the wavering Republican Sen. Lisa Murkowski of Alaska, it was another thing to consider as she mulls over whether she will support him in the election. “Oh lord,” she said when shown the tweet. “Ugh.” She added: “Again, why would you fan the flames? That’s all I’m going to say.”

New York Gov. Andrew Cuomo had more to say: “How reckless, how irresponsible, how mean, how crude.” He implored Trump to “show some decency. Show some humanity. Show some fairness.” Like Murkowski, he spoke of flames being fueled. 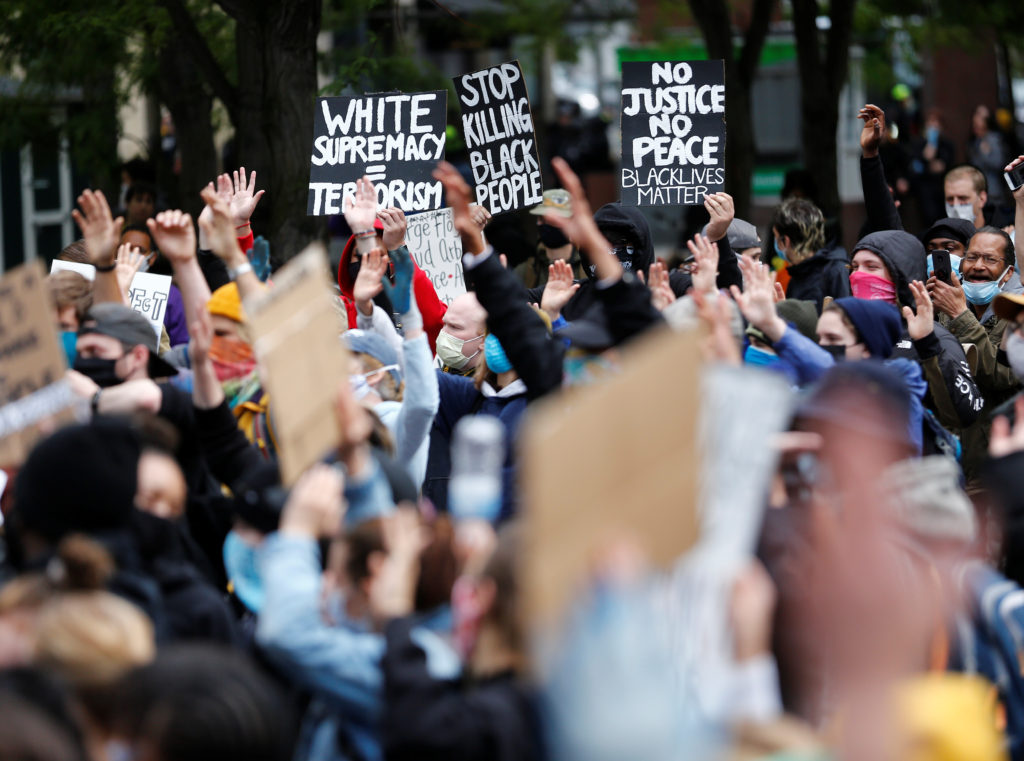 People chant and hold signs at Westlake Park during a protest against the death in Minneapolis police custody of George Floyd, in Seattle, Washington, U.S. May 31, 2020. Photo by Lindsey Wasson, Reuters.

THE FACTS: No they haven’t.

After days of violent confrontations with protesters, Seattle police largely and temporarily withdrew from several city blocks and boarded up a precinct station, leaving protesters to set up a festive scene with speeches, activism, art and music. This was far from taking over a city, and authorities do not consider the protesters to be terrorists.

As Trump has branded protesters “radical-left, bad people” engaging in domestic terrorism, he has frequently invoked “antifa,” an umbrella term for leftist militants bound more by belief than organizational structure. Federal officials have presented scant evidence that such radicals were involved.

Some Democrats initially tried to blame out-of-state far-right infiltrators for unrest before backing down on that claim.

The AP found that the great majority of people arrested in Minneapolis and the District of Columbia in one weekend of protests were local residents and few were affiliated with organized groups.

THE FACTS: No, Biden does not join the call of protesters who demanded “defund the police” after Floyd’s killing.

“I don’t support defunding the police,“ Biden said Monday in a CBS interview. But he said he would support conditioning federal aid to police based on whether “they meet certain basic standards of decency, honorableness and, in fact, are able to demonstrate they can protect the community, everybody in the community.”

Biden’s criminal justice agenda, released long before he became the Democrats’ presumptive presidential nominee, proposes more federal money for “training that is needed to avert tragic, unjustifiable deaths” and hiring more officers to ensure that departments are racially and ethnically reflective of the populations they serve.

That adds up to more money for police, not defunding law enforcement.

ATTORNEY GENERAL WILLIAM BARR, citing escalating protests outside the White House following George Floyd’s May 25 death in Minneapolis: “The things were so bad the Secret Service recommended the president go down to the bunker.” — Fox News on Monday.

THE FACTS: Here Barr is fact checking the president, who claimed a week earlier that he only visited the White House bunker to inspect it, not out of concern for his safety.

“I went down during the day, and I was there for a tiny little short period of time, and it was much more for an inspection,” Trump told Fox News on June 3. “They said it would be a good time to go down — take a look because maybe sometime you’re going to need it.”

News organizations, including the AP, had reported that Secret Service agents rushed Trump on May 29 to a White House bunker, where he spent nearly an hour — not just a “tiny little short period of time” — as demonstrations outside the executive mansion intensified. The bunker is designed for use in emergencies such as terrorist attacks.

Trump had been unhappy with news coverage revealing that he had been spirited to the bunker, believing that it made him appear weak. 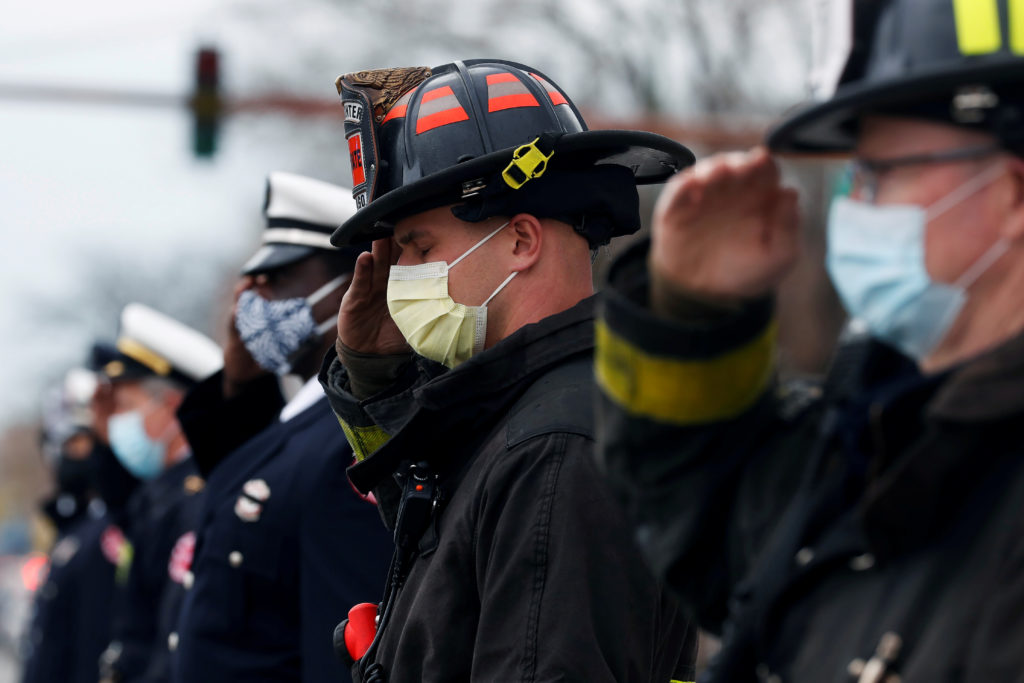 Chicago firefighters salute the funeral procession on April 22, 2020 that carried the remains of a 33-year veteran of the Chicago Fire Department who died from complications of COVID-19. Photo by Shannon Stapleton, Reuters.

TRUMP, on veterans health care: “Before I came here, the vets would wait on line. … And for years and years, they’ve been trying to get Veterans Choice. … Now, most importantly, we take care of our vets.” — Meeting with pastors, law enforcement officers and others in Dallas on Thursday.

THE FACTS: That is the latest iteration of his frequently told false claim to have achieved Veterans Choice when other presidents couldn’t. President Barack Obama achieved it. Trump expanded it. The program lets veterans, under certain conditions, get private health care at public expense. It has not eliminated waits for care.

TRUMP: “This year has seen the lowest crime numbers in our Country’s recorded history.” — tweet Monday.

THE FACTS: Not so. First, this year’s numbers are not compiled. Also, FBI statistics show the violent crime rate was lower in 2014 than in 2018, the most recent year recorded. Also, crime overall was substantially lower in the 1950s and 1960s, grew after that and has been on a downward trend since the 1990s, with variations along the way.

Left: Police officers are seen amid tear gas as protesters rally against the death of George Floyd in Minneapolis, Minnesota. Photo by Photo by Leah Millis