By refusing to go along with the then-president’s unconstitutional push to overturn the results of the 2020 election, Pence became a leading target of Trump’s wrath and a pariah in many Republican circles.

But the final weeks of this year’s intensely competitive midterm elections suggest that the former vice president’s fortunes have shifted as he lays the groundwork for his own potential 2024 White House campaign. The man who was booed last year at a conservative conference is now an in-demand draw for Republican candidates, including some who spent their primaries obsessively courting Trump’s endorsement, in part by parroting his election lies.

Pence has traveled the country, holding events and raising millions for candidates and Republican groups, including signing fundraising solicitations for party committees.

For some campaigns in tight races, Pence is seen as something of a neutralizing agent who can help broaden their appeal beyond Trump’s core base of support. That’s the case in Arizona, with a critical Senate race this year and where the 2024 presidential campaign will be hotly contested. Last week, Pence endorsed Senate nominee Blake Masters, who has struggled to pivot from the primary and win over moderates in a state where one-third of voters are registered independents.

“He takes a little bit of the edge off Masters with a lot of voters,” veteran GOP strategist Scott Reed said. “You know Masters is new to this, first-time candidate, said some silly things he probably regrets during the campaign. But now it’s all about undecided voters in Maricopa County. There’s not a lot more science behind this.”

The endorsements can seem jarring given that Pence has spent much of the past year pushing back on Trump’s election lies, which spurred the violent mob that descended on the Capitol on Jan. 6 while Pence was trying to preside over the formal congressional certification of Joe Biden’s election victory. Pence and members of his family had to be rushed to safety and were held for hours in an underground loading dock as the marauders roamed the building’s hallways. Some rioters chanted “Hang Mike Pence!” and erected a makeshift gallows outside.

READ MORE: What we know about how Pence’s day unfolded on Jan. 6

Pence agreed to endorse Masters even though Masters, during the primary, baselessly denied the 2020 election results. Masters recorded a video in which he said he thought Trump had won and claimed on his website that “if we had had a free and fair election, President Trump would be sitting in the Oval Office today.” 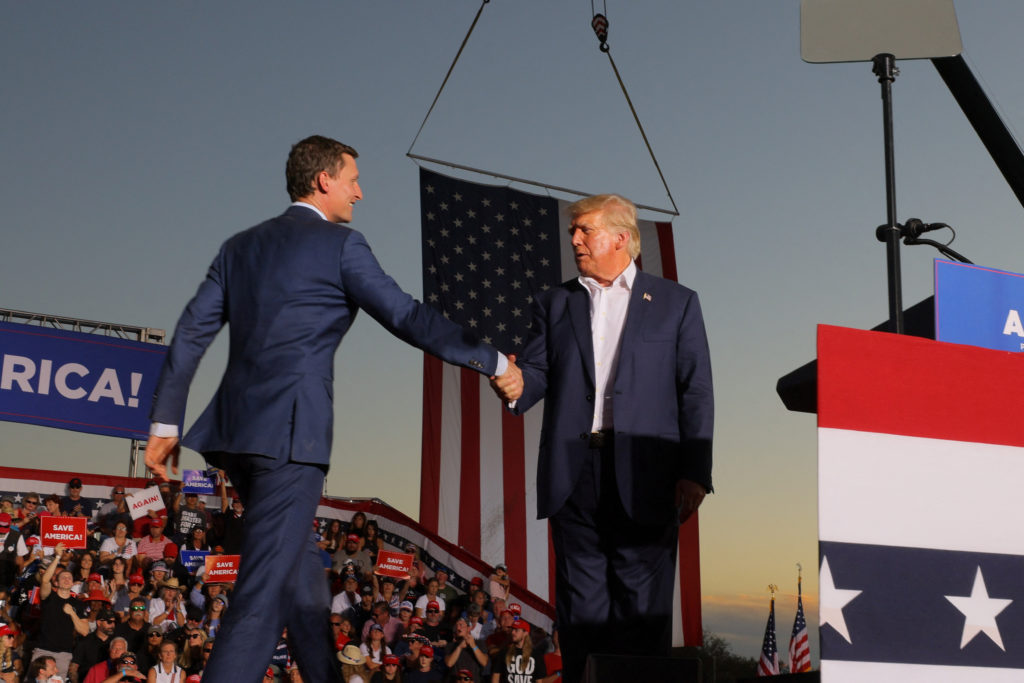 Trump endorsed Masters in June, saying in a statement: “Blake knows that the “Crime of the Century” took place, he will expose it and also, never let it happen again.”

Pence made no mention of that in Phoenix on Tuesday.

The former vice president, along with Masters and Arizona Gov. Doug Ducey, took just three questions, two of them from conservative websites. When a television reporter noted that Masters has questioned the 2020 election, a spokesman for Masters cut him off before he could finish his question.

Masters is not the only election denier Pence has endorsed or assisted.

Two days after the Masters event, Pence was in Georgia headlining a fundraiser for Burt Jones, the nominee for lieutenant governor. Jones not only embraced Trump’s claims of widespread election fraud and called for a statewide investigation into the 2020 race, but he also signed on to be one of his state’s fake alternate electors — a scheme now under criminal investigation.

WATCH: A look at Georgia’s biggest races ahead of the midterms

Last month, Pence was in New Hampshire for Senate nominee Don Bolduc, a retired Army general who also spent his primary campaign telling voters the race was stolen from Trump.

Marc Short, a longtime Pence adviser, declined to set a red line for candidates Pence would and would not endorse.

“It’s more about making sure that he’s being a team player where he needs to be,” Short said. “I think as a lot of these candidates look to solidify the party behind them, Pence can be helpful.”

There is no evidence of any widespread fraud or manipulation of voting machines in the 2020 election, underscored by repeated audits, court cases and the conclusions of Trump’s own Department of Justice. Still, support of false election claims run deep among GOP candidates this year.

The Masters endorsement notably came days after a debate in which he made headlines for seeming to have shifted from his most outrageous rigged election claims. Masters instead blamed Trump’s loss on “big tech,” “big media” and the FBI, and under repeated questioning, acknowledged he hadn’t seen evidence the vote count or results were manipulated, as Trump has claimed. (After the Pence visit, Masters told Fox News he stood by what he had said on his now-modified website, adding: “I think if everyone followed the law, President Trump would be in the Oval Office.”)

Short said Pence was happy to support candidates who had moved past 2020, as the former vice president has urged the party to do.

“If people sort of acknowledged a mistaken position before, he certainly wants to reward that,” Short said. “I think he wants to help conservatives first and foremost, but if people who were elected are now adopting new position about the events of Jan. 6,” Short said, “then that’s a positive.”

Jones and Bolduc have also tried to distance themselves from their previous statements.

In interviews, Jones has tried to play down the fake elector slate as a “procedural move,” while noting that voters rarely mention the 2020 race.

“Look he’s been consistent that he does not believe the 2020 election was rigged. He said that Joe Biden is president,” said Jones campaign spokesman Stephen Lawson, who noted that Pence and Jones have a long-standing relationship and, like Masters, share former Pence staff.

“For us, it was sort of a no-brainer because the vice president’s still very well liked in Georgia, very well received. And we’re in that final stretch where any Republican coming to raise money, support, is a value add,” he said.

“I think it’s certainly a nod to more mainstream kind of moderate Republicans. I think that’s a fair assessment,” he said.

Bolduc claimed throughout the primary race that the 2020 election had been stolen. During a debate, he proclaimed that “Trump won the election, and damn it, I stand by” and adding, “I’m not switching horses, baby.”

But right after the GOP primary — and a day after appearing with Pence — he told Fox News it was time to move on. “You know, we live and learn, right? And I’ve done a lot of research on this and I’ve spent the past couple of weeks talking to Granite Staters all over the state from every party. And I have come to the conclusion, and I want to be definitive on this: The election was not stolen,” Bolduc said. He described Biden as “the legitimate president of this country.”

(Earlier this month Bolduc changed his position again, saying he wasn’t sure what happened with the election. “I can’t say that it was stolen or not. I don’t have enough information.”)

Reed, the party strategist, said he understood the rationale behind Pence’s endorsements.

“He’s a big picture party guy. And it doesn’t surprised me that he’s hustling as hard as he is for people who may not be 100% Pencers,” he said. “By doing these kinds of events,” he added, “they’re going to take another look at him if he decides to run.”

Pence’s political future is an open question. Trump, who is widely expected to run again, remains deeply popular with Republican primary voters and would almost certainly be an early front-runner for the 2024 nomination. Pence has said his own decision about running will not be influenced by Trump, though allies often voice skepticism that Trump ultimately will end up on the ballot.

WATCH: Brooks and Capehart on the Jan. 6 subpoena of Trump and what’s at stake in the midterms

Beyond his endorsements, Pence has spent his time since leaving office performing a careful balancing act. He has distanced himself from Trump’s most corrosive statements while promoting what he calls the Trump-Pence agenda. Pence, like generations of could-be candidates, has used the primaries as an opportunity to forge new relationships and build goodwill, and continues to align himself with conservative causes. His trips often include college visits and speeches before anti-abortion groups.

Other potential 2024 candidates have campaigned for the Republican cause, including Texas Sen. Ted Cuz, who is on a monthlong, 17-state “Take Back America” bus tour. Trump has held rallies and finally begun spending a small part of his vast political fortune to help his favored candidates.

“I think he and all these guys are out there really helping the Republicans to win back the House and win back the Senate. It’s an effort that everybody needs to contribute to,” said David McIntosh, president of the influential Club for Growth, who has joined Pence at several events.

McIntosh, who has been at odds with Trump in recent months, said he believes the electorate is “moving on” from 2020 “to what’s on the ballot this election.” He said candidates such as Masters “want to show that they’ve got support from all different types of Republicans, everyone that’s out there, so there’s a unity theme.”

“It’s always been my view,” he added, “that leaders like that help themselves by helping.”

Pence’s policy group recently held a retreat in Utah at the Montage Deer Valley that was attended by GOP donors such as Matthew J. Bruderman, a New York investor who praised Pence’s election-year efforts.

“He’s been extremely effective and deserves credit for continuing to help elect people who he believes will help advance conservative principles,” Bruderman said by email, adding that he would “support him or any fiscal conservative of courage and character that wins the nomination” in 2024.

Art Pope, another donor who attended the retreat, said he “personally would love to see Vice President Pence run in 2024.”

“Yes there are frictions and there are divisions” in the GOP, he said, but the party is uniting behind its nominees now that primaries are over.

“Vice President Pence is both benefiting for that unity and helping lead that unification,” he said.