Hundreds of miles from Iowa, caucusgoers participate in 1st in the nation contest

Despite being more than 850 miles away from Iowa, these enthusiastic caucusgoers were participating in the first presidential nominating contest of the year.

The gathering was one of 87 “satellite caucus” locations around the world aimed at expanding access to more Iowa residents. Last presidential election, the Iowa Democratic Party experimented with satellite caucuses, but only offered four locations.

The caucusgoers in D.C. included students who still officially reside in Iowa, professionals sent to the area for work conferences and people who recently relocated to the nation’s capital.

To qualify for the caucuses, attendees must be Iowa residents, registered members of the Democratic Party and will be at least 18 years old by Election Day in November.

Eleven candidates are currently competing for the Democratic Party’s presidential nomination. As in Iowa, a central focus for many voters at the D.C. caucus was choosing the person best positioned to beat President Donald Trump in 2020.

In the end, Warren’s supporters accumulated 42 people, followed by former South Bend, Indiana Mayor Pete Buttigieg with 23 people, former Vice President Joe Biden with 20 people and Sen. Bernie Sanders with 15 people. Under the rules, a candidate must have 15 percent of attendees to be viable, or eligible to receive delegates.

The D.C. caucus results offered a stark contrast to RealClearPolitics’ Iowa polling average showing Sanders at about 23 percent, Biden polling in second at 19.3 percent, Buttigieg in third with 16.8 percent and Warren in fourth place with 15.5 percent. Final results for the caucuses were still coming in early Tuesday morning after unexpected delays Monday.

In interviews with PBS NewsHour, a number of the Iowa caucusgoers in D.C. attributed their support for Warren to her detailed plans on issues like education and climate change. Michelle Johnson, 26, from Des Moines said that she caucused for Sanders in 2016 because she liked his progressive ideas. This time around she decided to go for Warren.

An AP entrance poll found more than half of people who supported Sanders in 2016 planned to caucus for another candidate this year.

“Elizabeth Warren just has all of her plans so well laid out. She makes it easy to understand. You can tell she’s passionate,” Johnson said. “The first thing that drew me to her is her child care plan.”

“We think she’s straight up. She has integrity. I think she’s honest,” said Jim Swain, 66, who drove five hours to caucus in D.C. with his wife from North Carolina where they spend their winters, though they are officially residents of Cedar Rapids, Iowa. Swain added that Warren’s message on growing inequality resonates with them. “We’re middle America; we are not one-percenters.”

In presidential elections, candidates travel around Iowa for months ahead of the caucuses, pouring millions of dollars into advertising and staffing. The caucuses gained prominence after they became the first-in-the-nation contest by chance in 1972.

Historically, candidates who do well in Iowa receive more attention from the voters and the media, boosting donor and voter confidence in their electability. Some candidates faced unforeseen challenges this time around, because 2020 candidates who are also U.S. senators — Amy Klobuchar, Michael Bennet, Sanders and Warren had to all be in D.C. for the Senate impeachment trial. 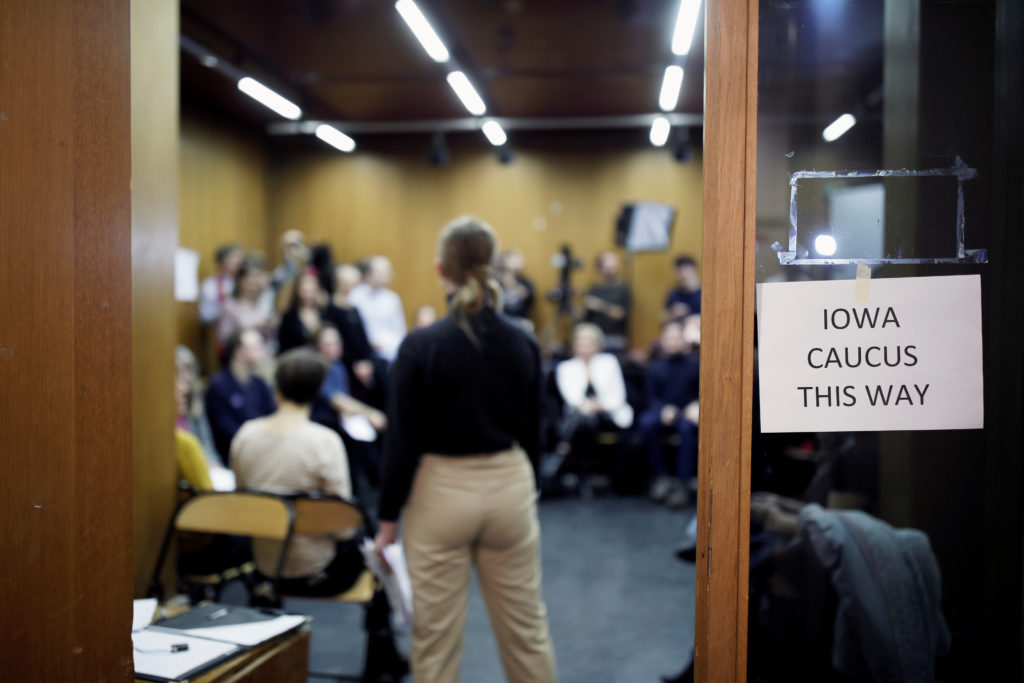 But the Iowa caucuses have long faced criticism for their outsized influence on the presidential nomination process.

The state’s population is about 85 percent white, compared to the national average of 60 percent white residents. Critics often argue that a more diverse state would be better to take over the coveted first-place spot.

Caucusing is also a complicated, inconvenient process. In a primary, voters have a wider window of opportunity over the course of the day to travel to their polling place. But caucusing takes place at one designated time on a weeknight and can take hours.

These restrictions can limit participation from shift workers, caregivers, parents and others. The Iowa Democratic Party is seeking to mitigate some of these concerns by hosting satellite events in places like nursing homes, work-sites and out-of-state college campuses. The locations this election year are in Florida, Washington, D.C., and even Paris, France and Glasgow, Scotland.

“By virtue of the caucus process, there are folks who may not be able to get to their precinct caucus for one reason or another. So we looked at ways to get more people access to our process,” said Troy Price, chair of the Iowa Democratic Party. “We have sites targeting people with disabilities. We have Spanish-lanuage satellite caucus sites. We have sites targeting refugee populations.”

Each event, like the one in D.C., followed the same process as the in-state precincts. The D.C. participants first formed into groups based on their top Democratic candidate. The candidates who did not accumulate at least 15 percent of caucusgoers (in this case 15 people) are considered “not viable.” The attendees from non-viable groups then had one opportunity for 15 minutes to either join an already viable group or convince others to join their group.

Bernie Sanders supporters, for example, had just 14 people after the first alignment — making him unviable. They convinced one person to join them, however, for the second alignment, allowing his group to meet the 15 percent threshold.

In the end Warren, came out on top in D.C., but the question of how the Massachusetts senator fared in the rest of Iowa remains.

The party had hoped to avoid repeating reporting woes from the 2016 caucuses between Sanders and Hillary Clinton, by simplifying the alignment process in 2020, and having caucusgoers write down and submit their chosen candidate on preference cards. The Iowa Democratic Party also rolled out a phone app meant to speed up the reporting process. But confusion and delays emerged as party officials reported “inconsistencies in the reporting” and difficulties with the new technology.

Still, participants in the satellite caucuses appeared excited and energized by the opportunity to be a part of the first round of the 2020 election season.

“I think that it was really wonderful that they enabled people to do remote caucuses,” Megan Srinivas, 32, said. “I remember when I was in college I had to fly back, but not everybody can afford to do that. … I’m glad [the party] was able to be more inclusive this time. It’s a huge step forward.”