In Michigan, Trump supporters say they’re ready to move on from Mueller

GRAND RAPIDS, Michigan — President Donald Trump unleashed an extended attack on the special counsel investigation Thursday, using his first campaign rally since Robert Mueller submitted his report to take a victory lap in a battleground Midwestern state that he narrowly won in 2016 and will need to carry again to win re-election next year.

Trump called the investigation into Russian election interference and possible ties to his campaign the “single greatest political hoax” in American history, an attempt by Democrats and the media to delegitimize his election victory by placing a “phony, corrupt, disgusting cloud” over his presidency. The president simultaneously praised Attorney General William Barr’s summary of the special counsel report, saying correctly that Mueller found no evidence of collusion but claiming falsely that it fully exonerated him on the question of whether he obstructed justice.

According to Barr’s summary, Mueller wrote on the issue of obstruction of justice that “while this report does not conclude that the President committed a crime, it also does not exonerate him.”

READ MORE: 4 things we learned from Barr’s summary of the Mueller report

In presenting his own version of the findings in the report, which has not yet been made public, Trump did not mention Mueller’s conclusion that Russia interfered in the 2016 election, a view shared by the U.S. intelligence community and both parties in Congress. He also did not call for the full report to be released, something he supported as recently as last week.

Supporters at the rally in Grand Rapids, Michigan, said they shared Trump’s view that Democrats and the media were responsible for pushing the special counsel investigation, which first began in May 2017, and many said they did not need to see the full report to make up their minds that the president had done nothing wrong.

“We have more support for him now than ever before. We love that man.” – Norma Housey, a retired UPS worker.

“The whole thing was made up in the first place,” said Norma Housey, a retired UPS worker. She added that she thought the investigation had galvanized support for the president in Michigan, one of a handful of traditionally blue states, along with Pennsylvania and Wisconsin, that handed Trump the 2016 presidential election. “We have more support for him now than ever before. We love that man,” Housey said.

Democrats will be wasting their time if they continue investigating Trump, said Matthew Mackay, a junior at Grand Valley State University. Mackay said he hoped Mueller’s full report would be released, because it would prove Trump’s innocence and help the president turn the page and enter his 2020 re-election campaign with new momentum.

“I think this could be a major turning point” for Trump, he said. 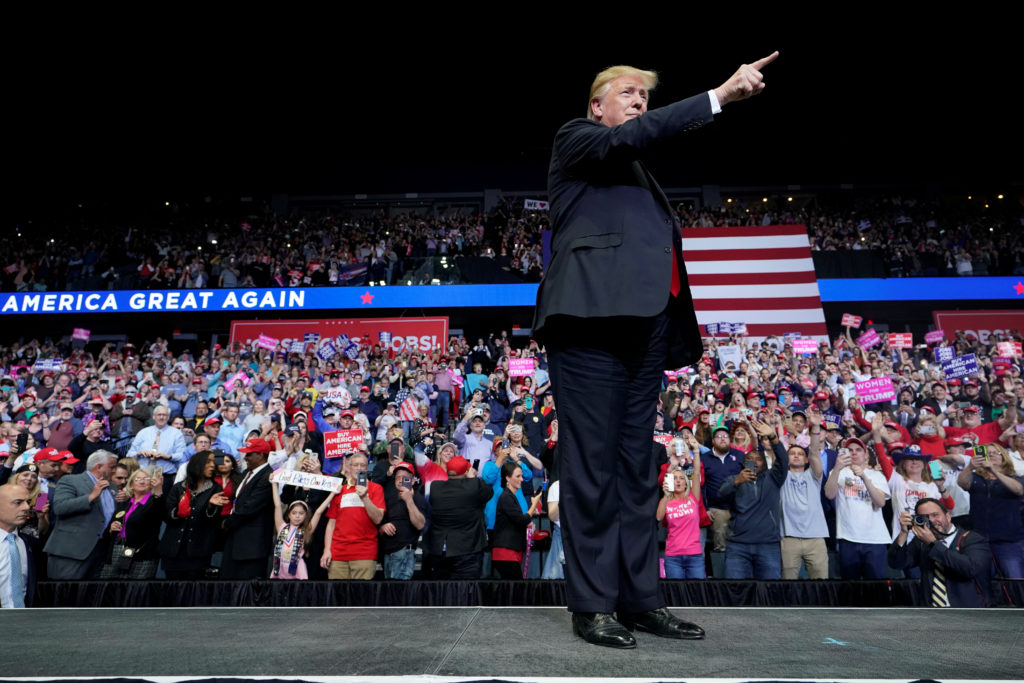 Whether this will be a true inflection point in Trump’s presidency remains to be seen. The report largely ended talk of impeachment in Washington. House Democrats are still moving forward with investigations into Trump and his businesses, however, and several state and federal investigations into the president remain ongoing.

Barr’s decision to review the Mueller report and quickly issue a brief four-page summary on Sunday, just two days after he received it, has drawn criticism from Democrats and increased pressure on the attorney general to release the full findings. That pressure increased Thursday after the New York Times reported that Mueller’s report was 300 pages long.

A recent Politico/Morning Consult poll found that 47 percent of the public still believe Trump obstructed justice in the Russia investigation. And most Americans want to see the report; a Quinnipiac poll released Monday found 84 percent of respondents want the full report to be released.

The fallout from the report will also depend on how Trump continues responding to news about it, as well to the other legal challenges swirling around his presidency.

At the rally Thursday, the president opened the roughly 80-minute speech with an extended riff on the report, reveling in the opportunity to tout Barr’s conclusions and attack his enemies.

MORE: How Americans feel about Mueller, the media and health care

Trump said Democrats, the media and the “deep state” tried to rewrite his 2016 election win “and sabotage the will of the American people.” He called his political opponents a “group of losers” and wondered aloud if Democrats would “continue defrauding the public with ridiculous bullshit” instead of focusing on governing.

He also took shots at the 2020 Democratic presidential field, while touting his actions on immigration and the economy.

“I know he’s got a hell of a tone. But he does what he says he’s going to do.” – Roger Klein, a retired truck driver

Roger Klein, a retired truck driver who attended the speech, said after more than two years in office, he remained displeased with Trump’s rhetoric. But Klein, who voted for Trump in 2016 and plans to vote for him again next year, said he was willing to overlook Trump’s personal style because he believed the president was making good on his promises to grow the economy.

“I know he’s got a hell of a tone. But he does what he says he’s going to do,” Klein said. He added that he was inclined to agree with Barr’s summary of Mueller’s report and conclusion that Trump did not obstruct justice, though he did want to read the full report for himself.

But others at the rally Thursday said they were focused on other issues. Jamie Gilbertsen, a small business owner, said she cared more about Trump’s economic policies. Since Trump took office, she said she and her husband, who own a restaurant in Hudsonville, Michigan, have been able to hire three new workers and give all of their employees raises. Trump has “tremendous support in Michigan,” she said.

As for the report, Gilbertsen said she didn’t think releasing the full version would change her mind about Trump. “I’m good. I don’t feel like I need to see it.”

Left: President Donald Trump is cheered by supporters as he arrives to speak during a Make America Great Again rally in Grand Rapids, Michigan, on March 28, 2019. REUTERS/Joshua Roberts