Mueller’s report should be made public, most Americans say

Three-quarters of Americans say the public should see the full report from special counsel Robert Mueller’s completed investigation into Russian meddling during the 2016 presidential election, according to the latest poll from the PBS NewsHour, NPR and Marist.

One week ago, the special counsel’s team wrapped its nearly two-year probe into the relationship between President Donald Trump’s 2016 election campaign and Russia, and delivered its report to the Department of Justice.

Two days later, Trump-appointed U.S. Attorney General William Barr submitted a four-page letter to Congress and the American public that summarized his interpretation of the Mueller report, which was widely reported on Thursday to be more than 300 pages long.

Most Americans — 75 percent of poll respondents — say they still need to see the entire report to better understand what happened. That sentiment emerged across the political spectrum, with 54 percent of Republicans wanting to see the report, along with 90 percent of Democrats and 74 percent of people who identify as politically independent. 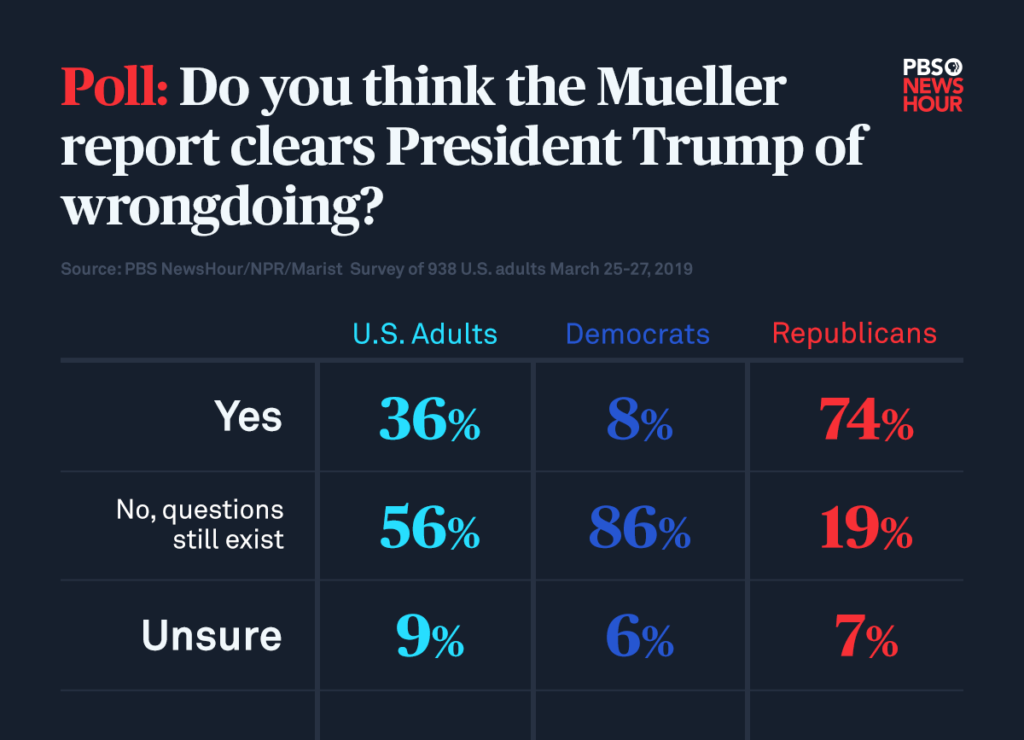 In his letter, Barr said Mueller found that no one associated with the Trump campaign “conspired or coordinated” with the Russian effort. Barr also concluded that there was insufficient evidence to prove that Trump had obstructed justice. Congress has asked the Justice Department to submit the full findings, but Democratic Rep. Jerrold Nadler, House Judiciary chairman, said Barr doesn’t plan immediately to give lawmakers the confidential report, which is being redacted.

READ MORE:Could Congress force the Mueller report to be made public?

“People clearly want to see more about the report,” said Lee Miringoff, who directs the Marist Institute for Public Opinion.

Democratic strategist Doug Thornell said that the desire for more transparency around the Mueller report, including its full release, “makes it clear it’s a non-partisan issue.”

“There’s unity across the country that this report should be made public,” Thornell said.

Barr’s summary was sufficient for 18 percent of Americans, who said it satisfied what they needed to know about the Mueller probe’s findings. That included 40 percent of Republicans, 5 percent of Democrats and 19 percent of independents.

The proportion of Americans who said they wanted the investigation’s full report to be publicly released has not changed much since December, when that number was 76 percent of U.S. adults, according to a polling data from the PBS NewsHour, NPR and Marist. Then as now, a majority of Americans, regardless of political party, supported full transparency around the report.

The public was split on whether or not they thought Barr had performed well so far. A third of Americans said they approved of his conduct, while just as many said they didn’t know. Nearly a third said they disapproved of the attorney general’s performance.

Two-thirds of Americans think Trump should not pardon members of his administration or his presidential campaign who were criminally convicted as a result of the Mueller investigation.

Two-thirds of Americans think Trump should not pardon members of his administration or his presidential campaign who were criminally convicted as a result of the Mueller investigation. And that opinion was true among 53 percent of Republicans, 63 percent of independents and 87 percent of Democrats.

Many Republicans are ready to move on, said Terry Holt, a national spokesman for former President George W. Bush’s 2004 re-election campaign. Republicans, relieved and satisfied with the report as it has been disclosed, have “been through it, and they’ve seen the coverage, and they’re tired of it,” he said.

But, Holt said, some GOP influencers “are nervous about what devil is in the details.” One concern that remains is whether further evidence of obstruction of justice by the president could surface, he said.

No matter what, it is obvious the public will see more of the Mueller report, Holt said: “The story isn’t over.”

With the latest numbers, Trump’s approval rating remains fairly static, as it has since his inauguration, according to Marist polling data. Days after the Mueller report was officially completed, 42 percent of Americans said they thought Trump was doing a good job as president, while half of U.S. adults said they disapproved of his performance.

The Mueller probe never rose to the level of a make-or-break issue for most voters in the same way that better wages, affordable health care or high-quality public education have, said Thornell. “People are still concerned about their daily lives and the lives of their family members,” he said.

While Trump has claimed the conclusion of the Mueller probe as a political victory, Holt said it is too soon to anticipate what long-term political influence it may offer, especially without full findings available to the public. How Trump leverages his “personal style and unique agenda” across party lines, particularly with conservative Democrats, he said, will play a bigger role in determining the success of his 2020 re-election bid.

A winning candidate in the next presidential election will be one who can break through those divisions in an increasingly polarized nation, Holt said.

“President Trump has the money and institutions on his side, but he lacks appeal among Latinos, women and increasingly among conservative Democrats,” he said. “He’s going to have to fix that.”

When it comes to the next election, do Americans feel the nation’s democratic institutions and process is safer since 2016? Looking ahead to 2020, 56 percent of Americans said they think Russians likely will interfere again. Fewer than one out of five U.S. adults — 17 percent — think Russia will sit idly by and do nothing.