David Holmes, the political affairs counselor at the U.S. embassy in Kiev, Ukraine, testified Thursday that, in March, U.S. policies at the embassy in Ukraine shifted toward a political agenda.

“Specifically, the three priorities of security, economy, and justice, and our support for Ukrainian democratic resistance to Russian aggression, became overshadowed by a political agenda being promoted by former New York City Mayor Rudy Giuliani and a cadre of officials operating with a direct channel to the White House,” Holmes told House lawmakers during his opening statements in an impeachment hearing.

Holmes also reiterated his prior testimony that while he was at a restaurant on July 26, he heard Gordon Sondland, the U.S. ambassador to the European Union, speaking to President Donald Trump over the phone about “investigations.” The call came a day after Trump spoke to Ukraine’s president and asked him to investigate former vice president and 2020 presidential candidate, Joe Biden and his son, Hunter.

Sondland, who testified Wednesday, confirmed he discussed investigations with Trump but said he did not mention the Bidens on that call.

Democrats are trying to determine whether there is a direct link between the U.S. aid that was withheld from Ukraine and Trump’s efforts to get Ukraine to investigate his political rivals. 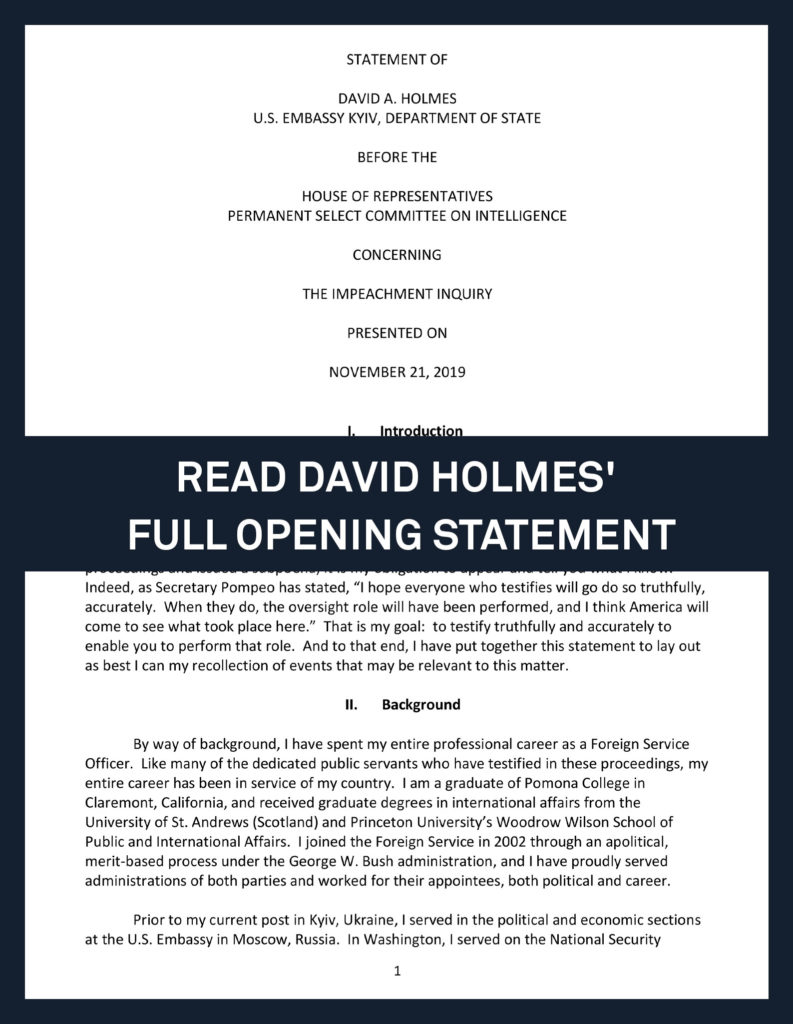 Left: David Holmes, the counselor for Political Affairs at the U.S. embassy in Ukraine, arrives to appear for a closed-door deposition as part of the impeachment inquiry into U.S. President Donald Trump on Capitol Hill in Washington, U.S., November 15, 2019. Photo by Yara Nardi/Reuters