In their case against Donald Trump, House Democrats presenting the case during the impeachment trial will argue that the former president’s role in inciting the riot and attack on the U.S. Capitol last month “is unmistakable.”

“The nation will indeed remember January 6, 2021 — and President Trump’s singular responsibility for that tragedy,” they wrote in their trial brief released Tuesday. “It is impossible to imagine the events of January 6 occurring without President Trump creating a powder keg, striking a match, and then seeking personal advantage from the ensuing havoc.”

The House voted exactly one week after the attack on the Capitol to impeach then-President Trump for a second time — the first time that has happened in American history. Ten Republicans joined with all Democrats to impeach Trump for incitement of insurrection as members of Congress and then-Vice President Mike Pence gathered on Jan. 6 to confirm the Electoral College vote and Joe Biden’s 2020 election win.

The House Democratic managers — Reps. Jamie Raskin of Maryland, Diana DeGette of Colorado, David Cicilline of Rhode Island, Joaquin Castro of Texas, Eric Swalwell of California, Ted Lieu of California, Madeleine Dean of Pennsylvania, Joe Neguse of Colorado and Del. Stacey Plaskett of the U.S. Virgin Islands — will also argue that the Senate has jurisdiction to try a president after he has left office.

“President Trump is personally responsible for inciting an armed attack on our seat
of government that imperiled the lives of the vice president, members of Congress and our families, and those who staff and serve the legislative branch,” they wrote in the brief. “The nation cannot simply ‘move on’ from presidential incitement of insurrection.”

They also detail Trump’s efforts to overturn the Electoral College vote, including falsely claiming he won the election, filing lawsuits to challenge the results and communicating with election officials unsuccessfully to re-examine the count.

“The only honorable path at that point was for President Trump to accept the results and concede his electoral defeat,” they wrote. “Instead, he summoned a mob to Washington, exhorted them into a frenzy, and aimed them like a loaded cannon down Pennsylvania Avenue.”

The trial begins in the Senate on Feb. 9. Read the full impeachment trial brief. 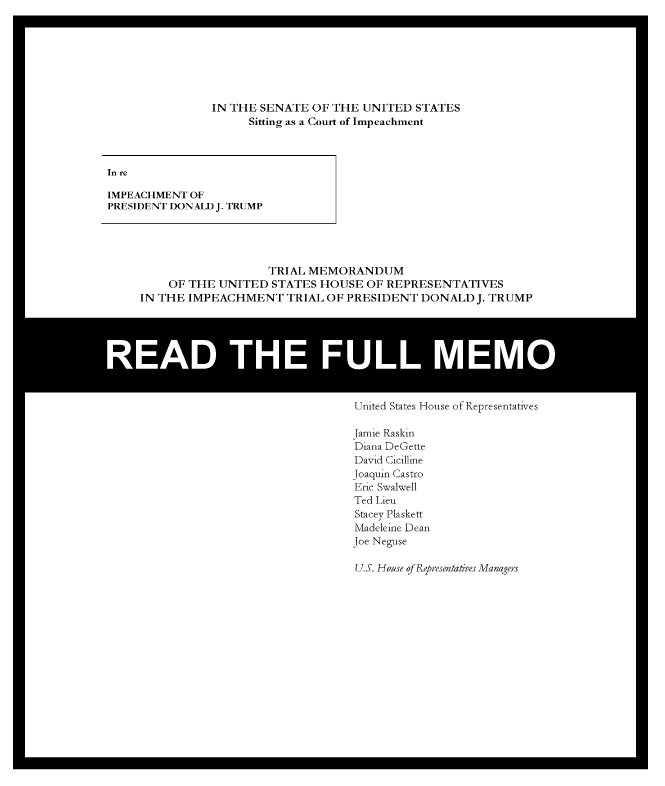