Why Republicans have the advantage this fall 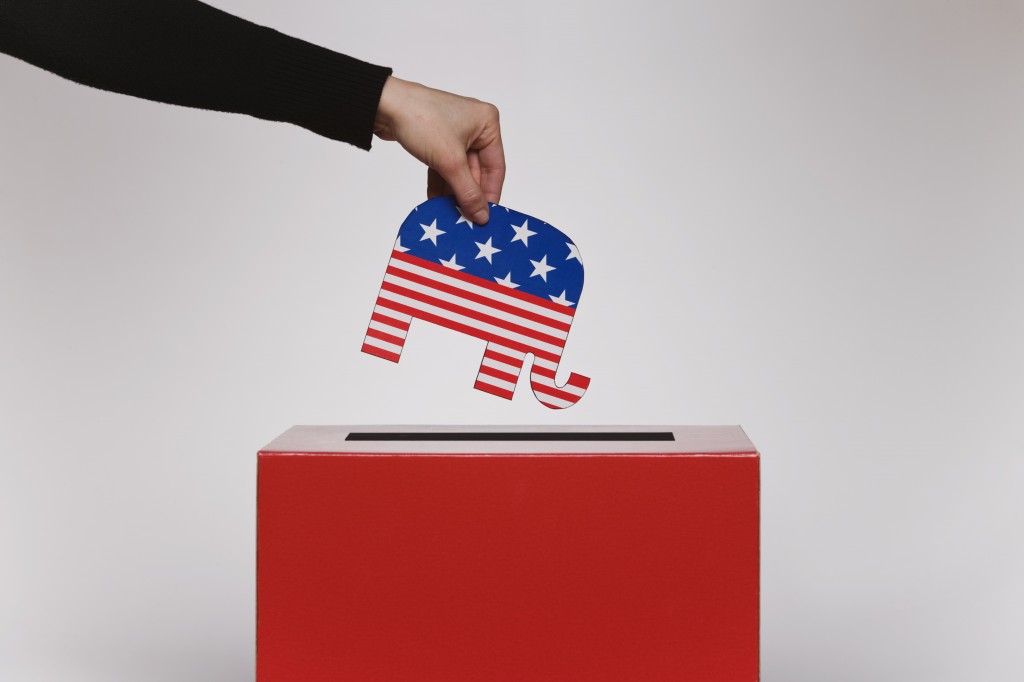 The scales tip toward Republicans: Welcome to the campaign. Post-Labor Day, the table is set for what is on pace to be the most expensive midterm in history. It could lead to a Republican majority in both the House and Senate for the last two years of President Barack Obama’s time in office. So why do Republicans have the advantage starting out? First, with primary season all but wrapped up — Delaware, Massachusetts, New Hampshire and Rhode Island hold the last primaries next Tuesday — Republicans have done all they can structurally to prevent problematic candidates from emerging, unlike in years past. But most importantly, it’s where these races are taking place — largely in conservative-leaning states. In fact, of the 12 states with competitive Senate races that are likely to decide the outcome of control of the Senate, Republican Mitt Romney won nine of them in the 2012 presidential election by an average of 16 points. And that’s in a year when Republicans lost the Electoral College by 126 votes. (Republicans need to net six states seats to wrest control.) What’s more, if you add in the three states won by President Obama, Republicans still have an 11-point advantage. Democrats are defending more states — 10 of the 12 are seats held by Democrats. And the two Democratic targets are in states Romney won by an average of 15 points. Plus, the demographics of who shows up in midterm elections favor Republicans. The electorate in midterms is generally whiter, older, more likely to be married and have better paying jobs. 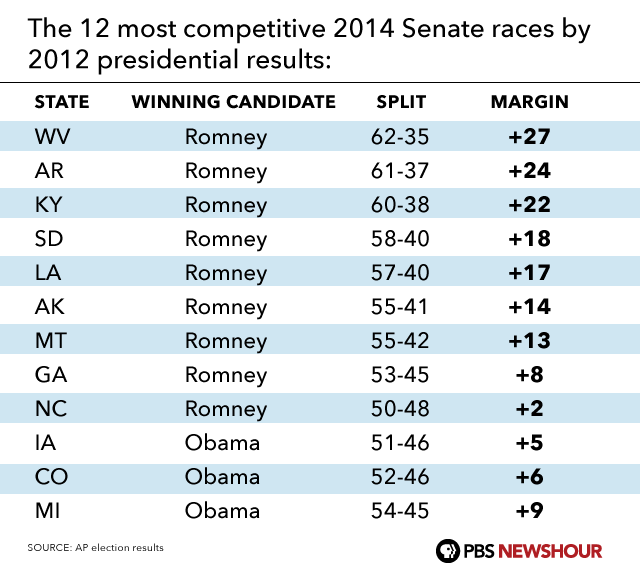 Why Democrats can still win: Republicans are only favored, though, to win between four and eight seats. And Democrats still have a chance of retaining the Senate. But how can that be with the fundamentals described above and a president with among his lowest approval ratings, and even lower in these 12 states on average? Because candidates matter. Incumbents traditionally have an advantage because voters in those states have already elected them statewide, giving them natural bases — and fundraising networks and turnout operations — to get 50 percent. What’s more, the candidates Democrats have in some of these red states are legacy candidates. In other words, not only are they personally well known, their families are too. The Landrieus, Pryors, Begiches, and Udalls are near political royalty in their respective states. But will their personal dynasties pay the dividends needed this fall and be enough to overcome the national environment? It could be for some but not for others. How many survive could be the difference between a Democratic and Republican Senate for the last two years of Obama’s presidency.

The $4 billion campaign: Steve Austin’s mouth would hit the floor. For those of you more familiar with him as a wrestler than a 1970s TV character, he was the $6 Million Man. Even in 2014 terms — his limbs would be worth $29 million in today’s dollars — that would pale in comparison to the money flooding politics. Get this: the AP reports that $1 billion has already been spent on campaign ads, and “Before it’s all over, the bill for the first midterm election since both Democrats and Republicans embraced a historic change in campaign finance is likely to grow to $4 billion or more.” Almost a quarter of that money could likely be untraceable. So-called “dark money,” dollars spent by groups that don’t have to disclose its donors, has already hit $50 million, but is projected to get close to $1 billion and surpass the record set in the 2012 presidential election, according to the Center for Responsive Politics.

Impact of wealthy donors: The Washington Post’s Matea Gold reports that wealthy donors have embraced their newfound freedom to give more than the previous limit of $123,200 to federal candidates and party committees wiped away earlier this year by the Supreme Court’s ruling in McCutcheon v. Federal Election Commission. “Together, 310 donors gave a combined $11.6 million more by this summer than would have been allowed before the ruling. Their contributions favored Republican candidates and committees over Democratic ones by 2 to 1,” Gold writes. This one quote from a big GOP donor popped out from Gold’s story: “You have to realize, when you start contributing to all these guys, they give you access to meet them and talk about your issues,” Andrew Sabin, the owner of a precious metals refining business, told the Post.

Obama heads overseas: The only time President Obama will be seen in public Tuesday is his departure from Washington on his way to Estonia to reassure Baltic allies that the U.S. will stand with them even as Putin flexes his muscle in Ukraine. “Part of the reason I’ll be going to Estonia is to let the Estonians know that we mean what we say with respect to our treaty obligations,” Obama said last week. The AP’s Julie Pace filed this curtain-raiser on the president’s trip, which will include a meeting with the leaders of Estonia, Latvia and Lithuania on Wednesday before departing for this week’s NATO summit in Wales. The sessions Thursday will include Afghanistan and Ukraine. The president will also hold a press conference on Friday before returning to the U.S.

Immigration delay? President Obama promised to unveil immigration executive action by the end of the summer if Congress didn’t act. Labor Day came and went with no executive action. Yes, summer technically doesn’t end until Sept. 22nd, but President Obama on Thursday hinted that he might delay action even further. Remember, we noted Thursday that because of the terrain this midterm is being played on, any action by the president on immigration could serve to only fire up the conservative base and further imperil Democrats’ chances of holding the Senate. With an internal White House conflict on what to do about immigration given Democrats’ chances this fall, don’t be surprised if the decision is, in fact, punted until after the midterms. The president already seemed to be hanging it on the lower number of unaccompanied minors coming across the border in the last few months. “We’re seeing a significant downward trend in terms of these unaccompanied children,” President Obama said in his news conference Thursday. “And what that, I think, allows us to do is to make sure that those kids are being taken care of properly with due process.” The tie to the unaccompanied children seemed to come out of left field, especially considering this border crisis was never the real reason for weighing action.

Daily Presidential Trivia: On this day in 1944, future president George H.W. Bush, while serving as a Navy pilot during World War II, took out a Japanese radio tower before his plane was hit and he was forced to eject. What rank did Bush achieve in the U.S. Navy? Be the first to Tweet us the correct answer using #PoliticsTrivia and you’ll get a Morning Line shout-out. Congratulations to Carole Ann Kronberg (@Marsh_Owl) for guessing Thursday’s trivia: What reason did John Hinckley give for shooting President Reagan? The answer was: to impress actress Jodie Foster.

On this day 70 years ago, @GeorgeHWBush was shot down over Chi Chi Jima and later rescued by a US sub. He made 58 combat flights during WW2.

I wonder if Eric Cantor carefully weighed the Twitter abuse he would absorb before cashing out for millions. Must have been a tough choice.