WASHINGTON (AP) — House Democrats subpoenaed President Donald Trump’s lawyer, Rudy Giuliani, for documents on Monday as they ramped up investigations of the president’s dealings with Ukraine.

The House Intelligence, Foreign Affairs and Oversight and Reform panels announced the subpoena as they examine Trump’s efforts to have Ukraine investigate political rival Joe Biden and his family. Giuliani assisted in that effort.

READ MORE: Who’s who in the Trump impeachment inquiry?

The committees are investigating the matter, the subject of a now-public whistleblower’s complaint, as part of an impeachment inquiry endorsed by House Speaker Nancy Pelosi last week. They are moving rapidly with a goal of finishing the inquiry, and perhaps even voting on articles of impeachment, by year’s end.

Both Trump and Giuliani have acknowledged the efforts to influence Ukrainian President Volodymyr Zelenskiy to investigate Hunter Biden’s membership on the board of a Ukrainian gas company at the same time his father was leading the Obama administration’s diplomatic dealings with Kyiv. There has been no evidence of wrongdoing by either of the Bidens.

Both Trump and Giuliani have acknowledged the efforts to influence Ukrainian President Volodymyr Zelenskiy to investigate Joe Biden’s son Hunter.

The chairmen of the three committees noted that Giuliani has acknowledged his efforts to pressure Ukrainian officials on national television.

“In addition to this stark admission, you stated more recently that you are in possession of evidence — in the form of text messages, phone records and other communications — indicating that you were not acting alone and that other Trump administration officials may have been involved in this scheme,” wrote House intelligence committee Chairman Adam Schiff, Foreign Affairs Chairman Eliot Engel and Oversight and Government Reform Chairman Elijah Cummings.

A secret complaint from the whistleblower, whose name is not publicly known, detailed a July phone call between Trump and Zelenskiy in which Trump urged the probe. It also revealed White House efforts to keep the conversation private.

The subpoena comes as Republican Leader Mitch McConnell said Monday that Senate rules would require him to take up any articles of impeachment against Trump if approved by the House, swatting down talk that that the GOP-controlled chamber could dodge the matter entirely.

“I would have no choice but to take it up,” McConnell said on CNBC. But he cautioned, “How long you’re on it is a whole different matter.”

If the House approves articles of impeachment — not introduced at this point — they would be sent to the Senate for trial. McConnell suggested he does not have the 67 votes to change the rules. But the Kentucky Republican, the Senate’s chief strategist, left open what he means by taking up the issue.

Those tricky procedural questions could affect Trump’s political future and next year’s presidential and congressional election. Democrats have launched a coordinated political, messaging and polling strategy aimed at keeping any backlash in closely divided districts from toppling their House majority. 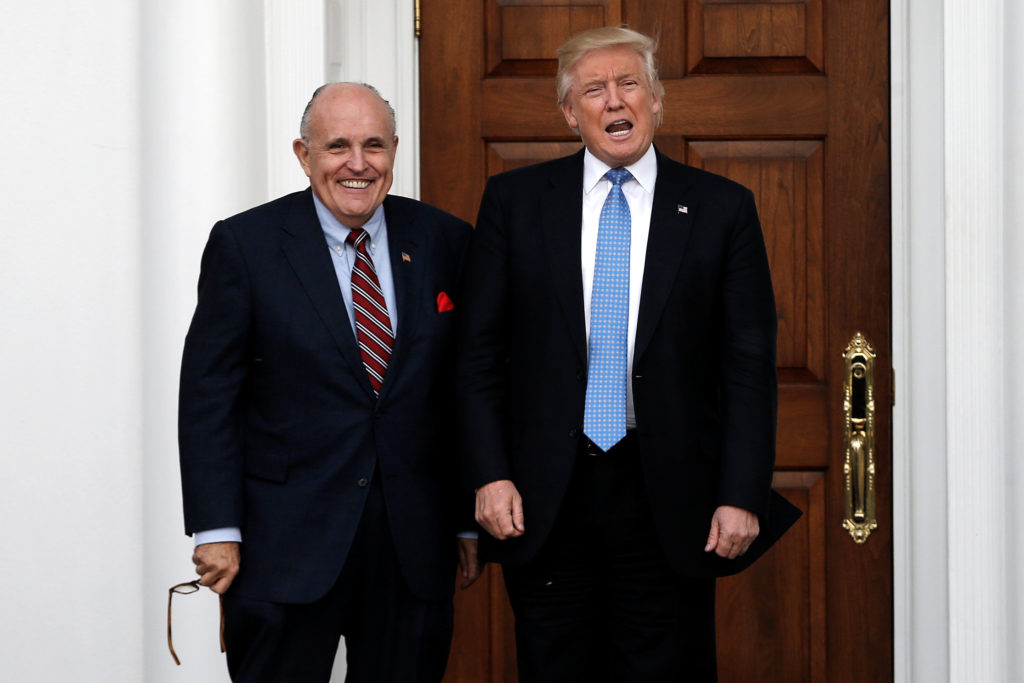 Both Trump and Giuliani have acknowledged the efforts to influence Ukrainian President Volodymyr Zelenskiy to investigate Hunter Biden’s membership on the board of a Ukrainian gas company at the same time his father was leading the Obama administration’s diplomatic dealings with Kyiv. There has been no evidence of wrongdoing by either of the Bidens. File photo by REUTERS/Mike Segar

House intelligence committee chairman Adam Schiff said on Sunday that the panel would hear from the still-secret whistleblower “very soon,” but that no date had been set and other details remained to be worked out.

Polling showed some movement in public sentiment. A one-day NPR/PBS NewsHour/Marist poll conducted Sept. 25 found that about half of Americans — 49% — approve of the House formally starting an impeachment inquiry into Trump.

There remains a stark partisan divide on the issue, with 88% of Democrats approving and 93% of Republicans disapproving of the inquiry. But the findings suggest movement: Earlier polls conducted throughout Trump’s presidency have consistently found a majority saying he should not be impeached.

Republicans were split over how and whether to defend Trump’s own words contained in a phone transcript and his actions, described by a whistleblower’s report — both of which were made public by the White House.

The result has been a rainbow of approaches, led by Trump, who stormed on Twitter that the whistleblower was “fake” and suggested the people leading the probe should be arrested and charged with treason.

“The Fake Whistleblower complaint is not holding up,” he tweeted Monday morning.

Trump has insisted his call was “perfect.”

“He didn’t even know that it was wrong,” said House Speaker Nancy Pelosi, describing her own phone call from Trump in which the president suggested the documents would exonerate him.