A majority of Americans disapprove of President Donald Trump’s national emergency declaration to build a wall along the U.S.-Mexico border, according to the latest poll from the PBS NewsHour, NPR and Marist.

Sixty-one percent of U.S. adults said they do not approve of the president’s national emergency, while 36 percent say they support it. Another 3 percent of respondents said, in the days following Trump’s Friday announcement in the Rose Garden, that they were unsure of how they felt. 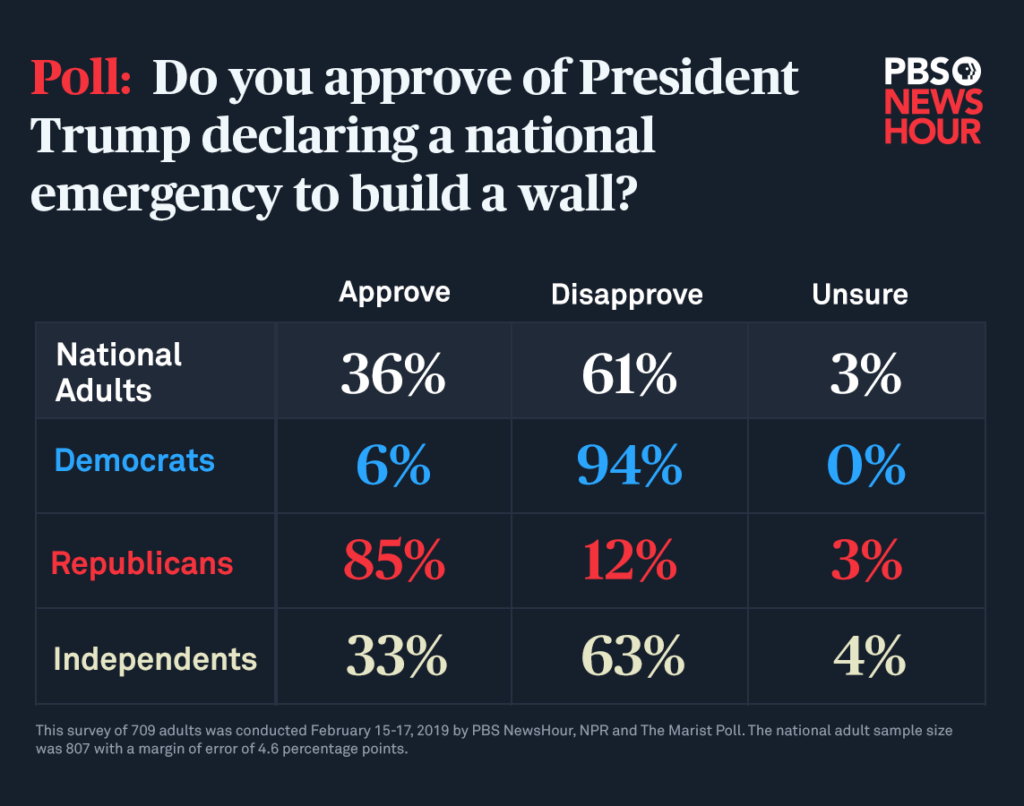 Trump has often cited a crisis along the U.S.-Mexico border, where there has been a spike in the number of people caught crossing the border illegally in recent months, many of them from Central America and seeking asylum. However, overall, immigration experts have pointed out, the number of border apprehensions year to year has dropped from their peak in 2000.

Thirty-nine percent of U.S. adults said they thought there was an emergency at the border, and the same number said Trump was within his presidential authority to make that declaration.

Civil liberty advocates and state attorneys general said in the days since Trump’s announcement that they plan to challenge Trump’s national emergency declaration.

Shortly after the president’s speech, the American Civil Liberties Union issued a statement saying they planned to file a lawsuit this week challenging the president’s national emergency declaration.

Late Monday night, a coalition of 16 states, led by California Attorney General Xavier Becerra, formally filed a lawsuit against the emergency declaration, calling it unconstitutional — specifically, that it ignores separation of powers.

On Friday, days before his coalition formally filed legal action, Becerra told NewsHour correspondent Amna Nawaz that Trump’s actions are “not only reckless, but unlawful.”

Becerra said it’s important to ensure that when Americans pay tax dollars to the federal government “that they know they are going to be used for the right purposes and the purpose Congress said, not because some president says all of a sudden he’s unhappy and he wants to declare a national emergency.”

Trump anticipated that his declaration could face legal action, laying out in his remarks Friday a series of potential events that included a lawsuit destined for the Supreme Court (where he hoped “we’ll get a fair shake, and we’ll win”). When a reporter at Friday’s event raised the question of whether the move violates the Constitution, Trump said, “I expect the courts to determine that.”

Twenty-one percent of Republicans say Trump’s national emergency should be legally challenged in court. In total, 60 percent of Americans said they felt that way, including 88 percent of Democrats and 60 percent of independents.

In this poll, it is not clear whether respondents want the president’s declaration to have its day in court because they oppose it, or in order to cement it as precedent for greater executive authority. But critics of Trump’s declaration — both Republicans and Democrats — have raised concerns about what kind of precedent this could set for presidential powers.

Sen. Chuck Grassley, R-Iowa, said he “wished he wouldn’t have done it,” USA Today reported. And Sen. Marco Rubio, R-Fla., said in a statement that “we have a crisis at our southern border, but no crisis justifies violating the Constitution.”

Overall, the responses by people who applauded the move mirror the president’s approval ratings since he took office. According to historic polling data from Marist, Trump’s approval ratings have hovered in the mid-30s to low-40s consistently since February 2017. In January of 2019, 39 percent of U.S. adults surveyed by the PBS NewsHour, NPR and Marist said they approve of the job Trump is doing.

When broken down by political party, 94 percent of Democrats disapproved of the decision, along with 63 percent of people who identify as politically independent and 12 percent of Republicans.

Trump’s declaration — made after Congress allocated a much smaller amount to border barriers than he had wanted — also highlighted divisions between him and his own party.

At the White House on Friday, Trump told reporters that he “didn’t need to do this,” seemingly undermining his own argument. He also asserted that it was not for political gain, suggesting he had “already done a lot of wall for the election — for 2020.” (In fact, the Trump administration has not built any additional border barriers so far.)

So what drove him in making this declaration? On this issue, it’s all about the base, said Barbara Carvalho, director for the Marist Poll.

Left: U.S. President Donald Trump heads back to the Oval Office after declaring a national emergency at the U.S.-Mexico border during remarks about border security in the Rose Garden of the White House in Washington, U.S., February 15, 2019. REUTERS/Carlos Barria