JEDDAH, Saudi Arabia (AP) — President Joe Biden said he raised the murder of Jamal Khashoggi at the beginning of his meeting with Saudi Crown Prince Mohammed bin Salman on Friday.

Watch Biden’s remarks in the player above.

“I said, very straightforwardly, for an American president to be silent on an issue of human rights is inconsistent with who we are and who I am,” Biden said. “I’ll always stand up for our values.”

U.S. intelligence believes that the crown prince likely approved the killing of Khashoggi, a U.S.-based writer, four years ago. His murder has loomed over Biden’s efforts to reset relations with Saudi Arabia.

Biden also announced that U.S. peacekeepers would leave the Red Sea island of Tiran by the end of the year, part of an agreement reached during what he called “a good series of meetings” in Jeddah.

Biden on Friday held a carefully choreographed meeting with Crown Prince Mohammed, the man he had once shunned for human rights abuses, as the two leaders sought to reset one of the world’s most important diplomatic relationships.

The encounter, which began with a fist bump as Biden stepped out of his presidential limousine, could reshape security partnerships in the Middle East and the flow of oil worldwide. 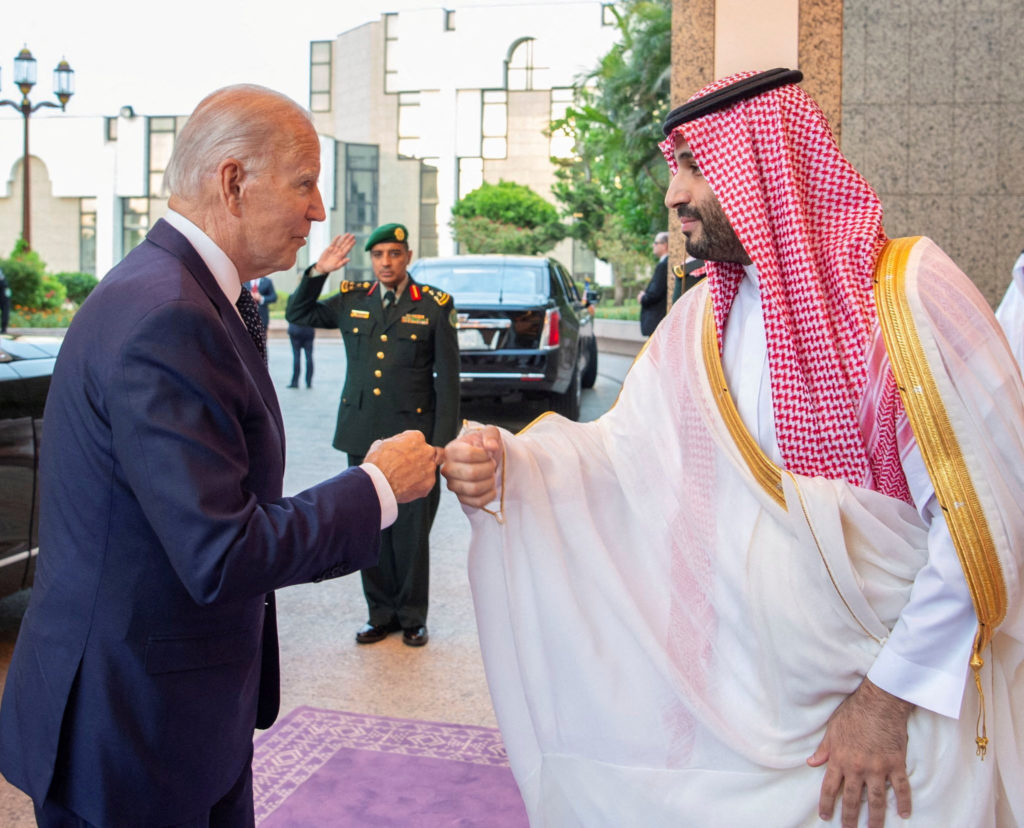 Biden’s three hours at the royal palace in Jeddah was seen as a diplomatic win for the crown prince, who has tried to rehabilitate his image, draw investments to the kingdom for his reform plans and bolster the kingdom’s security relationship with the U.S.

Biden seemed to approach it as a necessary if somewhat distasteful step to improve relations with the the world’s top oil exporter at a time of rising gas prices and concern about Iran’s nuclear ambitions.

The meeting drew outrage from critics who believed Biden was abandoning his pledges on human rights, particularly when it came to the murder of Khashoggi, a U.S.-based journalist who wrote for The Washington Post.

“The fist bump between President Biden and Mohammed bin Salman was worse than a handshake — it was shameful,” said a statement from Fred Ryan, the Post’s publisher. “It projected a level of intimacy and comfort that delivers to MBS the unwarranted redemption he has been desperately seeking.”

Khashoggi was killed by Saudi government agents four years ago, and a U.S. intelligence report said the crown prince likely approved the operation.

The United States played down expectations for any immediate increases in Saudi oil production, which could help alleviate high gas prices that are politically damaging to Biden back home. But the White House said it anticipated “further steps” over coming weeks that “will help stabilize markets considerably.”

The current OPEC+ agreement expires in September, opening the door to potentially higher production after that.

Rising gas prices, which were compounded by the Russian invasion of Ukraine, are one of the factors that prompted Biden to reassess his approach to Saudi Arabia.

The U.S. president had long refused to speak to Prince Mohammed, the presumed heir to the throne currently held by his father, King Salman. But those concerns have been eclipsed by other challenges, including Iranian aggression in the Middle East and the faltering effort to use diplomacy to prevent Iran from building a nuclear weapon.

At the same time, Saudi Arabia wants to strengthen its security relationship with the United States and secure investments to transform its economy into one less reliant on pumping oil.

The Saudis held a subdued welcome for Biden at the airport in Jeddah, with none of the ceremony that accompanied his earlier stop this week in Israel.

Biden was greeted by Mecca’s governor, Prince Khalid bin Faisal, and Saudi Arabia’s ambassador to the U.S., Princess Reema bint Bandar, and then walked down a lavender carpet that led to the limousine that whisked him to the palace.
The president sat down with King Salman, the 86-year-old monarch who has suffered from poor health, including two hospitalizations this year. Journalists were not allowed into the room, but the Saudis released video of Biden shaking hands with the king while the crown prince looked on.

Afterward, Biden and Prince Mohammed held a broader meeting with several advisers. The two men sat across from each other, an arrangement that burnished the perception that they are counterparts. It’s an image that the crown prince, known by his initials MBS, has been eager to foster as he solidifies his path to the throne after sidelining, detaining and seizing the assets of royal rivals and critics.

There had been considerable speculation about both the choreography and the substance of how Biden, who had vowed as a presidential candidate to treat Saudi Arabia as a “pariah” for its human rights record, would go about interacting with Prince Mohammed.

Access for journalists was limited. The White House traveling press corps was not present when Biden fist bumped the crown prince, and reporters were only briefly allowed into their meeting. Almost none of their remarks could be heard. Biden did not answer when reporters asked if he still considered Saudi Arabia a pariah, nor did Prince Mohammed respond to a shouted question whether he would apologize to Khashoggi’s family.

It’s unclear if Biden raised the issue of Khashoggi’s killing directly with Prince Mohammed, and he did not publicly commit to doing so before arriving in Saudi Arabia.

“My views on Khashoggi have been absolutely, positively clear. And I have never been quiet about talking about human rights,” Biden said earlier this week. “The reason I’m going to Saudi Arabia, though, is much broader. It’s to promote U.S. interests — promote U.S. interests in a way that I think we have an opportunity to reassert what I think we made a mistake of walking away from: our influence in the Middle East.”

On Saturday, he’ll participate in a gathering of leaders from the Gulf Cooperation Council — Bahrain, Kuwait, Oman, Qatar, Saudi Arabia and the United Arab Emirates — before returning to Washington. The leaders of Mideast neighbors Egypt, Iraq and Jordan are also to attend, and Biden’s national security adviser said Biden would make a “major statement” on his vision for the Middle East.

The Saudi visit is one of the most delicate that Biden has faced on the international stage. Any success in soothing relations could pay diplomatic dividends as the president seeks to ensure stability in the region.

But it could also open Biden, already floundering in the polls at home, to deeper criticism that he is backtracking on his pledges to put human rights at the center of foreign policy.

“If we ever needed a visual reminder of the continuing grip oil-rich autocrats have on U.S. foreign policy in the Middle East, we got it today,” tweeted Rep. Adam Schiff, D-Calif. “One fist bump is worth a thousand words.”
Khashoggi’s fiancee, Hatice Cengiz, said that, with the visit to Saudi Arabia, Biden was backing down on human rights.

“It’s a very huge backing down actually,” Cengiz told The Associated Press in an interview Thursday. “It’s heartbreaking and disappointing. And Biden will lose his moral authority by putting oil and expediency over principles and values.”

Saudi political analyst Turki al Hamad said he was not optimistic about the prospects for Biden’s trip.

“Biden and his team will come and set their eyes on the U.S. elections, and improving the Democrats’ situation by coming out with an agreement on increasing oil production,” Hamad tweeted, saying that “does not matter to the Saudi leadership.”

Aaron David Miller, a senior fellow at the Carnegie Endowment for International Peace and former U.S. State Department official, said Biden had looked forward to visiting Saudi Arabia “like I would look forward to a root canal operation.”

Miller contrasted Biden with his predecessor, Donald Trump, who visited Saudi Arabia on his first foreign trip. That visit was highlighted by the leaders gathered around a glowing orb and Trump briefly joining a ceremonial sword dance.

With Biden and Prince Mohammed, “there aren’t going to be a lot of sword dances or smiling photo ops or warm embraces,” Miller said.

Batrawy reported from Dubai, Knickmeyer from Sacramento, Calif., and Megerian from Washington.