What the government should learn from this pandemic, according to 7 economists

It’s been nearly 100 days since California became the first state to implement a stay-at-home order amid the pandemic, shuttering non-essential businesses curbing economic activity for what would be months. All but seven states soon followed, closing schools, retailers and entertainment venues, and sparking one of the country’s worst economic crises since the Great Depression.

Now, as states are reopening, the economy is adding back some jobs, but the effects of the pandemic and the recession it plunged the country into will likely be felt for years, said Peter Temin, an economics professor with the Massachusetts Institute of Technology.

Other experts commended the federal government for acting quickly to provide financial relief for individuals and businesses, but said the pandemic illuminates areas that need to be improved before the next crisis.

Prepare ahead of time and act quickly

With the coronavirus pandemic roiling financial markets and threatening the economy, the Federal Reserve in mid-March cut interest rates to near zero and bought billions in Treasury and mortgage bonds to stabilize the markets.

Lawmakers in Congress responded to the pandemic’s economic threat by passing a historic $2.2 trillion relief bill by the end of March that would provide one-time payments to millions of Americans, increase unemployment benefits, provide small business loans and more.

But the federal government could have taken steps to improve the health of the economy well before the pandemic, said Maya MacGuineas, president of the Committee for a Responsible Federal Budget. The government enacted a significant tax cut in 2017 as well as two large spending increases that raised the national debt, she said.

MORE: Why minority-owned businesses are struggling to get PPP loans

“That added trillions to the national debt and meant that we were at a point where the debt was as high as it has ever been as a share of the economy, other than just after World War II,” MacGuineas said. The lesson is to focus on lowering debt when the economy is strong “so that it’s easy to borrow when your economy is weak,” she said. Decisions made well before the pandemic put the government at a disadvantage when faced with an economic crisis.

On the health front, multiple economists said the government’s lack of preparedness for a major public health crisis also meant the economic blow was greater than it might have been. “I think everyone agrees that we got a late jump on this,” Douglas Holtz-Eakin, president of the American Action Forum and a former economic director for the late Sen. John McCain’s 2008 presidential campaign.

Holtz-Eakin commended the federal policy in response to the pandemic, but said the delay in identifying the health threat prevented lawmakers from taking earlier action.

The government was slow to provide adequate testing, tracing and treatments, said Jared Bernstein, a senior fellow at the Center on Budget and Policy Priorities and former economic adviser to then-Vice President Joe Biden. “It’s been horribly mismanaged from the top and that’s a huge problem for the economy,” Bernstein said. The health response is inextricably linked to the economy because it determines whether essential workers can safely continue their jobs and affects when states can safely reopen businesses, he added.

Economist Lisa Cook said the federal government should have taken advantage of available resources like the Global Health Security and Biodefense unit responsible for pandemic preparedness. “It is beyond tragic that we had a unit within the White House to deal with pandemics, a playbook to deal with pandemics, and that we didn’t use that resource,” said Cook, an economics professor at Michigan State University who served as a senior economist on President Barack Obama’s Council of Economic Advisers.

In 2018, President Donald Trump’s administration reassigned members of the pandemic response team created by the Obama administration to different positions. Reports and testimony from federal health officials indicate that Trump’s administration also received multiple warnings about the potential impact of the virus in early January, two months before the White House took significant steps to combat its spread. The country’s Strategic National Stockpile manages medical equipment like ventilators and masks in preparation for a public health emergency like the current pandemic, but the federal government failed to sufficiently replenish the stockpiles before Trump took office. 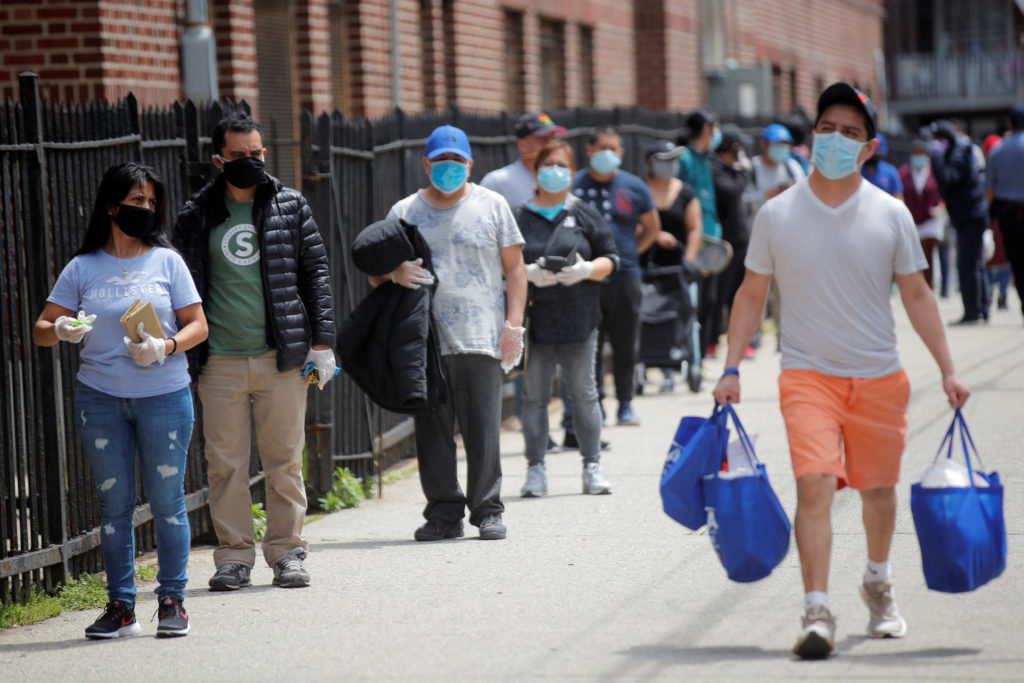 People wait in line at a food bank at St. Bartholomew Church, during the outbreak of the coronavirus disease (COVID-19) in the Elmhurst section of Queens, New York City, New York, U.S., May 15, 2020. REUTERS/Brendan McDermid

Identify ways to improve the economic relief programs for Americans

Efforts to provide economic assistance throughout the pandemic have met a number of challenges economists hope lawmakers will learn from.

State unemployment systems were overwhelmed each week by waves of new claims, totaling about 40 million between mid-March and early June. By using the tax code to dispense economic relief payments, the Treasury Department also struggled to get money to everyone who was eligible, including low-income Americans who are not required to file taxes and those without bank accounts. Others, like adult dependents, did not qualify for money at all.

Concerns about the accessibility of relief assistance emerged during the last recession as well. Nina Olson, then a tax advocate with the IRS, testified before Congress in 2008 that non-tax filers face barriers affecting their ability to claim stimulus money. At the time, Olson said, “If Congress decides to enact another [economic stimulus package], it should consider how to simplify the eligibility rules, so that they lend themselves to easy communication.”

Olson suggested that for eligible individuals who do not have regular contact with the IRS — by paying taxes, for example — Congress should consider payment deliveries through other federal agencies like the Social Security Administration and Veterans Affairs.

For the CARES Act, the Treasury Department did use information from the SSA and VA to send payments, despite early confusion over how the veterans and Social Security beneficiaries would receive the money.

But ongoing difficulties with how the government distributes relief funds present an opportunity for lawmakers and officials to identify improvements that can be made before the next crisis, said Donald Marron, a fellow with the Urban Institute and a former economic adviser for President George W. Bush.

Marron recommends looking into ways to improve surge capacity for unemployment offices. He also said the U.S needs some reflection on how the country determines who is eligible for relief money and unemployment insurance during a widespread crisis.

For economic relief payments, Cook said a mobile money system, which may or may not be tied to traditional banks, depending on the platform, is one way the government can reach more people.

In the short-term, Cook recommends a platform like Zelle, which partners with banks and some credit unions to provide quick money transfers. Other experts said the Treasury Department can expand its use of prepaid debit cards for individual relief. In May, the department said it had distributed about 4 million of these cards instead of traditional paper checks.

“Nearly 7 percent of Americans do not have a bank account, and nearly 20 percent are underbanked — meaning they sometimes use places like check cashing stores or payday lending because traditional financial products are not tailored to their needs,” said Stacia Martin-West, assistant professor at the University of Tennessee College of Social Work. Prepaid debit cards are “more equitable and efficient to get the stimulus checks into the hands of people that need it most,” she said.

Government agencies also need to modernize their technological infrastructure, MacGuineas said, which federal and local governments could have done prior to the pandemic.

“We should have easier, more efficient and quicker ways to get money to people when they need it,” she said. “Our government systems, and our financial systems, and our banking systems for lower income people definitely need an overhaul.”

In times of widespread job loss, the federal, state and local governments should consider finding positions for people in their understaffed agencies and sectors, like agriculture, that provide essential services, said Temin of MIT. Other economists have called for similar proposals, such as a federal job guarantee.

Amid the financial strain, state and local governments have laid off workers and reduced budgets for services like firefighting and education, Bernstein said. He would like to see future legislation from Congress provide more fiscal support for governments to avoid cutbacks during economic downturns.

‘The more we do now, the stronger our recovery will be’

Despite their swift action in passing initial economic relief legislation, lawmakers are in danger of repeating a mistake from the 2008 financial crisis: not spending enough to help the economy recover, Cook said. In 2009, the $840 billion stimulus package signed by Obama during the Great Recession received criticism for being insufficient. The economy took 51 months to return to its pre-recession peak, longer than recovery periods from previous recessions.

The country tends to do “too little” in times like this, Bernstein said. “The more we do now, the stronger our recovery will be,” he said. “The danger is not that we’re going to overdo it, but we’re going to underreact to the extent of the economic contraction.”

When it comes to monetary policy, there’s only so much the Fed can do, Temin said. And providing fiscal policy to support the unemployed and lower income workers — through more relief money for small and minority-owned businesses, by providing additional unemployment benefits — will stimulate economic activity more than giving tax cuts to the wealthy, he added.

The CARES Act gave unemployment recipients an additional $600 weekly allowance, but that will expire at the end of July.

By focusing on monetary rather than fiscal policy, Trump risks becoming another President Herbert Hoover, Temin said. Many accuse Hoover of having an inadequate response to the Great Depression by resisting calls for government aid like food assistance to citizens. Hoover lost his reelection bid in 1932 to President Franklin Delano Roosevelt, who immediately began implementing economic relief and reform plans. Many of his programs are still in existence today, including Social Security.

Currently, another bill that would have addressed continued need, providing relief to workers, businesses and local governments, has stalled, having been passed by the Democratic House but kept off the docket in the Republican Senate. But Holtz-Eakin said lawmakers need to move beyond measures like the CARES Act because they don’t solve the problem of getting people back to work.

The country should find solutions for how to safely operate workplaces within the new reality of the pandemic, Holtz-Eakin said. This could involve rethinking how workplaces and businesses are configured, or providing necessary protective equipment. “We’ve got to figure out how to exist in this reality, he said. “Work is a huge part of American life and how we work now is unsettled. That’s something that should be focused on.”