What to watch in Biden’s 2022 State of the Union

When President Joe Biden delivers his first State of the Union address tonight, it will be to a nation in the throes of different crises.

There are ongoing concerns over the government’s response to COVID-19 pandemic. While protection measures – like mask mandates – relax and cases drop in many parts of the country, deaths continue. Russia’s attack on Ukraine is escalating. A new major climate report, released a day before, is an indictment on global leadership’s inaction to address the crisis. Voters are worried about rising inflation, and according to the latest PBS NewsHour-NPR-Marist poll, a majority of Americans – 56 percent – said Biden’s first year in office has been a failure.

Watch the NewsHour’s special coverage of State of the Union beginning at 7 p.m. ET here.

The PBS NewsHour’s Nicole Ellis talked with congressional correspondent Lisa Desjardins about the State of the Union tradition and what this moment means for Biden.

What will Biden address?

The White House has kept mum on what ultimately will be in the president’s speech. Though, count on some adjustments that cover Russia’s invasion of Ukraine.

While Russia’s threats are a concern, there are a number of domestic issues Biden will want to cover, including “some things that some of the Democrats in Congress really want him to talk about because they believe that their jobs are on the line,” Desjardins said.

This would include things that would be popular across the board, like lowering prescription drug prices.

And while Biden faced Republican obstinacy in Congress, it’s worth noting there were a few significant bills that were passed under his administration, such as the American Rescue Plan and the Infrastructure Act.

Expect Biden to tout all the gains from those efforts, Desjardins said.

“I wouldn’t be surprised if we saw some guests or some acknowledgements to very specific bridges, specific stories of where that money has gone,” she added.

This would also divert attention away from the Build Back Better bill, which was in part tanked by Democratic Sen. Joe Manchin’s opposition.

Administration officials told reporters Monday to expect the president to lay out a plan that would lower costs for families — also a core goal of the stalled Build Back Better.

What do voters feel right now?

According to the latest NewsHour/NPR/Marist poll, U.S. adults are divided over what should be among Biden’s top priorities – from COVID and voting laws to foreign policy and violent crime – except for one clear No. 1: inflation.

Fifty-eight percent of U.S. adults don’t approve of how Biden has handled the economy, according to the poll. 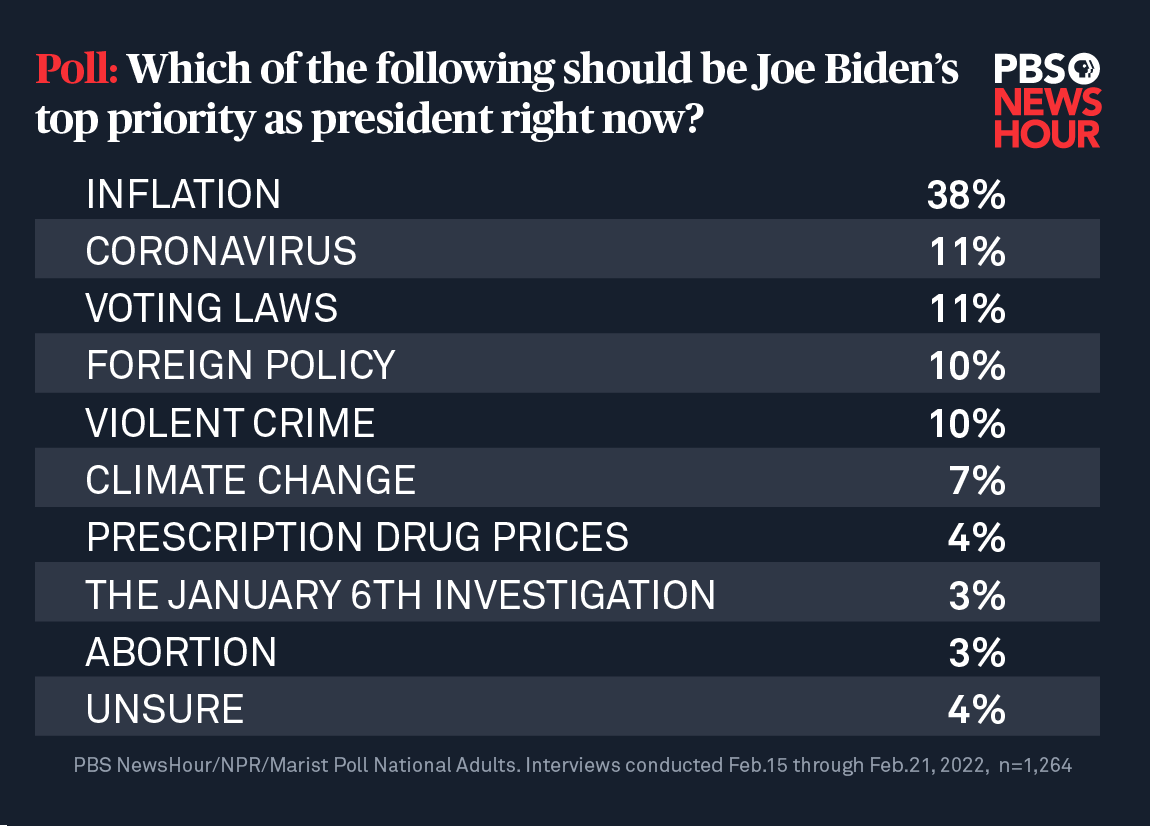 But public attitudes about the country’s economic outlook don’t quite match other points. Unemployment rates, another common indicator for assessing the health of the economy, remain quite low.

And as NewsHour health reporter and coordinating producer for polling Laura Santhanam noted in her story, 48 percent of U.S. adults said little has changed with their personal finances over the last year. For another 23 percent, their fortunes have improved.

That said, it bears repeating: Rising prices do affect people differently. And war can add to the worries over inflation.

A ‘difficult needle to thread’

With foreign policy concerns on the horizon regarding Russia, Biden has a “difficult needle to thread here,” Desjardins said.

This involves managing expectations – preparing the nation for gas prices to potentially keep going up, while supporting Ukraine in its defense against Russian forces. Biden will have to lay the case that we’re doing so for a reason, she said.

“It is about value, it’s about freedom. He has to convince Americans at that price they’re personally feeling is worth it in the sense of American values,” she added.

The PBS NewsHour will have special coverage of the State of the Union and Russia’s invasion of Ukraine starting with the 6 p.m. broadcast. Correspondents and a panel of experts will offer analysis during and after the president’s speech until 11 p.m. ET. Watch here.

Left: The PBS NewsHour’s Nicole Ellis talked with congressional correspondent Lisa Desjardins about the State of the Union tradition and what this moment means for Biden.