What we learned from the 2020 Democratic debates in Detroit

Former Vice President Joe Biden and Sen. Kamala Harris of California both struggled as they faced off again Wednesday in the second Democratic debate in Detroit.

Their fumbles, at points, made way for lower-polling candidates like Sen. Cory Booker of New Jersey to steal the show. But with the second round of debates now finished, the early dynamics of the 2020 Democratic field remain largely unchanged.

Biden is still the frontrunner in polls, but hasn’t succeeded in pulling away from his closest rivals, including Harris, though some candidates could enjoy the kind of post-debate spikes (and dips) that happened after June’s debates.

Here are some early takeaways from the second night of debates in Detroit, and how the primary field could shift going forward.

Biden was more commanding in Detroit than he was in his first debate last month. On the stage in Miami in June, Biden ignored his primary rivals and focused on Trump. The strategy backfired, however, and Wednesday night Biden was prepared to spar with his Democratic opponents.

But the results were mixed at best. Biden struggled to defend his lengthy Senate record on a number of issues, including criminal justice, trade and foreign policy. Biden did not fare much better when he was asked by a debate moderator about the Obama administration’s decision to deport hundreds of thousands of undocumented immigrants during President Barack Obama’s first two years in office. Biden dodged the question, and then dodged the issue again when New York City Mayor Bill de Blasio asked him, repeatedly, if he thought the deportations were a good idea.

As other candidates piled on, Biden fell back on his defense that Obama had dealt with several problems simultaneously, not just immigration, when he became president. “Everything landed on his desk but locusts,” Biden said of Obama. But it was a weak line. Julian Castro, a former Obama administration Cabinet member, dismissed it easily, along with Biden’s immigration plan.

“It looks like one of us has learned the lessons of the past, and one of us hasn’t,” Castro told Biden. Castro added, “What we need are some politicians that actually have some guts on this issue.”

Coming off a lackluster performance in the first debate, Biden needed a knockout performance Wednesday to convince voters he’s the clear favorite to win the nomination. He didn’t deliver it.

Biden may not have been at his best. But his struggles were somewhat obscured when Harris — who had delivered a largely flawless performance last month in Miami — also faltered.

The California senator had difficulty explaining her new health care plan early on in the evening, after Biden argued it would end private health insurance. Harris eventually recovered and went back on the offensive, but she appeared unable to clearly articulate where she stood on an issue for the first time in the 2020 debates.

Harris also came under fire later on for her record on criminal justice during her time as the attorney general of California. This time, Harris responded to the criticism from her rivals with a more forceful defense of her record and views.

“As the elected attorney general of California, I did the work of significantly reforming the criminal justice system of a state of 40 million people,” Harris noted — adding, “I am proud of that work.” She contrasted her work to politicians who give “fancy speeches” but don’t get things done.

By the end of the night, Harris seemed to regain her footing. And the fact that she received more criticism from other candidates than anyone on stage besides Biden only reinforced her position as a leading contender. But Harris likely did not have a strong enough debate to change her position in the polls.

After two robust conversations on health care in back-to-back debates in Detroit, the candidates who back a Medicare for All system appear to be gaining the upper hand on an increasingly divisive issue for Democrats. 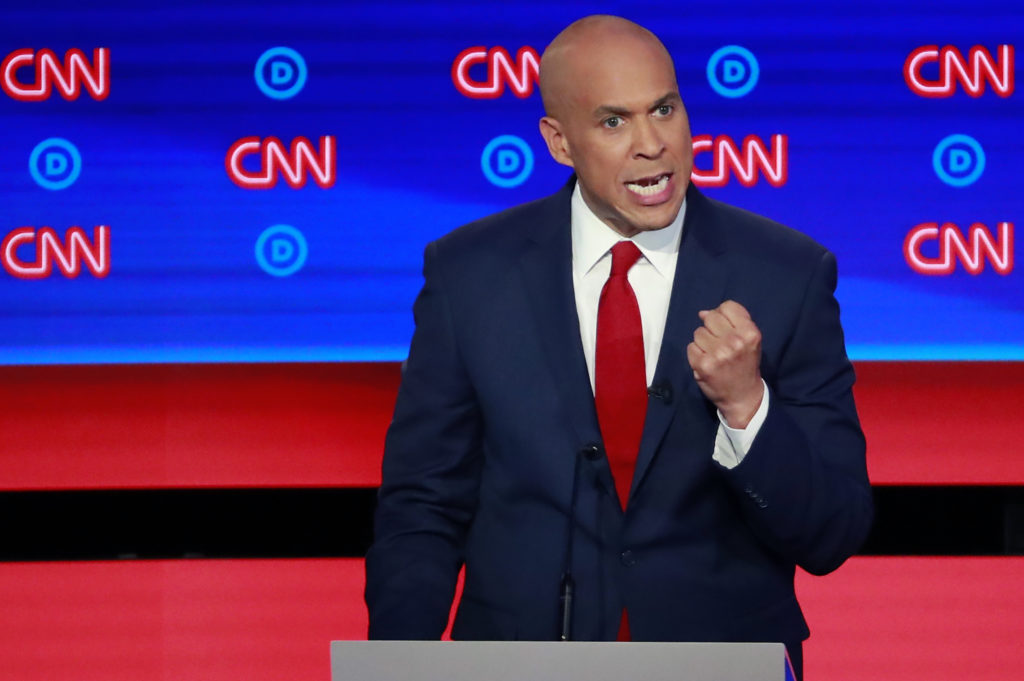 On Wednesday, Biden and Sen. Michael Bennet of Colorado were the only two candidates saying that improving the Affordable Care Act was a better solution than replacing the health care law with a government-run system. Biden said he would “build on Obamacare” by adding a public option that gives patients a choice to join a government health care plan. Bennet argued that Democrats who back the Medicare for All plan floated by Sen. Bernie Sanders of Vermont were not being forthcoming with voters about how much the system would cost.

“We need to be honest about what’s in this plan,” Bennet said, noting that the bill Sanders introduced in the Senate would cost more than $30 trillion.

The position will likely appeal to moderate voters who think the approach is too progressive, or who like their current health care and fear losing it. But it’s a general election argument that might not work in the Democratic primaries. The prevailing view in the primary field seems to be that anything less than universal health care is unacceptable. De Blasio underscored the point.

“This should be the party that says we stand for universal health care,” de Blasio said at one point. It now seems the majority of his 2020 rivals agree.

Booker delivered a standout performance Wednesday night. He was engaged on the issues and seemed in control during a number of tense exchanges with Biden, including on the issue of criminal justice reform. When Biden criticized Booker’s record as mayor of Newark, New Jersey, Booker responded with one of the most memorable lines of the night.

“There’s a saying in my community: ‘You’re dipping into the Kool-Aid and you don’t even know the flavor,’” Booker said. The zinger cut right to the heart of one of Biden’s greatest challenges: running as a white man in the most diverse presidential primary field in U.S. history.

Booker supporters will point to that moment, among others throughout the night, as proof that the senator can claw his way back into the race. But it may be too late for him to make up ground. When Booker entered the race he was seen as a possible frontrunner; months later, he hasn’t risen in the polls.

Booker’s candidacy highlights the challenges candidates face in such a crowded primary field. So far, primary voters appear willing to focus attention on a small handful of candidates at the top. Booker and the rest of the second-tier candidates – including South Bend Mayor Pete Buttigieg and Sen. Kirsten Gillibrand of New York, who also delivered strong performances in Detroit – haven’t broken through. If these early debates don’t change that dynamic, what will?