Who is Kevin McAleenan, acting head of Homeland Security?

As U.S. Customs and Border Protection commissioner, Kevin McAleenan has taken a leading role in implementing President Donald Trump’s immigration policy. But in his new role as acting Homeland Security secretary, announced in a presidential tweet Sunday evening, it’s unclear whether he would be willing — or able — to potentially push the boundaries of the federal law to meet the president’s hard line on immigration.

Trump’s announcement Sunday that Kirstjen Nielsen would be leaving her role as secretary Wednesday after serving for more than two years was unexpected.

According to some reports, her resignation reflects the president’s wishes to take an even more hardline approach to stopping the flow of migrants into the country. Nielsen was heavily criticized for carrying out a number of Trump’s policies, but she often noted the limitations her agency faced under federal law and seemed unwilling to pursue actions that went further, such as reinstating the practice of separating families at the border.

A judge ruled last year that the Trump administration was legally required to reunite the more than 2,700 children it had separated from their families. (And reports since have suggested that number may be much higher.)

Earlier this year, another judge denied the Trump administration’s request to order the deportations of Central American migrants who failed to show up for their initial hearings. Lawyers said the immigrants, who were forced to wait in Mexico before their hearing, were given the wrong court dates.

While hardliner Stephen Miller appears to be seeking more influence over Trump’s immigration policy, current and former officials at the Department of Homeland Security told the PBS NewsHour’s Yamiche Alcindor that many of the changes Trump wants, such as changing the process for asylum seekers, likely cannot be done under current law. (In fact, some legal scholars have questioned whether appointing McAleenan as acting Homeland Security secretary violates federal law.)

DHS source tells me that they expect Pres Trump to remain frustrated w/ DHS after Nielsen because many of the things Trump wants to do like changing process for asylum seekers & penalizing parents for bringing their kids with them to seek asylum can’t be done under current laws.

McAleenan started on the path of government service after 9/11, when he joined the U.S. Customs and Border Protection — then known as U.S. Customs Service — as the executive director of the agency’s antiterrorism office and then as the CBP’s director of security operations for the Los Angeles International Airport. In 2008, he left CBP to work at a consulting firm, but rejoined the federal agency two years later. He rose up the ranks at CBP before being tapped to lead it last year.

As CBP commissioner, McAleenan defended his agency’s use of tear gas on immigrants and called for more funding to address what Trump has declared a national emergency on the U.S.-Mexico border.

But McAleenan has also bucked the president in the past by supporting aid to Central American countries — something Trump said in March he wanted to cut.

The question now is whether McAleenan will stand up to Trump in his new position.

“I would hope that his sense of integrity and recognition that the reputation that has developed over many years of public service should not be risked on behalf of policy that is not calculated to produce the desired result neither is consistent with the rule of law,” said Alan Bersin, who served as CBP commissioner from 2010 to 2011.

McAleenan’s promotion to lead the Department of Homeland Security comes at a turbulent time for the agency.

Late last month, federal agents apprehended more than 4,000 migrants along the southern border with Mexico on two separate days, according to Customs and Border Protection.

Homeland Security recently reassigned 750 Border Patrol inspectors away from ports of entry to handle the large numbers of migrants arriving each day in multiple cities, including El Paso and San Diego. The change resulted in hours-long wait times for cars and commercial vehicles at legal border crossings.

McAleenan had predicted the delays the week before, but said the reassignments were necessary to manage the “operational crisis.”

Robert Bonner, who headed CBP under the Bush administration and hired McAleenan in 2001, said the “humanitarian crisis” at the border is likely “the greatest challenge” McAleenan will face as head of Homeland Security.

WATCH: Mexico responds to some of Trump’s demands on migrants

Trump also announced last week that he was cutting off aid for Honduras, Guatemala and El Salvador, which account for about 85 percent of Central American migrants to the U.S. The money, which was funnelled through nonprofit organizations, was aimed at improving life in the volatile regions in the hopes that their citizens would stay in their home country rather than making the journey to the U.S.

McAleenan has supported aid to the nations. In December, he told ABC News that the U.S. needs “to invest in Central America.” 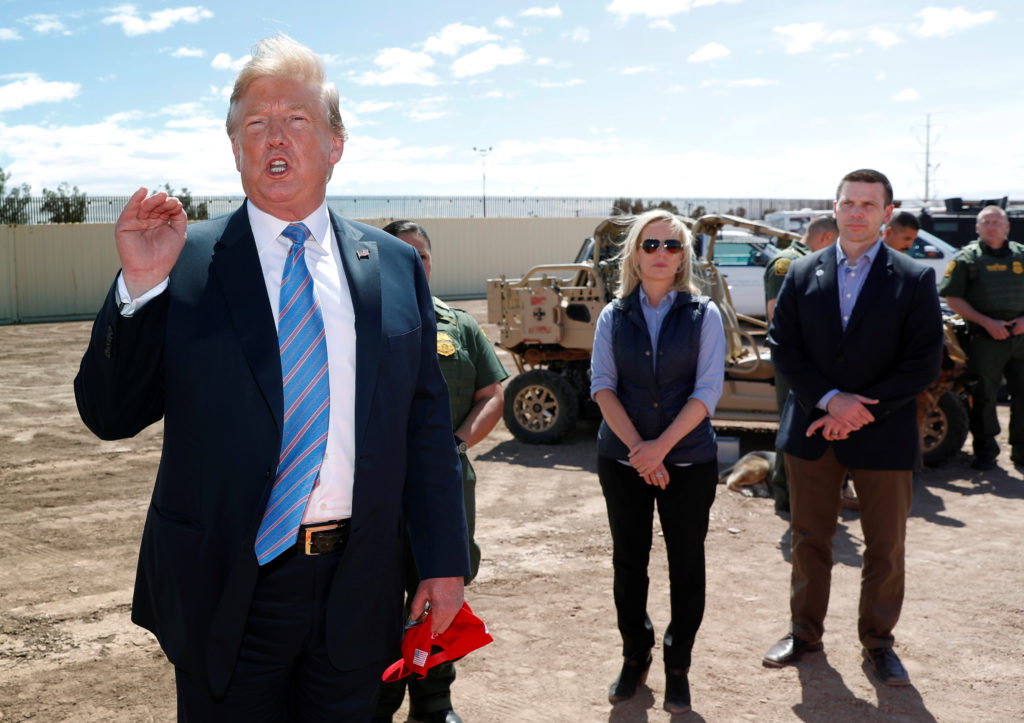 Homeland Security Secretary Kirstjen Nielsen and commissioner for Customs and Border Patrol Kevin McAleenan listen to U.S. President Donald Trump speak during a visit to a section of border wall in Calexico California, on April 5, 2019. During his visit, Trump said the U.S. could not take any more migrants becaue the country was “full.” Photo by Kevin Lamarque/Reuters

At the same time, McAleenan has showed a willingness to take controversial steps to control the flow of migrants.

McAleenan oversaw the Trump administration’s now-reversed practice of separating migrant children from their families. He told the New York Times that total family crossings were down after the practice was implemented but stopped short of calling it a “success.”

Former CBP commissioner Bersin said he hopes McAleenan now realizes that separating families was ineffective and a “moral stain on the nation.”

“I expect that he learned that lesson and would be surprised if he resorted to that again that is even if the president ordered him to do that,” Bersin said.

McAleenan has said the only way to truly address the immigration issue is for Congress to enact more widespread immigration reforms.

He has blamed a legal “loophole” for the increase in migrant families looking to cross the border and said the law meant there “are no consequences” for families and their children who are apprehended.

At a congressional hearing last year, McAleenan also defended his agents’ use of tear gas, saying some of the migrants were “assaultive” in their behavior and that his agents were put in a difficult position.

Gil Kerlikowske, who was CBP commissioner under the Obama administration, with McAleenan as his deputy, said he strongly disagreed with the decision, though he understands why McAleenan would want to give his agents the “benefit of the doubt.”

How have leaders reacted to McAleenan?

Others who have worked with him say he has earned their respect.

“I can count on one hand the number of people who have impressed me as much as Kevin McAleenan,” Kerlikowske said.

Following the news on Sunday of Nielsen’s imminent departure, some Democratic lawmakers reserved judgment. House Speaker Nancy Pelosi said in a statement that the next Homeland Security secretary should “respect the sanctity of families” and “restore sanity” to the Trump administration’s immigration policies.

But Rep. Joaquin Castro, the chair of the Congressional Hispanic Caucus, quickly expressed skepticism of McAleenan.

“He cannot be trusted as Acting DHS Secretary based on his record of prioritizing Trump’s harmful policies that undermine national security and the economy, and hurt vulnerable families and children at the border,” Castro, D-Texas, said in a statement.

Castro has been critical of McAleenan in the past, most notably for his handling of the deaths of two migrant children in CBP custody.

McAleenan called the deaths an “extraordinarily rare occurrence” and a “tragic loss.” He told CBS that CBP needed more money for mental and physical health care at immigration detention facilities.

“Our stations are not built for that group that is crossing today. They were built 30, 40 years ago for single adult males, and we need a different approach,” he said.

CBP began investigations into the deaths, and Nielsen promised federal agents would provide children a more thorough assessment as soon as possible after being apprehended.

Castro was not satisfied with the response and called for McAleenan’s resignation, in part because McAleenan failed to notify Congress about the first migrant child’s death within 24 hours as required by federal law. McAleenan said under his watch, CBP has since expanded its medical aid to migrants, but has warned it comes at a cost to other law enforcement efforts.

The American Civil Liberties Union, which has filed a number of lawsuits against Trump’s immigration actions, has expressed its own concerns about McAleenan leading Homeland Security.

“The fact that Kevin McAleenan will serve as acting secretary provides no reassurance,” the group said, accusing him of overseeing “countless” Border Patrol abuses.

Trump has not indicated whether he will nominate McAleenan or someone else to head the Department of Homeland Security permanently. Whoever he chooses will be required to receive Senate confirmation.