3 major moments from the ‘golden’ decade of black holes

Black holes are some of the most enigmatic objects in the universe. They are immense amounts of matter densely packed into an impossibly tiny area, creating a gravitational force so strong that not even light can escape. That means one cannot observe them directly, which makes learning their secrets a tricky endeavor.

But researchers and theorists have made huge strides over the past 10 years when it comes to better understanding these elusive celestial phenomena. In the last five years alone, we have “heard” two black holes collide, gotten closer to understanding how they might store information and seen the first-ever image of a black hole.

To help illustrate why, let’s zoom back in time to three decade-defining advancements in the ongoing effort to unravel these mysteries.

2019: We imaged a black hole for the first time

On April 10, 2019, the Event Horizon Telescope released the first-ever image taken of a supermassive black hole that sits at the center of Messier 87 (M87), an elliptical galaxy about 55 million light-years from Earth.

“This was a Herculean task,” National Science Foundation director France Córdova said that day at a news conference announcing the image’s creation.

The Event Horizon Telescope is an international collaboration of researchers launched in 2009 that aims to turn the Earth into a telescope. By coordinating eight radio telescopes across the globe, the project can collect radio waves from just outside an event horizon — the last boundary before the oblivion of a black hole. In April 2017, researchers recorded data from those telescopes over the course of one week and spent the next two years analyzing their results.

The telescope generated an image of the last orbit that photons — the basic units of light — can take before plunging into a black hole.

READ MORE: Here is the first photo of a black hole

M87 and Sagittarius A*, the black hole at the center of our Milky Way galaxy, are the only two supermassive black holes that are close enough for the Event Horizon Telescope to resolve these photon orbits. M87 weighs approximately 6.5 billion times the mass of our sun, and it takes about a month for something to move all the way around the black hole. Researchers can combine all of the data taken during one night of observation to create a static image, Doeleman explained.

We’ve just taken our first glimpse of a black hole. And it’s just going to get better and better.

Over the next decade, Doeleman said his team will launch a new program called “The Next Generation Event Horizon Telescope.” That program will coordinate additional telescopes around the globe and increase how often the Event Horizon Telescope can detect radio waves from black holes, which in turn will create sharper images.

The Event Horizon Telescope hopes to send radio telescopes into orbit around the Earth to create a virtual telescope that’s even larger than the planet itself. That expansion would also allow researchers to study new black holes.

”When Galileo made his first observations through a telescope, it wasn’t the end of astronomy — it was the beginning of astronomy,” Doeleman said. “And in this same way, we’ve just taken our first glimpse of a black hole. And it’s just going to get better and better.”

Stephen Hawking, one of the most famous theoretical physicists, died in 2018. But he continued to work on black holes using math until the very end of his life.

On Jan. 5, 2016, Hawking, along with co-authors Malcolm Perry and Andrew Strominger, published a paper titled “Soft Hair on Black Holes” that sheds light on one of the most compelling enigmas in theoretical astrophysics: the black hole information paradox.

Forty-five years ago, Hawking argued that once information enters a black hole, it’s lost forever. (Here, “information” is essentially the configuration of atoms that makes something what it is.) But that idea, to put it mildly, was controversial because it violates the concept of “determinism,” which posits that the laws of physics can be used to predict what happens next in any environment. 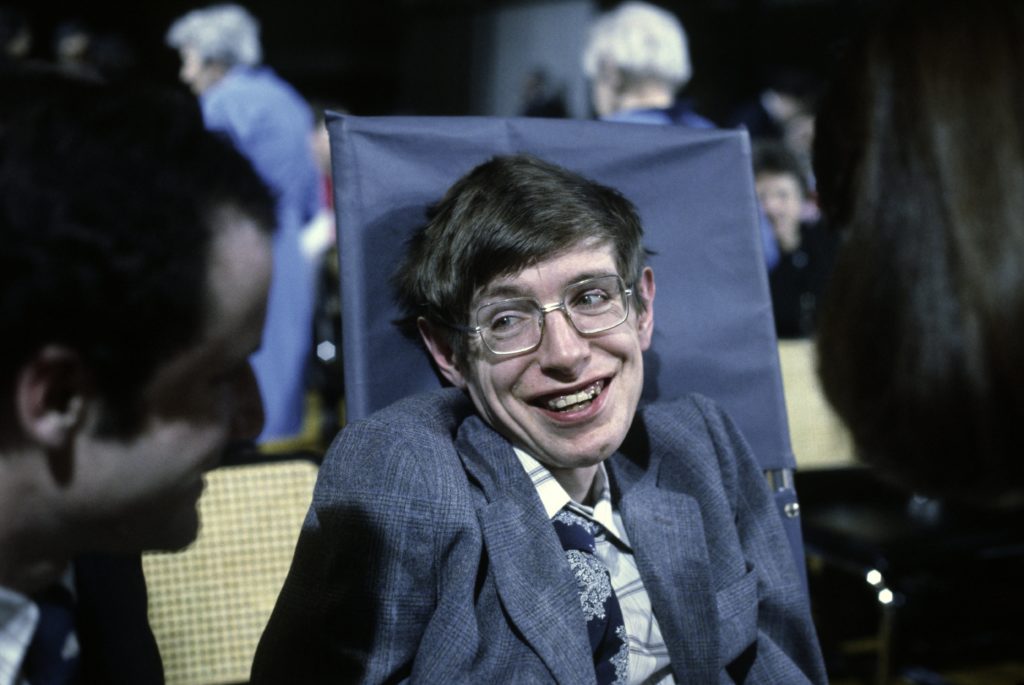 If information is lost when it enters a black hole, Strominger explained to the NewsHour, that would mean that we could no longer use it to determine the future or reconstruct the past.

But if black holes don’t destroy information, that means they must preserve it. This conclusion prompts two questions: First, how do black holes store information? Second, how does that information get in and out of a black hole?

Physicists have yet to answer those questions, but Strominger explained that with “Soft Hair on Black Holes,” he and Hawking and Perry made observations with a firm mathematical footing that could help solve the paradox.

The idea refers to a phrase coined by physicist John Wheeler in the 1960s, “black holes have no hair.” Hair in this context isn’t the stuff that grows on your head, but refers to any kind of distinguishing feature, and Wheeler had argued that black holes are featureless. The absence of “hair” would imply that all black holes are the same except for their mass, charge and angular momentum.

Hawking, Perry and Strominger examined the structure of a black hole’s event horizon and discovered “very subtle, hidden information” regarding how the black hole itself is attached to the spacetime that surrounds it. 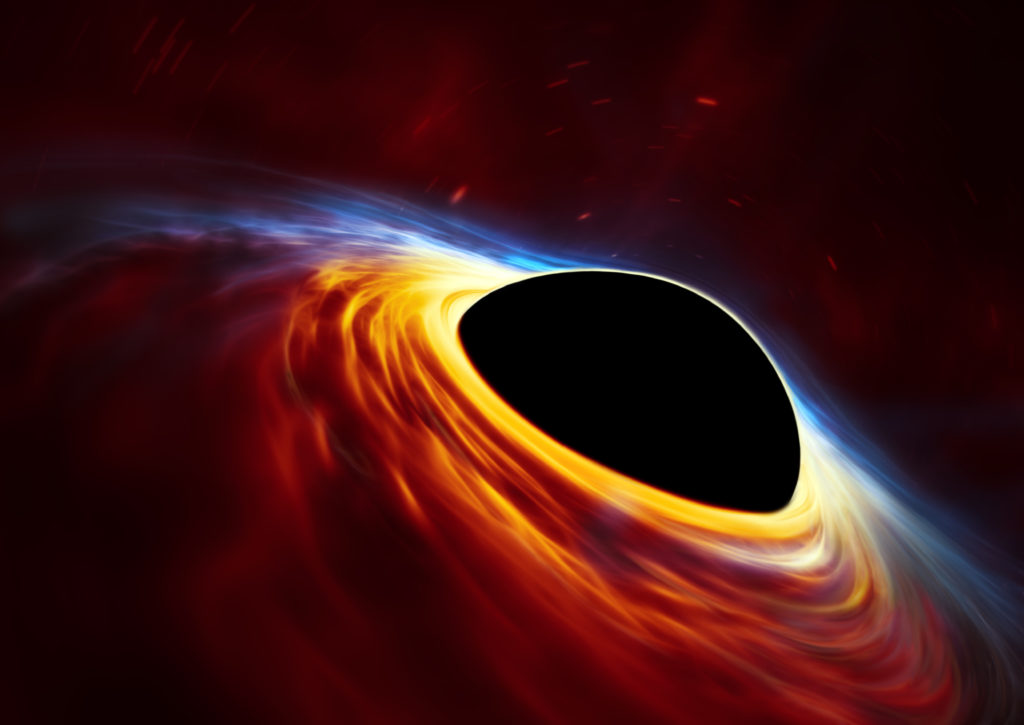 This is not an actual image of a black hole. This artist’s impression depicts a rapidly spinning supermassive black hole surrounded by an accretion disc.
This thin disc of rotating material consists of the leftovers of a Sun-like star which was ripped apart by the tidal forces of the black hole. Shocks in the colliding debris as well as heat generated in accretion led to a burst of light, resembling a supernova explosion. Illustration and caption by European Southern Observatory, European Space Agency, M. Kornmesser

That information doesn’t carry any energy, but the three concluded that it does carry “other kinds of conserved charges” that they called “soft hair.”

This soft hair is substantial enough to be arranged in a specific “hairdo,” or a distinguishing feature that makes the black hole unique, the paper states.

READ MORE: What Hawking meant when he said ‘there are no black holes’

“When you throw something into a black hole, it rearranges the hairdo before it disappears and it leaves the information on the surface,” Strominger explained.

Hawking proposed in 1974 that black holes can slowly evaporate through a process now known as “Hawking radiation.” Soft hair and evaporation suggest a black hole could eventually shed its information, Strominger said, much like water vapor rising from a shrinking puddle on a hot day.

Strominger added that seeing the image taken by Event Horizon Telescope meant a lot to him, both psychologically and practically. Having spent decades studying an object that had never been seen before, he said that visual evidence brought him a sense of relief.

2015: We confirmed a major Einstein theory by detecting gravitational waves

More than 100 years ago, Albert Einstein’s general theory of relativity proposed that accelerating masses in the cosmos disturb the fabric of space and time, producing massive “ripples” called gravitational waves.

“A good analogy is imagining dropping a small pebble on a still pond, and you can see the ripples radiate out in circles from the center,” Albert Lazzarini, an astrophysicist with the LIGO Laboratory at Caltech, said. “That’s very much akin to what these ripples in space and time do as they move away from the disturbance where the pebble was dropped or where the stars annihilate or the black holes formed.”

But observing such an occurrence remained the stuff of dreams and hypotheses for physicists — until 2015. 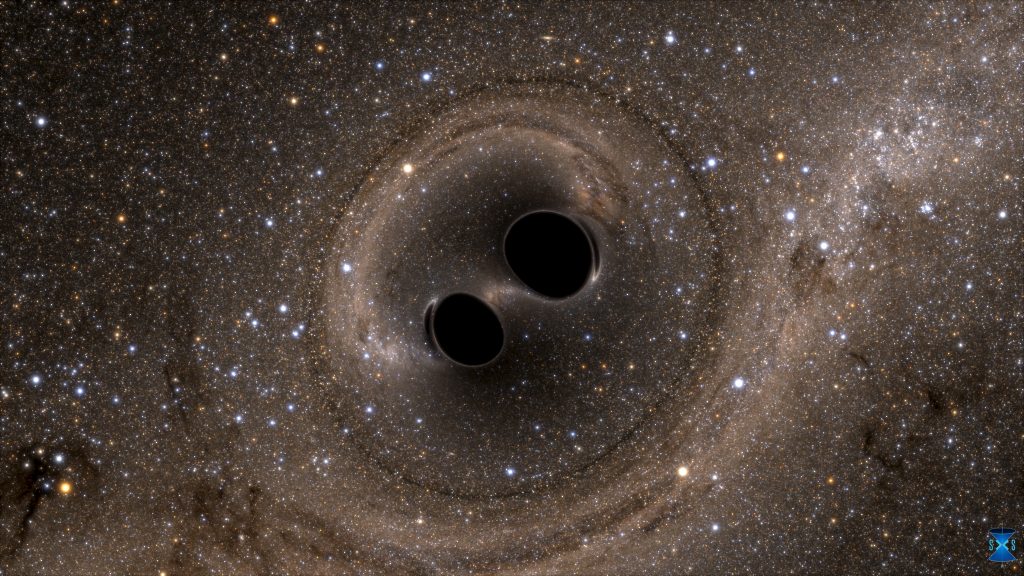 The collision of two black holes — a tremendously powerful event that was detected for the first time ever by the Laser Interferometer Gravitational-Wave Observatory — is seen in this still image from a computer simulation released in Washington February 11, 2016. The discovery marked the first
detection of gravitational waves — ripples in space and time hypothesized by Albert Einstein a century ago. Photo by REUTERS/The SXS (Simulating eXtreme Spacetimes)/Handout via Reuters

LIGO, or the Laser Interferometer Gravitational-Wave Observatory, is a pair of national facilities that detect the aftermath of “cataclysmic cosmic events” like the creation of black holes or the destruction of stars.

LIGO constantly scans the skies with two L-shaped interferometers. Featuring 2.5 mile-long arms, these interferometers use long beams of light to make extremely small measurements — on the scale of 0.0001th the width of a proton.

The two facilities — one in Washington and one in Louisiana — operate in unison to detect gravitational waves caused by these cosmic events. A team of European partners manage another interferometer in Italy.

When all three sites detect gravitational waves, researchers use the combined data to determine where in the sky those waves came from in a process called “triangulation.” LIGO can electronically process these disturbances into sound waves, allowing us to “hear” the gravitational waves.

LIGO’s original instrument, called “Initial LIGO,” operated from 2002 to 2010. After a significant upgrade that improved the sensitivity of the interferometers, the project reopened in 2015. About four months later, Lazzarini and his team observed their first event on Sept. 14 : the collision of two black holes. 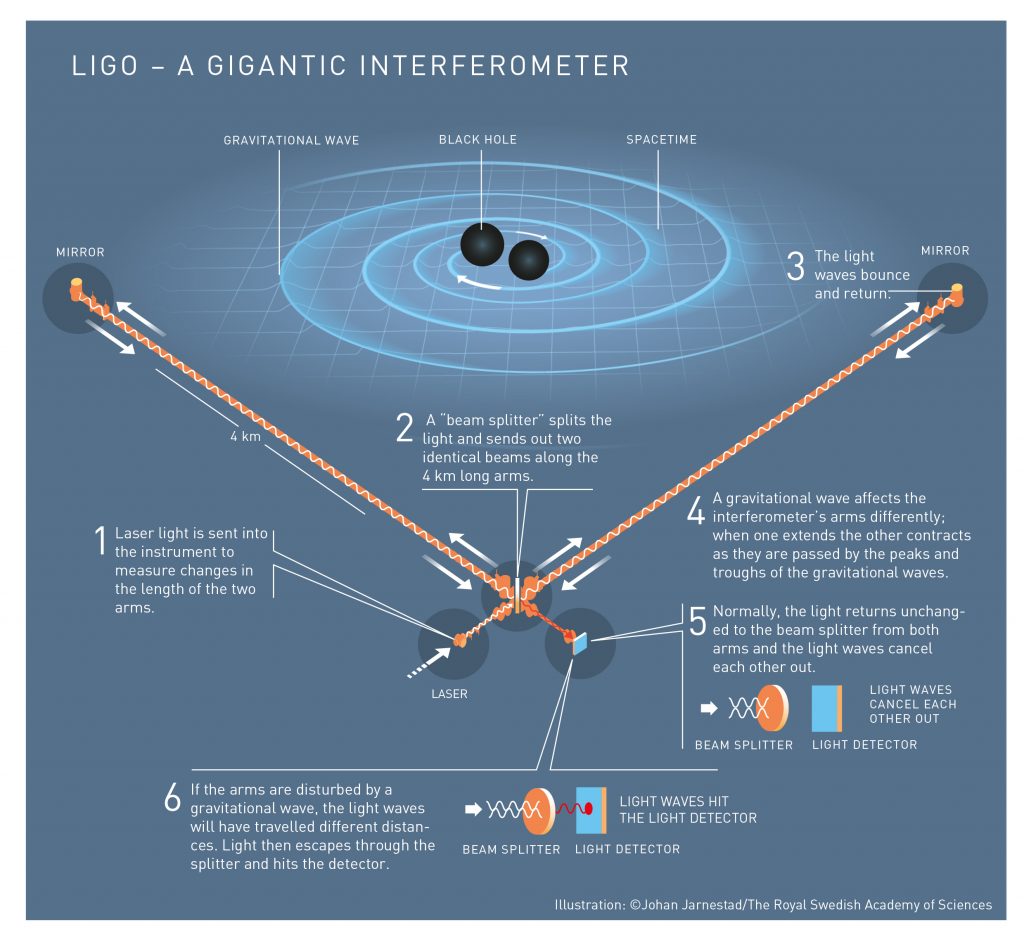 The world’s first captured gravitational waves were created in a violent collision between two black holes, 1.3 billion light years away. When these waves passed the Earth, 1.3 billion years later, they had weakened considerably: the disturbance in spacetime that LIGO measured was thousands of times smaller than an atomic nucleus. Caption and illustration by Johan Jarnestad/The Royal Swedish Academy of Sciences

These black holes were about 29 and 36 times more massive than our sun, and their merger “released 50 times more energy than all the stars in the observable universe.” The entire event lasted about one tenth of a second.

The project’s observation marked the first time that phenomenon had ever been detected. Since then, LIGO has observed 53 black hole mergers, according to Lazzarini.

“In 2015, they’d never been seen. And now some of the younger scientists say, ‘Oh, well, it’s just another black hole,’” Lazzarini said. “They are the most numerous sources we see out there, which is just amazing.”

The farthest event observed so far was about 3 billion light years away, and the universe itself is approximately 13 billion years old. In the future, Lazzarini hopes to observe events beyond “our galactic cosmic neighborhood.”

To do that, scientists will need much larger and more sensitive instruments than those used by LIGO. Lazzarini predicts that this next-generation of gravitational wave detectors will also be built on international collaboration.

“You develop a mutual respect and trust that says, ‘O.K., we’ll share our data because the whole is much greater than any one of its parts,’” he said.