3 things NASA is testing for its future moon base camp

Less than 40 miles from the Grand Canyon, NASA has been testing what daily life on the moon might feel like, including the commute.

Along the barren, volcanic landscape of northern Arizona, NASA’s Desert Research and Technology Studies (Desert RATS) tried out a prototype last month for a pressurized lunar rover that will travel with the Artemis mission when astronauts eventually return to the lunar surface.

The current vehicle offers a bumpy ride along the rough terrain, rolling along on six independently rotatable wheels, and has slightly more breathing room than a family van.

“If it were easy, everyone would be doing it.”

Tested in partnership with the Japan Aerospace Exploration Agency, it’s designed to take astronauts to “scientific sites of interest,” and allow them to work multiple days away from their home base, said Marc Reagan, Desert RATS program mission manager.

NASA has been using northern Arizona as a simulation site since the Apollo program in the 1960s. The similar rock composition and stark landscape makes for an ideal testing ground for astronauts and the equipment they’ll use in space.

Early Wednesday morning, NASA launched its Space Launch system, the space agency’s most powerful rocket ever, that’s designed to go to the moon and back as a test run for a future crewed mission. Artemis, approved by then-President Donald Trump in 2017, is expected to land the first woman and first person of color on the moon’s surface in 2025. But the mission has been criticized for running over schedule and billions of dollars over its anticipated budget, leading some to question why NASA wants to send people to the moon again after all these years anyway.

WATCH: Artemis rocket blasts off in big step toward returning astronauts to the moon

“It’s what we do,” said Jim Free, associate administrator for exploration systems development at NASA. “The moon contains a great deal of the history of the universe.”

Landing astronauts on the moon will not only further scientific understanding, but will also act as a stepping stone for eventually landing a person on Mars, and mapping out NASA’s longer-term “blueprint for solar system exploration,” Free said.

Reagan believes the cost is worth it, and that once people see the fruits of their efforts, they’ll believe that too.

“If it were easy, everyone would be doing it,” Reagan said. “I think we’re building an excellent product that the American people will be proud of.”

Here’s some of what the team has been testing.

Life on the road

The pressurized rover is designed to be a home away from (lunar) home for astronauts conducting extensive scientific projects.

Reagan explained that the final design of the rover will have to keep the crew warm, keep electronics cool, carry solar panels for recharging, have compartments for the crew to eat and sleep and be able to automatically drive itself to meet astronauts at various locations. 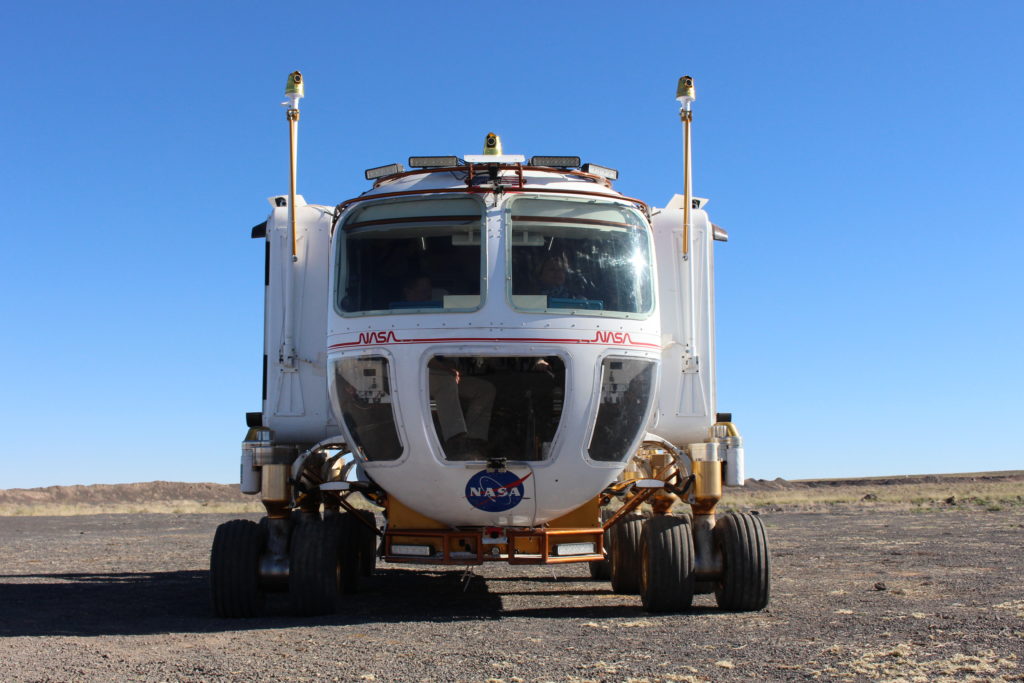 NASA’s eventual rover will be a home away from home for the astronauts. The current rover prototype has slightly more breathing room than a family van. Photo by Justin Stabley/PBS NewsHour

“It has to be the entire life support system by itself,” he said.

The prototype rover in Arizona sports a cockpit with a full windowed view of what’s ahead, where the pilot can control the vehicle’s wide range of motion with a joystick. The configuration of the wheels allows for the vehicle to move sideways like a crab or spin in a circle, helping the pilot to navigate the rocky, crater-pocked surface.

While it only has a handful of the expected final features, it still provides important data for the scientists to understand what kind of challenges astronauts may face.

One of the biggest problems right now, Free said, is calculating how long the rover, which will have a planned lifespan of 10 years, needs to operate in different conditions and scenarios. Figuring out the demands on the rover’s battery capacity, solar recharge time and storage supply capacity will ultimately factor into the final design.

“[So we] come up with a few of those scenarios and see which one of those puts the hardest design constraint on the vehicle and then design around that,” Free said.

The rover operators participating in the Desert RATS mission, some of whom are astronauts who have traveled to space, spent three days living in the vehicle to see what astronauts during a real mission may need and experience.

Reagan said the data will help them become “smarter buyers” for when they approach the contractor to build the final design, which he said they expect to have by summer 2023.

Communication on the moon

An essential part of living on the moon will be reliable communication between astronauts and their equipment, like the rover. On top of maintaining constant communication with Earth and other astronauts on the surface and in orbit, the pressurized rover is expected to function autonomously, and so must also relay information like an extra crew member.

NASA hopes to use similar wireless communication methods that we see on Earth such as WiFi and smartphones, allowing astronauts to interact with familiar technology.

Mike Zemba, NASA research engineer, said such technologies haven’t been truly tested in extraterrestrial conditions compared to the radio transponders used during Apollo, which makes it a unique challenge to predict how they might function on the moon. 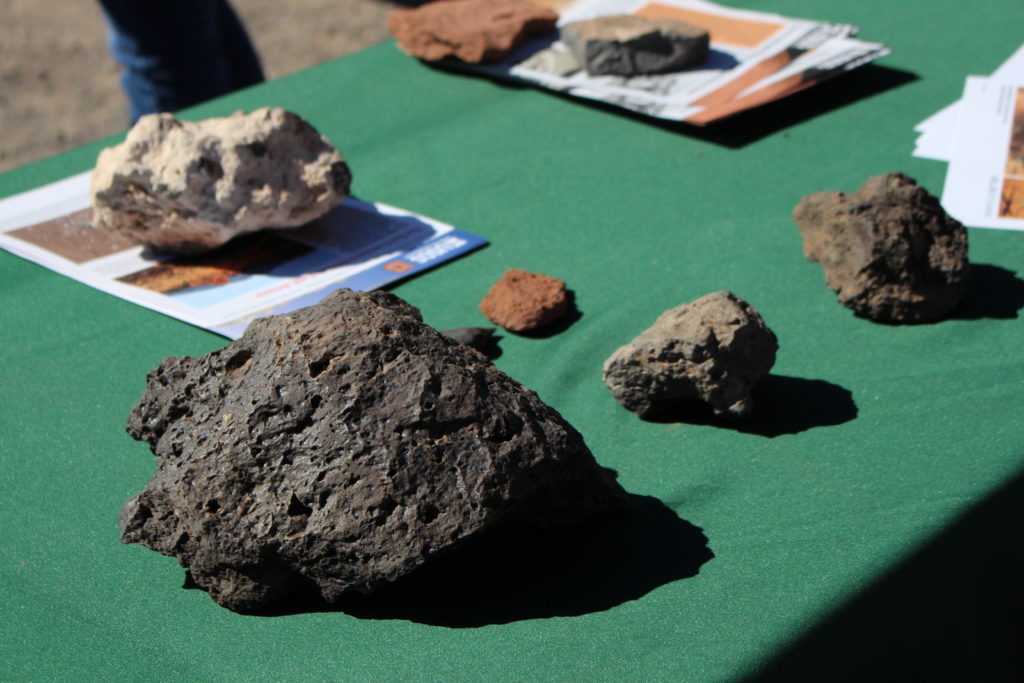 Volcanic rocks commonly found in northern Arizona where NASA’s desert RATS have been testing the prototype pressurized lunar rover and other equipment in 2022. Photo by Justin Stabley/PBS NewsHour

“We would like to lean into commercial technologies and all the development that’s been done over the past decades,” he said. “But we need to understand how that stuff is going to perform on the lunar surface.”

WATCH: What going to the moon taught Michael Collins about Earth

One of the main hurdles to building telecommunication infrastructure, Zemba said, is getting the signals across the massive topography on the South Pole.

Shackleton Crater, on the moon’s South Pole, is two and half miles deep, four times as deep as the Grand Canyon.

The other main challenge will likely be the radiation, which can scramble binary code, causing audiovisual data to appear choppy or cause programs to malfunction. The moon has little protection against the sun’s radiation, which means communication technology must be “radiation hardened,” using more resistant materials than what’s commonly used on Earth.

Zemba said being able to predict how far a signal can reliably go on the moon will be critical to the astronauts’ ability to travel far away from their home base and will help NASA plan for permanent communication infrastructure on the moon and Mars.

“Part of what we want to accomplish [in Arizona] is to have those simulation tools,” Zemba said. “We can determine the best points on the terrain to place cell towers to provide coverage for the missions.”

NASA has zeroed in on the lunar South Pole for its planned moon landing in 2025.

Free said the South Pole provides several different opportunities, compared to areas the early Apollo missions visited. From a geological perspective, he said, the rocks on the South Pole are estimated to be about 4.3 billion years old, which would help scientists delve into the history of the universe. From a practical perspective, there might be frozen, accessible water on the moon’s poles, which would be a convenient source for a long-term base.

The best way to handle problems during missions in space is to “have the patience to pause and do the right thing.”

While the Apollo missions landed on relatively flat areas of the moon, the South Pole sports massive craters and mountains that, Reagan said, cast “long deep shadows” because of the low angle light coming from the sun.

The high contrast between the brightly lit moon dust and long, black shadows could cause stress on an astronaut’s eyes and could be dangerous when walking on uneven terrain or driving the rover, he added. 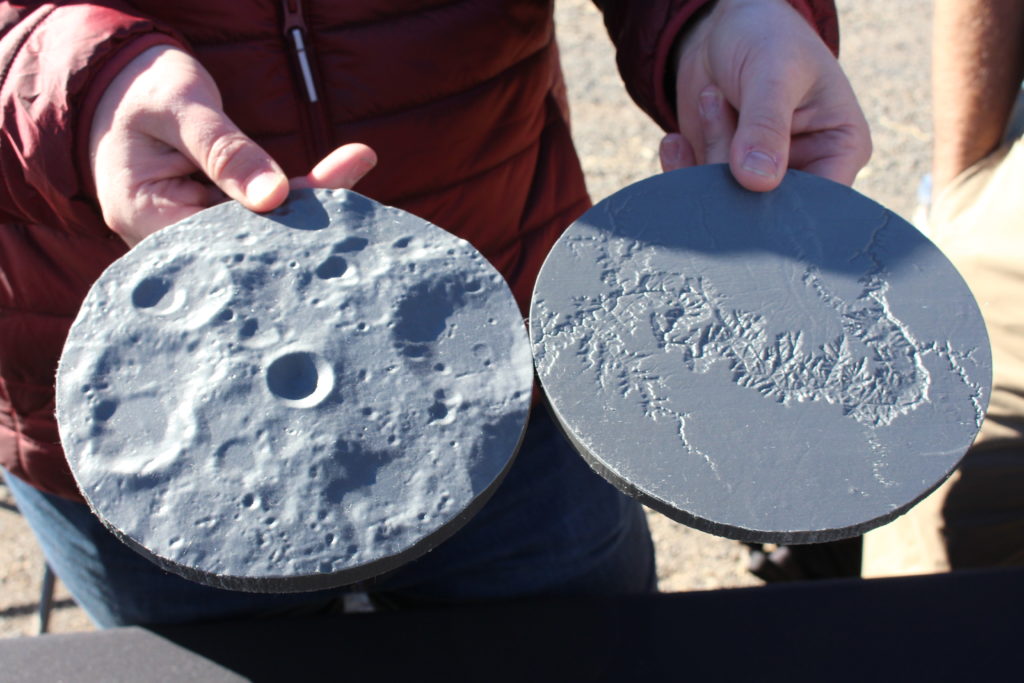 A visual comparison of the moon’s pockmarked South Pole compared to the Grand Canyon. NASA has been using northern Arizona as a simulation site since the Apollo program in the 1960s. Photo by Justin Stabley/ PBS NewsHour

On the moon, most of an astronaut’s sensory input comes through vision, Reagan explained, which means that stress-testing for the dramatic light conditions is extremely important.

“It’s kind of a treacherous place to operate,” Reagan said.

To simulate these effects, the Desert RATS have performed test missions entirely at night with a large, blinding spotlight cast across the rocky landscape.

Free said one of the proposed plans is to set up a series of smaller bases around the South Pole rather than one large base. If one base ends up in complete darkness as the moon rotates, taking off or landing on the surface becomes difficult. But with multiple landing zones, the astronauts can simply use a different base that’s still lit.

In most cases, Regan said, the best way to handle problems during missions in space is to “have the patience to pause and do the right thing.”

Left: NASA’s prototype pressurized lunar rover resting about 40 miles north of Flagstaff, Arizona. The rover and other aspects of human habitation on the moon were tested last month by a NASA team. Photo by Justin Stabley/PBS NewsHour