From drugged oysters to birds full of plastic, oceans are feeling the burden of pollution

Traces of life on land are increasingly showing up in oceans and in ocean life. Scientists are finding a growing presence of pharmaceuticals, small pieces of plastic and household chemicals in the bodies of Pacific razor clams, Pacific oysters and remote seabirds.

Researchers from Portland State University and the University of Alaska Fairbanks are presenting some of their findings at the 2018 Ocean Sciences Meeting in Portland.

KQED’s Brian Watt spoke with two of the presenting scientists prior to the Monday press conference: Elise Granek, professor at PSU and Veronica Padula, from the University of Alaska Fairbanks.

Watt: Dr. Granek, you and your students are looking for pollution from land, in sea life. What are you finding?

Granek: We are finding antibiotics, anti-fungal agents, and a chemical that’s used in detergents and counter cleaners and paints.

Watt: Is this popping up in all sea life? Or does it matter where the sea life is?

Granek: We are finding that for the pharmaceuticals, it does matter where they are. We see those compounds in oysters that we’ve transplanted to locations that are close to waste water treatment plant outfall pipes. 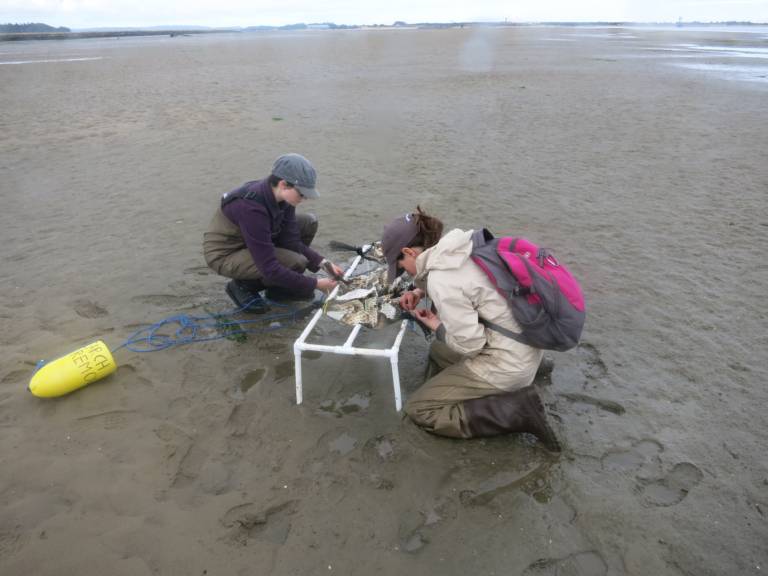 Portland State researchers Amy Ehrhart (left) and Ashley Vizek place a rack with bags of juvenile oysters on a mudflat in the Coos Bay estuary in Oregon in July 2016. These oysters were left in the field for one year and then taken back to a lab to be analyzed for pharmaceutical contaminants. Photo By Amy Ehrhart

Watt: What about the household chemicals?

Granek: As for the surfactants that we’re finding, it doesn’t seem to matter as much where the oysters have been transplanted. They seem to be so wide spread because they’re used in industrial and household applications, again in cleaners, in paints.

Watt: Are levels of these chemicals high enough to harm humans, if we eat these animals?

Watt: Do you think what you found, applies to the California coast as well?

Watt: I imagine that a lot of people along the California coast are going to want to know what they can do to help address this issue. What are your suggestions?

Granek: It’s really important for folks to properly dispose of their pharmaceuticals. Flushing pharmaceuticals down the toilet or down the sink, is a pathway for those pharmaceuticals to enter the marine environment. Instead, we would encourage folks to use drop boxes at pharmacies.

Watt: It’s not just drugs that are showing up in ocean life, plastics have reached even the most remote regions of the baring sea between Alaska and Russia.

Veronica Padula is a researcher at the University of Alaska in Fairbanks. As part of her work, she studies the stomach contents of seabirds. First of all, let me ask you why, and what do you find in there? 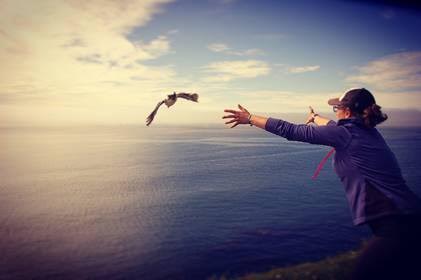 Padula: We look at the stomach contents of seabirds because we are working on trying to figure out why populations in the Aleutian Islands are declining, and we want to know what they’re eating beside food. In some cases, we are finding things that are not food like small pieces of plastic, which came as a surprise for us.

Watt: I assume this is a problem for birds to eat plastic?

Watt: Does this hold true for birds in California too?

Padula: Yes, almost globally seabirds are susceptible to plastic ingestion. Seabirds along California are equally susceptible to confusing plastic for food, and consuming it.

Watt: What can people do to help?

Padula: People can do lots of things to help. One of the biggest ways is to use fewer single use plastic items. Things like: bottles that are made of plastic, plastic bags, straws, utensils, coffee cups. If you can find a way to have a reusable item for any of those, that’s a huge step in the right direction.