2 earthquakes in 2 days: Is California closer to the ‘Big One?’

One day after a 6.4-magnitude earthquake struck Southern California, another earthquake, this one even stronger at 7.1-magnitude, hit Friday night.

No injuries were reported, but glass windows shattered, buildings cracked, amusement parks were evacuated and more, rattling people from Mexico to Las Vegas who were already on edge.

It was the biggest aftershock from the past two days, which might lead to questions and concerns moving through the minds of Southern California residents. The last magnitude 7 quake to hit this region happened in 1999, so people may be wondering if Friday’s event was an aftershock to July 4, the main quake or even a prelude to a long anticipated “Big One.” (It’s not).

Was Friday’s 7.1 earthquake an aftershock of the one on July 4? Does it matter?

Not really. The “foreshock-mainshock-aftershock” system is considered overly simplistic by seismologist Susan Hough from the U.S. Geological Survey.

After any seismic event, most subsequent shakes will be of lower magnitude, but there’s always a small chance of a larger quake, such as the one that occurred on Friday night.

Geologically, the 6.4 event on July 4 kicked off what’s known as an earthquake sequence — causing nearly 100 weaker aftershocks within 24 hours. This initial sequence contributed to the rupture that caused Friday’s 7.1 quake, and Hough is now wondering if the same fault broke twice in two days, which would be unusual.

But by convention, Friday’s 7.1 earthquake will now be called the mainshock — rather than an aftershock — because it’s the largest event so far in this earthquake cluster. It has now also started its own separate earthquake sequence. 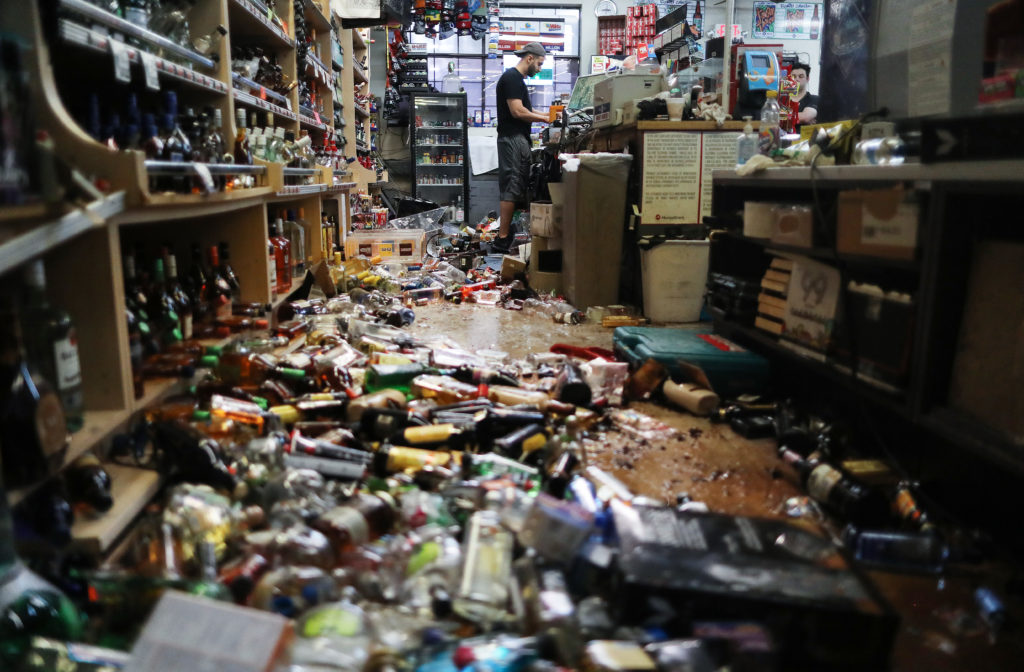 An employee works at the cash register at Eastridge Market, near broken bottles scattered on the floor, following a 7.1 magnitude earthquake which struck in the area, on July 6, 2019 in Ridgecrest, California. The earthquake, which occurred July 5th, was the second large earthquake to hit the area in two days and the largest in Southern California in 20 years. The store has remained open since the 7.1 earthquake struck in an effort to serve the community. Photo by Mario Tama/Getty Images

Will these strong earthquakes keep coming?

Possibly, but not likely.

After one earthquake, it becomes more likely that future quakes will happen in that area. That’s because earthquakes happen when tectonic plates — and the seismic fault lines where they smash into each other — are relieving stress. Geophysicist Mika McKinnon compares the situation to a pile of puppies:

“As one pup moves, the others squirm around to get comfy. The bigger the puppy (higher magnitude quake), the more movement to reshuffle (more aftershocks).”

But as mentioned above, when any earthquake happens, the subsequent shakes are typically weaker, not stronger.

To illustrate, here are the odds there will be more strong earthquakes — magnitude-6.0 or above — given Friday’s event

Still, since this region is currently experiencing two earthquake sequences at the same time (the one caused by the 6.4 quake on the Fourth of July and the one caused by the 7.1 shake on July 5), residents should prepare for a boatload of aftershocks less than 6.0 magnitude.

The U.S. Geological Survey predicts a greater than 99% chance for a moderate earthquake (magnitude 5.0) within the next week. They also expect the region to experience 360 to 660 minor aftershocks (around magnitude 3.0) in the same amount of time..

Do these quakes mean the ‘Big One’ is upon us?

When it comes to California, the ‘Big One’ typically refers to major earthquakes — magnitude 6.7 or more on the San Andreas Fault.

The events of the past two days happened on a brand new fault line — Happy Birthday, America! — located about 95 miles northeast of the San Andreas Fault. This previously unknown fault line occurred in what’s known as the Eastern California Shear Zone (ECSZ).

This zone stretches from the southern portions of the Mojave Desert along the east side of the Sierra Nevada and into western Nevada — and has its own fascinating and violent seismic history.

A man looks into a fissure that opened in the desert during a powerful earthquake that struck Southern California, near the city of Ridgecrest, California, U.S., July 4, 2019. Photo by REUTERS/David McNew

“There’s a supervolcano there — the Long Valley Caldera,” Paul Caruso, a USGS geophysicist, told the PBS NewsHour. “That’s one of the more interesting things about this region.”

We’re not anticipating these events will cause a big earthquake on the San Andreas Fault.

All that said, geologists still predict a 62% chance that the San Andreas Fault may release tension in the next 30 years, with a destructive 6.7-magnitude or higher earthquake near Los Angeles and a 70% chance for a likewise disaster happening in the San Francisco Bay Area.

“We’re not anticipating these events will cause a big earthquake on the San Andreas Fault,” Caruso said. He said seismologists will spend the coming weeks plugging data from the ECSZ quakes into their prediction models for the San Andreas fault, but he doesn’t expect the forecast to change. 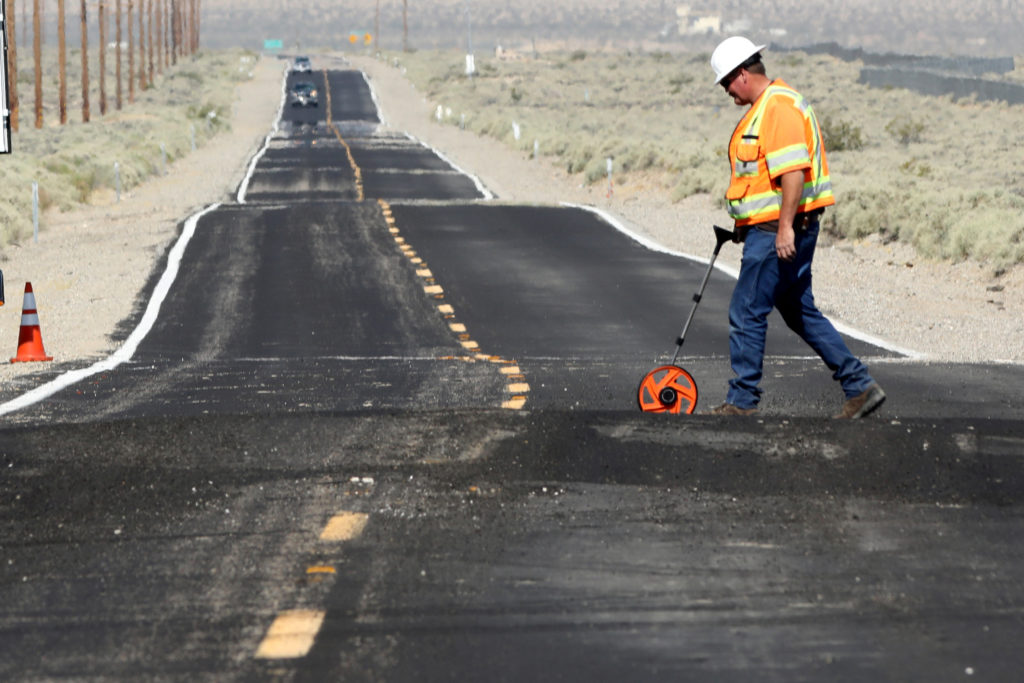 A worker takes measurements at a site where Highway 178 is distorted over newly ruptured ground after an earthquake broke, triggered by a previous day quake, in Southern California, east of the city of Ridgecrest, California, U.S., July 6, 2019. Photo by REUTERS/David McNew

But the ECSZ has a more recent history of releasing strong earthquakes. A quarter of the tectonic movement between Pacific and North America plates happens there, including two major earthquakes over the last 30 years: the 7.3-magnitude Landers quake in 1992 and 7.1-magnitude Hector mines shake in 1999.

What should I do if an earthquake happens?

Regardless of what you see on television or online, do not run from inside to outside while the earth is still moving. Caruso said that’s when the potential is highest for being hit by indoor debris.

“People just feel the shaking, and they run,” Caruso said, when it is actually better for them to duck and cover their heads with either their arms or a sturdy piece of furniture like a desk. “People die in earthquakes because stuff falls of them.”

He said only evacuate a building once the shaking stops. With hundreds of shakes expected over the next week, here’s a refresher on the best practices for an earthquake.

Left: Highway workers repair a hole that opened in the road as a result of the July 5, 2019 earthquake, near Ridgecrest, California about 150 miles north of Los Angeles, early in the morning on July 6, 2019. Southern California was hit by its largest earthquake in two decades on July 5, a 7.1-magnitude tremor that rattled residents who were already reeling from another strong quake a day earlier. Photo by Robyn Beck / AFP / Getty Images

As census goes to print, Trump administration isn’t giving up on citizenship question