How China is driving the future of electric cars 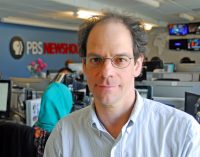 In China, the world’s largest emitter of greenhouse gases, putting more electric vehicles on the road is critical. Determined to become a world leader in the market, that nation has imposed a requirement that’s compelling international manufacturers to go more green. Special correspondent Katrina Yu reports as part of "China: Power and Prosperity," with support from the Pulitzer Center.

All stories from this series

Chaos and scrambling in the U.S. oil patch as prices plummet