BARCELONA, Spain (AP) — Catalonia and its riot-swept regional capital, Barcelona, were paralyzed Friday by a mix of strikes and marches as the northeastern Spanish region endured its fifth day of mass protests over the conviction of independence leaders.

More than 200 people have been arrested and scores injured since separatist sentiment swelled on Monday, when the Supreme Court sentenced to lengthy prison terms nine separatist politicians and activists. The nine had led a 2017 push for independence that triggered Spain’s deepest political crisis in decades.

Demonstrations on Friday were mostly peaceful, but police in anti-riot gear clashed in the afternoon with young protesters hurling bottles, eggs and paint at the gates of the police headquarters in central Barcelona. That followed a calm student protest earlier in the day.

Spanish central authorities said that at least 57 flights into and out of the region were canceled for the day due to a general strike called by pro-independence unions. 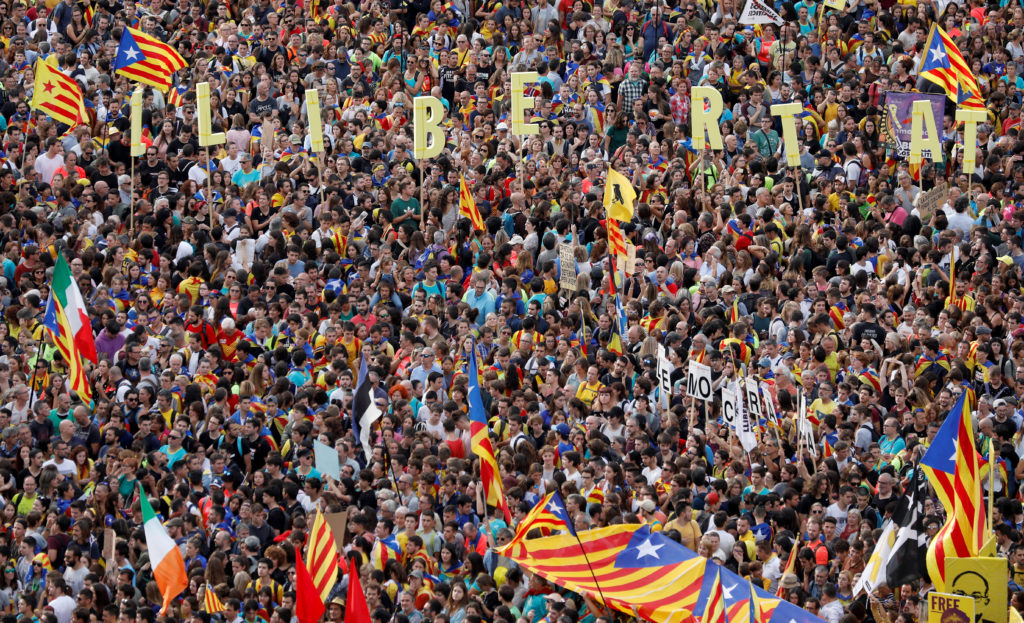 Picketers also closed off to traffic the border with France across the Pyrenees and burned tires or blocked dozens of roads and highways across the northeastern region.

Commuter and long-distance train services were significantly reduced, and many shops and factories didn’t open for business. Catalan authorities said that electricity consumption, a key indicator of industrial activity, was by noon 10.1% lower than at the same time the previous day.

Tourists also felt the turmoil. At least two large cruise operators diverted their ships to other ports, and those which had already docked in the port of Barcelona cancelled the passengers’ excursions to the city. Architect Antoni Gaudí’s modernist Sagrada Familia also closed its doors due to a protest blocking access to the basilica.

Naoya Suzuki, a 34-year-old tourist from Japan, complained about the disruptions to “people who have nothing to do with Spain.”

“I’ve had a look at the news and I can just about understand why they are angry, but not why are they are doing all this and stopping the sightseeing of tourists,” he said.

Highways were occupied by thousands of people joining five marches from inland towns that were expected to converge in Barcelona’s city center on Friday afternoon for a mass protest alongside striking students and workers.

Farmers in tractors joined some of the so-called “Freedom marches,” organized by the grassroots pro-independence ANC and Omnium groups.

That followed clashes with police that broke out in cities across the region late on Thursday, for the fourth night in a row. In the capital, a mob of far-right anti-independence activists also tried to storm a separatist protest that drew thousands of people.

Health authorities in the region said that 42 people were injured Thursday night, most of them in the capital, and the regional police arrested 16 protesters, sending eight to jail, according to Spain’s Interior Ministry.

The interim prime minister, Pedro Sánchez, said authorities will prosecute radicals who rioted this week while ensuring that peaceful protests can continue without incidents.

“The rule is clear,” Sánchez told a press conference in Brussels, where he was attending a European Union summit. “Those who break the law have to answer for their deeds sooner or later.” 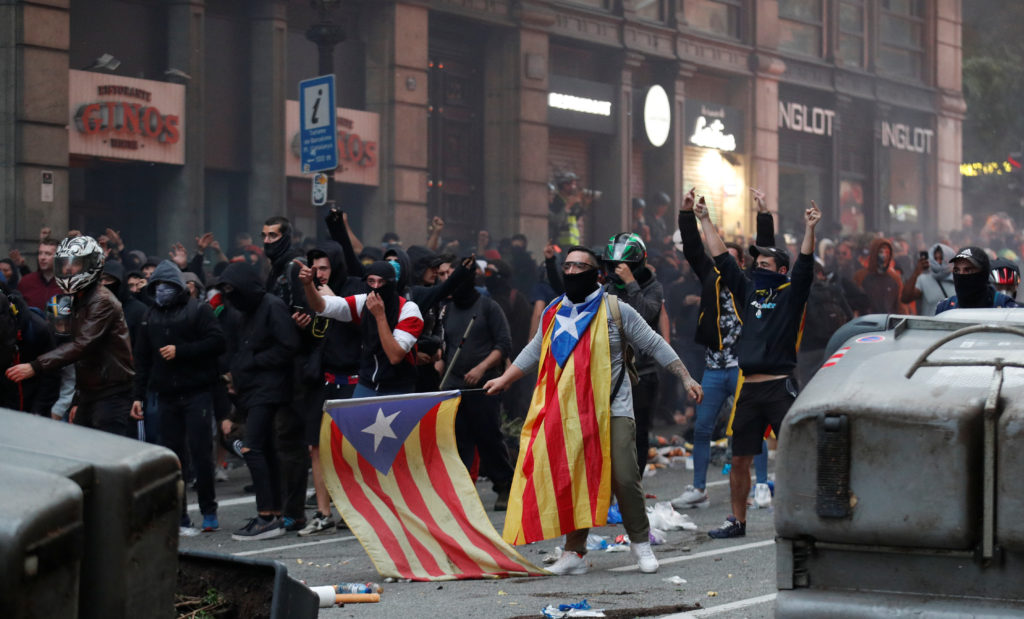 Sánchez faces a general election in less than a month, and the tensions in Catalonia are a test of his political skills.

Albert Ramón, a 43-year-old public servant joining a Friday rally in the northern city of Girona, said the convictions —including fines for three more separatists— had worsened the political climate.

The former head of the Catalan government, Carles Puigdemont, on Friday avoided being jailed after he voluntarily testified before Belgian judicial authorities over a new warrant that Spain issued this week following the sentences.

Spain is seeking Puigdemont on possible charges of sedition and misuse of public funds after previously failing to secure his extradition from Germany and Belgium on suspicion of rebellion.

Puigdemont fled to Brussels in late 2017 following the failed attempt to establish a new European republic in the wealthy region and has since then campaigned for Catalan independence from there.

In May, he was elected as a European lawmaker, but he wasn’t sworn in because Spain’s electoral board said he didn’t qualify for the seat as he had failed to show up in Madrid to swear to uphold Spain’s constitution.

The Belgian judge ordered his release without bail but instructed him to remain in Belgium while awaiting an Oct. 29 extradition hearing, the Belgian prosecutor’s office said in a statement.

Puigdemont told reporters waiting outside of the prosecutor’s office in Brussels that he did not fear justice “from a fair court.”

Instability in the Catalan region has led to the postponement of next week’s marquee soccer game between Barcelona and Real Madrid. The Spanish soccer federation said the game was being moved to avoid coinciding with a large separatist rally, as officials fear more violence. The two clubs have until Monday to decide on an alternative date.

Speaking about the recent wave of rioting, the caretaker Interior Minister Fernando Grande-Marlaska said that authorities are tracking “minority groups that are provoking incidents in very specific places.”

“The images that we are seeing in Barcelona and other Catalan towns don’t match the civilized and peaceful mobilization that we have seen in the past few years,” Miquel Buch said.