CHRISTCHURCH, New Zealand — The leafy New Zealand city where a self-proclaimed racist fatally shot 50 people at mosques during Friday prayers is known for its picturesque meandering river and English heritage. For decades, Christchurch has also been the center of the country’s small but persistent white supremacist movement.

An expert on such fringe groups says it’s probably more than coincidence that the accused mosque shooter, 28-year-old Australian Brenton Tarrant, settled in the region, known for a whiter demographic than the country’s north, after frequently traveling abroad in 2016-2018 in what appears to have been an extreme-right pilgrimage.

He went mostly to areas of Europe with a long history of sectarian dispute, including clashes between Renaissance Europe and the Ottoman Empire and the breakup of Yugoslavia following its ethnic and religious conflicts.

The attack has upended New Zealand’s image as one of the world’s safest and most tolerant countries. It also has highlighted apparent failings by security and intelligence services to view white supremacists as a real threat or to take seriously warnings from Muslim groups of a rise in Islamophobic and xenophobic incidents in recent years.

READ MORE: Donate, organize or show up: How to help after the New Zealand massacre

Tarrant planned his attack on two mosques meticulously and had resolved two years earlier to kill Muslims, according to a manifesto he published moments before the massacre. He actively planned the Christchurch shootings for the past three months, he said in the manifesto posted online and emailed to the office of New Zealand’s prime minister minutes before driving to his first target, the golden-domed Al Noor mosque.

Police say they are certain Tarrant was the only gunman but may have had support and are investigating that possibility. He had five guns, two of which were converted into semi-automatic weapons. It’s likely that at least some were legally purchased online from a Christchurch gun store.

Possible links between the shooter and white supremacists in New Zealand’s south have been alleged by recreational gun user and hunting guide Pete Breidahl.

In a video posted on Facebook on Saturday, he said he complained in late 2017 to an arms officer — a local police officer who monitors people’s gun licenses — about the disturbing behavior of members of a rifle club in the southern city of Dunedin that Tarrant reportedly joined.

In the video and comments posted online, Breidahl said the club members had Confederate flags, wore camouflage clothing with rank insignia, vilified Muslims and had homicidal fantasies. He claimed to have met Tarrant, calling him “not right.” Police said they have no record of a complaint but are looking into Breidahl’s claims further.

Academic Paul Spoonley, who has extensively researched white supremacist groups in New Zealand, said they have been relatively quiet in Christchurch since a 2011 earthquake that forced whole neighborhoods to move and altered the city’s demographics with an influx of migrant workers for reconstruction.

“They’ve been quieter recently but they haven’t gone away. They are still here,” he said, citing a 2016 incident in which pigs’ heads were left at the Al Noor mosque, where 42 people died in Friday’s massacre. 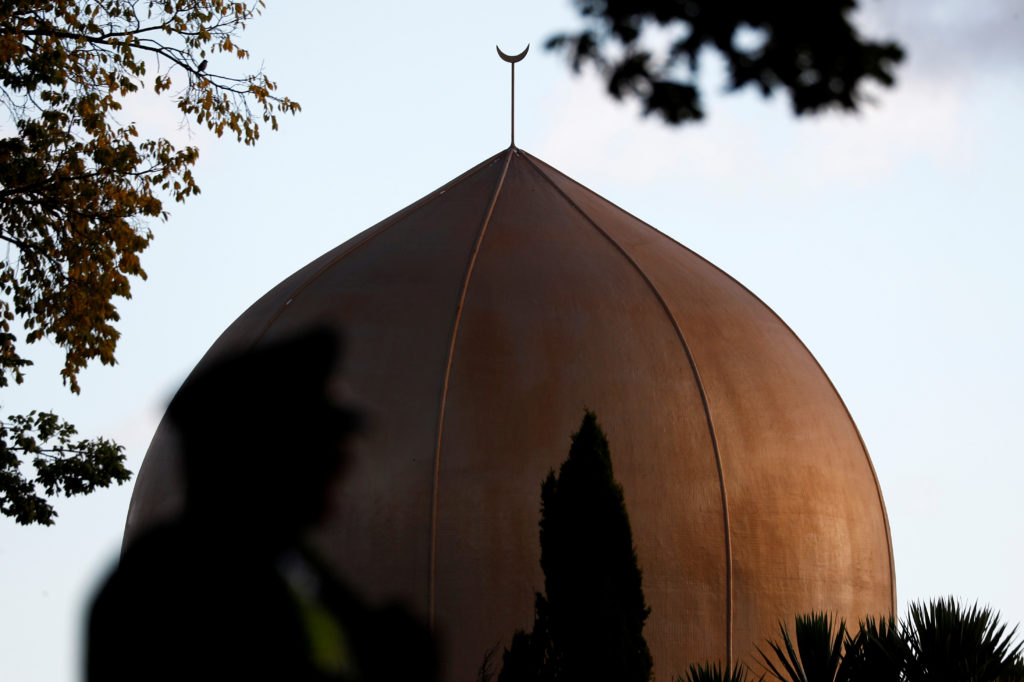 A view of the dome of Al Noor mosque, where the shooting took place, in Christchurch, New Zealand. Photo by Edgar Su/Reuters

A business owner in Christchurch has also attracted media attention since the massacre because his company’s vans were emblazoned with neo-Nazi references including the “black sun” symbol that Tarrant’s guns were covered with. The same images, which are used as the company’s branding, appear on its website.

When AP visited the registered business address, located in one of Christchurch’s poorer neighborhoods, three of its vans were parked opposite, their “black sun” imagery removed but still identifiable by a company website address on them. A visibly hostile man standing beside the vans, who did not appear to be the business owner, did not want to answer questions.

Police on Tuesday said they had arrested a 44-year-old man in Christchurch for distributing objectionable material and he would appear in court the next day.

According to Spoonley, the level of hate crimes in New Zealand is low compared with other countries as is the number of white supremacists, but it’s “always a challenge to get people to accept that they exist.”

“There’s a reluctance to see equivalence between the risks presented by right-wing extremist groups and radical Islamic and leftist groups,” he said.

Neighboring Australia’s white supremacist scene is more virulent, in part reflecting the history of its “White Australia” immigration policy which existed in various forms from soon after Federation in 1901 to as late as 1973. In modern times, the rise of a succession of prominent right-wing politicians — starting with Pauline Hanson and her One Nation Party in the mid-1990s — also legitimized such views.

Spoonley estimates there are 200-250 hardcore white supremacists in New Zealand and about 300-400 people on the edges.

“I would be very surprised if Tarrant didn’t make some sort of contact,” he said.

The groups, which emerged in the late 1960s, have evolved over time, coalescing for years around fear of New Zealand moving too far from its British roots, anti-Semitism and opposition to Maori sovereignty and Asian immigrants, and then shifting to Islamophobia following the Sept. 11, 2001, attacks in the U.S.

Spoonley, who researched extreme-right groups in the U.K. in the 1970s, said when he returned to New Zealand in the 1980s he was told by authorities there were no similar organizations.

But he quickly found more than 70 extreme-right groups, many of them in Christchurch. He attributes three murders in New Zealand since 1989 to white supremacists, including two that were ideologically motivated — a South Korean tourist in 2003 and a homeless gay man in 1999.

As Tarrant plotted more recently, Muslim groups in New Zealand were growing increasingly concerned by a rise in abuse against the community but say they were ignored.

“There has been an increasing trend which has been brought to the attention of the authorities several times in the last three to four years, including police,” said Anwar Ghani, a spokesman for a federation of Islamic organizations. “It was treated not so seriously.”

Verbal abuse, hate emails, hate phone calls and assaults that seem to have an Islamophobic and racist motivation, or a combination of the two, are among the hate crimes experienced by Muslims in New Zealand, he said.

The country does not have an official hate crimes database, making it difficult to measure the trend, but some incidents have been widely reported, causing outrage but sparking no real official measures.

Ghani said there are dotted lines between Friday’s massacre, hostility to Muslims among a segment of the New Zealand population and the global rise of extreme right-wing movements.

“If the issue is not addressed in a proper manner then the problem will continue to increase,” he said. “They are getting bolder and bolder.”

“My interpretation is that in the past 20 years and since 9/11 a political decision was made to prioritize detection and prevention of homegrown jihadists,” he said.

“They decided to go whole hog, 80-85 percent of resources into detecting jihadists,” he said. “The rest was devoted to Marxists, environmentalists, animal rights activists. They went for the left.”

One such jihadi from New Zealand, along with an Australian, was killed by a U.S. drone strike in Yemen in November 2013 while fighting for al-Qaida.

There was no political advantage in targeting alienated young white men seen by the wider population as mostly harmless “Pakeha losers,” a Maori word for white New Zealanders, Buchanan said.

Prime Minister Jacinda Ardern has said the government will convene an inquiry into the intelligence and security services, seeking to understand why Tarrant was able to escape detection.

Tarrant, according to Buchanan, may have been part of a small cell.

“There could be tacit enablers,” he said.

“He was planning for two years,” Buchanan said. “To be able to do that in utter secrecy suggests someone had to have an inkling that the guy was going to do something and said nothing about it.”

Left: Flowers and cards are seen at the memorial site for the victims of Friday's shooting, outside Al Noor mosque in Christchurch, New Zealand. Photo by Edgar Su/Reuters