BRUSSELS — European Union leaders remained fundamentally divided for a third day Sunday over an unprecedented 1.85 trillion-euro ($2.1 trillion) EU budget and coronavirus recovery fund, and German Chancellor Angela Merkel warned that they might not reach a deal despite the urgency imposed by the pandemic.

Luxembourg Prime Minister Xavier Bettel said in his seven years’ experience of European meetings, “I have never seen positions as diametrically opposed as this.”

Even with Merkel and French President Emmanuel Macron negotiating as the closest of partners, the traditionally all-powerful Franco-German alliance could not get the bloc’s 27 quarreling nations in line.

Often negotiating outdoors on a sundeck in the Europa summit center in Brussels, the blue skies and fresh breeze had no impact on the mood. Undiplomatic terms like “hate” and “grumpy” have been thrown around between leaders during marathon negotiations that should have drawn everyone closer together to fight a historic recession in the bloc.

“Whether there will be a solution, I still can’t say,” Merkel said as she arrived early for the extra day of talks.

The differences were so great that Sunday’s resumption of talks by all 27 leaders together was pushed back several hours to near evening as small groups worked on new compromise proposals.

The pandemic has sent the EU into a tailspin, killing around 135,000 of its citizens and sending its economy into an estimated contraction of 8.3% this year.

The bloc’s executive has proposed a 750 billion-euro coronavirus fund, partly based on common borrowing, to be sent as loans and grants to the countries hit hardest by the pandemic. That comes on top of the seven-year 1 trillion-euro EU budget that leaders have been haggling over for months even before the pandemic hit.

All nations agree they need to band together but richer countries in the north, led by the Netherlands, want strict controls on spending, while struggling southern nations like Spain and Italy say those conditions should be kept to a minimum.

Merkel and Macron walked out of heated talks before dawn Sunday with five nations nicknamed “the frugals,” bemoaning their lack of commitment to a common cause.

“They ran off in a bad mood,” Dutch Prime Minister Mark Rutte said after Merkel and Macron’s departure, calling the mood “grumpy.”

The so-called frugal nations held talks with EU summit host Charles Michel early Sunday but the chances of quick progress appeared remote. Merkel and Macron refused to water down their proposals of aid while Rutte and others also stuck to their demands. 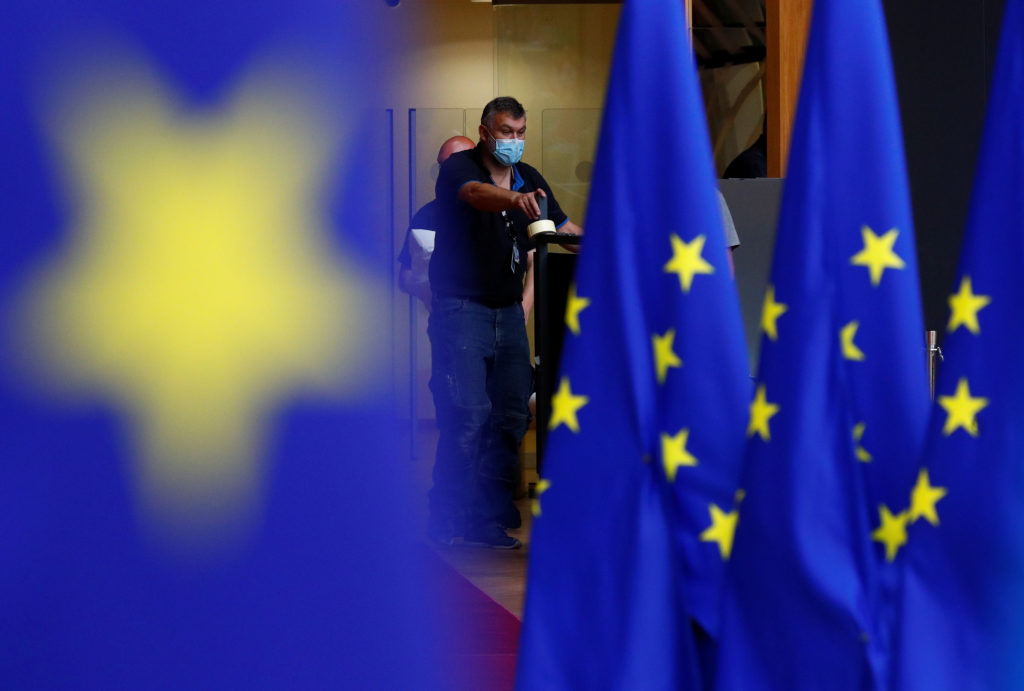 A worker is seen near European Union flags ahead of the EU leaders summit amid the coronavirus disease (COVID-19) outbreak in Brussels, Belgium, July 16, 2020. Photo by Francois Lenoir/Reuters.

Hungarian Prime Minister Viktor Orban raised the specter of a second wave of COVID-19 that could hit EU economies hard.

“It is a decisive moment,” said an EU official, who asked not to be identified because the negotiations were ongoing. “We are negotiating under the pressure that a deal is a must.”

Rutte has long been known as a European bridge builder, but this weekend his tough negotiating stance is being blamed for holding up a deal. He and his allies are pushing for labor market and pension reforms to be linked to EU handouts and a “brake” enabling EU nations to monitor and, if necessary, halt projects that are funded by the recovery fund.

While Italian Prime Minister Giuseppe Conte says he has a good personal relationship with Rutte, he said the “clash is very hard” and that Rutte’s demand for a veto ”is an unwarranted request.”

“He can’t ask us to do specific reforms,” Conte said. “Once (the aid) is approved, each country will present its proposals.”

Another member of the frugals, Austrian Chancellor Sebastian Kurz, said he still believed a deal was possible, but there is a “long way to go,” the Austria Press Agency cited Kurz as saying.

Rutte also wants a link to be made between the handout of EU funds and the rule of law — a connection clearly aimed at Poland and Hungary, countries with right-wing populist governments that many in the EU think are sliding away from democratic rule.

“I don’t know what is the personal reason for the Dutch prime minister to hate me or Hungary, but he’s attacking so harshly and making very clear that because Hungary, in his opinion, does not respect the rule of law, (it) must be punished financially,” Orban said.

Orban added he was prepared to stick around for a week if necessary to reach a deal.

“Not even soccer is as important as reaching an agreement. It’s not about Hungary but about Europe now,” said the notoriously soccer-mad prime minister.

Macron said leaders need to compromise but still respect the underlying principles of the EU.

“It is still possible, but these compromises, I say very clearly, will not be made at the cost of European ambition,” he said.