The reporters, Wa Lone, 32, and Kyaw Soe Oo, 28, were each sentenced to 7 years in prison for violating the country’s Official Secrets Act, verdicts that received immediate condemnation from the international community. 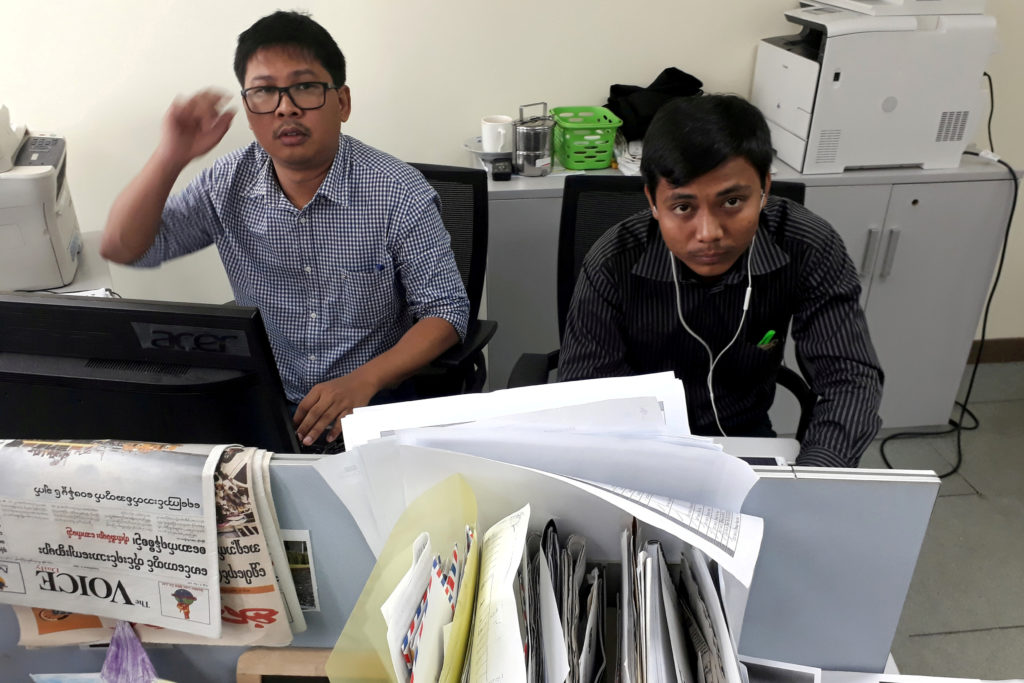 Reuters journalists Wa Lone (L) and Kyaw Soe Oo, who are based in Myanmar, pose for a picture at the Reuters office in Yangon, Myanmar December 11, 2017. Photo By Antoni Slodkowski/Reuters

The duo had been investigating the the deaths of Rohingya Muslims at the hands of Myanmar’s military when they were arrested in December. They were sentenced on Sept. 3 after they pleaded not guilty.

Wa Lone told the Myanmar court during a trial in July that a police officer had handed the unsolicited government documents to Kyaw Soe Oo and him just minutes before their arrests. He also said the officer had lied about the exchange during pre-court hearings.

More than 700,0000 Rohingya fled Myanmar last year after attacks on the their population by some members of the country’s military and Buddhist majority. The United Nations High Commissioner described those acts as a “textbook example of ethnic cleansing.”

On Sunday, some of the demonstrators, who Reuters reported were made up of youth activists and press freedom advocates, held banners in Burmese and English that called for the public’s right to information and a free press. Others chained themselves together and held signs or chanted demands for the journalists’ release.

Their demonstration drew messages of support from human rights and journalism organizations, and others around the world, some of whom took to Twitter to express their outrage.

“Journalism is not a crime,” Tirana Hassan, Amnesty International’s crisis response director, posted on Twitter. “Authorities must release them, ensure press freedom and respect the right to peaceful assembly for activists who are gathering to protest today.”

We stand with local and international activists in calling on the government of Myanmar to release journalists Wa Lone and Kyaw Soe Oo, who face 7 years in prison for reporting on the truth. #FreeWaLoneKyawSoeOo https://t.co/v75Jp5pXYA

The conviction of Reuters reporters Wa Lone and Kyaw Soe Oo represents a travesty of justice. I stand with @PENamerican and Myanmar activists in calling for their immediate release. #FreeWaLoneKyawSoeOo