JOHANNESBURG — Several African countries have announced sweeping restrictions to try to contain the steady spread of the coronavirus, which has reached at least 25 of Africa’s 54 countries.

South Africa, Kenya, Senegal and Mauritania are among the countries that have imposed travel restrictions and closed schools.

“This is a grave emergency and given the scale and speed of its spread, no country is immune,” said Ramaphosa, addressing the nation Sunday night. He said the country has 61 cases, including local transmission of COVID-19, and he expected the number to increase dramatically

“We must take urgent and drastic measures to reduce the impact on the health of South Africans and our economy,” said Ramaphosa, announcing a ban on the arrival of travelers from countries with the disease including China, Iran, South Korea, Italy, Spain, the United States and Britain.

Ramaphosa said all schools will be closed for 30 days from Wednesday and he banned all public gatherings of more than 100 people. South Africa will close 35 of its 53 land borders and will intensify screening at its international airports.

The decline in international trade and tourism has already negatively affected South Africa’s economy, which he said is about to experience demands in expenditure for increased health measures. 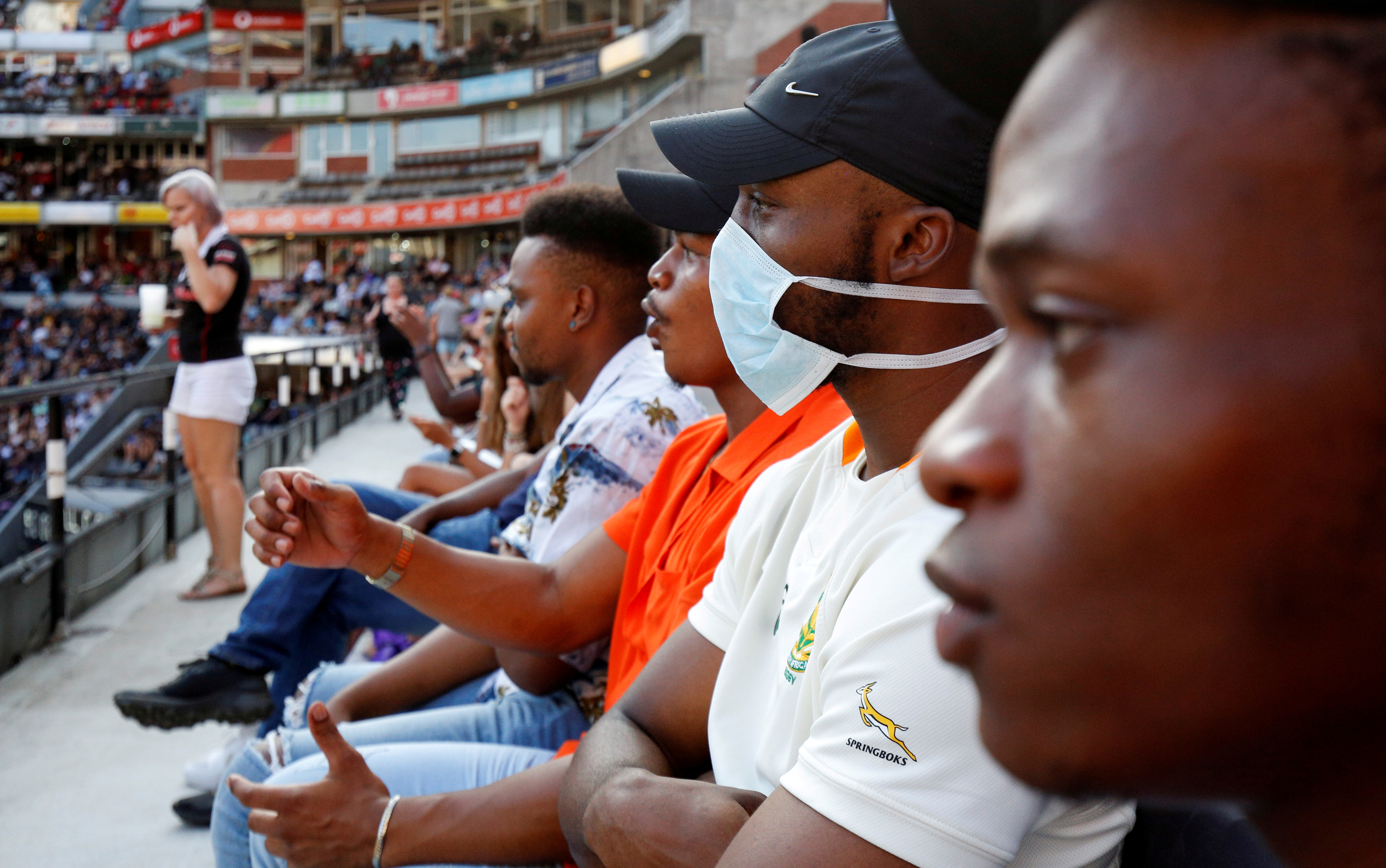 FILE PHOTO: A fan wears a face mask during a Super Rugby match between the Sharks and the Stormers as it was announced that Super Rugby will be put on hold after this weekend’s matches over the coronavirus outbreak in Durban, South Africa, March 14, 2020. Photo by Rogan Ward/Reuters.

Kenya’s President Uhuru Kenyatta announced restrictions preventing travelers coming from countries that have cases of coronavirus, saying only Kenyan citizens and those with residence permits would be permitted to enter, but would have to self-quarantine for two weeks. He also said all schools in Kenya would close for three weeks.

Senegal and Mauritania have also announced the immediate closure of schools for three weeks. Senegal is also banning all public gatherings for a month and banned the entry of all cruise ships, and suspended Muslim and Christian pilgrimages.

Morroco has suspended flight connections and closed borders with all European countries and many other countries in Africa and the Middle East.

The worldwide outbreak has sickened more than 156,000 people and left more than 5,800 dead, with thousands of new cases confirmed each day. For most people, the new coronavirus causes only mild or moderate symptoms, such as fever and cough. For some, especially older adults and people with existing health problems, it can cause more severe illness, including pneumonia. The vast majority of people recover.

AP journalists Carley Petesch in Dakar, Senegal and Andrew Meldrum in Johannesburg contributed to this story.

Left: Workers wear protective face masks at the entrance of the Sarova Stanley hotel a day after the first coronavirus case was reported in Nairobi, Kenya March 14, 2020. Photo by Njeri Mwangi/Reuters.