Up to 200K deaths foreseen in U.S. as Spain, Italy demand help

The coronavirus outbreak could kill 100,000 to 200,000 Americans, the U.S. government’s top infectious-disease expert warned on Sunday, as authorities urged people in and around the nation’s deadliest hot spot, New York City, to limit their travel to contain the scourge.

Dr. Anthony Fauci, director of the National Institute of Allergy and Infectious Diseases, made the dire prediction on CNN’s “State of the Union,” adding that millions in the U.S. could become infected.

As of Sunday morning, the U.S. had about 125,000 infections and 2,200 deaths, according to the running tally kept by Johns Hopkins University, though the true number of cases is thought to be higher, because of testing shortages and mild cases that may have gone unrecognized or unreported.

Around the world, doctors were forced to make tough choices about which patients to save with their limited breathing machines, and Spain and Italy demanded more European help as they fight still-surging coronavirus infections in the continent’s worst crisis since World War II.

The confirmed global death toll surpassed 32,000 and new virus epicenters emerged in U.S. cities like Detroit, New Orleans and Chicago. Even rural America has not been immune, as virus hotspots erupt in Midwestern towns and Rocky Mountain ski havens. 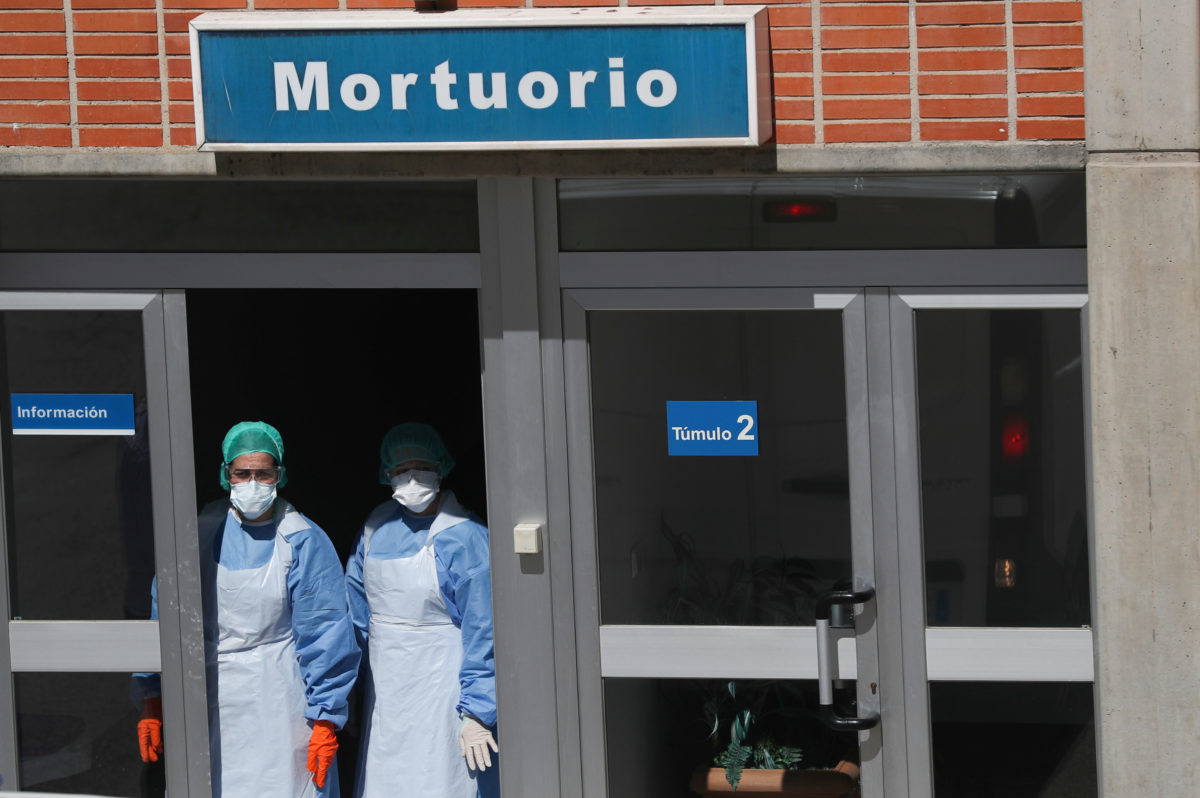 Spain and Italy alone account for more than half of the world’s death toll, and are still seeing over 800 deaths a day each.

Experts say, however, that virus toll numbers across the world are being seriously under-represented because of limited testing and political decisions about which bodies to count. Unlike the U.S., France and Italy do not count deaths that take place at home or in nursing homes, even though nursing homes are known coronavirus incubators around the world.

‘’Europe must demonstrate that it is able to respond to this historic call,’’ Italian Premier Giuseppe Conte said late Saturday. “I will fight until the last drop of sweat, until the last gram of energy, to obtain a strong, vigorous, cohesive European response.”

President Donald Trump backtracked on a threat to quarantine New York and neighboring states amid criticism and questions about the legality of such a move. But the Centers for Disease Control and Prevention issued a travel advisory urging all residents of New York City and others in New York state, New Jersey and Connecticut to avoid all nonessential travel for 14 days.

Shocking as that is for Americans, that stopped short of the restrictions imposed in Europe or elsewhere. Parisians are fined if they try to leave the city, South Africans can’t even buy liquor, and Serbians are upset over a ban on walking their dog. In Italy, burials are being held with only one family member.

Spain moved to tighten its lockdown and ban all nonessential work Sunday as it hit another daily record of 838 dead. The country’s overall official toll was more than 6,500.

Spain’s health emergencies chief, Fernando Simón, said the country’s infection rate fell Sunday to 9%, down from 18% three days before. But he said the number of people in intensive care units keeps rising and hospitals are at their limits in several regions.

“That is why we have to strictly apply the control measures,” he said.

“It is the most difficult moment for the EU since its foundation and it has to be ready to rise to the challenge,” he said. 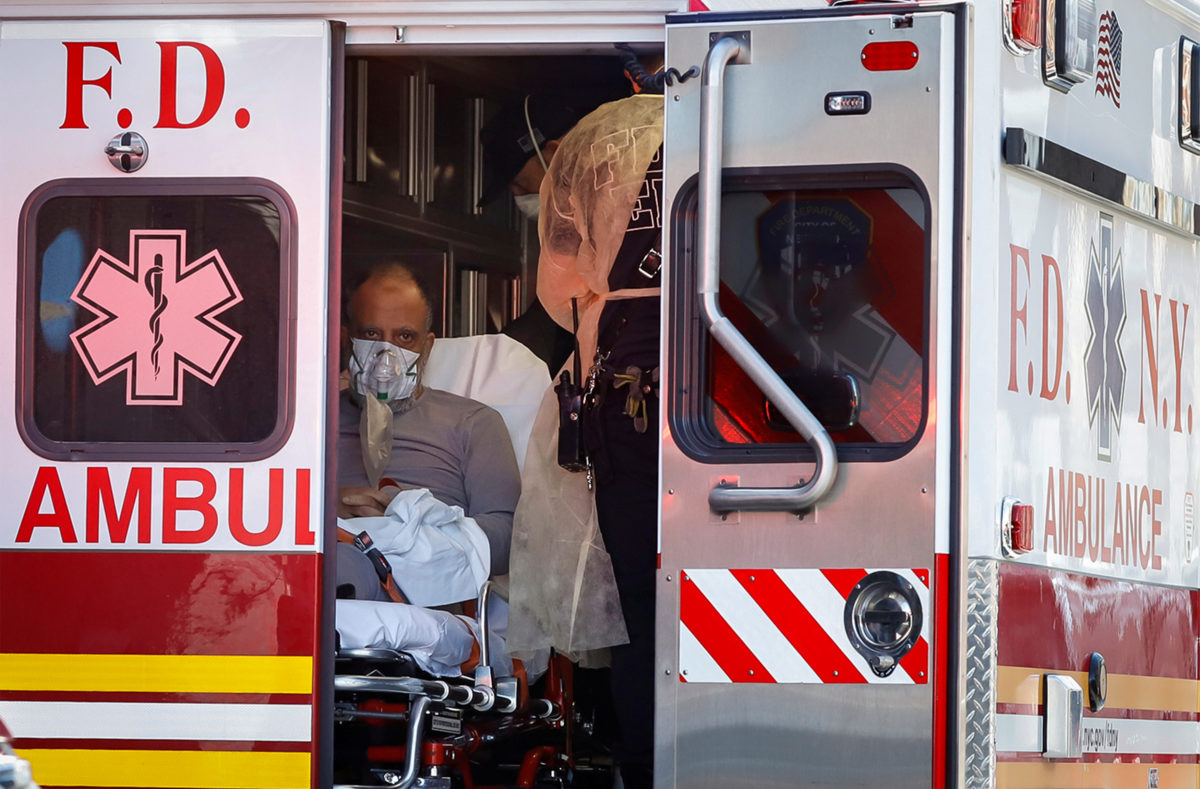 Spain, Italy, France and six other EU members have asked the union to share the burden by issuing European debt, dubbed coronabonds, to help fight the virus. But the idea has met resistance from Germany and the Netherlands.

European countries have also resisted sharing masks with their neighbors for fear that they, too, will need them in mass quantities soon. Many countries have turned to China, where the outbreak is easing, flying in cargo planes to get protective medical equipment.

These tensions have raised new fears about whether the EU will survive this crisis.

Worldwide infections surpassed 680,000, according to Johns Hopkins. The United States leads the world in reported cases, but five other countries have higher death tolls: Italy, Spain, China, Iran and France. Italy has more than 10,000 deaths, the most of any country.

Egypt shut its beaches as cases in the Mideast surpassed 50,000. Police in the Philippines stepped up arrests of quarantine violators, and more tourists were evacuated from Mount Everest and the Indonesian island of Bali.

Poland is considering delaying its May 10 presidential election, and Russia ordered borders to close on Monday. A prominent French politician with the virus died, France’s first death of a senior official.

British Prime Minister Boris Johnson, who has the virus himself, warned: “Things will get worse before they get better.”

For most people, the coronavirus causes mild or moderate symptoms, such as fever and cough that clear up in two to three weeks. But for others, especially older adults and people with existing health problems, the virus can cause more severe illness, including pneumonia, and lead to death.

More than 145,000 people have recovered, according to Johns Hopkins.

Pope Francis called Sunday for a cease-fire in all conflicts around the globe ‘’to focus together on the true fight of our lives.’’ He also urged authorities to take special care of those in nursing homes, military barracks and jails.

In Detroit, which has a large low-income population, the death toll rose to 31 with about 1,400 infections in a rate that shocked health officials.

“This is off the charts,” said Dr. Teena Chopra, medical director of infection prevention and hospital epidemiology at the Detroit Medical Center. “We are seeing a lot of patients that are presenting to us with severe disease, rather than minor disease.”

Some U.S. states began to try to limit exposure from visitors from harder-hit areas. Rhode Island National Guard troops were going door to door in coastal communities to find New Yorkers. Florida is setting up checkpoints to screen visitors from Louisiana.

As others tightened controls, China eased more restrictions ,following the ruling Communist Party’s declaration of victory over the coronavirus. Airline flights from Hubei province at the center of the coronavirus outbreak resumed Sunday. Subway and bus service resumed Saturday in the province’s hard-hit capital of Wuhan.

Angela Charlton in Paris, Joe McDonald in Beijing, Geir Moulson in Berlin, Vanessa Gera in Warsaw and other Associated Press journalists around the world contributed to this report.