The price of oil fell below $0. What happens next?

The price of oil just did something it’s never done before — fall below $0. That’s right, the stuff that makes the world go round, the lifeblood of the global economy, was worthless. Actually, worse than that — if you were selling oil on Monday in the United States and you wanted someone to take it off your hands right away, you would have had to pay the buyer $40 a barrel. It’s unprecedented and more stunning evidence of how this pandemic is rocking the global economy.

The drop is also the result of a highly technical feature of the American oil futures market, where oil is bought and sold in contracts for delivery at future dates. If you are “buying” oil today for delivery in May, you are demanding the seller pay you because you’re going to have to pay someone else to store it. With demand down and storage essentially full, space is tight. “You better own a truck, if you can even find a truck – because all the pipelines are full,” said Jason Schenker of Prestige Economics. “There’s nowhere for the oil to go.”

The dramatic price drop is “a primal scream about the collapse in demand.”

Buyers and sellers of oil outside of the U.S. have more options. Even when there’s no room in storage facilities on land, you can always put the oil on a ship — at least until those also fill up — and let it float around at sea unil prices improve. There are at least 150 million barrels of oil now at sea in various locations around the world — enough to fill more than 9,000 Olympic-sized swimming pools. Other futures markets also allow buyers to “virtually” transact, or buy the oil without actually receiving it. Similar to buying gold, no one actually gives you the bar of gold– and that means buyers don’t have to pay someone as much to store it. For those two reasons, oil prices stayed in the black in other parts of the world, even as they went negative in the U.S. Still, Brent crude, the global benchmark, was selling for under $20 a barrel, the lowest price since 2002.

Even before the pandemic hit, the price of oil was falling. Saudi Arabia and Russia, two of the world’s largest oil producers, opened their taps in March, abandoning a pact whereby they both held back some of their production. Their goal was to grab market share from one another, as well as from oil producers in the U.S., the world’s largest energy producer. Last week, under pressure from President Donald Trump, Saudi Arabia and Russia joined a host of oil-producing countries in again promising to cut production.

But it was too little, too late. Demand for oil has plummeted since the coronavirus pandemic has interrupted the daily flow of the global economy. Factories around the world are closed and people have stopped driving and flying. The cuts in supply being made now are not deep enough to keep up with cratering demand.

The dramatic price drop is “a primal scream about the collapse in demand,” said Dan Yergin, vice chairman of IHS Markit. 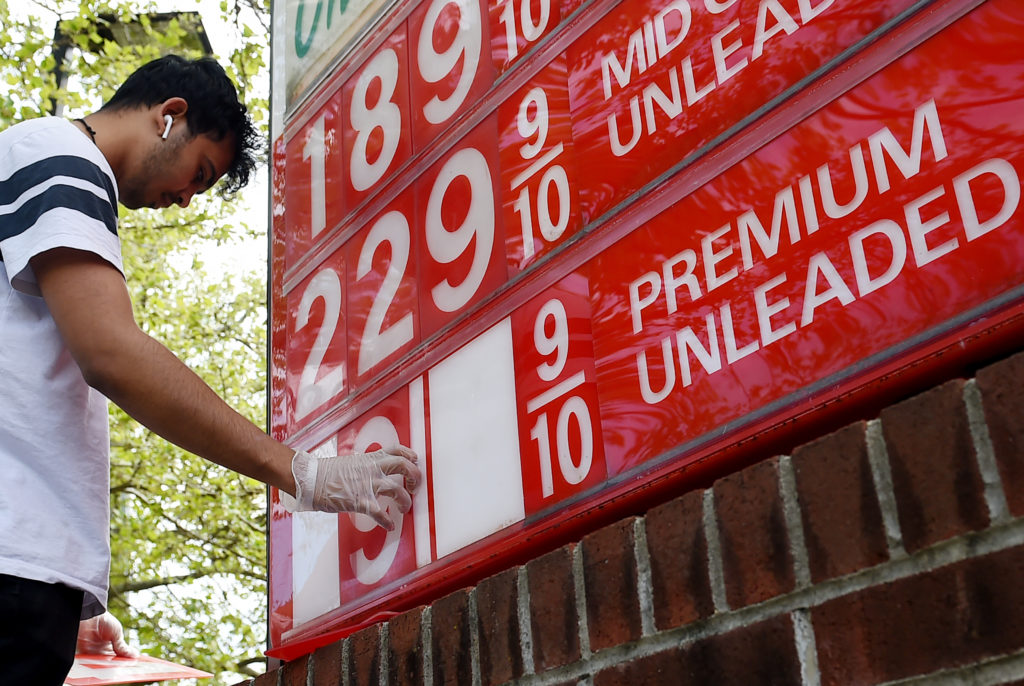 An employee of a gas station adjusts gasoline pump prices as they continue to fall with the oil market in turmoil on April 21, 2020, in Arlington, Virginia. Photo by OLIVIER DOULIERY/AFP via Getty Images

What happens next, Yergin added, depends on “what happens in May with the promised cutbacks in production,” what the fall in oil prices does to production itself, and how quickly the global economy reopens. But American oil producers are taking rigs off line, and the industry already shed 50,000 jobs last month, according to the research consultancy BW Research Partnership.

And it could get a lot worse. Warnings about a rise in bankruptcies have been coming in from energy experts for months. In a recent report, Rystad Energy said more than 500 U.S. oil companies could go bankrupt if oil stays in the region of $20 for the rest of the year, adding, “At $10, almost every U.S. E&P company that has debt will have to file Chapter 11 or consider strategic opportunities.”

On Tuesday, Trump tweeted, “We will never let the great U.S. Oil & Gas Industry down. I have instructed the Secretary of Energy and Secretary of the Treasury to formulate a plan which will make funds available so that these very important companies and jobs will be secured long into the future!” The day before, Trump said he would consider a proposal from Republican Sen. Kevin Cramer, R-N.D., to ban oil imports from Saudia Arabia and the U.S.’ strategic reserve will take some of the spare oil, but few expect that, even if the president does intervene, it would fundamentally change the supply-demand picture in the long term. The International Monetary Fund predicts the global economy will decline by 3 percent this year. A global recession doesn’t bode well for demand.

Normally, consumers stand to benefit from lower oil prices. Lower energy prices, in theory, should stimulate growth around the world, including in the U.S.But the consequences of these record-low oil prices will also be dire. Iraq, Iran, Nigeria and Venezuela, who rely on their oil wealth, are all at economic risk. According to the IMF, Saudia Arabia needs to sell its oil for $80 a barrel in order to balance the Kingdom’s budget. Russia relies on energy exports to fill 40 percent of the Kremlin’s coffers. And yet, for now, both countries have substantial reserves to withstand a price shock.

Russian President Vladimir Putin’s spokesman Dmitry Peskov told reporters Tuesday that the oil price’s decline was a technical problem and not apocalyptic. Trump shared that hope on Monday, saying the price decline was the result of a “short-term squeeze.” It’s hard to know if they’re right — the long-term effects of oil’s first-ever descent below zero have yet to play out.