BAGHDAD (AP) — U.S. troops fired tear gas on Wednesday as hundreds of Iran-backed militiamen and other protesters gathered outside the American Embassy in Baghdad for a second day and set fire to the roof of a reception area inside the compound.

Dozens of Iran-allied militiamen and their supporters had camped out at the gates of the embassy overnight, a day after they broke into the compound, trashing a reception area, smashing windows and spraying graffiti before pulling back.

The U.S. Marines guarding the embassy fired tear gas Wednesday as more crowds arrived and after the protesters lit a fire on the roof of the reception area. Smoke rose from the building. There have been no reports of any injuries since the protests began.

Later, Iraqi soldiers, federal police and elite counterterrorism forces deployed along the fence between the protesters and the compound. There was no friction between the security forces and the demonstrators.

The Popular Mobilization Forces, an umbrella group of state-allied militias, issued a statement calling on its supporters to withdraw from the compound in response to an appeal by the Iraqi government, saying “your message has been received.”

WATCH: How Iran could benefit from Iraqi outrage over U.S. airstrikes

Some of the protesters could be seen taking down their tents later Friday, while others vowed to stay. A spokesman for the Kataeb Hezbollah militia, Mohammed Mohieh, told The Associated Press that the sit-in “will continue.”

He said they were under pressure from “the presidency and some Iraqi politicians” who want to “please the Americans.” But he said the group’s supporters would remain until the U.S. ambassador is evicted, the embassy is closed and all American troops leave Iraq. 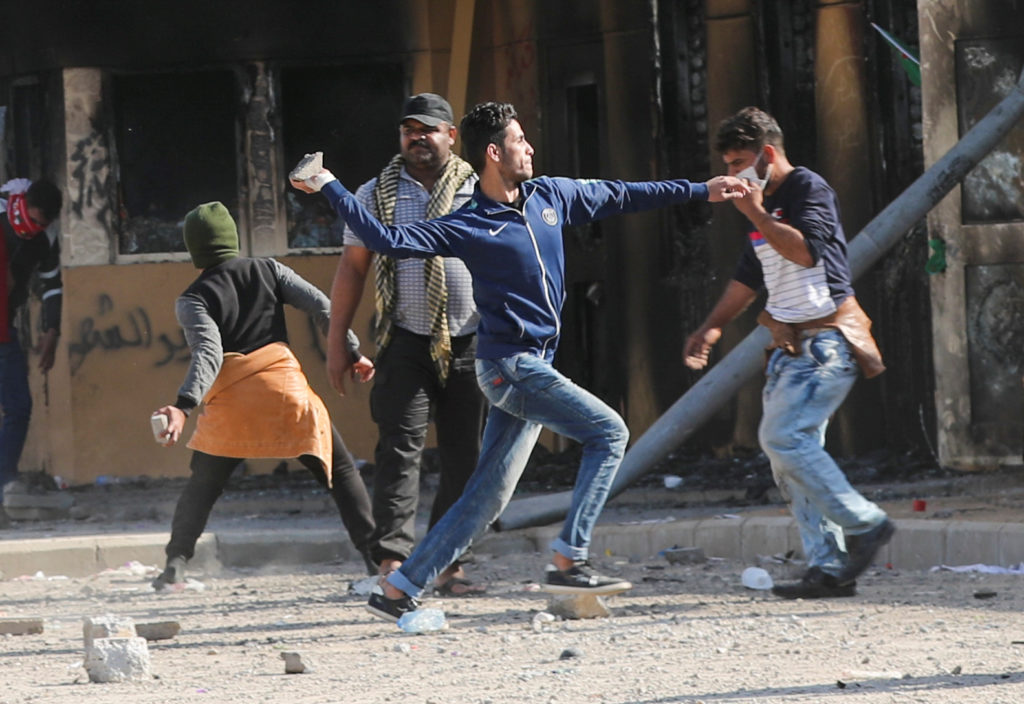 Protesters and militia fighters throw stones towards the U.S. Embassy during a protest to condemn air strikes on bases belonging to Hashd al-Shaabi (paramilitary forces), outside the embassy in Baghdad, Iraq January 1, 2020. Photo by Thaier al-Sudani/Reuters

The militiamen were protesting deadly U.S. airstrikes that targeted Kataeb Hezbollah on Sunday, killing 25 fighters. Those strikes were in response to a rocket attack on an Iraqi army base that killed a U.S. contractor last week. The militia is separate from the Hezbollah militant group in Lebanon, though both are backed by Iran.

The embassy, on the banks of the Tigris River in the government district known as the Green Zone, is the largest U.S. diplomatic mission in the world and one of the most heavily fortified. It has been targeted by rocket and mortar attacks in the past but casualties have been rare.

The violence comes as Iran and its allies across the region have faced unprecedented mass protests in recent months and after heavy U.S. sanctions on Iran that have cratered its economy.

Iraq has seen massive anti-government protests since October fueled by anger at widespread corruption and economic mismanagement, as well as Iran’s heavy influence over the country’s affairs. Those protesters were not involved in the embassy attack.

President Donald Trump blamed Iran for the attack on the embassy and Defense Secretary Mark Esper later announced the immediate deployment of an infantry battalion of about 750 soldiers from the Army’s 82nd Airborne Division to the Middle East. He did not specify their destination, but a U.S. official familiar with the decision said they will go to Kuwait.

Iran has denied any involvement in the attack on the embassy. Foreign Ministry spokesman Abbas Mousavi was quoted by state media on Tuesday as warning the U.S. against any “miscalculation” in the worsening standoff. 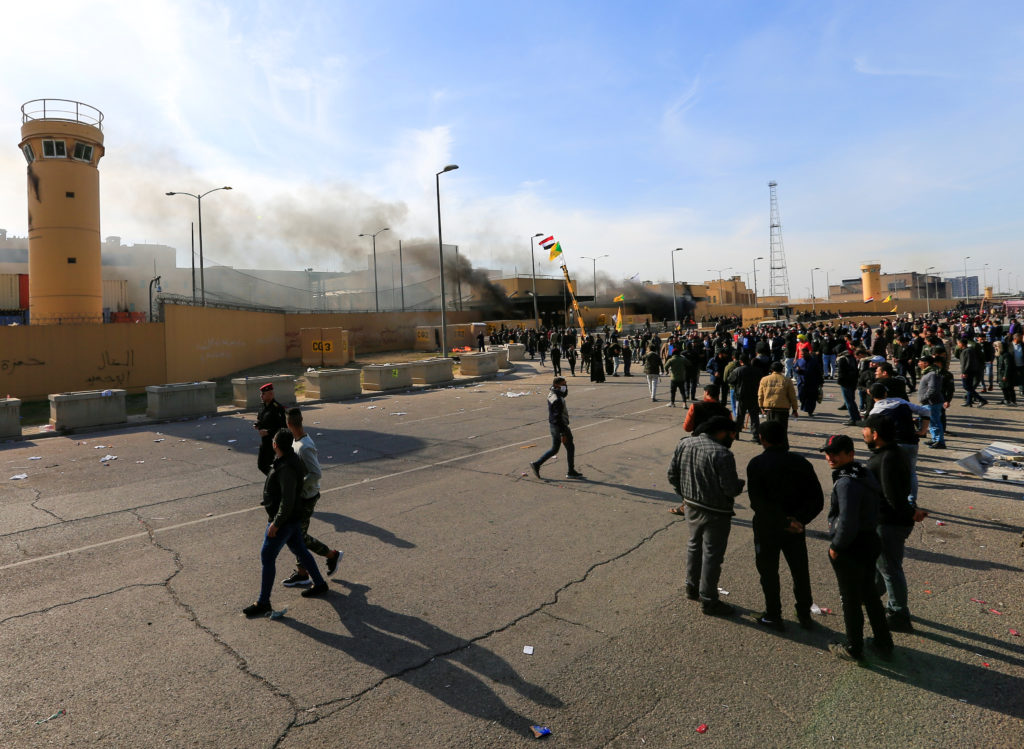 In an apparent reference to Trump’s allegations of Iranian involvement, Iran’s supreme leader, Ayatollah Ali Khamenei, was quoted by semi-official media as saying that “if the Islamic Republic makes a decision to confront any country, it will do it directly.”

Iran later summoned the Swiss charge d’affaires, who represents American interests in Tehran, to protest what it said was war-mongering by U.S. officials, the state-run IRNA news agency reported.

The U.S. and Iran have vied for influence over Iraq since the 2003 U.S.-led invasion that toppled Saddam Hussein. Iran has close ties to Iraq’s Shiite majority and many of its major political factions, and its influence has steadily grown since then.

Iran helped to mobilize tens of thousands of mostly Shiite militiamen to battle the Islamic State group when it stormed across northern and western Iraq in 2014 as the armed forces collapsed. In the subsequent campaign against the extremists, the U.S. and Iran both provided vital aid to Iraqi forces, who eventually declared victory in December 2017.

The political influence of the Popular Mobilization Forces has risen in recent years, and their allies dominate the parliament and the government. That has made them the target of the anti-government protests.

The anti-government protesters have attacked Iranian diplomatic missions and the local headquarters of parties affiliated with the militias across southern Iraq. They have also set up a major protest camp in central Baghdad.

For weeks, the anti-government protesters have been trying to enter the Green Zone housing the government and the U.S. Embassy, but have been beaten back by security forces, who have killed hundreds of demonstrators.

The militiamen and their supporters, however, were able to quickly enter the Green Zone and mass in front of the embassy, with little if any resistance from authorities. 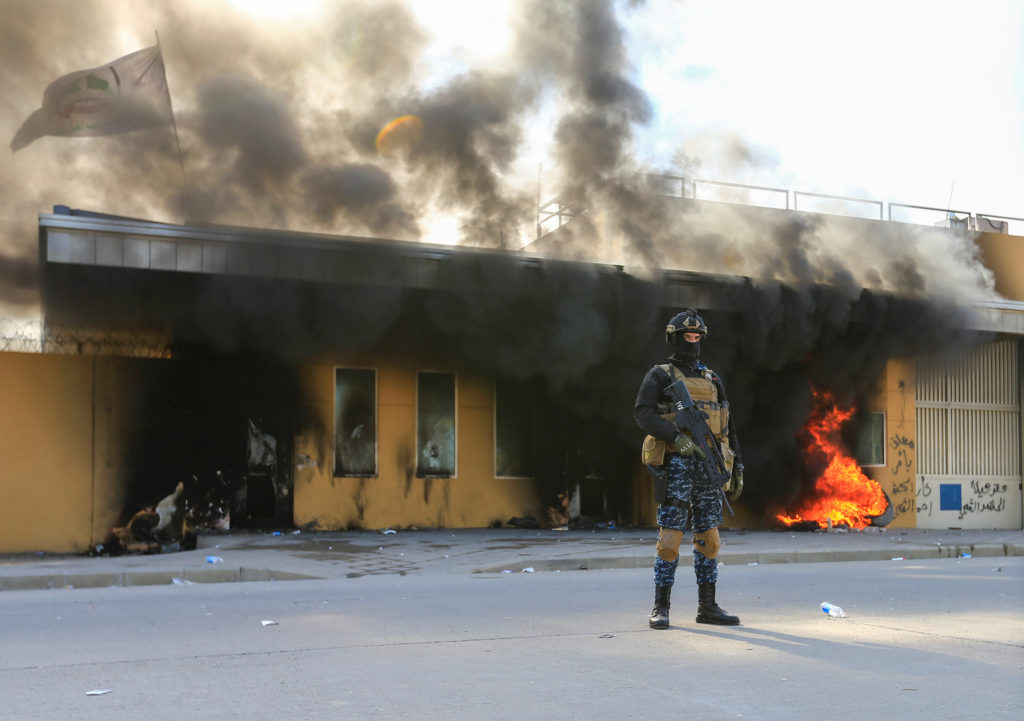 A member of Iraqi security forces stands near burning tyres at the reception room of the U.S. Embassy, during a protest to condemn air strikes on bases belonging to Hashd al-Shaabi (paramilitary forces), in Baghdad, Iraq January 1, 2020. Photo by Thaier al-Sudani/Reuters

By Wednesday morning, they had set up a small sit-in of their own, with around 50 tents set up between two main gates about 500 meters (yards) apart. Demonstrators set up a makeshift clinic and cooks with aprons reading “Popular Mobilization Forces logistical support” served meals out of giant pots. Mobile toilets were also set up in the area.

Demonstrators could be seen hurling rocks over the walls of the embassy compound, where U.S. troops responded by firing tear gas from the roofs of buildings. At one point, two armed security guards mounted a structure inside the embassy near the gate and the demonstrators began throwing stones toward them, forcing them to withdraw.

Left: Protesters and militia fighters run away from tear gas thrown by U.S. Embassy security men, during a protest to condemn air strikes on bases belonging to Hashd al-Shaabi (paramilitary forces), outside the embassy in Baghdad, Iraq January 1, 2020. Photo by Thaier al-Sudani/Reuters

What life is like for Afghans under Taliban control