The images of the attack released by the rebels, known as Houthis, show armored vehicles with stenciled Saudi markings, arms and ammunition the rebels claim they seized.

It shows what appear to be corpses and wounded in Saudi military uniforms. Several troops identified themselves as Saudis.

The kingdom did not immediately acknowledge the attack. A Saudi-led coalition has been battling the Houthis on behalf of an internationally recognized Yemeni government since 2015. 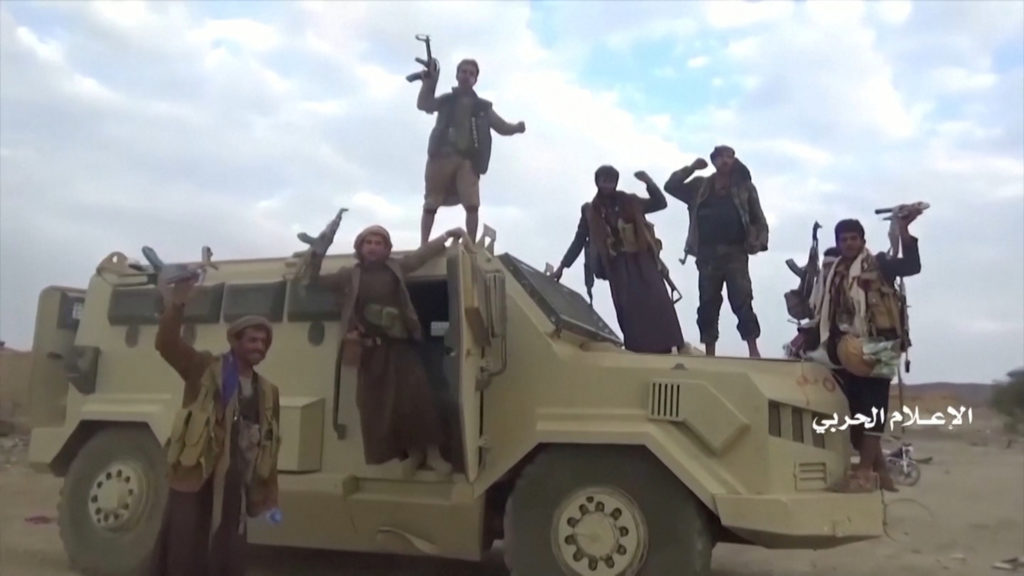 Houthi fighters pose on an alleged captured Saudi vehicle after an attack near the border with Saudi Arabia’s southern region of Najran in Yemen, in this still image taken from video on September 29, 2019. Houthi military officials claim that offensive defeated “enemy forces” leading to capture of Saudi soldiers, officers and vehicles. Photo by Reuters via Al Masirah/Houthi Military Media Center

In the past, the Houthis have claimed that they occupied Saudi villages after cross-border attacks, but often they enter a village, raise a banner, then pull out.

They have also held Saudi soldiers and officers captive in the past, using them as bargaining chips. Usually, they force the soldier to show his ID and speak on camera as proof. This time they did not show IDs.

Yahia Sarie, a spokesman for Houthi forces, claimed in a news conference Sunday the rebels took captive more than 2,000 troops, without offering evidence.

He also alleged that “three brigades have fallen,” and that the Houthis “liberated 350 kilometers square (135 square miles).”

Yemeni military officials said Sunday the soldiers the Houthis claimed they captured were fighters recruited informally by the Saudi-led coalition to fight inside Saudi Arabian borders. The officials spoke on condition of anonymity because they were not authorized to brief media.

Left: A member of Houthi forces fires on alleged Saudi positions during an attack near the border with Saudi Arabia's southern region of Najran in Yemen, in this still image taken from video on September 29, 2019. Photo by Reuters via Al Masirah/Houthi Military Media Center