Is the Supreme Court weakening the wall between church and state?

What Makes a Fetus a Person?
New York Times

“Making this constitutional case will require rejecting the concept that a rights-bearing person is fundamentally self-owning and autonomous.”

“Days after the U.S. Supreme Court ruled that states can prohibit abortion, Alabama has seized on the decision to argue that the state should also be able to ban gender-affirming medical treatments for transgender youths.”

"Better paid leave and child care policies can help the economy while easing the burden on women and families."

"Andrew Weissmann, a former Justice Department official and FBI general counsel, said there is "an absolute gold mine of witnesses" prosecutors could pursue going off Hutchinson's blockbuster testimony on Tuesday”

Life In A Post-Roe World 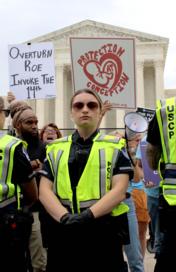 Cries and cheers could be heard simultaneously in the streets surrounding the Supreme Court. 49 years after abortion was deemed Constitutional at the federal level, the decision was overturned. On Friday, June 24, the Supreme Court released their 6-3 opinion of the Dobbs v. Jackson Women’s Health Organization case, determining that the right to a legal abortion should be left to the states.

Johnny Depp Wins Defamation Case, But Is This A Set Back For Women?

June 03, 2022
Written by: Ava Sekowski
After six weeks of testimony from Johnny Depp and Amber Heard, a unanimous decision was made — Depp won. The jury sided with Depp on all three counts of defamation against Amber Heard, awarding him 15 million dollars. While many fans are thrilled with this outcome, the verdict has caused speculation about the impact this will have on the #MeToo movement and women coming forward to speak about their abusers.
To understand the possible implications here's a breakdown of what happened.
Read More »

This week on To The Contrary

Answer questions correctly and we'll send you To The Contrary memorabilia!

Sign up for the TTC Newsletter! Enter your name and email address below: