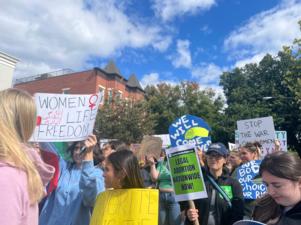 Protesters gathering in the Folger Park before the start of the Women's Wave rally and march.

College students with opinions on our society and how it works, families wanting a better future for their children, and women fighting for what they believe are health rights all came out to the Women’s Wave march in hopes of making a difference.


The Women’s March organization mobilized the Washington, D.C community to support a woman’s right to have an abortion. Organizers called on attendees to vote in the upcoming midterm election for democrats and pro-choice candidates.

Using the chant “We won’t go back!” to highlight the overturning of Roe vs. Wade, hundreds of people marched from the Capitol Hill neighborhood to the U.S. Capitol.


Focusing on the local public, Native D.C speakers at the march insisted lawmakers of the area keep it a safe haven for women across the country to seek an abortion, and to finally give D.C statehood.


Along with the other speakers at the event, Rachel Carmona, Executive Director of the Women’s March organization, inspired the crowd with talk about the fight for women’s rights and the importance of women to society.


“As we go, we need to use our voices to represent all the women here, and abroad, whose voices are being silenced,” said Carmona. “We as American women will amplify their voices and join our sisters in this fight for freedom.”


Worsening situations and conflicts for women abroad and at home were used as other reasons this pro-choice rally told people to vote.


For many involved, the Women’s Wave march highlighted that the fight for women’s rights and freedoms is not over and is not something that one protest or rally will change.


It takes continuously women standing together in not only this midterm election but also all future local, state, and federal elections. For them, it takes electing pro-choice women candidates into office.


Though it is not the only motivation for people to get out and vote, abortion rights is definetly one of main reasons for both Republicans and Democrats. This issue has a hold on the American people and will affect the midterm election outcomes.