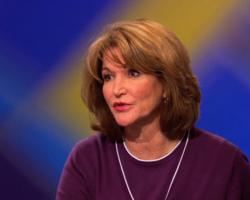 Angela 'Bay' Buchanan is President of The American Cause, an educational foundation dedicated to advancing traditional conservative issues. She also chairs Team America, which is a political action committee devoted to border security and immigration reform.

Ms. Buchanan began her political career as the National Treasurer of Ronald Reagan's presidential campaigns in 1980 and 1984. This position catapulted her into a distinguished career beginning in 1981 when President Reagan appointed her to be Treasurer of the United States. At the age of 32, she was the youngest person to hold that position since it was established in 1775.

Bay served as the campaign chairman for all three of her brother's presidential campaigns. During the 1996 presidential primary season, she emerged as a national figure steadfastly championing the right to life of the unborn child. In the summer of 1996, George magazine recognized her as one of the top 20 political women in the nation.

During September of 1996 through August of 1999, Bay co-anchored "Equal Time", a political talk show initially on CNBC, then MSNBC. In addition, she worked as a political analyst for "Good Morning America" throughout the general election in 1992. And from 1996-1997 Bay hosted a two-hour radio talk show program covering current events. Bay is a regular political analyst on CNN. She recently penned a biography on former First Lady, Hillary Rodham Clinton, and now serves as senior advisor on Congressman Tom Tancredo's Presidential campaign.