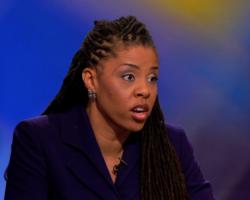 Avis A. Jones-DeWeever, Ph.D. is the Executive Director of the National Council of Negro Women (NCNW). Prior to this position, she was the Director of NCNW's Research, Public Policy, and Information Center. The RPPI Center is a research/action institute which seeks to inform, catalyze and mobilize African American women for change in both the policy arena and throughout the broader cultural dynamic.
Dr. Jones-DeWeever is the author of numerous publications focused on policy-issues of particular importance to women of color. In addition to her written contributions, Dr. Jones-DeWeever is a highly sought-after political commentator. Her policy perspectives have been shared through a variety of print, radio, and television outlets including: CNN, ABC News Now, Voice of America Television, the Canadian Broadcasting Corporation (CBC) News, National Public Radio, Pacifica Radio, America Urban Radio Network, BBC Radio-International, Glamour Magazine, Essence Magazine, the New York Times, the Washington Post, and Vital Speeches of the Day.

Dr. Jones-DeWeever received her Ph.D. in Government and Politics from the University of Maryland, College Park. She currently serves on the Board of Directors of the Women's Voices. Women Vote. Action Fund, and maintains the position of Affiliated Scholar with the Institute for Women's Policy Research.