Known to all simply as Lucy, Ball portrayed a scatterbrained housewife with the ability to turn simple chores into unparalleled fiascoes. 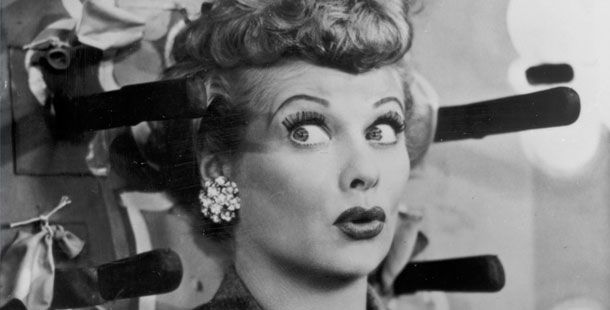 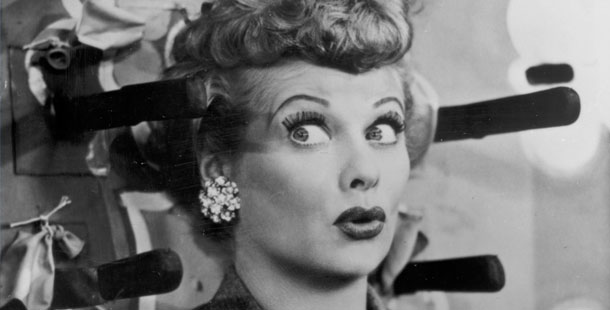 For more than thirty years, Lucille Ball was one of the most recognized and loved entertainers in the world. Known to all simply as Lucy, she portrayed a scatterbrained housewife with the ability to turn simple chores into unparalleled fiascoes. Clumsy and unsophisticated at nearly everything she tried (and she tried nearly everything), the television Lucy won the hearts of average Americans across all social and cultural lines with her wacky schemes. Ironically, it was Ball’s wide range of experience and talents that made her such a success in this role.

Dropping out of high school at the age of fifteen, Ball moved to New York to study acting and found her first stage work as a chorus girl in 1927. She had her first break as a poster-girl for Chesterfield cigarettes and soon found herself in tinsel town as one of twelve slave-girls in the Eddie Cantor film, Roman Candles (1933). By the mid-1930s, if you went to the movies (and in the 1930s everyone went to the movies) you would be certain to see Lucille Ball. Sometimes a nurse or a dancer, sometimes a flower clerk or a college girl, but always there. By the end of the decade she had been in forty-three films and was known as “Queen of the B Movies.”

Though universally recognized as a true talent and charismatic performer, Ball had yet to find the niche that would shoot her to super-stardom. From one film to the next her roles would change from the seriously dramatic to the light-hearted romantic lead. Dramas, Comedies, Musicals, she would and could do anything. But it wasn’t until her part on the radio show “My Favorite Husband” that her true genius appeared. “My Favorite Husband” was a situation comedy about a housewife who was always getting into trouble. Over the airwaves, Ball’s beauty and grace were invisible and what was left was that perfect comic timing and tone. With a pause, a stutter or a firmly asserted absurdity she could express all of the quirky awkwardness of physical comedians like Keaton, Chaplin, or the Marx Brothers, and the audiences ate it up.

After two successful years of “My Favorite Husband,” Ball moved her act to the new medium of television, bringing along her husband, the Cuban band leader Desi Arnaz, as a co-star. Together they created the most popular television show of the 1950s. I Love Lucy was the perfect home for Ball – a place where she could return to the physical comedy she was master of, while working alongside the man she loved. This love, of the work and the people, came through and created a unique, more personable kind of star, one unknown before television. For many Americans, tuning in every week was a way of seeing what an old friend was up to. Each new show looked at a different aspect of everyday life, finding humor in our dreams and frustrations.

Removing herself almost completely from the big screen, Ball embraced television and became a master of the medium. With Arnaz she formed Desilu Studios to gain greater control over her work, and with it pushed television into its golden years. She cultivated a personal image that corresponded to that of her television characters and in doing so broke down one of the most profound barriers between actor and audience. Like no one before or since, she seemed a part of the family. When she was pregnant with her second child, her character became pregnant, and on the day she delivered Desi Junior, her on-air persona did the same. For many she was a great symbol of the changing times and letters and gifts arrived from around the country celebrating this personal and public occasion.

After a successful ten year run, the pressures of the industry and public life became too much and Arnaz and Ball canceled the show and were divorced. Soon Ball became president of Desilu and within a short while returned to television. Deciding to stick with her well-loved character she developed a new series called The Lucy Show in which she worked with former I Love Lucy co-star Vivian Vance. Though never to reach the heights of I Love Lucy, The Lucy Show (and later Here’s Lucy) ran for a combined twelve years with a great deal of success. Ball had found the key to television — she had made a character Americans could not live without.

More than her seventy plus films, her hundreds of television appearances, her work running a studio which brought us such major television series as Mission: Impossible and Star Trek, Ball’s true legacy can be found in her understanding of the possibilities of television before it understood itself. She saw that it could have the excitement of vaudeville, the wonder of the movies, and come directly to people’s homes with the intimacy of the radio. Since the premiere of I Love Lucy in 1951, Lucille Ball’s oh-so-human character has graced the small screen, and it is a testament to her visionary talent that it is hard to imagine television without her. 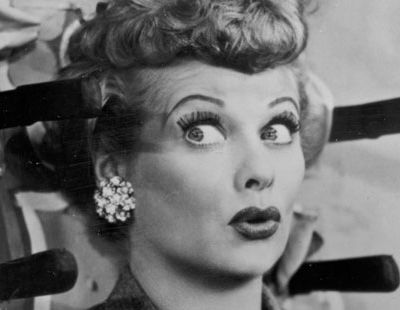