Bats: mammals of the order Chiroptera.

Bats comprise the order Chiroptera, stemming from Greek origin meaning “hand-wing” to describe the mammal’s unique anatomical feature. The order is the second-largest order of mammals, following only rodents. Bats make up about 20% of all classified mammal species worldwide, with over 1,300 species.

The order is comprised of two suborders: the Megachiroptera and the Microchiropetera. Despite what their names may suggest, not all Megabats are larger than Microbats. Megabats consist of a single family: the flying foxes and their Old World fruit and flower-eating relatives. Meanwhile, the Microbats are composed of the rest of the 17 bat families. 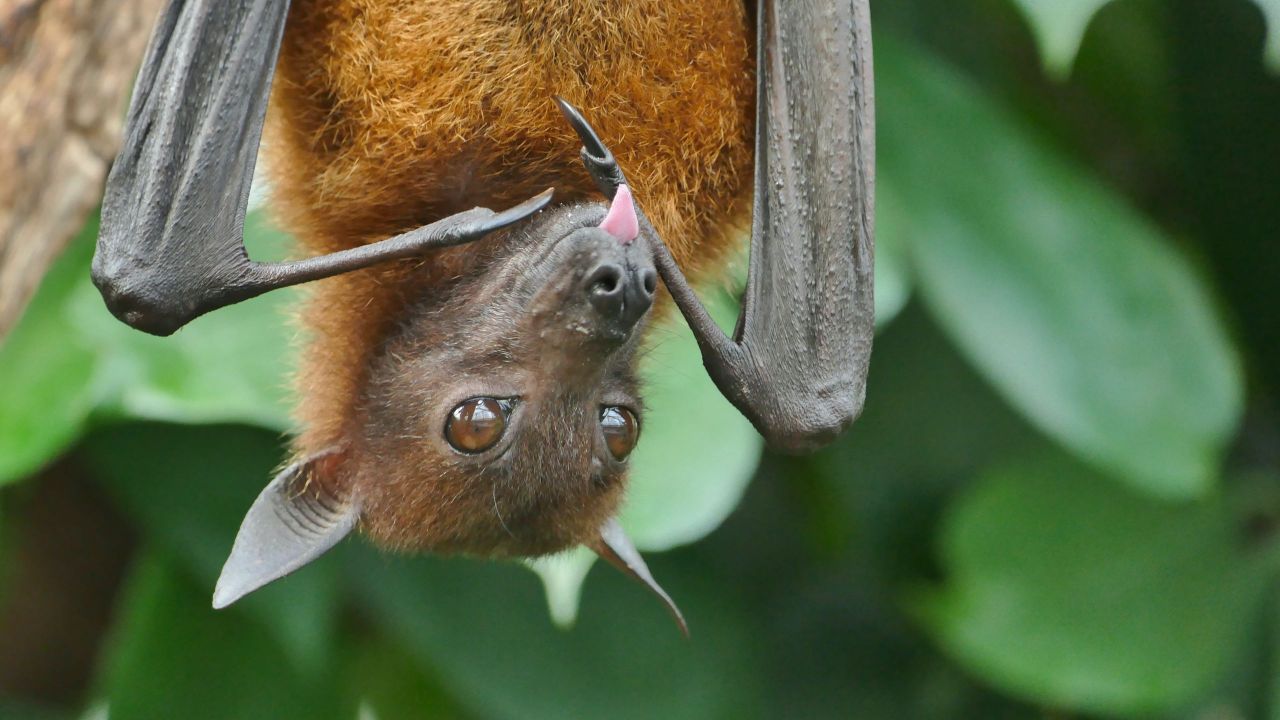 Bats range in size and weight depending on the species. Flying foxes are the largest bats. The giant golden-crowned fly fox (Acerodon jubatus) is the largest with a weight of up to 3.5 pounds and a wingspan of up to 67 inches. The Kitti’s hog-nosed bat (Craseonycteris thonglongyai), also known as the bumblebee bat, is the smallest bat, weighing only 0.06 to 0.09 ounces and a wingspan of about 6 inches.

A bat’s most distinct feature is its forelimbs adapted as wings, making the bat the only mammal capable of sustained flight. Their appearance varies depending on the species, but in general, they have short snouts, large ears like a rodent, and fur-covered torsos. They come in a variety of colors including black, brown, red, tan and gray. 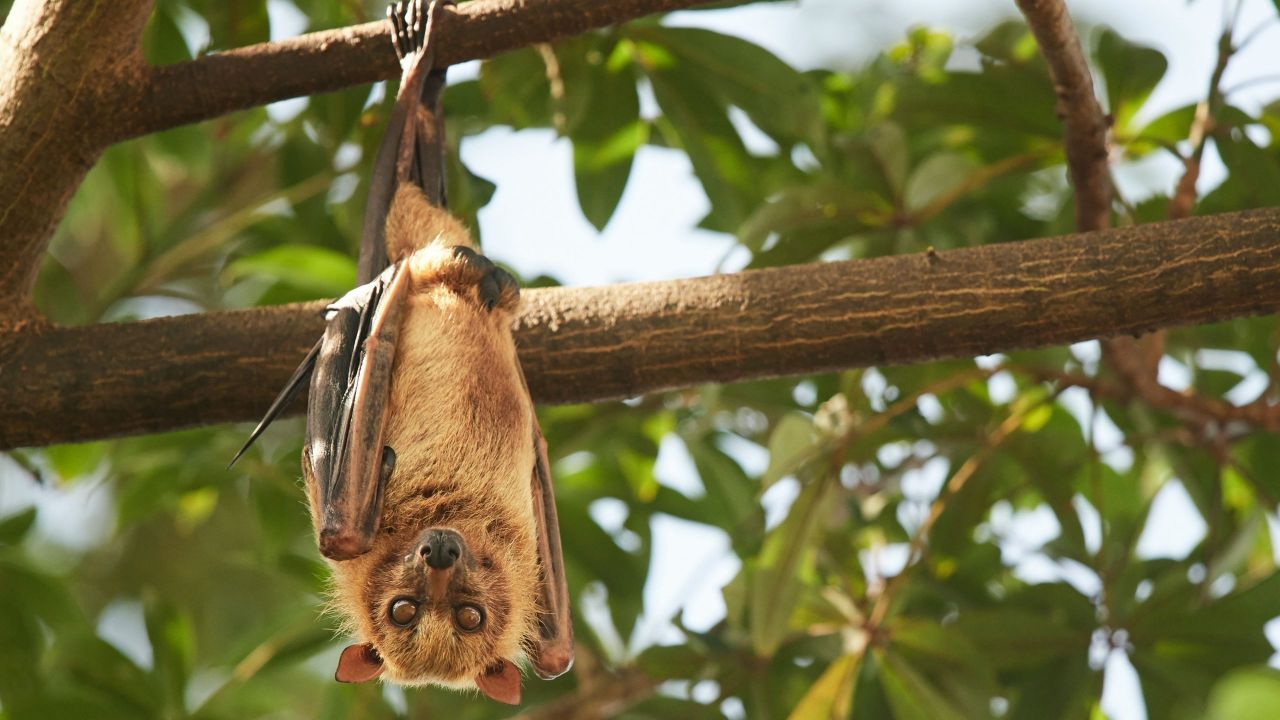 Bats are carnivores. Their diet varies depending on the species. Megabats are more likely to feed on fruit, pollen and nectar, while microbats are more likely to consume a variety of insects, such as moths, beetles, gnats, and crickets. Bats’ nocturnal behavior provides an advantage for their insect-heavy diet, as many insects fly at night. There are also fewer competitions for food at night. Vampire bats are the only species of microbats that feed on blood. Blood-feeding species prefer to feed on horses and cattle than on humans.

When catching prey, a bat’s vision is often important than its sense of sound. Insectivorous bats often use echolocation, an acoustic orientation, to locate and catch prey. They emit a series of supersonic cries through the mouth or nose and detect flying insects by the echoes reflected back. Many of the species that produce these sounds through their nose have a flap of skin, called a nose leaf, above the nostrils. While scientists are not sure of the exact function of a nose leaf, it is believed to help these species direct the sound. 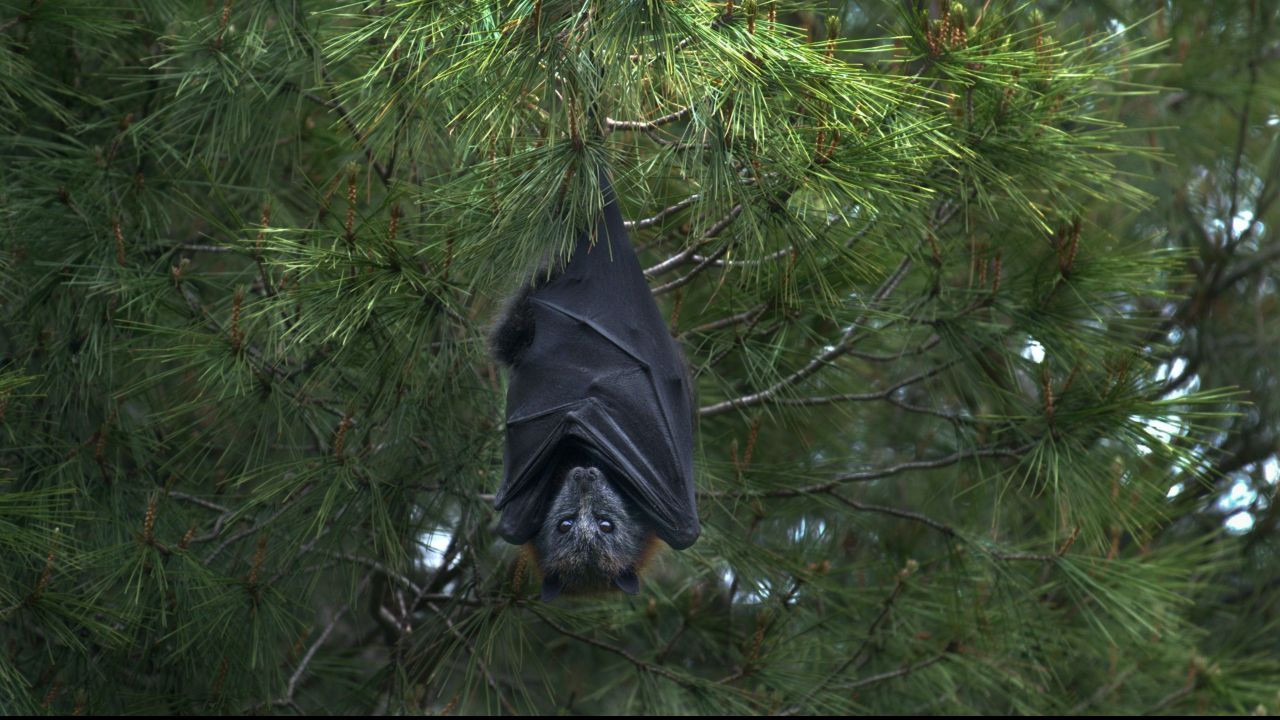 Bats can be found in a variety of habitats, including deserts, tropics, wetlands, woodlands, suburban communities, caves, and cities. Bats spend the daylight hours resting in roosts, which can be made from a variety of structures like trees, caves, and old buildings. These structures provide shelter and help keep them protected. The seasons often dictate where a bat will choose its roost because many bat species hibernate in winter. 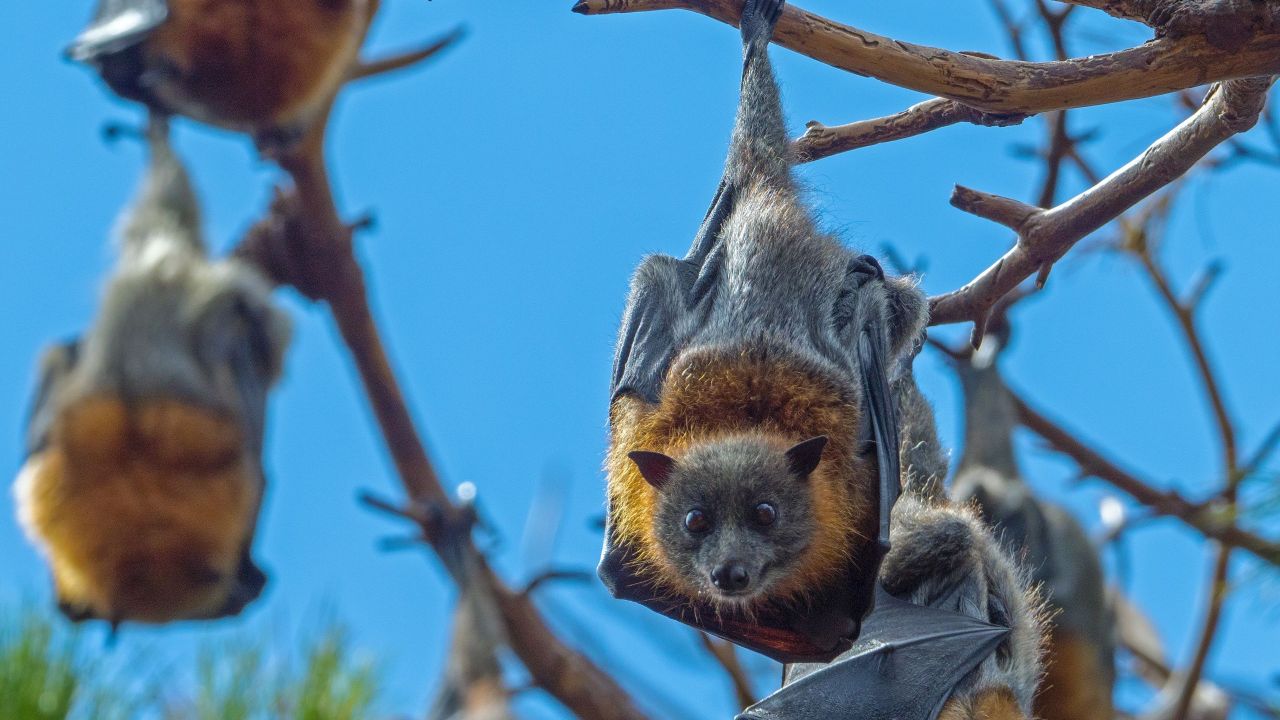 The mating rituals of bats vary depending on the species. Bats are typically polygynous, where males mate with multiple females. However, there are numerous species, such as the yellow-winged bat, that are monogamous. For most species, males and female bats tend to stay segregated unless they are ready to mate. Once females are pregnant, hundreds of them may form a maternity colony that is a sub-area of the larger colony.

A female bat gives birth to one young at a time but may have multiple litters during the breeding season. The breeding season typically occurs when temperatures are warmer and food is more abundant. When giving birth, the female hangs head up as the young are born, feet first. She catches and holds the newborn in the pouch formed by the interfemoral membrane. The newborn, which is born large and well developed, will crawl up and attach itself to its mother’s nipple to feed. The newborn will stay attached to its mother for the first few days, even when the mother flies out to feed. As it grows in strength, the newborn will stay behind and cling to the wall or roof of its shelter while the mother goes out to feed.

While newborns are born well-developed, they often don’t have fully developed wings. It isn’t long after their wings are developed that the newborn will start to venture out on its own. Depending on the species, bats can be fully independent anytime from six weeks to four months of age. While the mother cares for the young in most species, both the mother and father help raise the newborn in monogamous species.

Most bat species are social and live in large groups called colonies that can grow to over a million bats. It can be hard to find a safe roost, which often causes bats to congregate in one location. Living in large groups lessens the threat of individual predation. However, there are some bat species that lead solitary lives, such as the mouse-eared bat.

Bats emit different sounds, most likely to communicate with each other or to indicate emotion. Purrs, clicks, and buzzing often precede mating of some species. 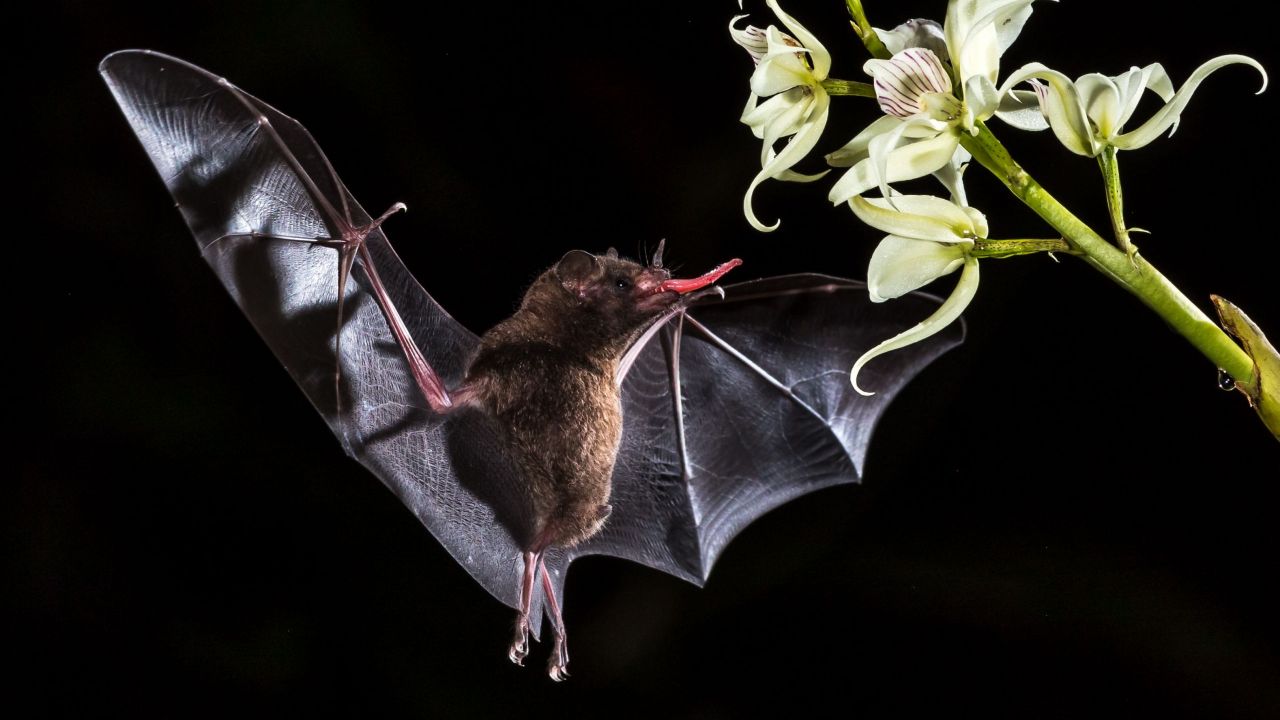 Bats face a number of threats, including disease, windmill turbines, roost destruction, habitat loss, and climate change. Human-related activities are the largest threat to bat species. Humans have caused the extinction of several species of bats in modern history. Most recently, the Christmas Island pipistrelle (Pipistrellus murrayi) was declared extinct in 2009. 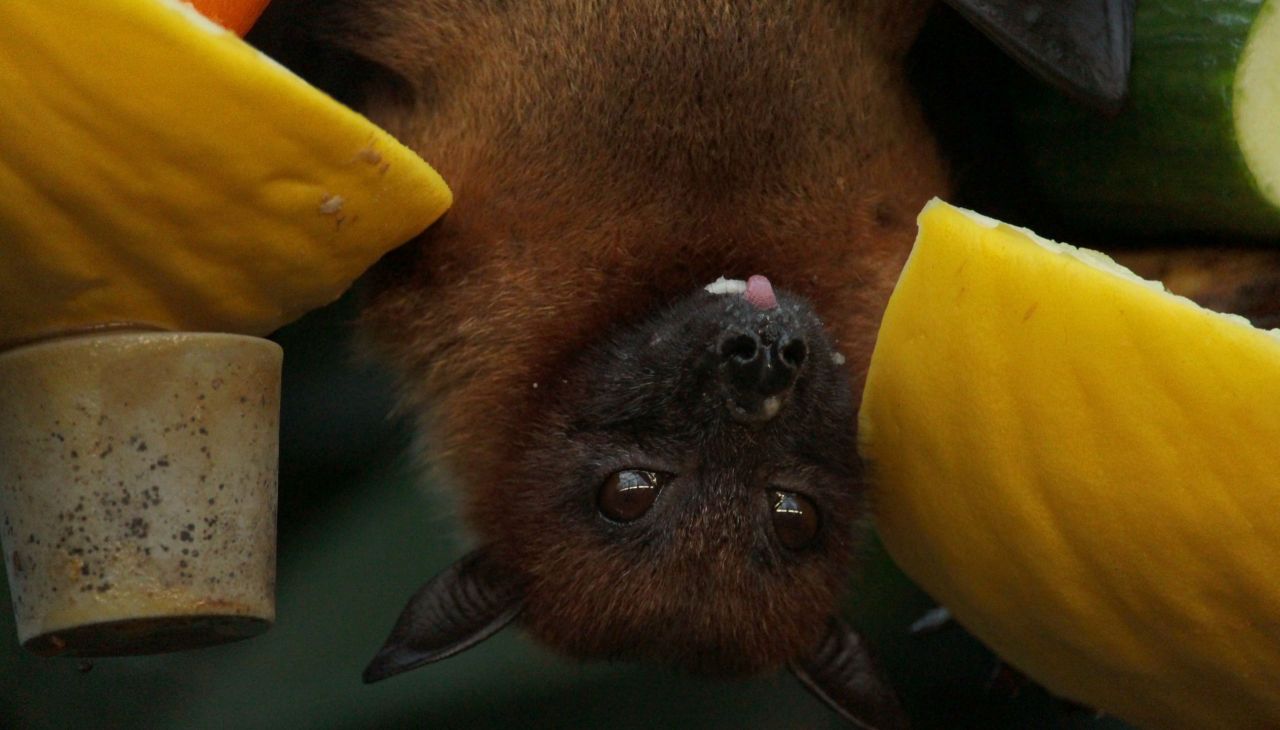 In certain areas around the world, bats are protected under the law. The Wildlife and Countryside Acts protect bats in the United Kingdom, punishing those that disturb a bat or its roost with a heavy fine. In Sarawak, Malaysia, the Wildlife Protection Ordinance 1998 protects “all bats,” but some species like the hairless bat (Cheiromeles torquatus) are still eaten by the local communities.