This piece comes to us from Luke Warwick, the Director of Shark and Ray Conservation for Wildlife Conservation Society (WCS). 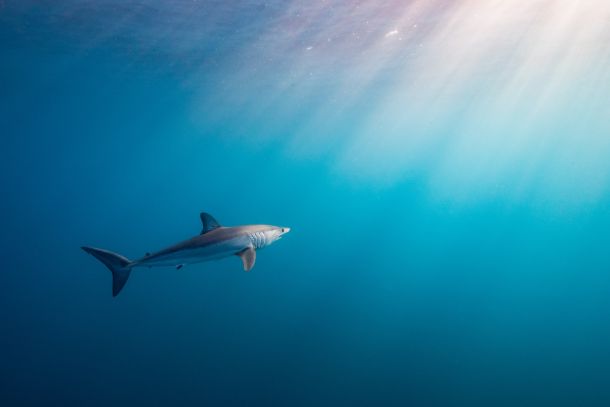 As shark sightings catch our attention this summer, it is time for journalists, producers, and podcasters to rethink how they communicate about these unique and imperiled fish. At a time when phrases like “shark-infested waters” and “man-eater” find their way into our consciousness, it’s important to remember that sharks have far more to fear from humans than humans have to fear from sharks—with all species at tiny fractions of their historical numbers.

The media can play an important role in the conservation of these extraordinary—and extraordinarily threatened—animals by helping their audiences understand and appreciate them rather than fearing the “killer” species hyped in film and television.

With no offense to “Jaws,” can we stop talking about needing to get a bigger boat and spend some time exploring the late maturity, long gestation, and live births most sharks share with our own species? Those characteristics are in fact what makes the recovery of sharks so difficult and why stronger shark conservation measures are needed globally, to prevent overfishing from driving extinctions, with many sharks already endangered species.

To help that effort along, let’s dispel a few myths. 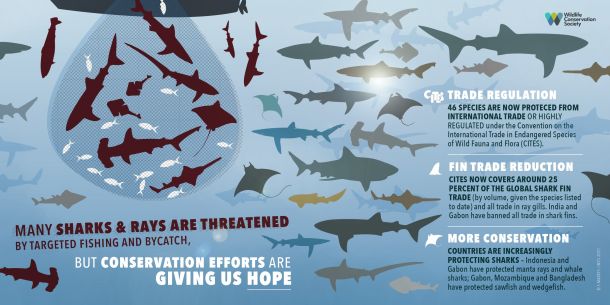 Many sharks and rays are threatened by targeted fishing and bycatch, but conservation efforts are giving us hope. Graphic by Sarah Markes/WCS

First, sharks are not mindless eating machines. The vast majority of shark species are completely harmless to humans and shark sightings are common. In fact, many shark species are in sharp decline around the world due to human activities and over-fishing. Their role in the ecosystem is vital to maintaining healthy oceans by maintaining balance in the food chain and controlling populations of prey species that feed, for instance, on threatened sea grasses and corals.

Second, shark attacks are extremely rare. It is very unusual for a shark to attack a human. While many sharks have sharp teeth, the vast majority do not pose a serious threat. Still, an inadvertent brush against the flesh can be mistaken for an attack. If someone sees a shark, they should simply leave it alone and move away from it. Sadly, sensational shark reports have resulted in beach closures and people fishing for, pulling from the surf, and killing sharks.

Third, sharks are not the most dangerous species in the ocean. That distinction goes, yes, to us humans. Sharks are imperiled because their slow reproduction cannot keep up with the 100,000+ sharks that are taken from the water every day. Forty-six species of sharks and rays have been listed under the Convention on the International Trade in Endangered Species of Wild Fauna and Flora (CITES) to control the unsustainable trade of sharks and shark products. 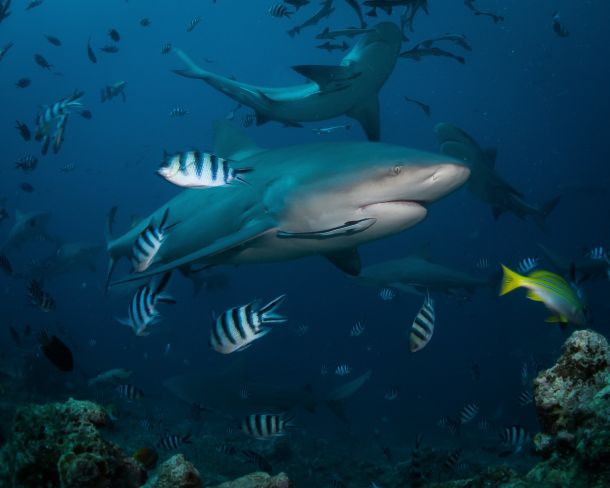 The bull shark is an apex predator on the worlds coral reefs. Photo credit: Emily Darling/WCS

As an alternative to these fear-inducing myths, we can highlight the growing global movement that recognizes that sharks are vulnerable and need to be either protected like other marine wildlife or carefully managed via sustainable fisheries. Nations are slowly recognizing sharks are vulnerable and doing something about it. Indonesia, Gabon, and Mozambique have protected manta rays and whale sharks; Gabon and Bangladesh have protected sawfish and wedgefish; and India and Gabon have fully banned all trade in shark fins.

Indigenous peoples and small-scale fishers play an especially important role in saving sharks. In some parts of the world—especially the global tropics—sharks provide an important source of protein. This means careful approaches are needed in these locations to manage small-scale subsistence fisheries for sharks and rays to ensure they don’t drive species to extinction. Bangladesh, India, and Indonesia are leading the way in these efforts.

We have a great opportunity now to engage the public in this work, help them understand what is at stake, and take action to protect these vulnerable species. 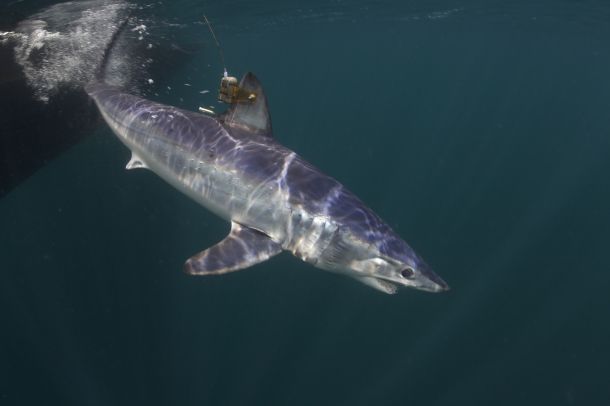 Take, for instance, the shortfin mako shark (Isurus oxyrinchus). Found in New York and the North Atlantic, this shark species—the fastest on the planet, able to swim up to 45 miles per hour—faces a critical conservation moment because of overfishing. To recover within the next few decades, scientists are recommending a complete ban on the retention of shortfin mako sharks in all commercial and recreational fisheries.

As a global leader in shark conservation, the U.S. needs to step up now in support of this retention ban. Indeed, by shifting the conversation from the threat that sharks allegedly represent to the threats sharks face themselves, we can begin to reverse decades of fear and misinformation about these poorly understood and underappreciated animals that rightly fill us with awe even as they play a critical role in the health of our marine ecosystems.