Biologists hail the comeback of Northern elephant seals, once hunted to near extinction for their oil-rich blubber, as one of conservation’s great successes. Now, they’re scrambling to protect the rebounding population’s habitat in Point Reyes, California from rising seas. 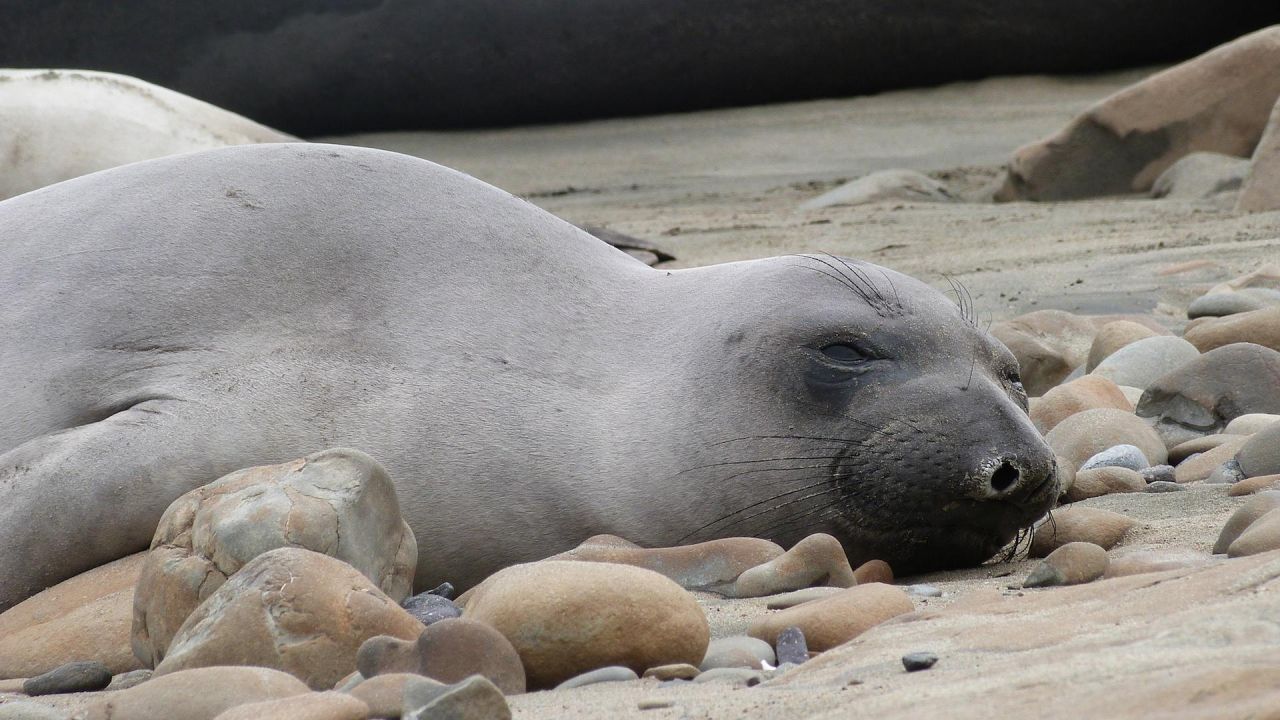 On a cloudy afternoon in May, Sarah Codde scans the water’s edge of a narrow Northern California beach. She looks out at hundreds of elephant seals resting in heaps along the wet sand and nestled against sandstone cliffs towering overhead. “I think I see one of our pink tags,” says Codde, a marine ecologist with the Inventory & Monitoring Program at Point Reyes National Seashore. She sidles up behind a supine pinniped, its head obscured by a rotund silver-gray torso flecked with patches of peeling fur and skin, to inspect the tag on its flipper. “We’re looking at the tag color, tag number and which flipper it’s on,” she says. “Then we try to ID sex.”

The seals haul out on California beaches from Baja California to Point Reyes, some 30 miles northwest of San Francisco, to breed, give birth and molt. The different colored tags, fastened to the animals’ back flipper like a stud in an earlobe, act as a pinniped barcode to indicate which colony a seal comes from and where it ends up. That data helps biologists monitor the health and distribution of seal populations, their migratory behavior and reproductive success. 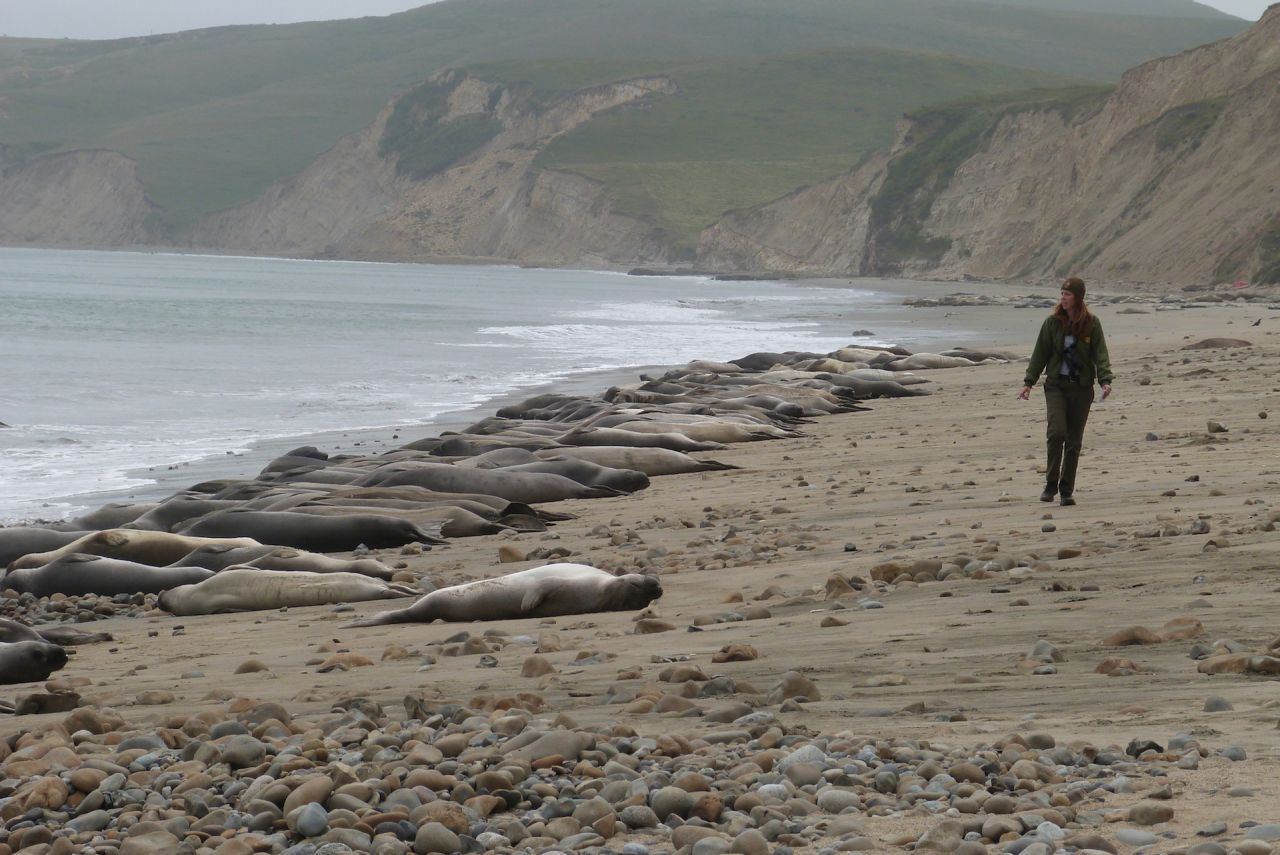 Northern elephant seals almost perished at the hands of 19th-century commercial hunters who killed all the whales they could find and turned to the seals as a new source of oil-rich blubber. The marine mammoths’ population dropped to between around 100 and 1,000 animals by the late 1800s then, after Mexico and California passed laws protecting them, rebounded to about 180,000 today. (Population counts are rough estimates because seals of different ages come ashore at different times.)

But now the seals off the coast of Northern California face a 21st-century threat: rising seas driven by global warming threaten to claim the sandy beaches elephant seals need to reproduce and molt. 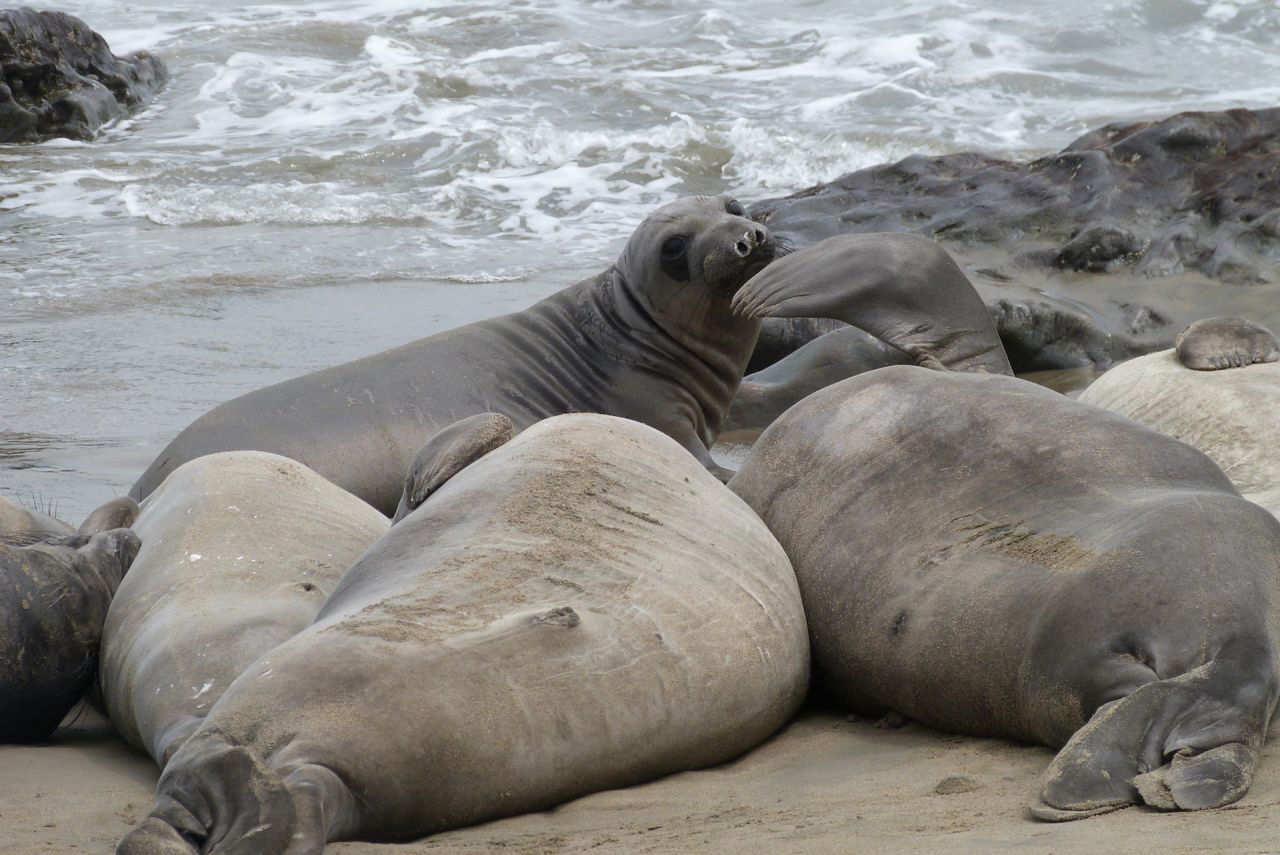 A group of elephant seals | All activities were permitted under NMFS Permit # 21425 |
Credit: Liza Gross

Nearly half of the potential breeding sites in Point Reyes could be flooded in 30 years if modeling scenarios reported by a team of biologists in 2012 prove accurate. About two-thirds of sites would be lost by the end of the century, the models predicted.

Codde and her colleagues long considered these scenarios as theoretical possibilities. But then a horde of seals plopped down right in front of the Drakes Beach visitor center parking lot, first in January and again toward the end of May. Freak May storms hammered their customary haul out location, about two miles away, forcing them to find a more sheltered site.

It looked like a normal molting season, Codde says, with lots of seals hanging out in their usual spots. “Then we had those crazy storms.”

Those crazy storms will likely increase in frequency and severity along with rising global temperatures. The roughest storms hit these beaches during the winter breeding season, often pulling large swaths of sand back out into the ocean. It couldn’t happen at a worse time. 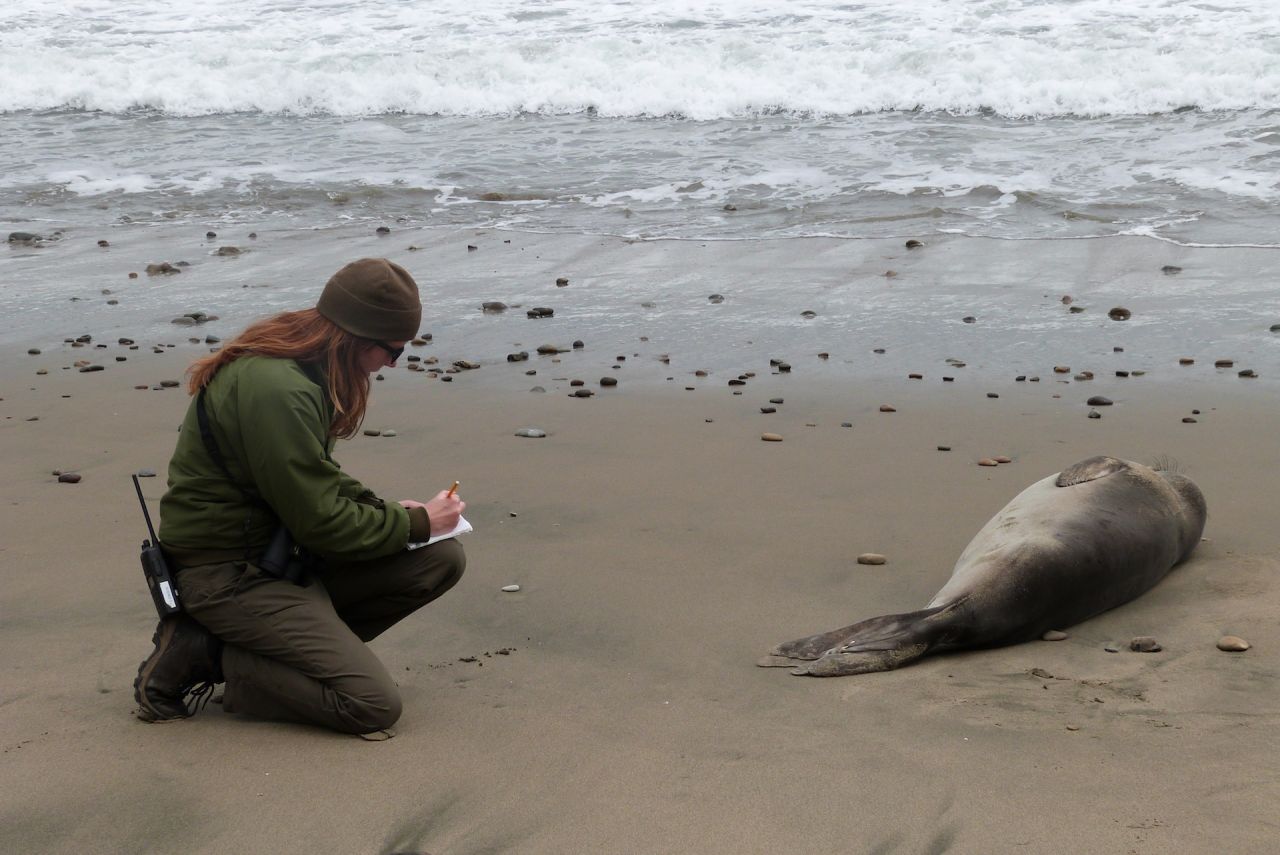 Winter storms deliver a double whammy to the seals, Codde says. They make beaches narrower and lower, which then allows surging waves to move up higher on the beach. That places pups, which can’t swim, at high risk of drowning.

Elephant seals returned to breed in Point Reyes in 1981, settling into an oceanside beach at Point Reyes Headlands at the park’s southwest tip, after an absence of about 150 years. They moved north, to the southern end of Drakes Beach, around the mid-1990s. About four or five years ago Codde saw the seals making their way toward the visitor center. “Each year they got a little bit closer,” Codde says. “We always just thought that we could somehow manage having seals being on the beach. We thought it would be more of a gradual change. But it’s happening so fast.”

Codde and her colleagues had to use large tarps to coax the seals away from the visitor center, to protect them as well as people. But that’s not a long-term solution. Park staff could conceivably close the beach or remove the parking lot if the seals keep returning. 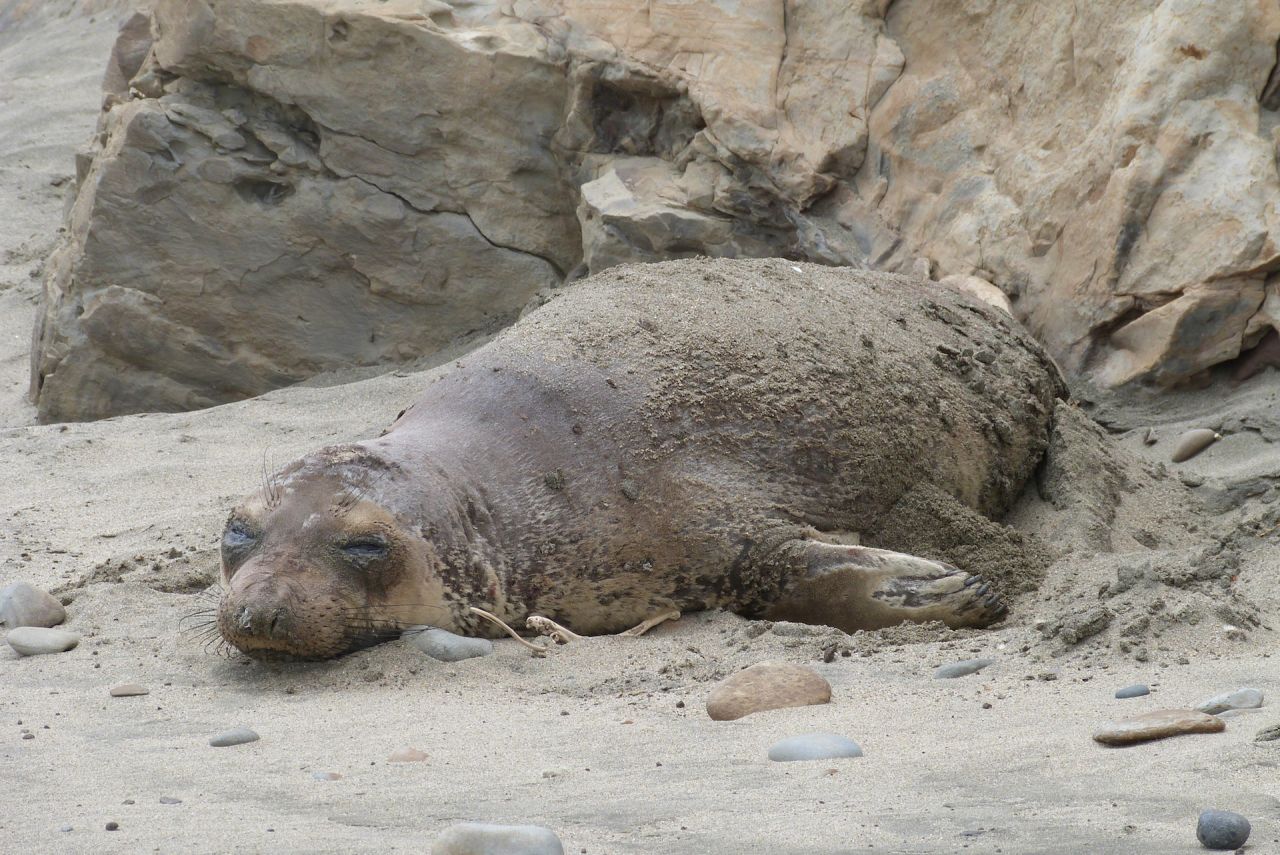 All activities were permitted under NMFS Permit # 21425 |
Credit: Liza Gross

Shrinking beaches also push elephant seals closer to the cliffs behind Drakes Beach. “These cliffs are constantly eroding,” Codde says. “That’s a big concern with them moving here. You get these massive landslides that could wipe everyone out.” So far about 1,800 seals came to molt this year at Drakes Beach and the headlands. After shedding their skin, which takes about a month, they head back to the open ocean, where they spend some nine months a year feeding on octopus, lantern fish and other denizens of the deep sea.

On this late May day about 450 elephant seals, mostly adult females and juveniles ranging from 1 to 4 years old, huddle flipper to flipper in two pods at a safe remove from the visitor center. Every so often a seal ambles awkwardly into the waves, its blubber undulating with each lurch forward. It’s easy to imagine how quickly seal hunters could decimate a colony.

Today, our influence on these top ocean predators is subtler, but could prove no less devastating. Climate change isn’t just threatening to claim their beach habitat. Warmer ocean waters may change the distribution of prey and reduce seals’ foraging success. 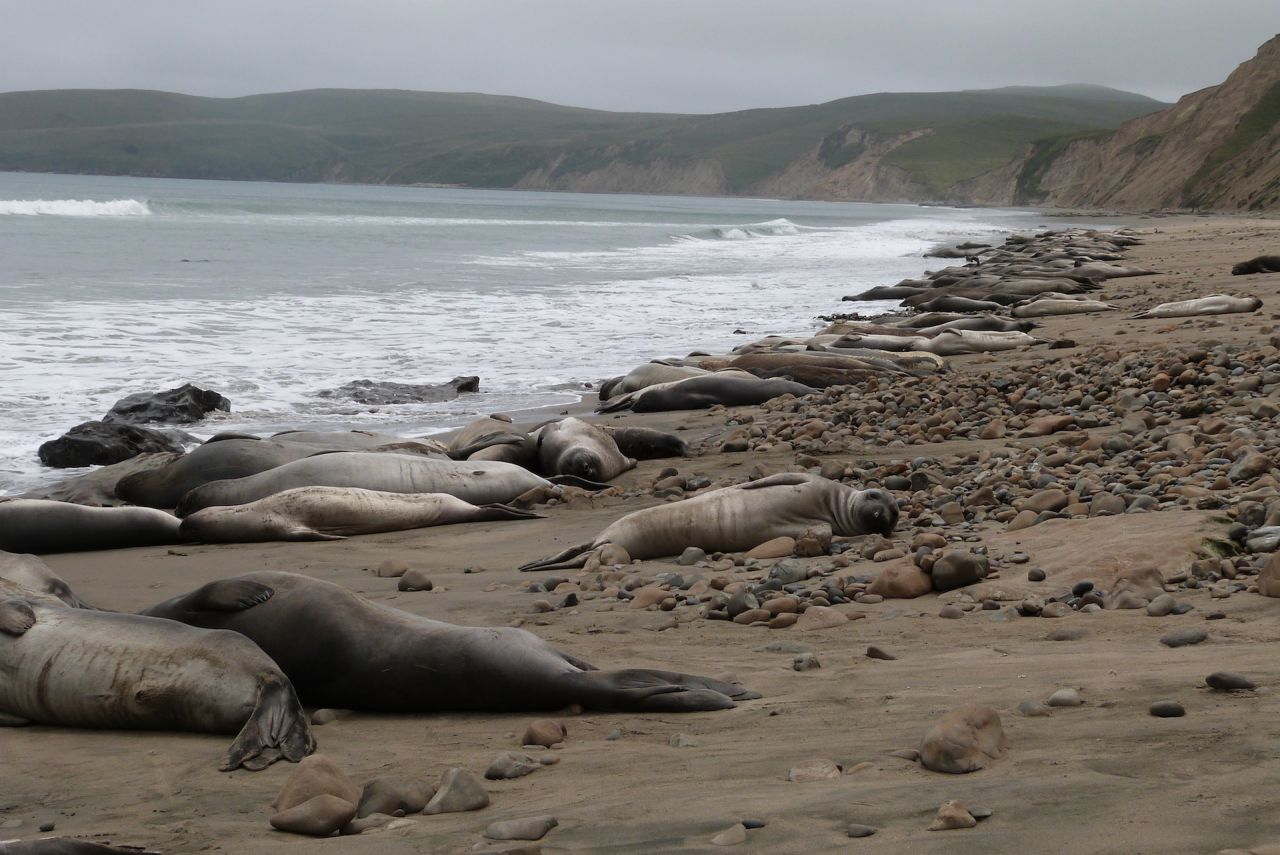 Biologists from Año Nuevo recently tracked females traveling much farther west than they’ve ever traveled before, Codde says. “The thought is that they’re traveling farther to find food.” Malnourished females can’t give their pups the calories that sustain them for months after weaning until they figure out how to hunt.

Elephant seals are the poster child for conservation, Codde says. All it took was outlawing hunting and protecting their habitat. Now, biologists have to make sure those protected areas include enough sandy beaches to shield elephant seals from the gathering storms.