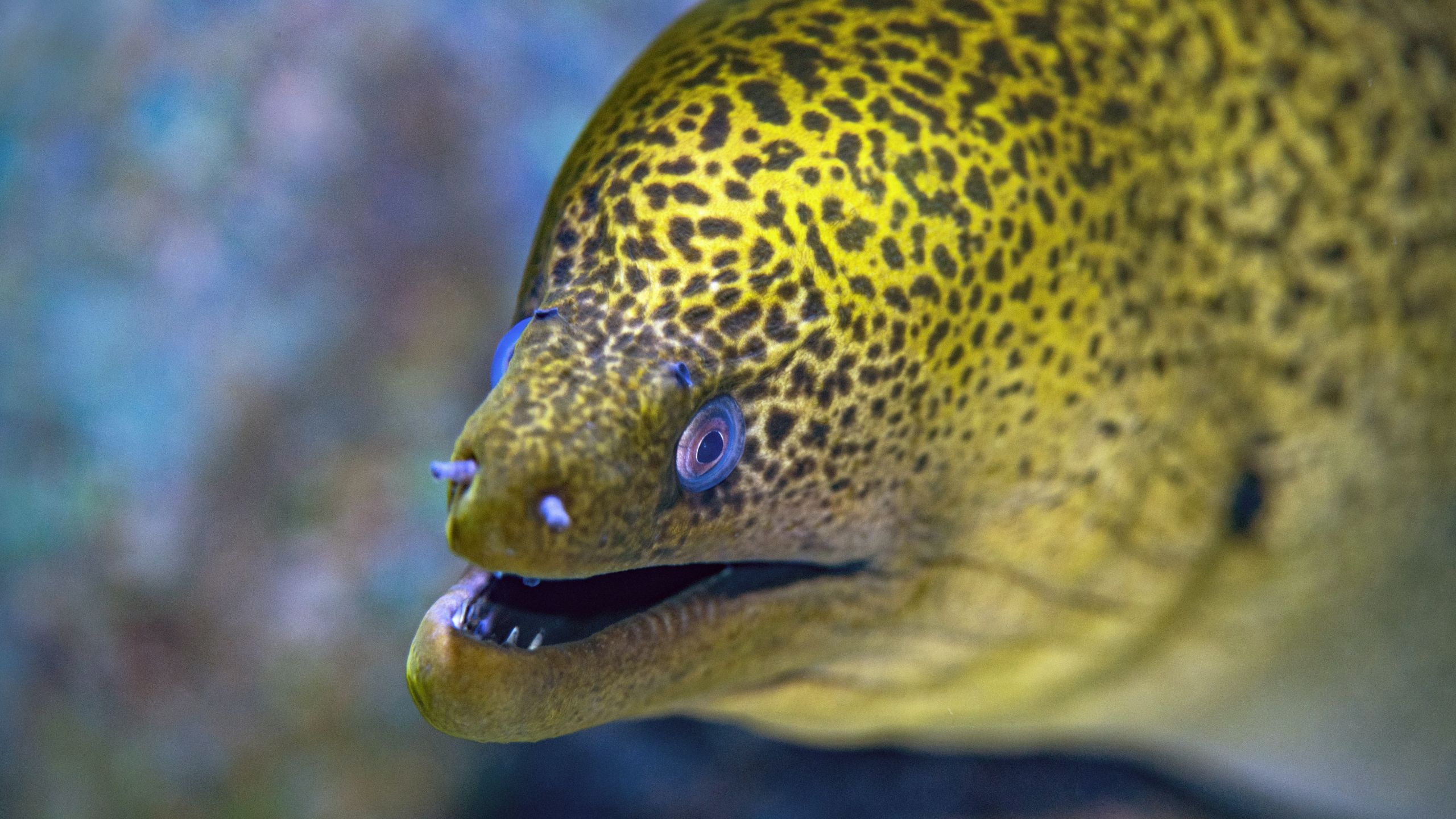 There are about 800 species of eels that belong to eight suborders, 19 families and 111 genera. 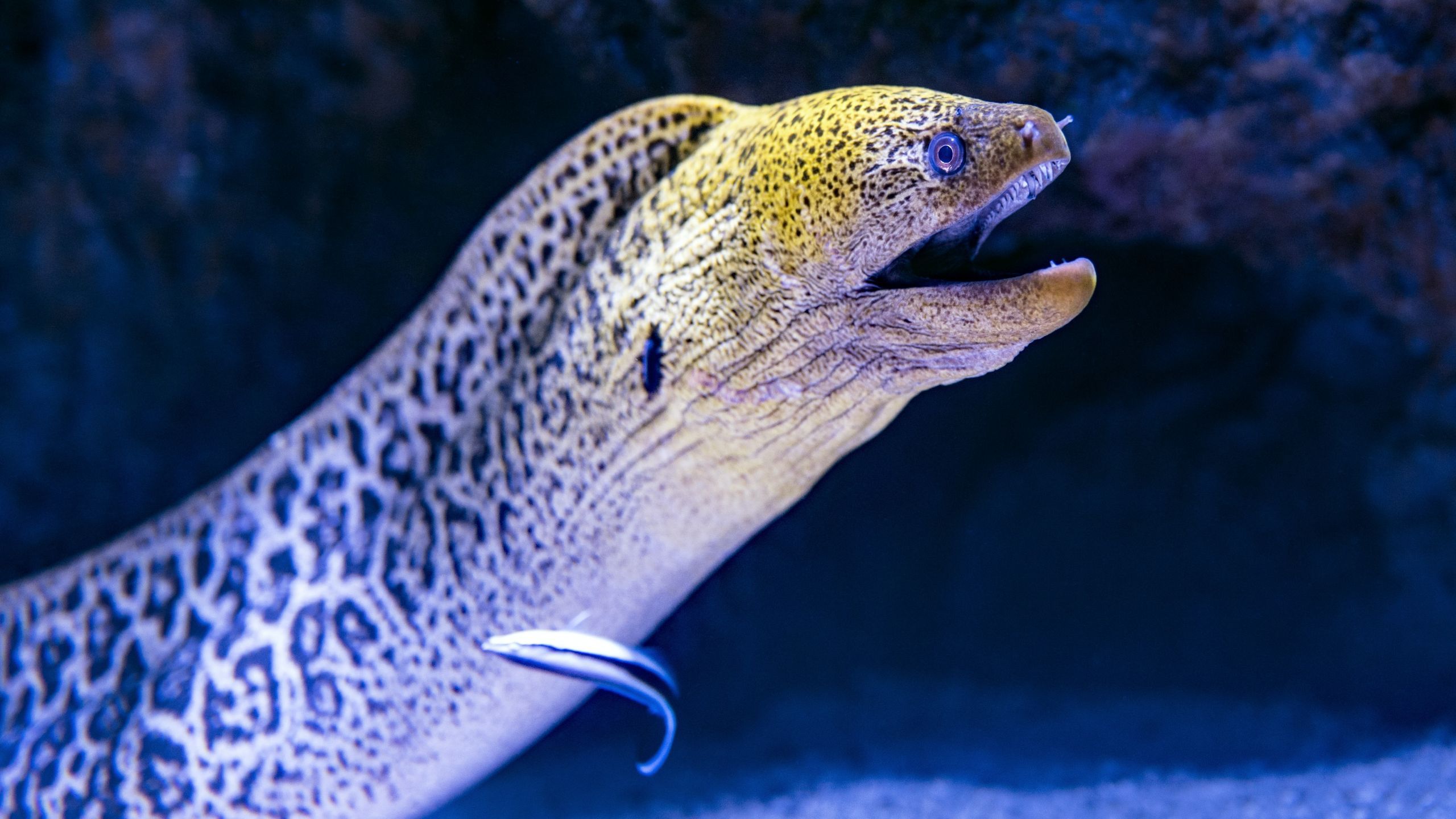 Eels vary in size depending on the species, ranging in length from just 2 inches in the one-jawed eel (Monognathus ahlstromi) to 13 feet in the slender giant moray (Strophidon sathete). They also range in weight from just 1 ounce to over 55 pounds. The heaviest species is the European conger (Conger conger), which was reported weighing 240 pounds at a length of 10 feet.

The body covering of an eel is typically scaleless. Their color ranges from drab gray or black in deep-sea species to colorful and patterned in tropical reef species. 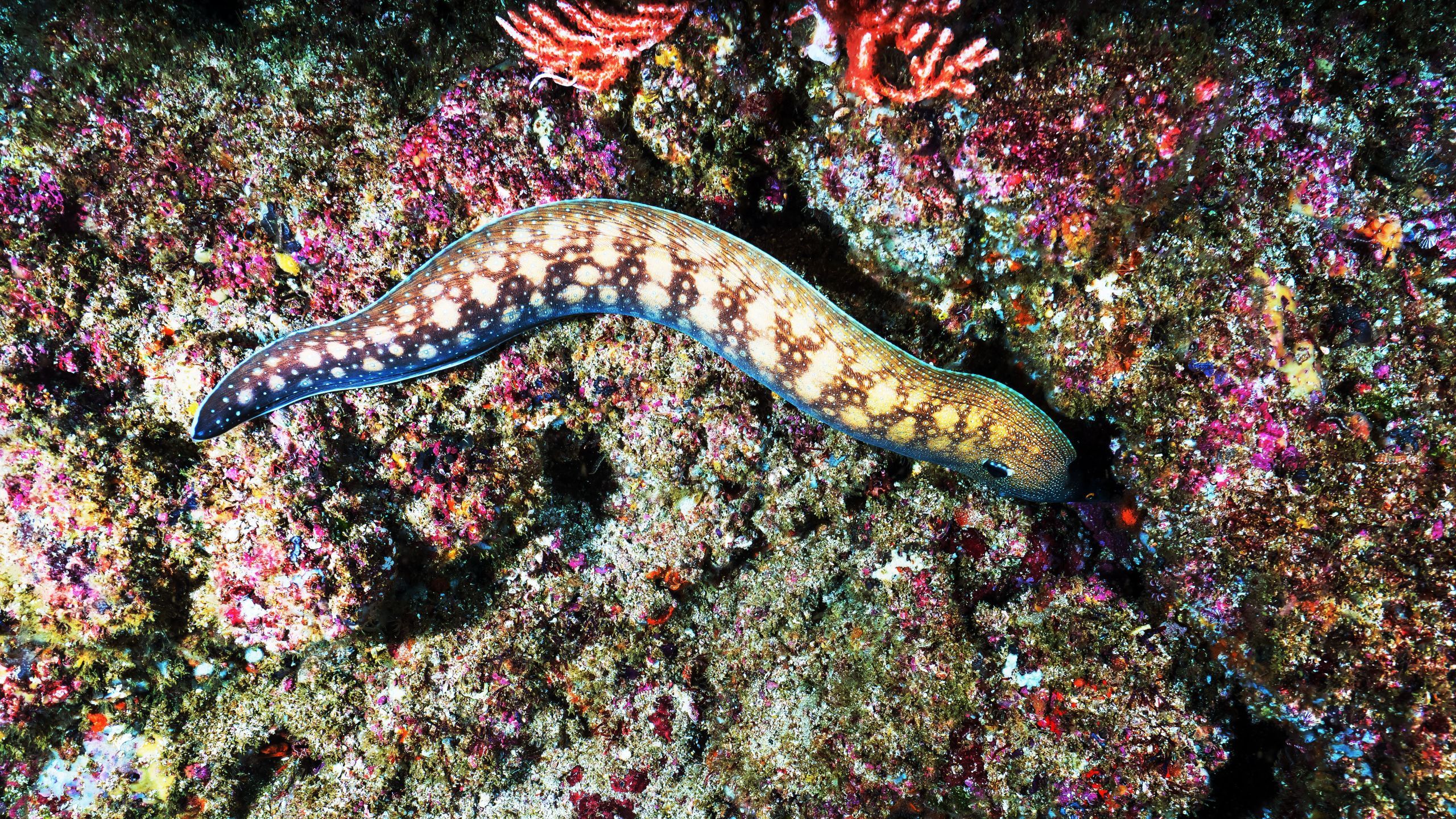 Eels can be found in both freshwater and saltwater, with the majority of species found at sea. While many eels can be found in the shallow waters of the ocean and burrow into sand, mud, or amongst rocks, other species live in deeper water on the continental shelves.

Unlike most fish, most eels are catadromous, meaning they spend most of their adult lives in freshwater rivers and streams and return to the oceans where they were first born to spawn. 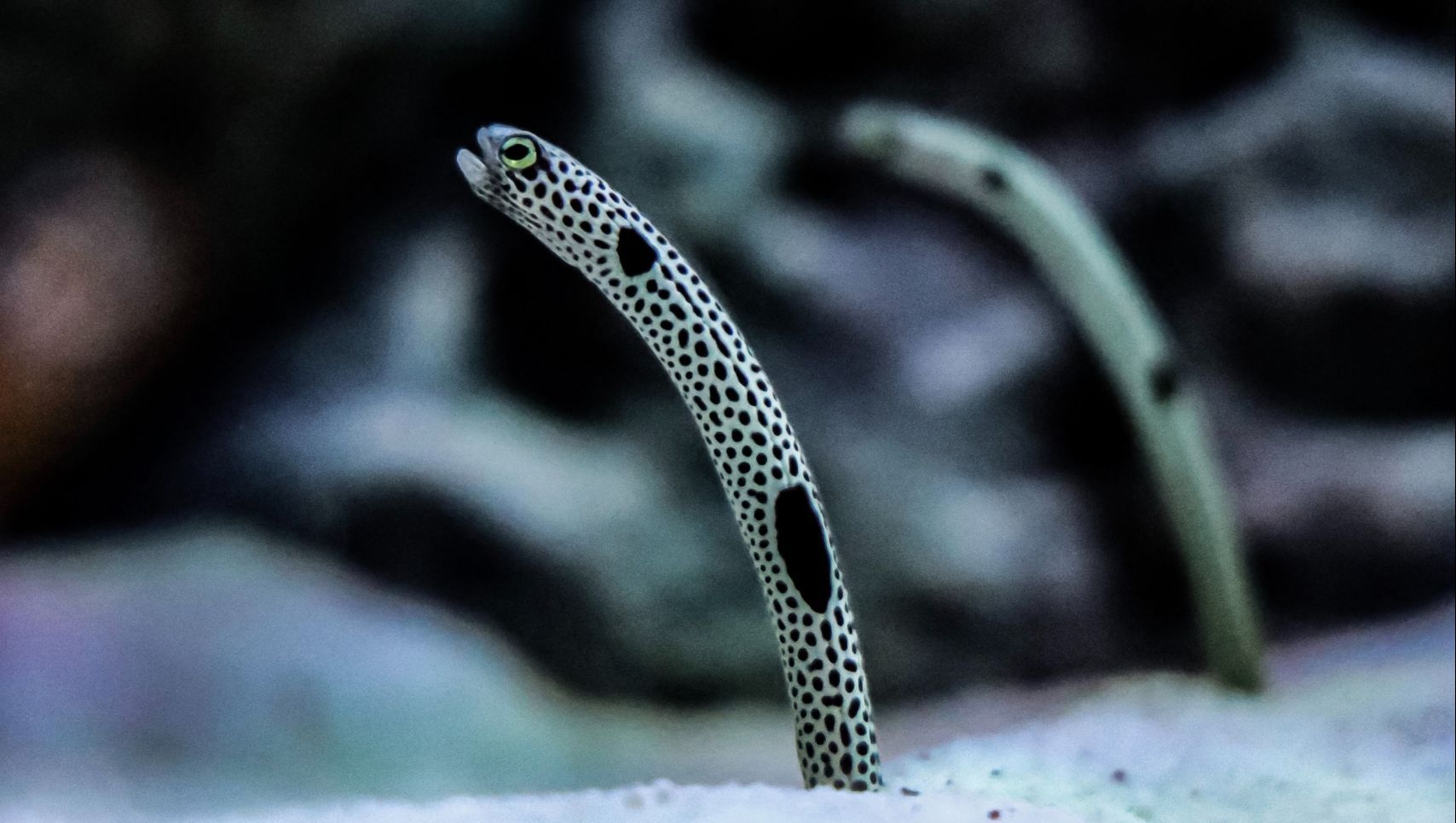 Much remains unknown about eel reproduction and mating. An eel begins its life as larvae, known as leptocephali. These larvae drift along the surface waters of the sea, feeding on small particles that float in the water. They then metamorphose into glass eels and then become elvers before finally seeking out their juvenile and adult habitats. Many eels remain in the sea throughout their lives, but freshwater eels travel upstream to rivers and freshwater habitats. Typically, when a freshwater eel reaches sexual maturity, it returns to the ocean to spawn and die. 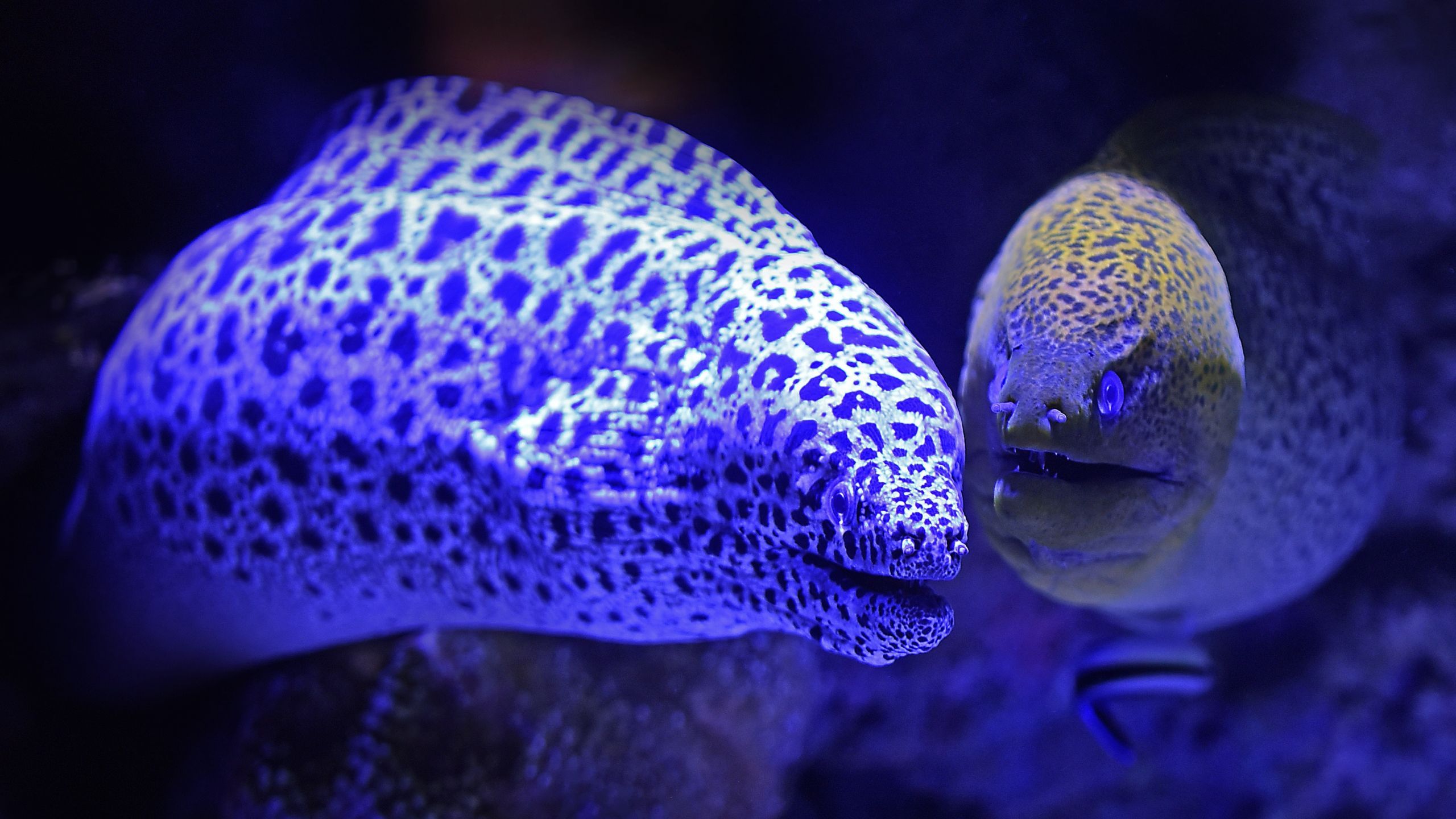 Most eel species are nocturnal. They typically feed at night and hide under rocks, logs and mud of the water’s bottom during the daytime. While most eels are solitary during their juvenile and adult life, some eel species, such as garden eels, live together in vast colonies of several hundred individuals in tropical reef areas.

The lifespan of an eel varies depending on the species. American eels typically live for at least five years, with some reaching 15 to 20 years old. Meanwhile, captive European eels have been reported to live over 80 years, but the species’ lifespan in the wild has not been determined. Typically, when an eel reaches sexual maturity, it returns to the ocean to spawn and die.

Eels face a number of threats including pollution, environmental changes and overfishing. Dams and other mechanisms threaten eel habitat and migration corridors.

The conservation status varies depending on the species. Several species used for commercial purposes are threatened. For example, the European eel (Anguilla anguilla) is listed as “Critically Endangered” due to overfishing, parasites and other human activities like dam creation. The American eel (Anguilla rostrata) is listed as “Endangered.” While they were once abundant in rivers, the construction of hydroelectric dams has blocked their migrations and locally extirpated eels in many watersheds.

Conservation groups are working to protect several threatened eel species. For example, the Zoological Society of London (ZSL) is working to protect the European eel. Their efforts include research, river improvements, public engagement and advising policy.

In 2010, Greenpeace International added the European eel, the Japanese eel and the American eel to its seafood red list. Greenpeace urges commercial fisheries to stop selling species on its “red list” as part of its sustainable seafood campaign. Japan consumes more than 70% of the global eel catch.

Sources: Zoological Society of London, a previous NATURE post and The Nature Conservancy.