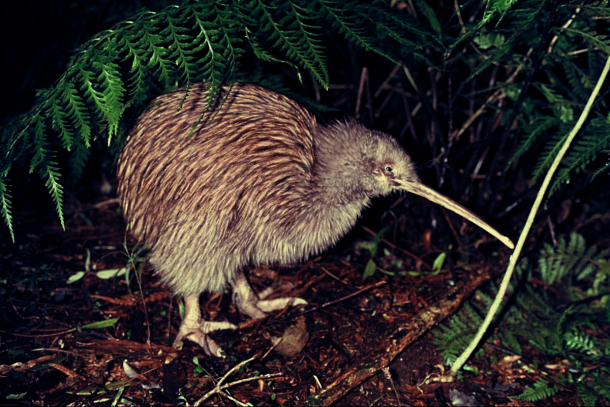 A Southern Brown kiwi photographed in the wild. (New Zealand Department of Conservation)

Which came first: the kiwi or the kiwifruit? Was the bird named for the fruit or the fruit named for the bird? As it turns out, it was the latter. In the 1950s, commercial growers of the “Chinese gooseberry” noticed that their fruit bore a resemblance to an odd little New Zealand bird and a marketing campaign was born. Both are small, greyish-brown and furry. However, whereas the fruit is a nearly perfect ovoid, the bird is outfitted with a long thin beak, goose-like neck and pair of squat but fast legs. The kiwi is also much bigger than the kiwifruit, weighing as much as a hefty laying hen. 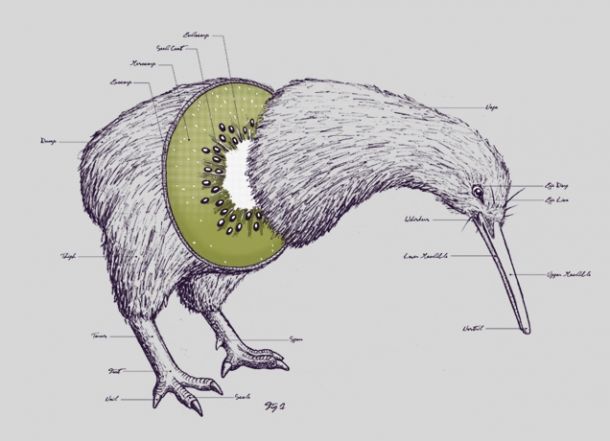 A very inaccurate illustration of kiwi anatomy. (Will McDonald aka McDanger)

The kiwi is the national symbol of New Zealand and with good reason: New Zealand is the only place in the world where kiwis can be found in the wild. There are actually five different species that vary slightly in both size and markings: the North Island Brown (Apteryx mantelli), the Great Spotted (Apteryx haasti), the Little Spotted (Apteryx oweni), the Okarito (Apteryx rowi), and the Southern Brown (Apteryx australis). Four species, the exception being the North Island Brown, are native to New Zealand’s South Island. 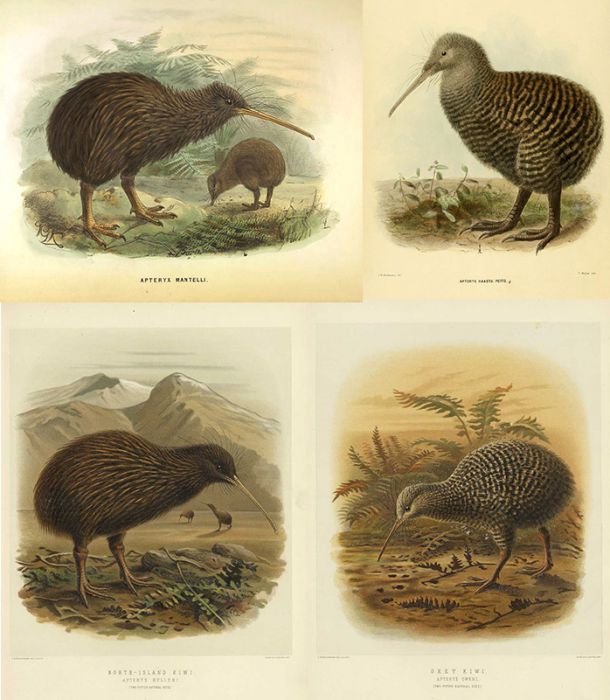 The kiwi belongs to a family of birds known as the ratites, which includes ostriches, emus and rheas. All are flightless, with stubby appendages in the place of wings. The kiwi’s stubs are nearly invisible, buried under a dense coat of fur-like feathers. Like other ratites, kiwis lack the sharp keel found on the breast bone of flying birds where powerful flight muscles normally attach. This gives the breast bone a “raft-like” appearance, which is where the ratites get their name; ratis mean “raft” in Latin.

The ratites vary greatly in size. (NATURE on PBS)

Recent evidence shows that ratites lost the ability to fly much later than we’d previously thought. A 2014 genetic analysis revealed that the kiwi’s closest relative is the extinct elephant bird of Madagascar, not the extinct moa of New Zealand. (Both the elephant bird and moa were avian behemoths standing over ten feet tall, although the elephant bird weighed significantly more). Let that sink in for a moment: two flightless birds, on different islands, literally oceans apart and separated by roughly 7,000 miles, are more closely related than two birds that were found on the same island! This suggests that the various ratite species fanned out across the globe on wings and evolved flightlessness independently, rather than evolving from one flightless species that slowly became isolated due to continental drift. 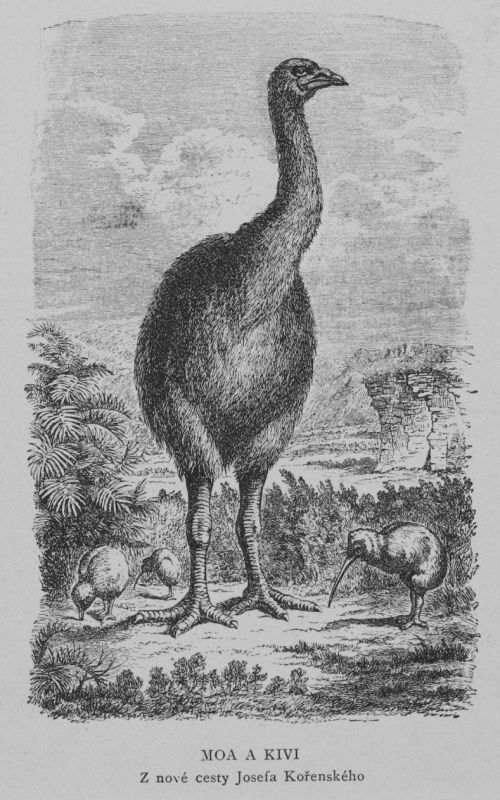 A reconstruction of the moa and kiwi from the Czech-language travelogue “Obrazy z jižní polokoule”, 1902.

A peculiarity of the kiwi’s anatomy are its nostrils, which are located at the tip of the beak rather than the base. This odd arrangement makes more sense once you know how the kiwi eats. It uses its beak to probe the soil and leaf litter in search of insects and worms, which make up the bulk of its diet. Having its nostrils submerged helps the kiwi use its keen sense of smell to detect creepy crawlies. It is also aided by a special vibration-sensing organ found in the tip of the beak that detects movement. Finding food this way doesn’t require keen eyesight, so it may come as no surprise that the kiwi does most of its hunting at night. 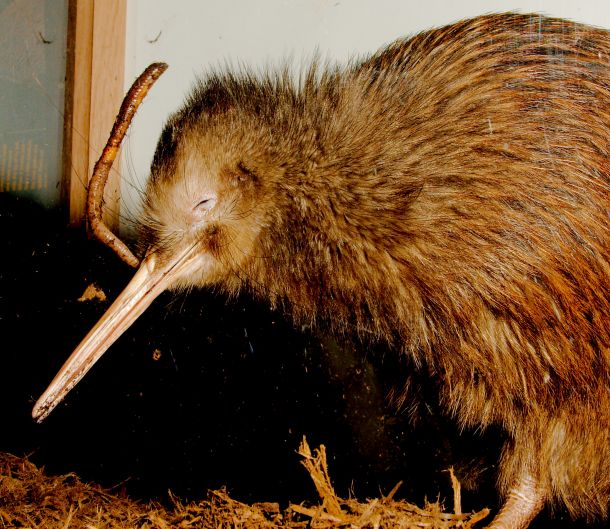 A captive kiwi devours an earthworm. (Josh More via Flickr)

Another bizarre kiwi fact: they lay very large eggs relative to their body size. For example, the average North Island Brown female weighs five and a half pounds, but her egg weighs just shy of one pound, or roughly 17 percent of her total body weight. That’s one of the largest egg to body ratio of any living bird. To put this in perspective, it would be like a chicken laying an egg the size of a grapefruit. Why are kiwi eggs so big? One hypothesis is that over-sized eggs allow kiwi offspring to hatch more fully developed and ready to run from predators. This may have been an advantage at some point in the kiwi’s evolutionary history, when they faced many chick-eating predators and few egg-eaters, who would have feasted on such a large egg. 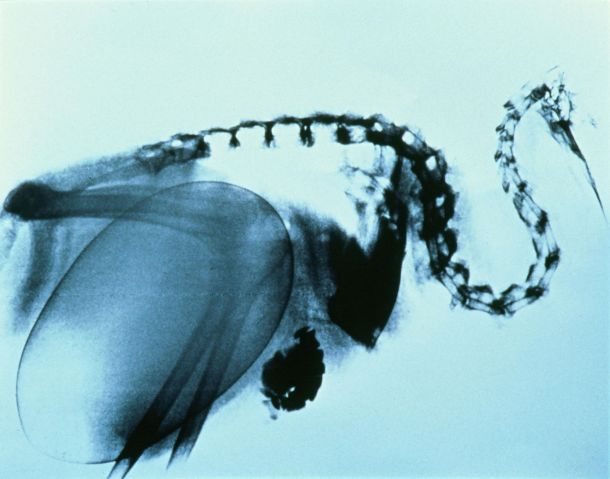 An X-ray of a female kiwi before she lays her egg. (Otorohanga Kiwi House)

Unfortunately, hatching more developed chicks hasn’t helped much against the latest wave of predators. A 1996 study of North Island Brown kiwis found that only five percent of chicks survived into adulthood, largely due to predation. Cats and stoats were the main culprits. The stoat, or short-tailed weasel, was brought to New Zealand by British settlers in the 1880s to reign in an out-of-control rabbit population. Instead, they took a hefty toll on local wildlife, particularly ground and hole-nesting birds. Due to its geographic isolation, New Zealand did not have any mammalian predators until the arrival of Polynesian settlers between 1250 and 1300 A.D. 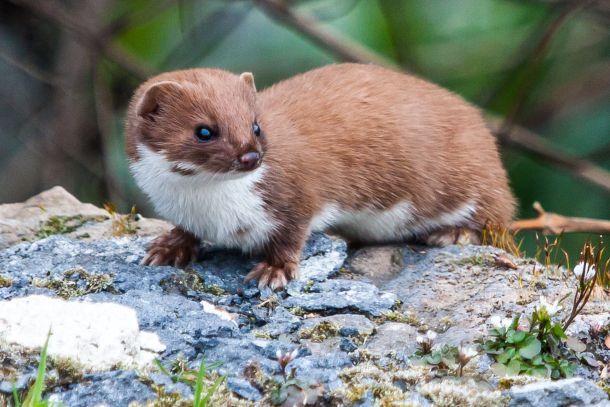 The stoat, or short-tailed weasel, has an appetite for kiwi chicks. (Derek Parker via Flickr)

The isolation of New Zealand’s smaller islands may be the kiwi’s salvation. At least 100 of them have been purged of invasive plants and animals and now serve as breeding grounds for kiwis and other birds such as the kakapo, a flightless parrot. The Little Spotted kiwi (the smallest species whose adult population is vulnerable to cats and stoats) went extinct on the mainland, but clung to life as a transplant on seven off-shore islands. It has been reintroduced on the mainland. Another effort, dubbed Operation Nest Egg, rounds up eggs and chicks and relocates them to island sanctuaries until they are big enough to safely return to the wild. 65 percent of young kiwis brought into the program survive to adulthood, according to the Operation Nest Egg’s website. Only time will tell if these efforts are enough to save these weird and wonderful New Zealand natives. 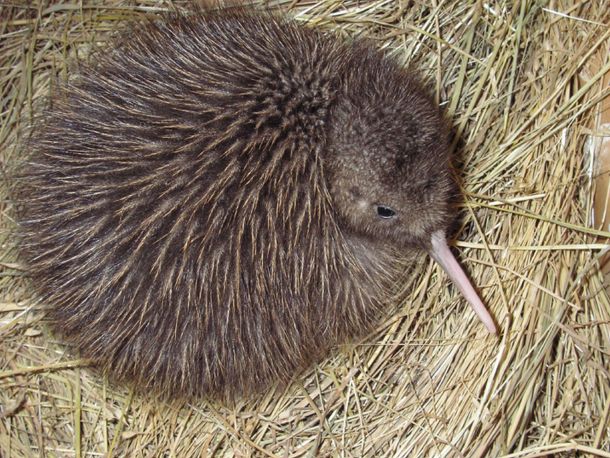 “Why is the Kiwi’s Egg So Big.” Audubon website.
https://www.audubon.org/news/why-kiwis-egg-so-big