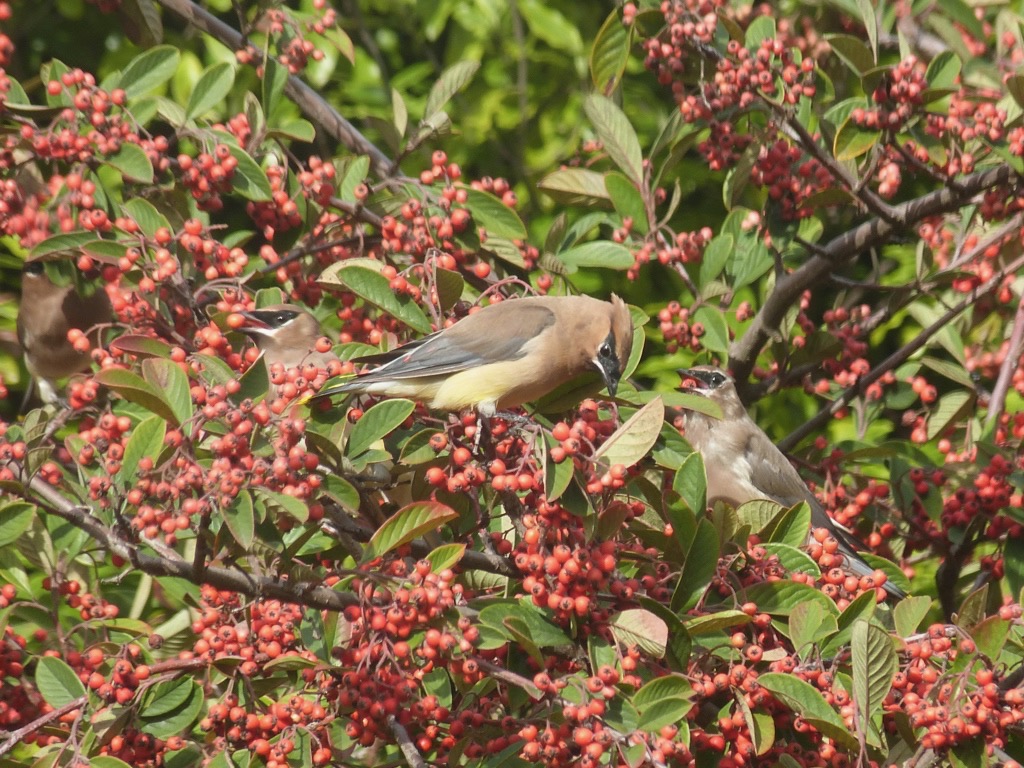 Conservation biologists know that early encounters with wildlife can spark a lifelong love of nature, along with the desire to protect it. They also know that spark often comes from watching birds at backyard feeders. I still recall the thrill of spotting streaks of red fluttering against the snow as cardinals homed in on the feeder my mom filled with seeds throughout the long Pennsylvania winters. It never occurred to us that our efforts to help wild birds survive the winter might have unintended effects on their health, ecology or behavior.

People have thrown birds their field and table scraps for centuries, but the practice changed dramatically after the bird-feeding industry took off in the 1980s. What started as a casual winter pastime became a year-round habit. Americans now spend over $5 billion a year on bird food and feeders, supporting one of the most popular ways to interact with wildlife in the Western world.

The practice will only grow as more and more people move into urban areas, ornithologists say. And although they’ve long studied urbanization’s effects on the behavior and ecology of birds, they’re just scratching the surface of how this “massive supplementary feeding experiment” impacts bird communities. 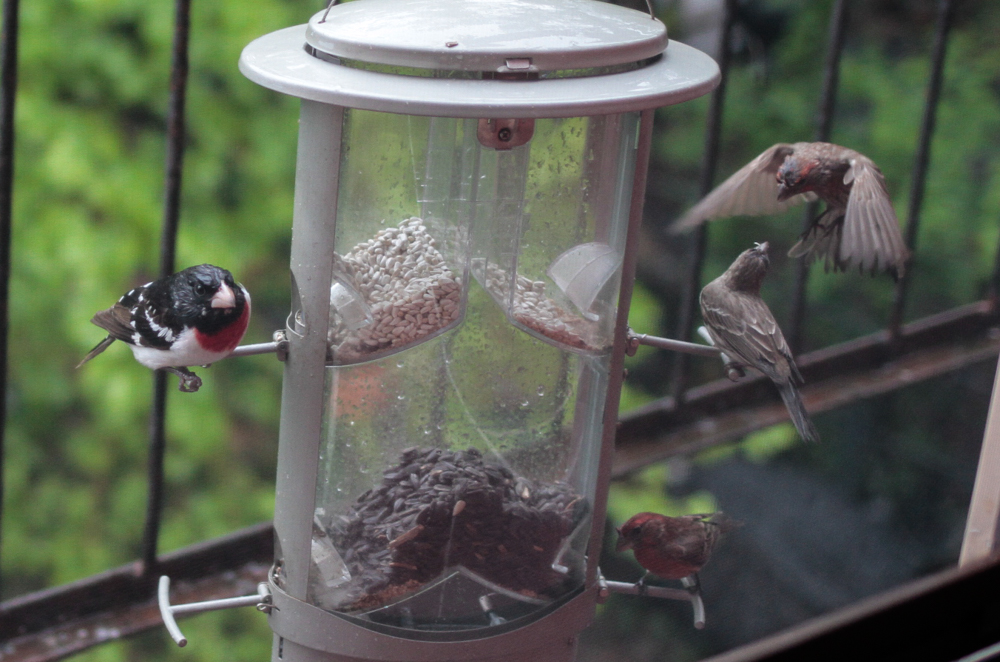 With so many birds threatened with extinction, understanding how supplemental feeding affects them is critically important. At least 40 percent of the world’s roughly 10,000 bird species are in decline, according to BirdLife International’s 2018 State of the World’s Birds report.

Feeding birds in backyards and parks can trigger disease epidemics by attracting high densities of birds, including species that rarely interact in the wild, says Sonia Hernandez, an associate professor of wildlife disease at the University of Georgia. It can also change their behavior.

Ibises in local Florida parks, for example, act much differently than their counterparts in natural areas, says Hernandez. Florida’s iconic long-beaked wading birds, which are declining, followed people into urban areas as ongoing development claimed their habitat. Now they coordinate their time in parks to coincide with peak human traffic to take advantage of handouts, she says.

Birds can quickly succumb to novel pathogens, which they can pick up from feeding nose-to-nose with infected birds or from contaminated feeders.

Pathogens that birds haven’t evolved with can decimate their populations. “From the standpoint of disease acquisition and transmission,” Hernandez says, “having a high density of diverse species that are not related is kind of a recipe for disaster.”

Bird feeders likely aided outbreaks of conjunctivitis among U.S. house finches and goldfinches, after the bacterium jumped from its original poultry host. Feeders may also have fueled epidemics of trichomonosis, an upper-digestive tract disease that’s been linked to declines of greenfinches and chaffinches in the United Kingdom.

Luckily, the popularity of bird feeding offers biologists a chance to enlist enthusiasts as citizen scientists, while encouraging them to feed their feathered friends as safely as possible. 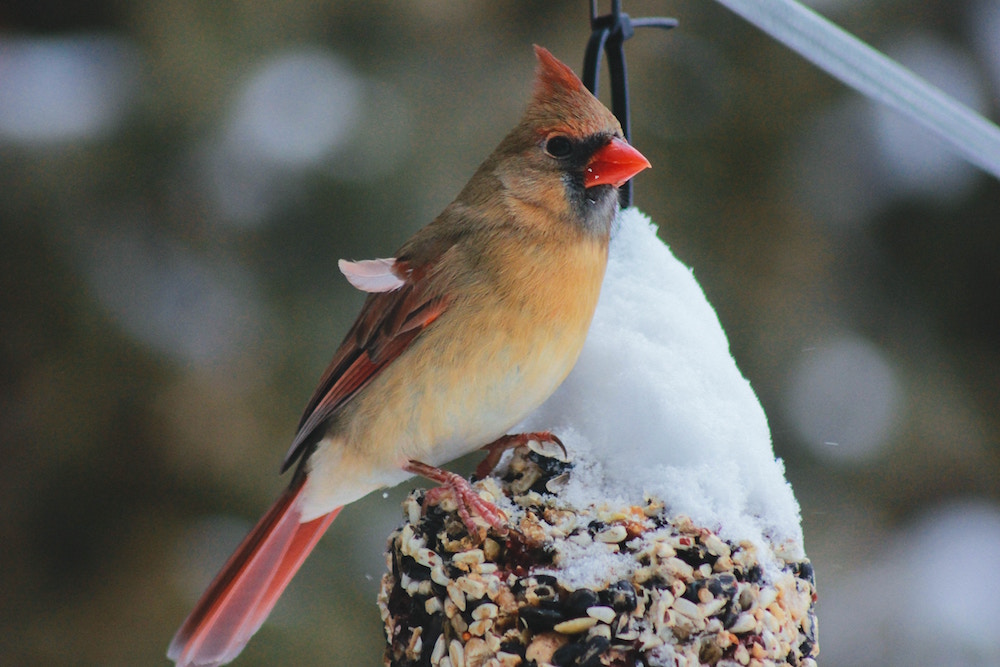 Female cardinal at a feeder in winter. Photo by Erin Wilson

Scientists have long debated whether feeding birds makes them dependent on handouts, but there’s not strong evidence for that, says Jim Reynolds, an ecologist at the University of Birmingham’s Centre for Ornithology in the United Kingdom. Disease transmission is a far bigger risk, but also among the most manageable, he adds.

To prevent outbreaks, Reynolds says, people should clean their feeders regularly and limit the number of feeders they put out to avoid attracting too many unrelated species. Audubon and Cornell’s Project FeederWatch offer tips on feeding and how to create a safe environment — start by keeping cats indoors — and minimize window collisions.

For those who worry about raptors picking off songbirds at feeders, Reynolds sees two choices: stop feeding altogether or accept birds of prey as part of the natural world and an inevitable consequence of feeding. “Sparrowhawks and their breeding success, to my mind, are just as important as that of great tits and blue tits and everything else in people’s gardens,” he says.

Data provided by citizen scientists through Project FeederWatch has helped U.S. researchers determine how birds that frequent feeders are faring. Species that used feeders the most, they found, are doing as well or better than sporadic visitors, which seemed to be facing other pressures such as habitat loss.

Garden feeders often attract birds to nest nearby. Bird lovers can help make their gardens better breeding habitat by planting native vegetation and leaving dead leaves and tree limbs on the ground to provide habitat for the insects that nourish both adults and their nestlings.

It’s likely that many diseases propagated by bird feeders would disappear without feeders, Hernandez says. Even so, she and her colleagues don’t advise people to stop feeding birds.

“We recognize that people don’t have a lot of opportunities to interact with nature,” she says. “Most of us have experienced the powerful impact that coming close to an animal has for people in terms of caring about the environment. We don’t want to take away another opportunity for people to have that contact, and to care.”

Ready to help the birds in your neighborhood? Join a citizen scientist project. Plant bird-friendly native plants and trees.