Fish spend a lot of time in schools, so perhaps it should come as no surprise they’re smarter than most people think. 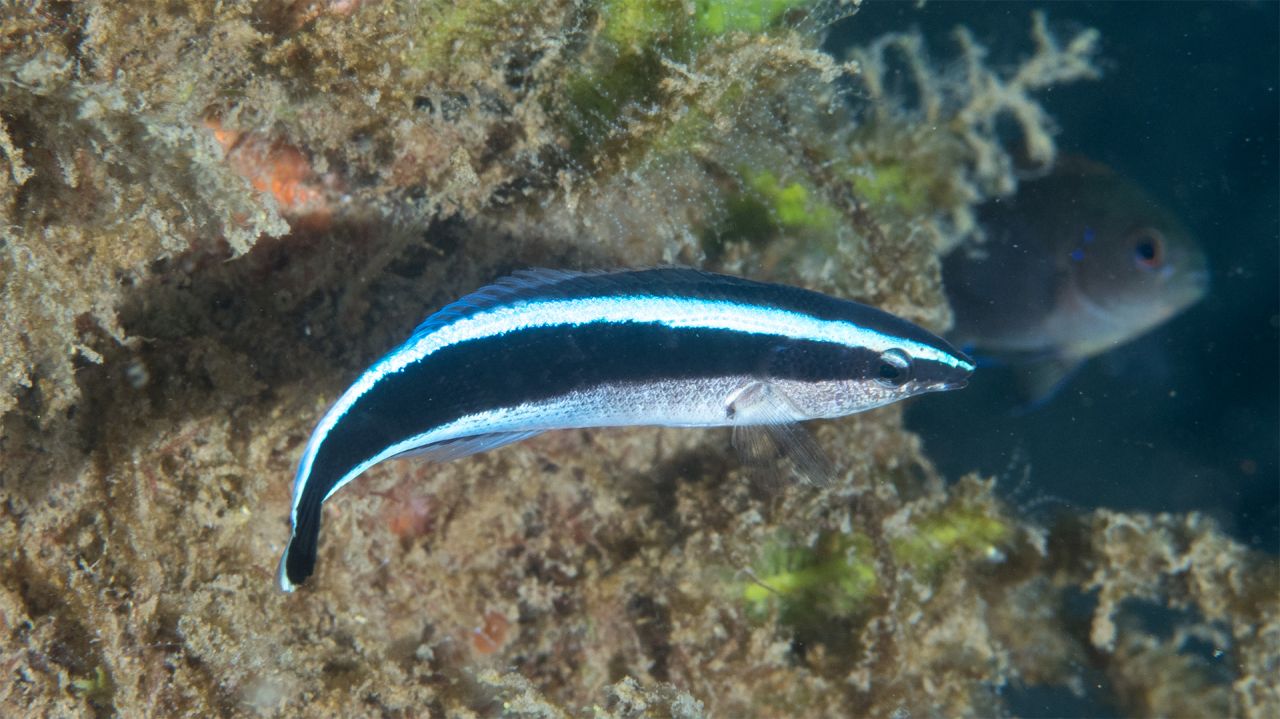 A recent study shows that the cleaner wrasse, a fish that removes external parasites from other fish, responds to its reflection in a mirror. Other research shows that fish can recognize individual human faces, experience pain, and use tools.

An animal investigating a mark on its body that can only be seen in a mirror is considered evidence that it perceives the reflected image as itself. In the study, wrasses attempted to remove marks on their bodies by scraping against hard surfaces after viewing themselves in the mirror. They did not try to remove transparent marks in the presence of a mirror, or colored marks without a mirror, suggesting that they responded to seeing the mark in their reflections. Unmarked fish able to see a marked fish across a clear divider did not try to remove marks from themselves, nor did fish attempt to remove marks placed on the mirror itself.

This type of behavior has been interpreted as self-awareness in many other animals, according to Alex Jordan, a researcher at the Max Planck Institute for Ornithology (MPIO) and senior author on the study. But drawing this conclusion for fish remains controversial.

The journal that published the study, PLOS Biology, even commissioned an accompanying commentary  from Professor Frans de Waal at Emory University. He wrote that, given how evolution works, scientists may need a more nuanced model of the ways animals have a sense of self and respond to mirrors. He felt the wrasses fell short of mirror self-recognition due to “ambiguous behavior and the use of physically irritating marks.”

Yet even de Waal acknowledged that this particular fish has “sophisticated social behavior” and is “not nearly as cognitively simple” as we typically assume fish to be. Perhaps what we really need is a more nuanced way of looking at what we consider smart.

Culum Brown, a biologist at Macquarie University, Australia, sees part of the problem as a significant gap between people’s perception of fish intelligence and the scientific reality. Brown reviewed the current science and reported that it reveals the perception and cognitive abilities of fish “often match or exceed other vertebrates.” Evidence strongly suggests, for example, that fish experience pain in a manner similar to other vertebrates (animals with spines, including fish, birds, mammals, amphibians, and reptiles). After all, fish have all the neurological hardware they need to sense pain. Fish also respond to analgesics (pain relievers) by displaying fewer symptoms of pain, and they appear distracted when experiencing conditions that could cause pain.

Brown also cites research showing that some fish species use tools. For example, certain types of wrasse use rocks to crush sea urchins in order to eat them. Cichlids and catfish have been observed gluing their eggs to leaves and small rocks and carrying them around. Long considered unique to human beings, tool use is now well-acknowledged in chimpanzees, crows and a few other species.

Another study showed that archerfish (Toxotes chatareus) can learn to recognize human face images, a skill that requires distinguishing subtle differences in facial features. The fish could pick a learned human face from a lineup of 44 unfamiliar faces 81 percent of the time, on average.

Other research suggests that cichlid fish recognize other cichlids, discriminating between familiar and unfamiliar individuals as quickly as do primates, including humans.

Allison Davis, a graduate student in The Ryan Lab for Evolution and Function of Animal Behavior at The University of Texas, points out that it is evolutionarily handy for animals to recognize other individuals of their own species. One reason is for mating purposes. But even fish romance can involve more than just recognizing a potential mate. Davis studies a clonal fish that recognizes its own species and a closely related one and uses its cousins to practice something called mate-choice copying – meaning that males prefer to associate with a female adjacent to another male rather than a lone female, and vice versa. In other words, for example, a female is more likely to choose a given male if other females have previously chosen that male. (Humans do this as well, Davis notes.)

At any rate, she says fish are definitely smarter than we give them credit for. “They can do these things because they have to. Think about them as specialists in their own environment.”

Scientists can’t say for sure what level of consciousness any non-human vertebrate possesses, of course. But the evidence suggests that perhaps people should afford fish at least the same level of respect and protection as other animals.

“I don’t think an animal has to be human-like for us to care about its welfare,” Davis says.

Studies show that fish learn from being caught and released, she points out. “That’s not an argument against fishing. I know a lot of fishermen who appreciate the fish more than those who walk into a store and see a fish in a cup and think that’s fine. The point is to bring awareness to what you’re doing.”

Because it turns out that the fish are watching.