Flamingo: a type of wading bird in the family Phoenicopteridae. 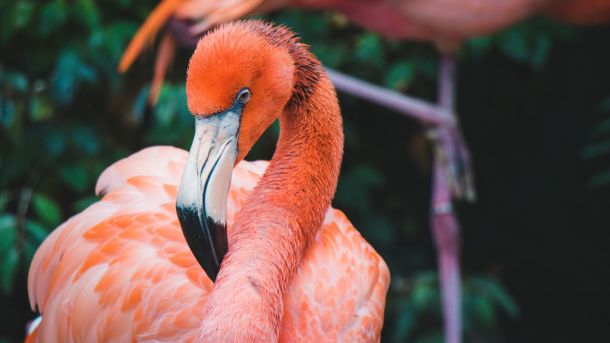 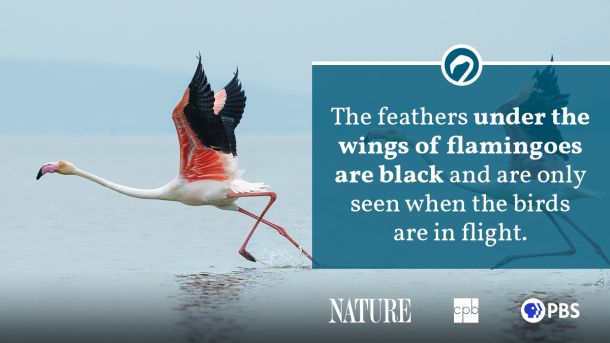 One of the most distinctive characteristics of the flamingo is its pink or reddish coloring. However, flamingoes aren’t born pink. Their coloring comes from the beta-carotene pigments in their food like shrimp or plankton. The brightness of a flamingo’s color depends on how much of these carotenoid pigments they consume. Flamingo feather coloration ranges from pale pink to crimson depending on the species. The American flamingo, or the Caribbean flamingo, is the brightest of the six species. Once a flamingo sheds, its feathers quickly lose their colors.

Flamingoes have long, stilt-like legs that allow them to wade in deep water to look for food. They are often spotted standing on one leg, and while scientists have hypothesized for why, there is not a clear answer for this behavior. Flamingoes are also known for their long, S-shaped necks and strongly hooked bills, both features are adapted for catching prey more easily. 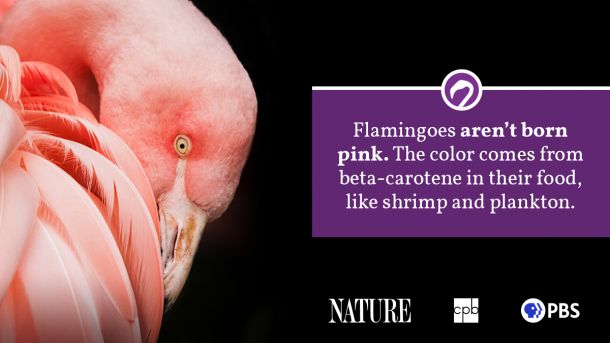 Flamingoes have distinctive eating habits. They feed by holding their large bill upside down in the water. They suck in water and mud at the front of the bill and then pump it out again at the sides. The briny plates in their bill, called lamellae, act like tiny filters, trapping shrimp and other small water creatures for the flamingo to eat. 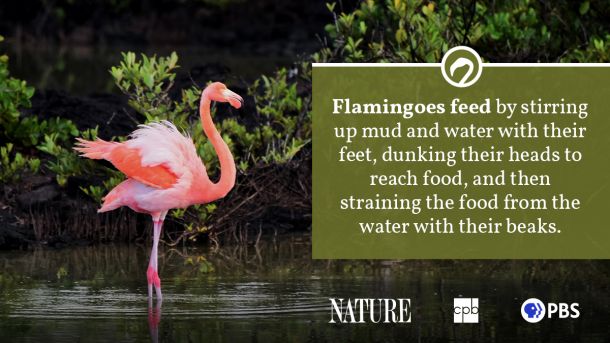 Their habitats include lagoons or large, shallow lakes. These water habitats tend to be salty, in fact, too salty for many other animals. The only other inhabitant of some of their lake habitats include algae, diatoms, and small crustaceans, which are part of flamingoes’ diets.

Flamingoes are found across much of the world, with their location depending on species. The Chilean, Andean, and puna flamingos are found in South America. The greater and lesser flamingos live in Africa, and the greater flamingoes can also be found in the Middle East. The American or Caribbean flamingo is native to Mexico, the Caribbean, and the northernmost tip of South America. 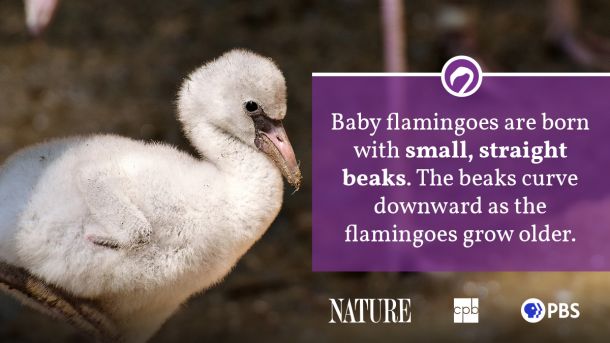 Flamingo courtship rituals tend to be subtle. The female will select a male, and he will closely follow behind her in shallow water. The couple will stay together as long as there is reproductive success. However, the female will find a new male if they are not successful.

The female will typically lay one large, chalky egg in a nest, which is typically a mound of mud ranging from 12 to 24 inches high. It needs to high enough to protect the egg from the elements like flooding and intense heat at ground level. The nest is usually concave and surrounded by a trench to prevent the egg from falling out and from rising waters. Both males and females build the nest by using their bills to pull mud toward their feet. A parent sits on the mound, reaches over, picks up mud, and dribbles it onto the nest.

Once hatched, a flamingo chick has gray feathers and is about the size of a tennis ball. While adult flamingos have curved, black bills, newborns have a straight, pink bill and swollen pink legs, both of which turn black within a week. The chick will stay nears its nest for the first 5 to 12 days, where it will be fed crop milk from both parents’ upper digestive tract. It is believed that the begging calls the hungry chick can stimulate the secretion of the milk, and even foster parents can secrete this milk. During this feeding time, the parents are drained of their color and their plumage turns a pale pink or white. As the chicks become more independent and feed on their own, the parents will gradually gain their bright coats again.

The chick grows and learns quickly. It can swim and walk by the time it leaves its nest. A group of chicks is called crèches, which are looked after by a few adults. The parents will visit the crèches to feed their chicks the crop milk. They can locate their own chick by using a distinct call. 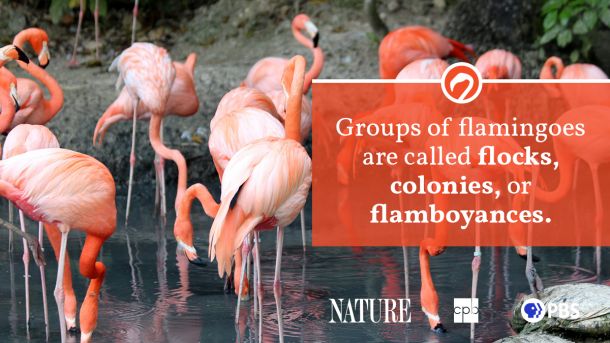 Flamingos are very social birds. They live in groups called colonies, colonies, or flamboyances. These groups range in size from a few pairs to tens of thousands of flamingoes. These large colonies are believed to help flamingoes avoid predators, maximize their food intake, and use scarcely suitable nesting sites more efficiently.

They communicate with each other through vocalizations and displays. Colonies will perform ritualized flamingo displays to stimulate hormone production and most adult birds will breed. Growling, low babbling, and nasal honking are a few of their vocalization sounds. 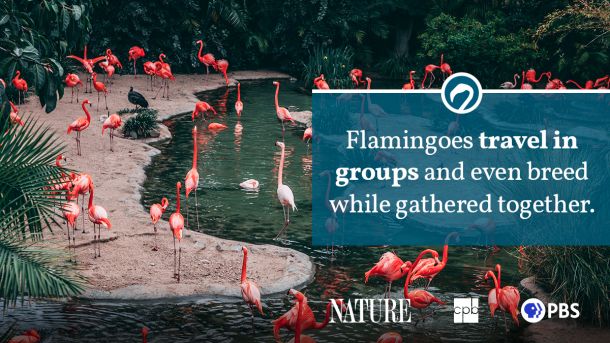 Flamingoes live 20 to 30 years in the wild and up to 50 years in captivity.

Adult flamingoes have few natural predators, as their habitat is not suitable for most animals. However, flamingo chicks may be preyed on by larger birds like eagles. The largest threat to flamingo populations is habitat loss due to human activity and expansion. Flamingoes have been used for food and medicine over the years, which was another threat. Currently, none of the flamingo species are considered endangered. However, some flamingo species have battled population declines.

In 1924, the puna or James’s flamingo was thought to be extinct but was rediscovered in 1957. In 1989, about 100 Caribbean flamingos died from lead poisoning in Mexico’s Yucatan Peninsula after the ingestion of lead shot. This incident led to the prohibition of lead in the region. The rarest flamingo species is the Andean, which can be found in the high mountains of South America. Their eggs are collected by native populations. Humans have expanded into their habitats with farms and infrastructure. 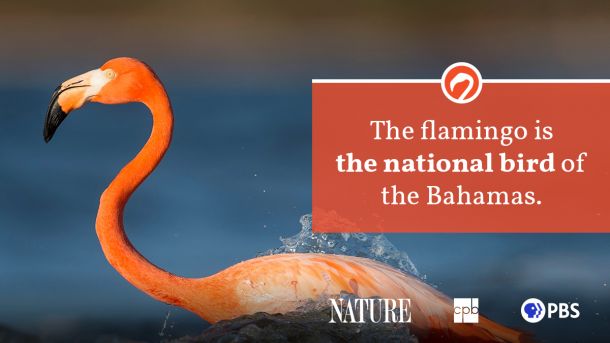 In 1978, the Flamingo Specialist Group was established to study, monitor, and help conserve the world’s flamingo populations. The group works with the IUCN to monitor and survey wild flamingoes. They also develop conservation action plans for species that may be threatened.

In the specific case of the Andean flamingo, which considered the rarest of the flamingo species, local conservation has been established to protect the species. Chile established a national flamingo reserve around one of the lakes used by the birds for breeding colonies and is taking steps to protect other lakes for the flamingos.