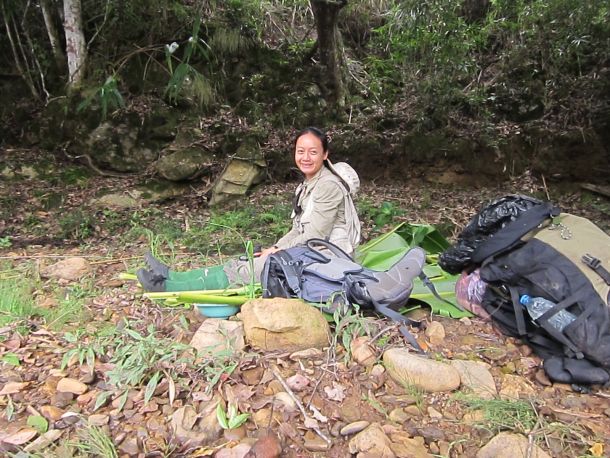 Akchousanh at a lunch break in the forest of Nam Et – Phou Louey National Park during a camera trap survey for biodiversity monitoring. Photo credit: Rasphone 2017

I have been involved in the field of wildlife conservation for more than 15 years and currently serve as the Conservation Science Director for the Lao People’s Democratic Republic (PDR) program at WCS (Wildlife Conservation Society). In that role, I lead and oversee biodiversity monitoring, scientific research, and the technical components of projects at our conservation field sites across the country.

Akchousanh on her PhD graduation day at the University of Oxford, UK, in 2019. Photo credit: Rasphone 2019

My interest in the natural world began as a child exploring the bountiful open spaces around my home in Savannakhet Province. My passion for wildlife conservation and wildlife studies has grown steadily during my time with WCS.

In 2005, I started at WCS as a GIS specialist, which brought me an opportunity to meet and work with various wildlife specialists whose chosen profession I aspired to. Accompanying them to the field led me to my own research project many years later.

Although I began working in the technical field, I was happy knowing that I was part of a nature conservation organization and this experience made me want to be more than a mid-level technician. Over the course of my career, I’ve come to believe that regardless of one’s starting point it is possible to realize your professional goal if you are determined to do so.

In 2013 I undertook a study of clouded leopard (Neofelis nebulosa) in Nam Et-Phou Louey National Park (NEPL NP), Laos, under the support of WCS and Wildlife Conservation Research Unit (WildCRU). The research sought to study clouded leopards and their associated guild species to understand in particular their links with carbon conservation and, more generally, forest conservation. 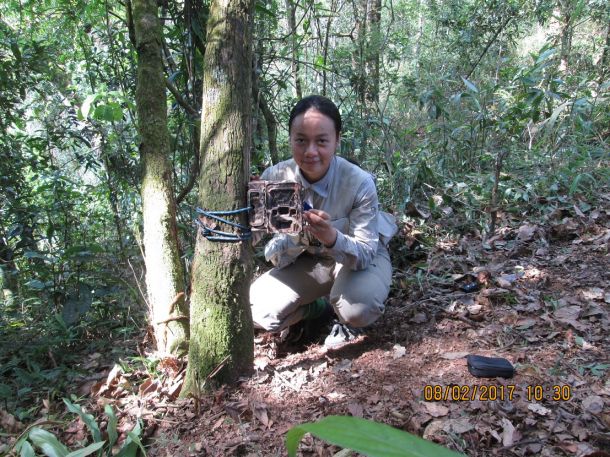 Akchousanh setting up a camera trap on a mountain of Nam Et – Phou Louey National Park in 2017 to survey for carnivores and their prey species (Photo credit: Rasphone 2017)

The study also led to the development of my Ph.D. research with WIldCRU with the primary interest in investigating the intraguild interactions of wild felids and dhole (Cuon alpinus)—an Asian wild dog species—and their impacts on their prey and other smaller carnivores in the NEPL NP. I am currently leading and supporting a number of scientific surveys on white-cheeked gibbons (Nomascus sp.), ground-dwelling mammals and birds, reptiles, and amphibians.

Findings from these studies will be used to support species and habitat conservation at various WCS project sites. I believe that effective protection of any species of conservation concern requires a good understanding of their ecology.

Such an understanding helps us to know better how human-induced changes affect their populations, and how best to reduce such human impacts. I am therefore working hard to establish the scientific underpinnings of practical policy solutions to problems in wildlife conservation. 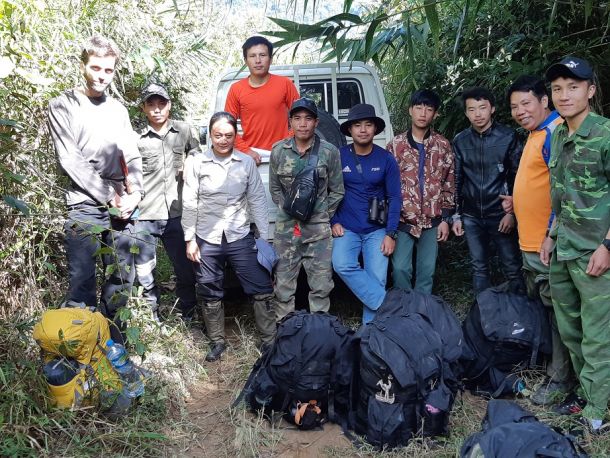 Akchousanh with the team at the entrance to the core zone of the Nam Et – Phou Louey National Park to conduct auditory training and survey for the northern white-cheeked gibbon (Nomascus leucogenys) in October 2020. Photo credit: Rasphone 2020

The greatest challenge to my work is the rapid increase in wildlife and habitat exploitation. It is this, in conjunction with a lack of political will, that too often makes conservation work much harder than it should be. It’s a challenge that has taken its toll on me emotionally at times in my career, but my passion for wildlife and nature conservation helped me to overcome the feeling of despair.

Nature never ceases to fascinate me and I greatly value the services that nature provides to the well-being and health of people everywhere. It is therefore most fulfilling for me to be actively involved in the protection of wildlife and wild places because I know that my contribution goes beyond just saving a few species to serving the planet and its people.