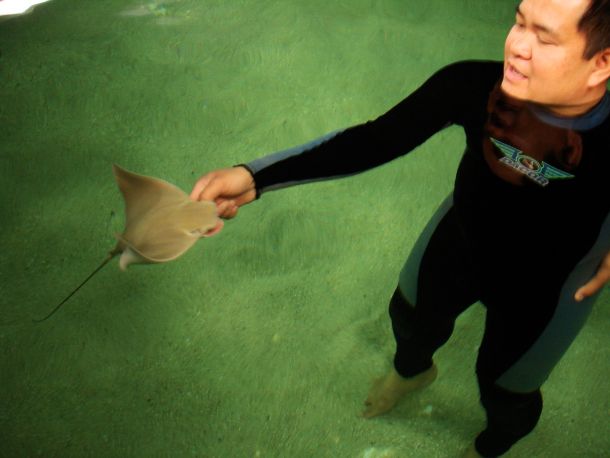 William training a newborn stingray to take food from a diver to prepare it for future success on exhibit with other stingrays. Photo ©William Hana

I grew up on an air force base surrounded by many canals and rivers in Bangkok, Thailand. Water is sacred to Thai culture. The traditional New Year, Songkran, is celebrated by pouring water on Buddha statues and each other to wash away sins and bad luck. Thai also celebrate the Loi Krathong festival at the end of every harvesting season, a tradition of thanking the water goddess for a plentiful harvest and asking for her forgiveness from polluting her water.

The pristine waters were home to many animals including a variety of aquatic invertebrates, fishes, and reptiles.  A scoop with a small net would yield a diversity of fish, snails, and shrimp.  I used to collect small fishes and tried to identify them using a small pocket identifier that my mother gave me for my 6th birthday. The various shoreline structures, terrains, and natural plants provided unique habitats that created a perfect environment for such animals to thrive.

I came to the US when I was 16 and joined the US Army right after high school as a medical technician. After serving in the military, I attended the University of Illinois at Chicago, from which I graduated with a bachelor’s degree in Biological Sciences. 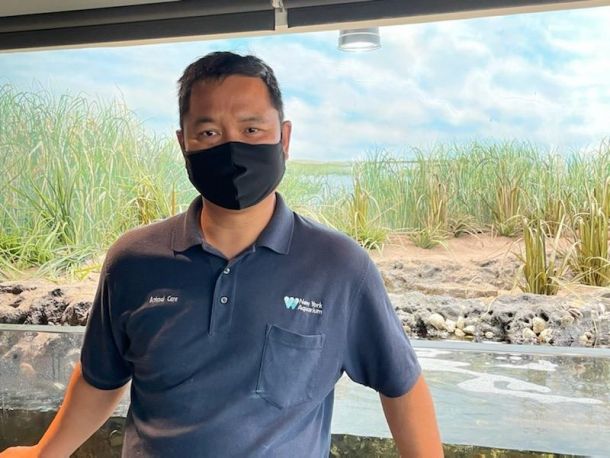 My passion for aquatic animals guided me to apply for a volunteer position in the water quality lab at the John G. Shedd Aquarium in Chicago. With my medical training in the military and schoolwork, I was hired as a medical technician in the Animal Health Department. Later as Quarantine Manager in the Fishes Department, I provided care for animals during their critical acclimation period.

I left Shedd after 20 years to become a Curator of Fish and Invertebrates at the Mystic Aquarium in Connecticut. I continued to promote creating exhibits that have strong conservation messages, including Discovery Long Island Sound, Ornamental Aquaculture, and Weird and Wonderful—where unique fishes educate guests on animal adaptation and the diversity of our natural environments.

I joined WCS’ New York Aquarium in November 2019 as Director of Animal Programs. Working alongside dedicated animal scientists who share the same passion and contribute toward the same goal makes me very proud of WCS. I continue to promote the preservation and awareness of local animals and their habitats by working with local stakeholders, school groups, and governmental agencies. 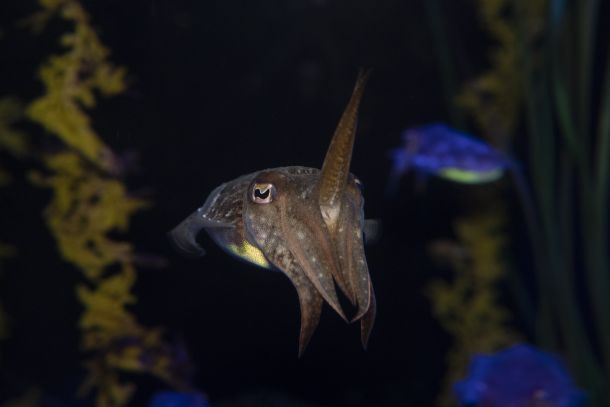 Saving wildlife and wild places worldwide is the core of WCS’s mission to protect and preserve natural environments for all living things and maintain the diversity of life on earth. That vision includes protecting aquatic environments where biodiversity thrives—a goal that is close to my heart. That’s truly what attracted me to WCS, whose global networks and associates give it the ability to do so much for the environment all over the world.

I visited Thailand not long ago. New construction and streets were built over canals and rivers, restricting water flow. I often find myself thinking about a mysterious fish species that lived in shallow stagnant water under my house when I was young. The animals adapted to live in this special environment. The loss of this unique habitat means that the same group of fish has no chance of survival. 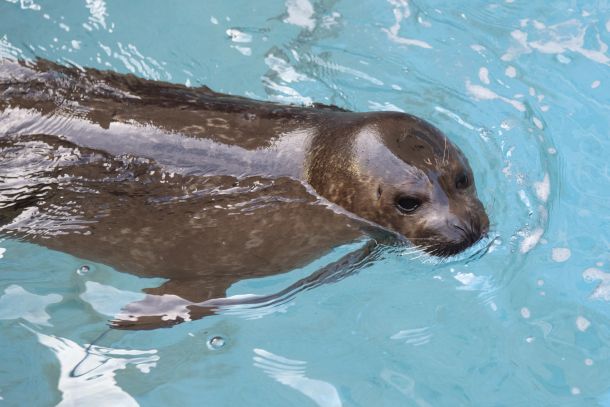 In November 2020, the New York Aquarium welcomed Sidney, a harbor seal pup that had been abandoned by her mother at birth and rescued by the Pacific Marine Mammal Center in California. Photo by Julie Larsen Maher ©WCS

A big part of what I find so fulfilling about my work in the aquarium field is the opportunity to help give a wide variety of marine species a better chance to survive. That is really the essence of conservation. Through public education and conservation of species large and small—from sharks and sea turtles to corals and cuttlefish–the New York Aquarium is encouraging and enabling millions of people to become caretakers of our ocean.

As a WCS team member, I am working to protect marine biodiversity by sharing my knowledge and passion with our visitors. I can reach out to others across the globe and help share their stories and contribute to their efforts to preserving wildlife and wild places. And by doing this work, I continue to pay tribute to the water goddess we celebrate during Loi Krathong, and in whose name we commit ourselves to the protection of our planet.