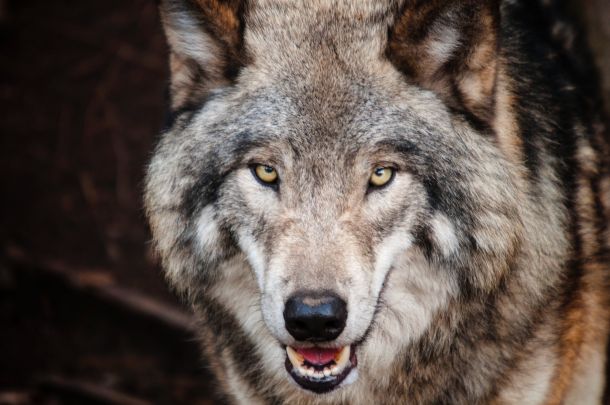 The gray wolf is a common motif in Eurasia and North America, corresponding with the wolf’s geographic location. As a predator, the wolf is strongly associated with danger and destruction. In modern society, the “Big Bad Wolf” is a common trope due to threats it poses to both humans and livestock. However, early human societies that hunted to survive admired the wolf and tried to mimic its habitat. The wolf remains an important figure in nomadic groups’ culture and religion in both Eurasia and the North American Plains, but the best known cultural contribution is that of household dogs: wolves were domesticated several thousand years ago, and selective breeding produced dogs as pets.
In fables and literature, wolves have been portrayed as dangerous and deceitful. Greek Storyteller Aesop featured wolves in multiple fables, including his most famous, “The Boy Who Cried Wolf.” The phrase “to cry wolf” was derived from this fable, which is directed at those who knowingly raise false alarms. The Bible contains numerous references to wolves, where they are typically used as a metaphor for greed and destruction.
Later, in 1697, the tale of “Little Red Riding Hood” further tarnished the wolf’s reputation in the Western world. Over time, the wolf continues to appear as the villain. The negative connotation of wolves in modern times contributed to wolf populations’ rapid decline in North America, Mexico and most of Europe, although efforts like Yellowstone Wolf are helping re-wild and re-introduce gray wolves to place they belong.
Read on for more information about gray wolves. 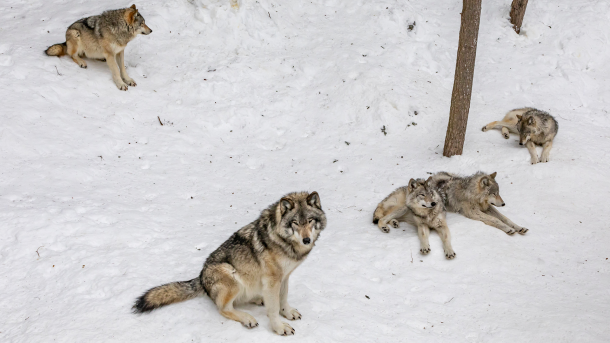 Photo by Eva Blue on Unsplash.

Size and Weight: A northern male wolf is about 6.6 feet long, including the bushy tail, and it stands about 30 inches tall at the shoulder. On average, it weighs about 100 pounds, but it can range from 31 to 143 pounds. Females average about 20 percent smaller than males.

The size of the wolf depends on its geographic location. The largest wolves are found in west-central Canada, Alaska, and across northern Asia. The smallest tend to be near the southern end of their distribution in the Middle East, Arabia, and India.

Fur: Fur on the upper body, though usually gray, may be brown, reddish, black, or whitish, while the underparts and legs are usually yellow-white. In the arctic region, light-colored wolves are common.

The wolf has very dense and fluffy winter fur. The winter fur is highly resistant to the cold. Wolves in northern climates can rest comfortably in open areas at minus 40 degrees Fahrenheit.

Diet: Wolves are natural-born predators and are well-equipped to take down prey. They have keen senses, large canine teeth, powerful jaws and the ability to run at 37 miles per hour.

Gray wolves typically hunt and move overnight, especially in area with a high human population. Their main prey are large herbivores, including deer, elk, moose, bison, bighorn sheep, caribou and musk oxen. When available, wolves will hunt beavers and hares. Canadian wolves will fish for Pacific salmon. Once they successfully make a kill, the pack will gorge and linger. They typically consume 7 to 20 pounds per an animal.

Habitat: Wolves can be found from the tundra to the woods, forests, grasslands, or even deserts. Their presence is dependent largely on the availability of prey.

Typically, a wolf pack’s range will be between 80 and 300 miles, depending on the number and spread of prey. In regions with extreme climate, such as the arctic, the pack’s territory can span over 1,000 square miles.

Geography: The gray wolf inhabits vast areas of the Northern Hemisphere, spreading from North America to Eurasia and into the Arctic regions.

Lifespan: Wolves can live up to 13 years in the wild, though few survive to that age. On average, they live from 6 to 8 years.

Pack Behavior: Gray wolves typically live in packs of 6 to 10 individuals, but the pack can include up to two dozen wolves. A pack is a family group with an adult breeding pair (the alpha male and alpha female) and their offspring at all ages. Wolves form strong social bonds with each other, allowing them to form the wolf pack.

The alpha female and alpha male lead the pack and guide the group’s activities. While the female predominates in roles like care and defense of pups, the male predominates in foraging and food provisioning. Both males and females are active in hunting and killing prey.

Breeding: Wolves usually breed between February and April, typically between the alpha male and alpha female. The female will give birth to a litter of about 5 to 6 pups in the spring, following the two-month gestation period. The pups are born in a den consisting of a natural hole or burrow. They are cared for by all members of the pack and are the center of attention of the pack during the early months in spring and summer.

By October or November, most pups are almost adult size. After two or more years in the pack, they may leave to find a mate, establish a new territory or form their own pack. Wolves that stay with their own pack may replace their parent as the alpha, or breeding member of the pack.

Conservation Status: According to the International Union for Conservation of Nature (IUCN), the gray wolf is considered of least concern.

Threats: Other than man, wolves have few natural enemies. Humans are the leading cause of deaths for wolves in most areas of the world. However, in areas with high wolf density and declining prey population, other wolves and starvation are major causes of death.

Canine parvovirus, distemper, rabies, blastomycosis, Lyme disease, lice, mange, and heartworm are among the diseases and parasites that affect wolves.

Information is pulled from Encyclopedia Britannica and American Expedition.